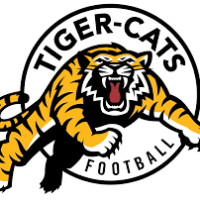 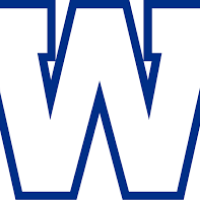 Interception! With 11 seconds on the clock left, the Bomber offense will come in to line up in victory formation.
9:46 PMa year ago

The Tiger-Cats recover the ball after stopping Winnipeg after three downs. The clock no longer enough to aspire to a comeback.
9:42 PMa year ago

The Blue Bombers cause another turnover on downs for the Tiger-Cats and, with less than two minutes left, will try to run down the clock.
9:38 PMa year ago

Medlock comes in and puts the football between the uprights with no trouble.
9:32 PMa year ago

Evans loses the ball before his arm motion was forward, and the Blue Bombers have another chance to finish it off!
9:27 PMa year ago

A new field goal to make it a three possession game.
9:26 PMa year ago

The officiating team determine that the Bailey did not have posession of the football when landing.
9:24 PMa year ago

Bailey with the catch on the end zone! The Blue Bombers increase the lead.
9:22 PMa year ago

Harris rushes and gets a first down from a 2nd & 12. Winnipeg closing in on the victory.
9:16 PMa year ago

Demski rushes to Hamilton's 38 on the first down. He's just short of ten yards, but keeps the clock moving.
9:08 PMa year ago

Winnipeg with possesion on midfield. Long ball from Evans to Jones, but he's unable to keep it.
9:01 PMa year ago

An easy field goal for Medlock. The advantage is 15 with one quarter to go.
8:56 PMa year ago

The two-point conversion fails. The difference is 12 with three minutes to go on the third quarter.
8:54 PMa year ago

Quick pass to the left for Addison who rushes and scores!
8:52 PMa year ago

Hamilton on the 23 yard-line of Winnipeg with a first down!
8:47 PMa year ago

The Bombers unable to advance in this possession. They punt and the Tiger-Cats will have another chance to close the gap.
8:42 PMa year ago

Turnover on downs! The Winnipeg stop the rush from the TiCats just inches before reaching the first down mark.
8:40 PMa year ago

The lead increases to 18 after Winnipeg's first possession of the second half.
8:33 PMa year ago

The Bombers will recieve the ball to get this second match underway!
8:24 PMa year ago 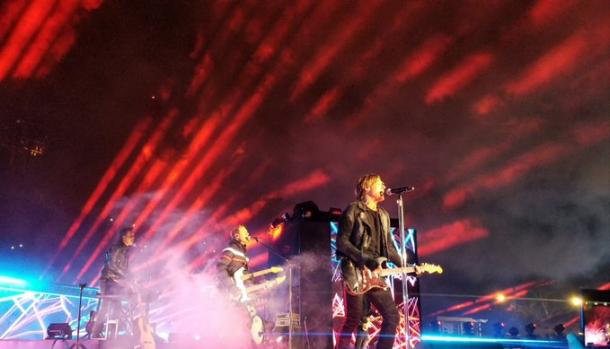 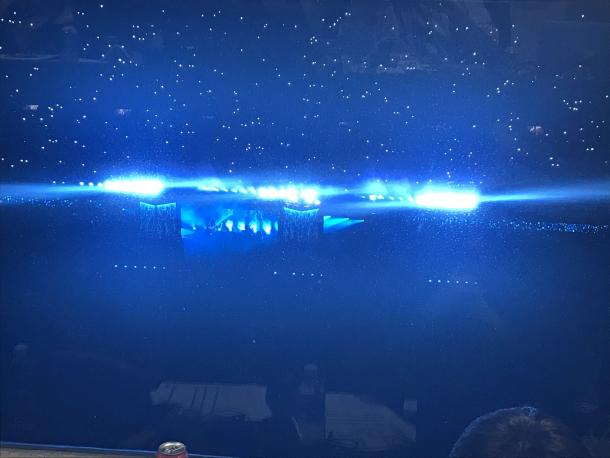 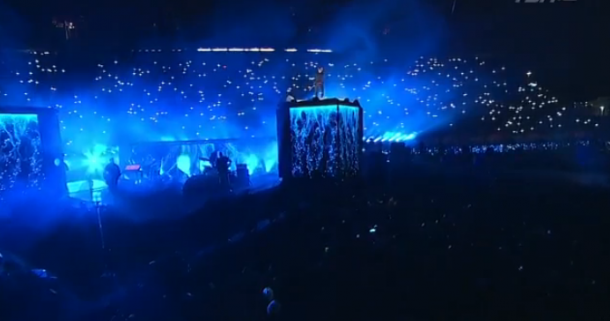 We go to the half with advantage for Winnipeg with a better executionof their gameplan.
7:52 PMa year ago

The lead increases to 15 points with little time before half-time!
7:49 PMa year ago

Cullaros with the pass to Bailey for another first and ten. This time it's on the 10 yard-line.
7:46 PMa year ago

The Bombers once again in Hamilton's own 22 yard-line and a first down.
7:41 PMa year ago

TiCats have to punt. The Bombers will have another chance to augment their lead before half-time.
7:38 PMa year ago

Mike Jones almost with another interception for the Bomber defense, but he fails to hold on to it.
7:33 PMa year ago

Andrew Harris with the reception to make the lead bigger for the Bombers!
7:32 PMa year ago

Harris with a 22-yard rush to place Winnipeg on the opposing 17 yard line.
7:25 PMa year ago

Another three points by the Bombers. The lead is again of 5 for Winnipeg.
7:22 PMa year ago

Great catch for Harris to earn another first down for the Bombers.
7:17 PMa year ago

Hajrullahu puts three more points on the scoreboard for the TiCats
7:12 PMa year ago

End of the 1st Quarter

The TiCats gain a first down on Winnipeg's 40 yard line.
7:08 PMa year ago

Turnover on downs for the TiCats. It'll be ball for Winnipeg once more.
7:02 PMa year ago

Lawler catches a pass on the TiCats' 45 yard-line
6:57 PMa year ago

Banks recieves the ball and is tackled inside Winnipeg's 40-yard lline.
6:54 PMa year ago

Williams returns the ball to 31 yard-line
6:51 PMa year ago

Andrew Harris with the 15-yard rushing touchdown!
6:50 PMa year ago

Evans can't hold on the ball when hit and it'll be a fumble recovered by Winnipeg!
6:49 PMa year ago

Jefferson penalized for innecessary roughness on the QB Sack!
6:45 PMa year ago

Winnipeg is unable to get anything out of their first offesive. They will punt the ball.
6:43 PMa year ago

Alexander with the first interception of the game! It'll be Winnipeg's ball!
6:42 PMa year ago

Williams returns the ball to 30 yard-line!
6:41 PMa year ago

The game is underway at McMahon Stadium. The 2019 CFL champion is now being decided.
6:35 PMa year ago

The Canadian National Anthem is interpreted by Lindsey Kelly from the Young Canadians and members of the Armed Forces.
6:30 PMa year ago

Winnipeg wins the coin toss and decides that Hamilton will recieve the ball first.
6:27 PMa year ago 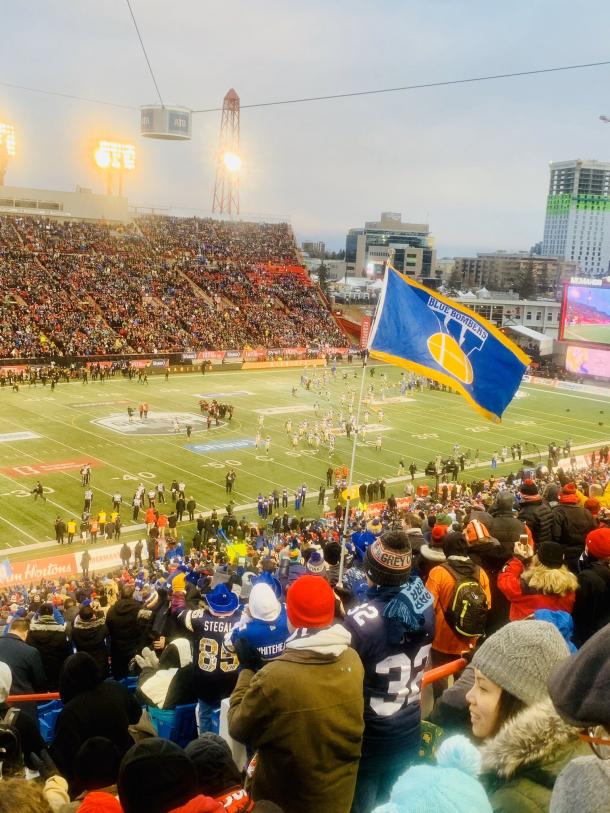 Bombers step out on the field!

Winnipeg is recieved with a huge pop by their fanbase as they come out for this 107th Grey Cup!
6:22 PMa year ago

The Hamilton side steps out onto the field ready to end their draught!
6:18 PMa year ago

The Grey Cup is here! 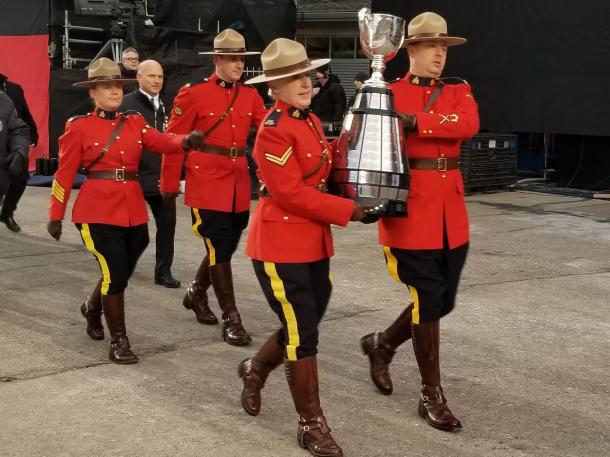 All set for the Opening Ceremony at the 107th Grey Cup! 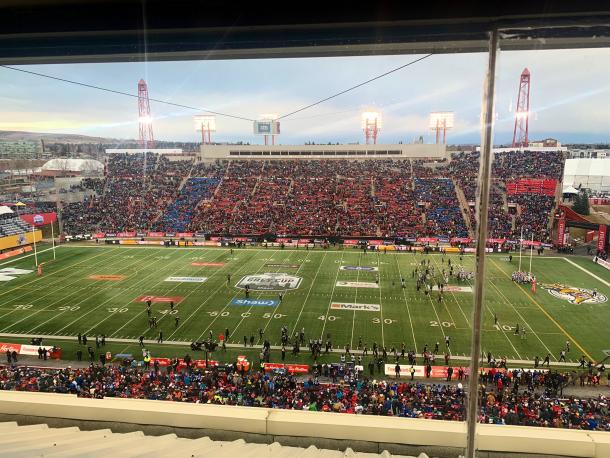 6:04 PMa year ago
Very windy and a 3ºC environment tonight at Alberta. Let's see how this affects the movement of the football. 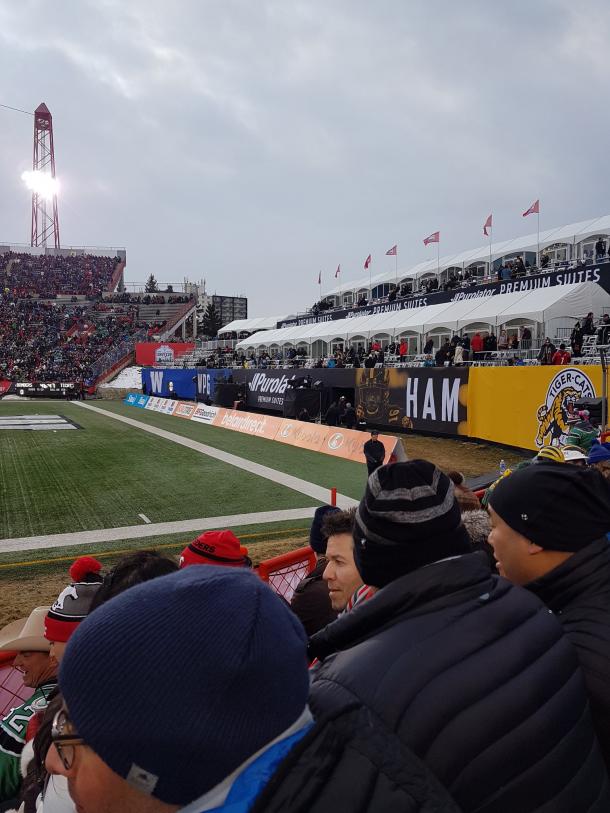 The Bombers fanbase is showing all their support

McMahon Stadium all dressed up for the ocassion! 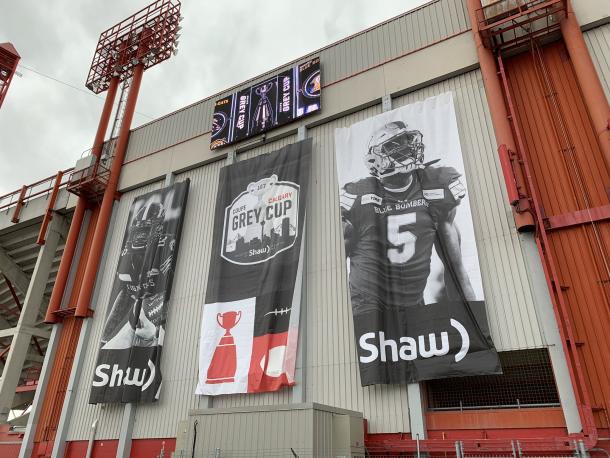 5:48 PMa year ago
The squads have started with their warm-ups in McMahon Stadium. 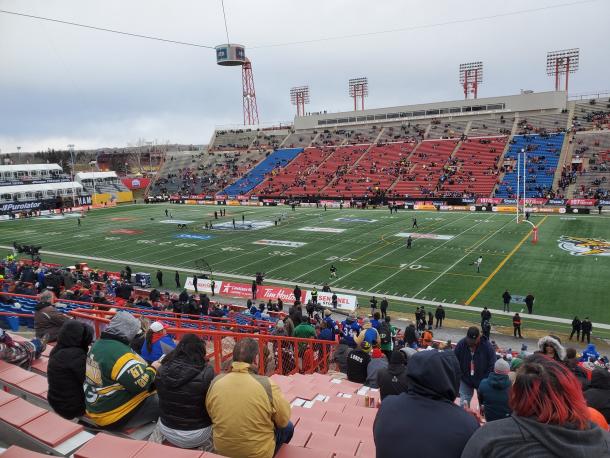 Both teams are pumped for the match!

It’s all starts from the handshake 🤝 #FortheW #GreyCup pic.twitter.com/xWJogXINvH

The Bombers getting some motivation from their fans!

The Ti-Cats are ready to go!

The expected lineup for the Bombers! 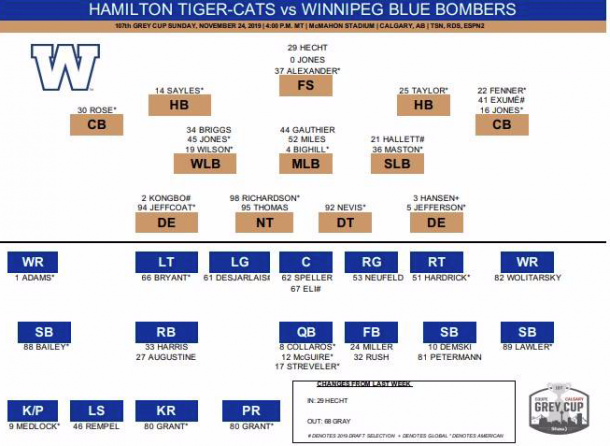 The expected line up for the Tiger-Cats! 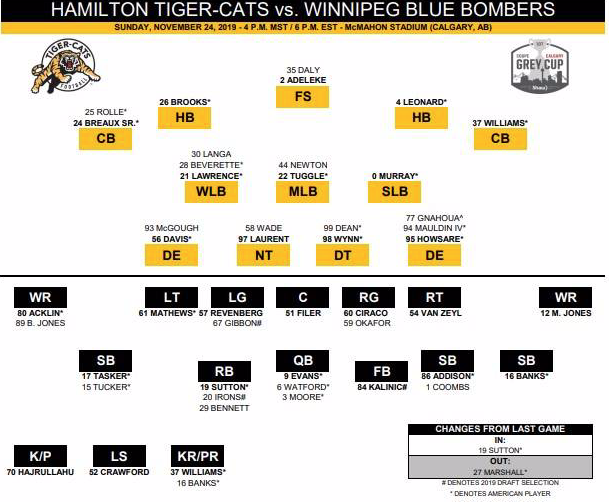 It's all about the Grey Cup tonight!

In the first round of the playoffs, the Bombers defeated the Calgary Stampeders by a 35-15 margin.

On the next round, Winnipeg played the Western Final against their rivals Saskatchewan Roughriders. They defeated the Riders 20–13 to win the Western Division for the first time since 1984. 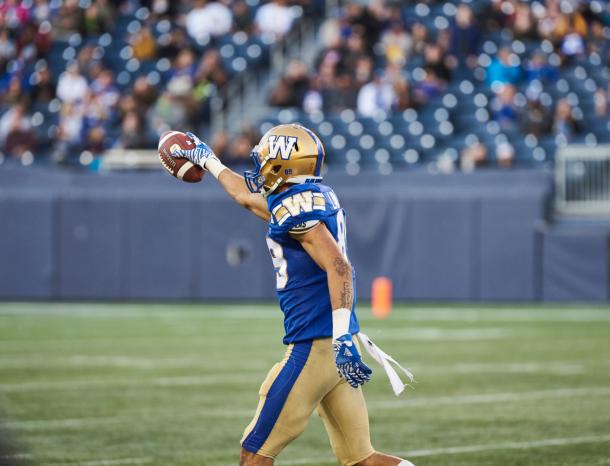 After finishing top of the East Division, the TiCats received a bye in the first round of the playoffs and hosted the Edmonton Eskimos in the Eastern Final. Hamilton won the game 36–16 to win the division title for the first time since 2014. 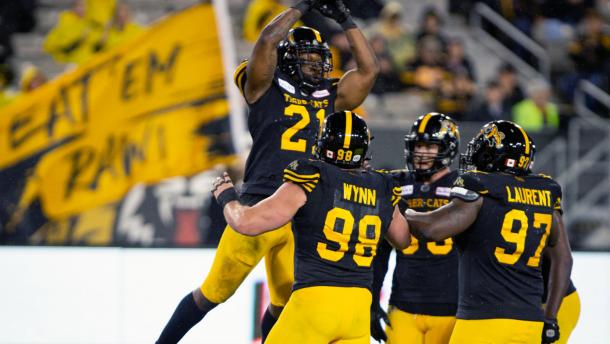 The highest rated officials of the season will get a chance to work today!

The Tiger Cats are also hyped to try to reach another title!

The Blue Bombers are motivated for the game!

On Sunday, we do this FOR THE W.

Tonight's performance at the break will be by Keith Urban! 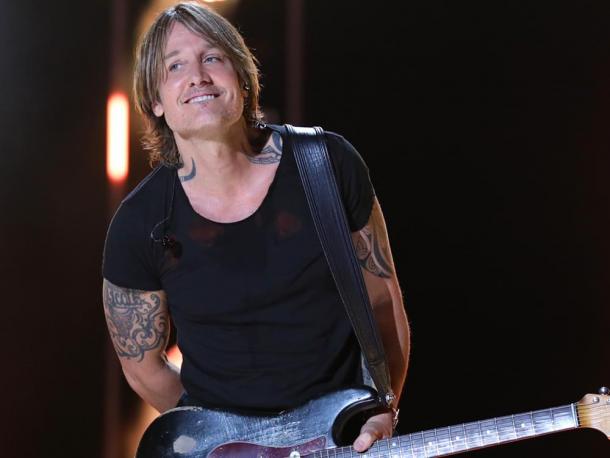 Who will break the negative streak?

Tonight's 107th Grey Cup will feature the only two teams in the CFL to not win the the trophy in the 2000s.

The Tiger-Cats won the Grey Cup most recently in 1999, while  the Blue Bombers' last victory came in 1990.

If you want to watch the game on TV, your options are TSN (Canada) and ESPN2 (USA).

If you want to directly stream it CFL's streaming service.

test3 a month ago

John Herdman announces roster for Canada's&nbsp;friendlies against Barbados and Iceland a year ago

2015 Gold Cup: Is There Hope Amid Despair for Canada? 6 years ago

The Next Step For The CFL: Expansion 6 years ago
Restore your password
Please enter your user name or email.
Login Member or Writer Panel
Enjoy your own Customized Newspaperwith VAVEL topics' carousels!