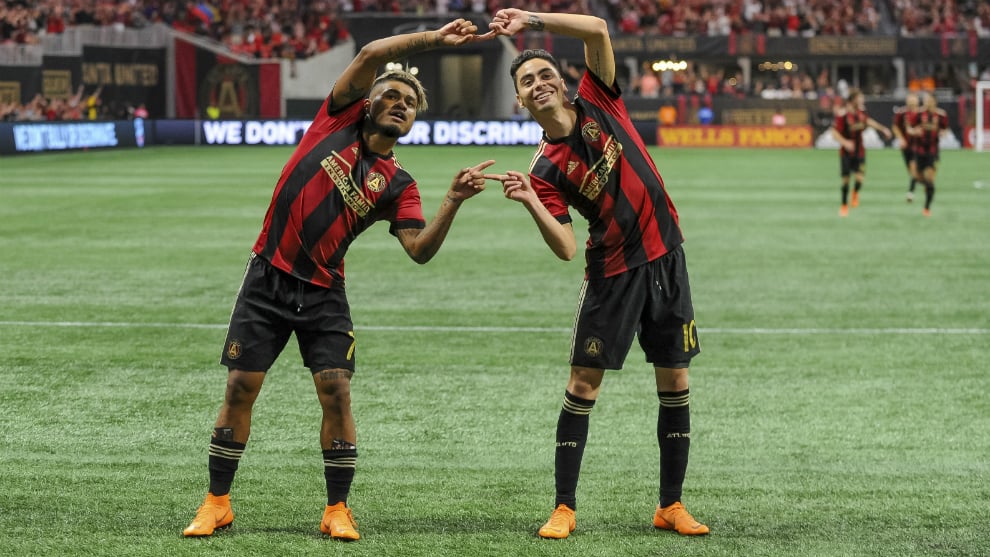 Atlanta United FC compete in the Major League Soccer (MLS) and play in the Eastern Conference. They were founded on April 16, 2014 and were the 22nd MLS Franchise Club. Atlanta play their home games at the Mercedes-Benz Stadium, which they share with NFL side, the Atlanta Falcons.

Atlanta United’s first ever goal was scored by Yamil Asad in their MLS debut match against New York Red Bulls, in a game they lost 2-1.

In their inaugural season (2017), Atlanta finished fourth in the Eastern Conference and fourth overall. They lost their debut game 2-1 to New York Red Bulls, but bounced back in style in their next game when they beat fellow expansion side, Minnesota United 6-1. During the season, they became tied for the biggest win margin in a game when they beat New England Revolution 7-0 on September 13, 2017. They qualified for the playoffs but were defeated 1-0 in the knockout round to Columbus Crew. They were knocked-out of the U.S. Open Cup by USL Championship side Miami FC 3-2. Josef Martínez finished the clubs top goalscorer with 19 goals.

Atlanta’s second season (2018) saw them win their first trophy in the franchise history. They finished second in both the Eastern Conference and overall standings and qualified for the playoffs. They faced by New York sides on the way to the final, beating New York City FC 4-1 in the Conference semi-finals and New York Red Bulls 3-1 in the Conference finals. In the MLS Cup Final, they faced Portland Timbers and beat them 2-0 curtesy of goals from Josef Martínez and Franco Escobar. Atlanta also set the record for the highest attendance in MLS history during this game when 73,019 fans attended. Atlanta qualified for the CONCACAF Champions League for the first time in the franchise history. They were not as successful in the U.S. Open Cup, as they were knocked-out in the round of 16, when they lost 1-0 to Chicago Fire. Josef Martínez finished the clubs top goalscorer for the second season in a row and also won the Golden Boot award in the MLS, scoring 31 goals during the season (a MLS record at the time, until Carlos Vela broke the record in the 2019 season with 34 goals).

The 2019 season saw a change in management, as head coach Gerardo Martino left Atlanta and became the new Mexican National team coach. Atlanta signed former Ajax and Barcelona star Frank de Boer as their new manager. de Boer guided Atlanta to a second-place finish in the Eastern Conference and third place in the overall standings. Atlanta were unable to defend their MLS Cup as they were defeated 2-1 in the Playoff Conference Finals 2-1 by Toronto FC.

Atlanta’s first trophy of the season came on August 14, when they won the Campeones Cup. The winner of the previous MLS season plays the winner of the Campeón de Campeones from Liga MX in Mexico. Atlanta beat Club América 3-2 in the final. Atlanta’s second trophy of the season came only 13 days after their first, when they won their first U.S. Open Cup in the 2019 season, when they beat Minnesota United, 2-1 in the final. Their debut in the CONCACAF Champions League saw them reach the quarter-finals. They came back from 3-1 down to beat Costa Rican side Herediano 5-3, in the round of 16 but were knocked-out by eventual winners Monterrey. During the 2019 Josef Martínez made his way into the MLS record books when he scored in 15 consecutive games.

The number 17 was retired by Atlanta United on February 10, 2017. It was retired and dedicated to the fans to signify their support and passion for the team. The number 17 signifies their first season as an MLS team (2017). It was originally given to Josef Martínez, who wore the number for the majority of his career but when asked to give up his number he was more than happy too as it was ‘for the people of Atlanta’.

Atlanta United 2 are the reserve team for Atlanta. They play in the second tier of American Soccer in the USL Championship. The reserve team was founded on January 9, 2018. It was created to help ‘bridge the gap’ between Atlanta’s youth teams and the first team.