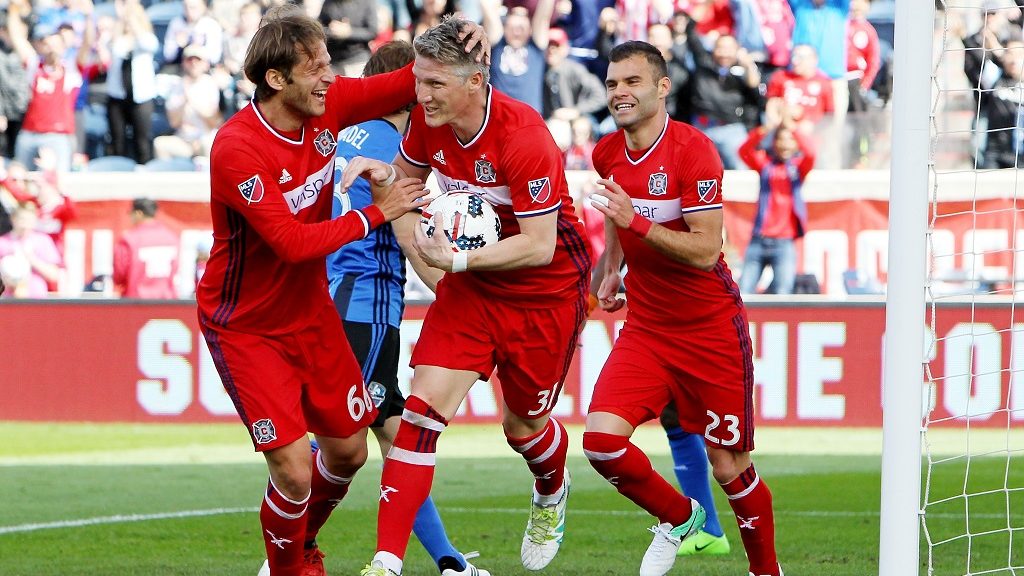 Chicago Fire Football Club was founded on October 8, 1997 and are a member of the Eastern Conference in the MLS (Major League Soccer). However, they originally played in the Western Conference until 2011. Their name originated from the historic Chicago fire in 1871. They were one of the first MLS expansion teams in 1998 along with Miami Fusion. They play their home games at Soldier Field in Chicago, Illinois.

They hired Bob Bradley as their first head coach and signed Polish national team captain, Peter Nowak who was their first international player. Chicago’s first trade in their organisation was Jess March, who became a key figure in Fire’s history, making 260 appearances in all competitions and scoring 23 goals and making 33 assists.

Chicago Fire’s inaugural season was one for the history books and started by beating fellow expansion team Miami Fusion in their debut match 2-0. The Fire also won their debut home match against Tampa Bay Mutiny. They went on an eleven-game winning streak during the season and this helped them to a second-place finish in the Western Conference and third place overall; which helped them qualify for the MLS Playoffs. They beat Colorado Rapids 2-0 to advance to the Conference Finals, in which they faced Los Angeles Galaxy and also won 2-0. They faced two-time winners DC United in the final and beat DC 2-0 to win the MLS Cup 98’. From this they qualified for the CONCACAF Champions’ Cup. Five days later they made history and won the U.S. Open Cup when they beat Columbus Crew 2-1 in the final curtesy of a golden goal in extra-time. They were only the second team in MLS history to do the ‘double’. Chicago’s coach, Bob Bradley was also named coach of the year.

The following season was not as successful for Chicago as they finished third in the Western Conference, which did result in The Fire making the playoffs; but were defeated 2-1 by Dallas Burn in the Conference semi-finals. Chicago did not successfully defend their U.S. Open Cup, as they were beaten by eventual winners Rochester Raging Rhinos 1-0 in the third round. The Fire regained their momentum in the 2000 season, by coming first in the newly formed Central Division. They beat New England Revolution and MetroStars, on their way to the Playoff Final. However; they were beaten 1-0 by Kansas City Wizards. Their fortune in the U.S. Open Cup was better and claimed their second title by beating Miami Fusion 2-1 in the final.

Chicago Fire’s next trophies came in the 2003 season, when they won their first Supporters Shield after coming first overall in the MLS. In the same season, they also claimed their third U.S. Open Cup, when they defeated MetroStars in the final 1-0. They also reached the MLS Playoff Cup final but lost 4-2 to San Joe Earthquakes. The Fire waited another three years to win another trophy. They added their fourth U.S. Open Cup in 2006 but this would be the last trophy in the club’s history.

Chicago Fire saw two changes of ownerships in the space of two-years, with Peter Wilt being dismissed in 2005, much to the disapproval of the fans, and being replaced by MetroStars executive, John Guppy. Two-years later (in 2017), Andrew Hauptman acquired the club for a fee estimated to be in the region of $35 million. Since Hauptman took control of Chicago Fire, the team have not won a trophy; in which fans believe is due to poor investment and running of the club.

Since their last trophy in 2006, Chicago Fire’s fans have not had much to be pleased about regarding their club’s performance. Chicago reached the final of the MLS Cup in 08’ and 09’ but in the next ten years, as they did not qualify for the cup in eight out of ten years; making the knockout round and quarter-finals in the other two years. Their fortune in the U.S. Open Cup was slightly better but nothing their fans could celebrate. The closest The Fire came to the U.S. Cup since they last won it was in 2011 when they were runners-up, after losing to Seattle Sounders 2-0 in the final. From the 2013 season to 2018 season, Chicago reached the semi-finals five out six times and in their last season were knocked-out in the fourth round.

The team that finishes last in the overall MLS standings, is presented with a Wooden Spoon. The official Wooden Spoon Trophy was created in 2015 and Chicago Fire won the inaugural Wooden Spoon Trophy. Chicago retained this embarrassing trophy in the following season (2016), after once again finishing in last place.

The Brimstone Cup is a trophy contested between Chicago Fire FC and FC Dallas. The trophy is awarded to the team with the most points in games played between the two. The cup was created in 2001 by two groups of fans from either team. Chicago claimed the first Brimstone Cup, but FC Dallas won the cup the following season. Dallas retained the trophy for the next nine years, until 2012, when Chicago finally won the cup, only for the second time. Chicago defended the trophy successfully for the next four years. Since 2016, the cup has gone back and forth between the sides, with Chicago winning the most recent trophy in 2019.

The Ring of Fire was created in 2003 and is effectively a Hall of Fame for former Chicago Fire players and coaches. The first ever inductee was their first ever signing as a club, Peter Nowak. He made over 114 appearances for Chicago and won the MLS Cup once and U.S. Open Cup twice. The second inductee was the man who scored the golden goal winner in the U.S. Cup Final in 98’ and also won the MLS Cup in 98’, Frank Klopas. The third inductee also help Chicago to the ‘double’ in 98’, Luboš Kubík. Former general manager and club president Peter Wilt was the fourth to be inducted. Former head coach, Bob Bradley, who won three trophies during his time at Chicago Fire was the fifth. The sixth player to be inducted was midfielder Chris Armas who made 214 appearances during his nine-year spell at the club. The final two inductees were both hold their own records at Chicago Fire. C.J. Brown holds the most appearances for Chicago Fire, pulling the shirt on a record 296 times; and the most recent inductee is Ante Razov, who is The Fire’s all-time leading goal scorer, with 76 goals.