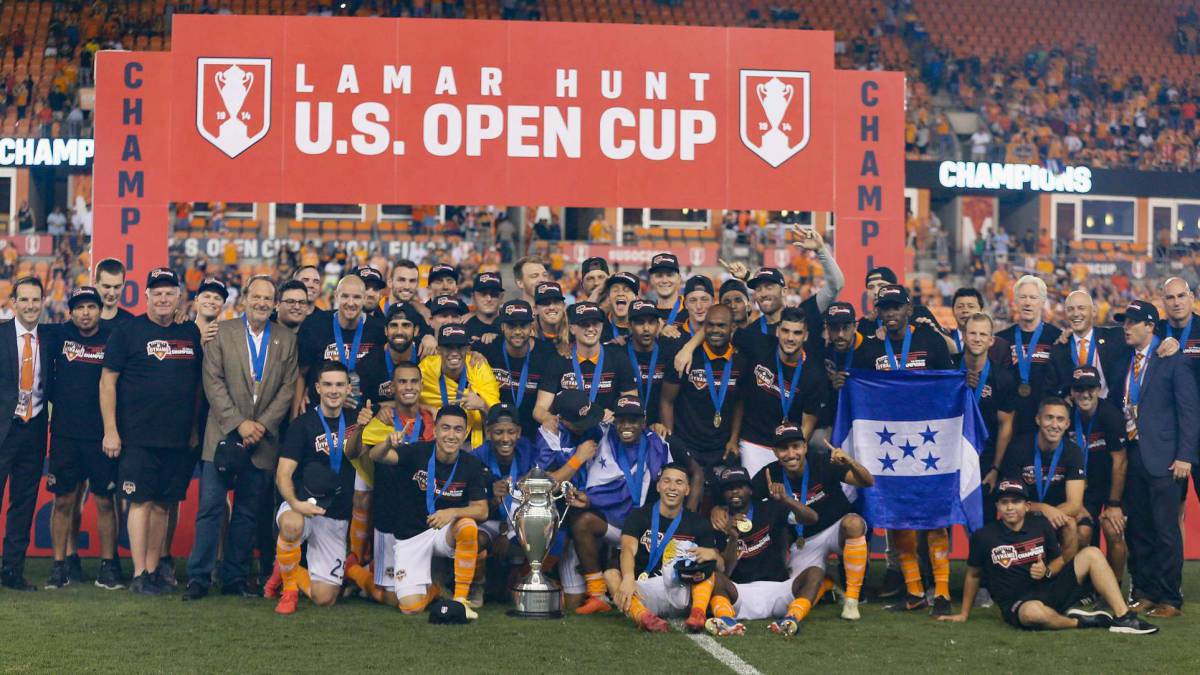 The “expansion” club that set the precedent for new ownership groups and teams in Major League Soccer (MLS), the Houston Dynamo have the unique history of being a founder of MLS and an “expansion” club.

The Dynamo, in their first season, won MLS Cup in 2006 and followed it up by going back to back in 2007. Add a 2018 US Open Cup victory and the Dynamo boast a not-too-shabby trophy cabinet.

Having featured prominent US National Team players like DaMarcus Beasley, Geoff Cameron, Brad Davis, Stu Holden, Chris Wondolowski, Brian Ching, Ricardo Clark, and plenty more internationals from the US and abroad, the Houston Dynamo are an important club in the history and current set up of MLS.

The Houston Dynamo franchise on paper began at the end of 2005. However, the true history of the club begins with the creation of MLS. The San Jose Clash, later the Earthquakes, was one of the original founding members of MLS in 1996.

After the 2005 season, the Earthquakes’ owners, Anschultz Entertainment Group (AEG),

decided and announced they were going to move the club after experiencing a plethora of problems in the Bay Area, in particular the difficulty in building a soccer-specific stadium.

On December 15th, 2005, MLS Commissioner Don Garber announced the creation of the Houston Dynamo as a franchise with all players, coaches, staff, and more from the Earthquakes moving over to the new team in Texas with a new name, brand, and more. And with that, the San Jose Earthquakes name would be retained by the league for a possible expansion to the Bay Area in the future (MLS did reinsert a new expansion club called the San Jose Earthquakes in 2008).

With the franchise born and not much else to do other than move employees, the Dynamo became MLS’ newest “expansion” team.

The rebrand and move to Houston proved fruitful right away. The Dynamo’s first home match, a 5-2 win over the Colorado Rapids, saw more than 25,000 people in attendance. Star forward Brian Ching scored four, all assisted by Dwayne De Rosario. And Alejandro Moreno added the last one late on. This game served as a microcosm that would end up being the Dynamo’s first season.

The Dynamo finished second in the league’s Western Conference with an 11-8-13 record and qualified for the postseason with ease. Ching and Rosario scored 11 goals each during the season with midfielder Brad Davis notching 11 assists on the year.

Houston took on Chivas USA in the first round of the playoffs and shockingly lost the first leg 2-1 in Los Angeles, despite a Ching goal. But in the return leg, Houston turned it and stormed back to advance 3-2 on aggregate thanks to goals from Davis and of course, Ching.

In the one-legged conference final, the Dynamo hosted Colorado. The Rapids took an early lead thanks to Jovan Kirovski. However, the Dynamo stormed back and took care of them 3-1 with a brace from Paul Dalglish and an insurance goal from Brian Mullen. With the conference title in hand, it was on MLS Cup where they’d face the New England Revolution for all the marbles.

Taking place at Pizza Hut Park in Frisco, Texas, home to FC Dallas, the Dynamo battled the Revolution for a tough 90 minutes. And even that wasn’t enough to separate the two. In both halves, both teams challenged the other’s keepers coming close to scoring. Brad Davis hit the post. Taylor Twellman had a shot stopped. The second half saw more of the same, but neither team could make the breakthrough. And so, the two headed to extra time.

The first half of extra time played out defensively, cautious, but still with a couple of chances on goal. Eventually, in the 113th minute, Twellman broke free from a beautiful and shot past the keeper for the opening goal. Right from the ensuing kickoff, the Dynamo stormed up the field and Brian Ching got into the box and headed in a cross to tie the game only 71 seconds later.

The two sides headed to penalty kicks with each scoring their first two. A miss for both New England and Houston meant everything was on the line for Revs defender Jay Heaps. Houston’s keeper Pat Onstad saved the shot and Houston had triumphed after a hard-fought match.

In their “first” year as a franchise, the Dynamo did the impossible by lifting the MLS Cup and setting the precedent for expansion clubs in 2006. 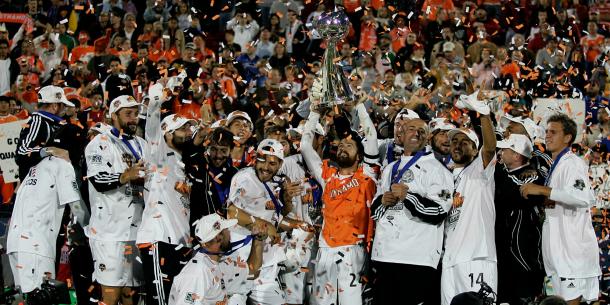 By the Dynamo’s MLS Cup title the previous season, they participated in the 2007 Concacaf Champions Cup, the North American equivalent to the UEFA Champions League. With the tournament starting in February, before the MLS season, the Dynamo had little time for an offseason. They beat Costa Rican side Puntarenas 2-1 on aggregate in the quarterfinals. In the next round, they lost 5-2 on aggregate to Mexican club Pachuca in the semifinals.

Just a few days after crashing out of the regional tournament, the Dynamo began their MLS season with a draw against the LA Galaxy. And it would be a rough opening two months as the Dynamo lost five of their opening eight matches. However, from June to the end of the season, they only lost three games and finished second in the conference, only one point behind Chivas USA. Into the playoffs, the Dynamo went again.

The Dynamo’s first-round playoff tie matched them against in-state rivals FC Dallas. The Dynamo lost the first game away from home 1-0. But at home, they won 2-1 to force extra time in a fiery affair that saw 10 players receive yellow cards and two that were sent off, both from Dallas. Brian Ching scored in normal time and extra time while Brad Davis got the last of the 4-2 aggregate victory taking them to face the Kansas City Wizards in the next round.

The Dynamo easily dispatched the Wizards 2-0 in the one-legged conference final which set up a rematch of the MLS Cup with the New England Revolution again, this time at RFK Stadium in Washington DC.

In the 2007 edition, the usual suspects were at it again, except Brian Ching who missed due to injury. Taylor Twellman opened the scoring in the first half to give the Revs the early lead. But in the second half, Joseph Ngwenya leveled the score before Dwayne De Rosario scored the winner with 15 minutes to go.

The Dynamo lifted MLS Cup for the second year in a row with a lot of the same team leading them throughout the season, including manager Dominic Kinnear, who also had to balance his team competing in the Super Liga, a tournament featuring Mexican and American/Canadian MLS teams during the season. 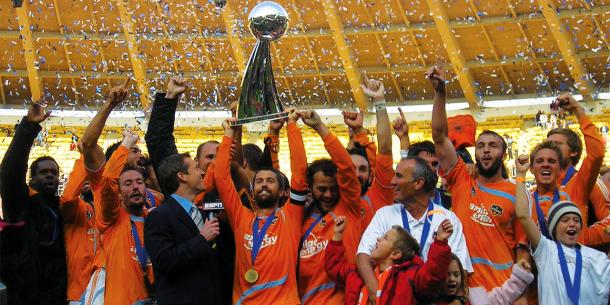 Over the next few years, the Dynamo struggled to replicate the success of their opening years. They won the Western Conference in 2008, but made nothing of it in the playoffs, while in the same season reaching the semifinals of the Concacaf Champions Cup. In 2009, they lost in the playoffs again and didn’t even get out of the rebranded and expanded Concacaf Champions League group stage.

In 2010, the Dynamo hit a new low as for the first time in club history, they didn’t qualify for the playoffs. Even the semifinal appearance in the Super Liga wasn’t enough to overshadow the disappointing domestic season.

In 2011, the Dynamo reached the playoffs after a strong finish to the season and cruised past Philadelphia and Kansas City in the playoffs. In MLS Cup, they traveled to Los Angeles to take on the LA Galaxy featuring David Beckham, Landon Donovan, and a host of other MLS stars. The Galaxy would go on to win 1-0.

New Stadium and Back To Back MLS Cup Defeats

The 2012 season may not have gone or ended the way the club envisioned. However, it kicked off with a bang twofold as the Dynamo won their first two matches of the season. The results faded a bit, but after that, they opened their brand new, soccer-specific stadium, joining the growing list of MLS clubs with their solely owned stadiums. BBVA Stadium opened on May 12th, 2012 with a 1-0 win over DC United.

In 2012, the Dynamo earned their way to MLS Cup again after another up and down season, although more up and than down. They finished the domestic league unbeaten at home and earned another spot in the playoffs. They also competed in the Concacaf Champions League, winning their group in the fall, with the knockout stages slated for the Spring of 2013 where they’d only get as far as the quarterfinals.

They Dynamo matched up with the Chicago Fire in the playoffs and beat them before eliminating Kansas City again in the conference semifinals. Then they faced and beat DC United in the conference finals. After getting past United, the Dynamo took on the Las Galaxy and the same set of players once again in a repeat of the previous season’s MLS Cup loss in Los Angeles. And this time, there was no difference. Beckham, Donovan, and Co. beat the Dynamo 3-1 on home soil yet again, sending Houston home with nothing for the second year in a row.

Since the back to back losses in MLS Cup, the Dynamo have only qualified for the playoffs on two occasions, 2013 and 2017. Even then, they took one of the last spots in the postseason each time.

Long time manager, all the way back to the San Jose Earthquake days, Dominic Kinnear eventually left the club after the 2014 season. The club had a core set of players locked into contracts, such as captain Brad Davis and newcomer and US International DaMarcus Beasley, however with a new manager, Owen Coyle, and ownership reshuffling and changes did not help the club succeed on the field.

2018 saw a renewed sense of pride in the organization as they won their first US Open Cup, the country-wide tournament for clubs of all levels similar to England’s FA Cup. The Dynamo only faced one non-MLS team in the competition, including a quarterfinal victory over the Sporting KC, formerly the Wizards, and a semifinal victory over expansion club LAFC in the semifinals. But in the final, the Dynamo cruised to victory starting with Mauro Manotas scoring the opener in only the fourth minute. The Colombian forward doubled the lead in the 25th minute and Auston Trusty padded ht lead to give the Dynamo a comfortable victory and their only real success of the recent past.

For the 2020 season, the club hired former US Men’s National Team and former US youth team manager Tab Ramos. The Dynamo drew their first game of the season, 1-1, against the Galaxy and their new frontman Javier “Chicharito" Hernandez. The Dynamo then got blasted 4-0 by Sporting in Kansas City before the Coronavirus pandemic saw he shutdown of MLS.

The Dynamo have a unique place in MLS history as a “founder” of the league when they were the Earthquakes. And in San Jose, they even won two MLS Cups and a Supporters Shield, awarded to the team with the best regular-season record overall. However, that history is no longer with the club as they rebranded and became an “expansion” franchise when they moved to Houston before the 2006 season.

As the Dynamo, they hit the ground running and won MLS Cup in their first two years as an organization, setting the tone for expansion clubs in new markets trying to build a loyal fanbase by winning.

If you combined the history of the Dynamo and pre-Dynamo Earthquakes, they’d be one of the giants of MLS with four MLS Cup victories and six appearances, all in the first decade-plus of the league. However, they are only the Dynamo. And while they do boast two MLS Cup triumphs and two losses in seven years, the recent mediocrity has taken a lot of the early shine off the club’s success.

The Dynamo have a unique place in MLS as a founder, expansion club, winner, and middling nobody, all in just 25 years. The Houston Dynamo might also be the most unique MLS club in history.