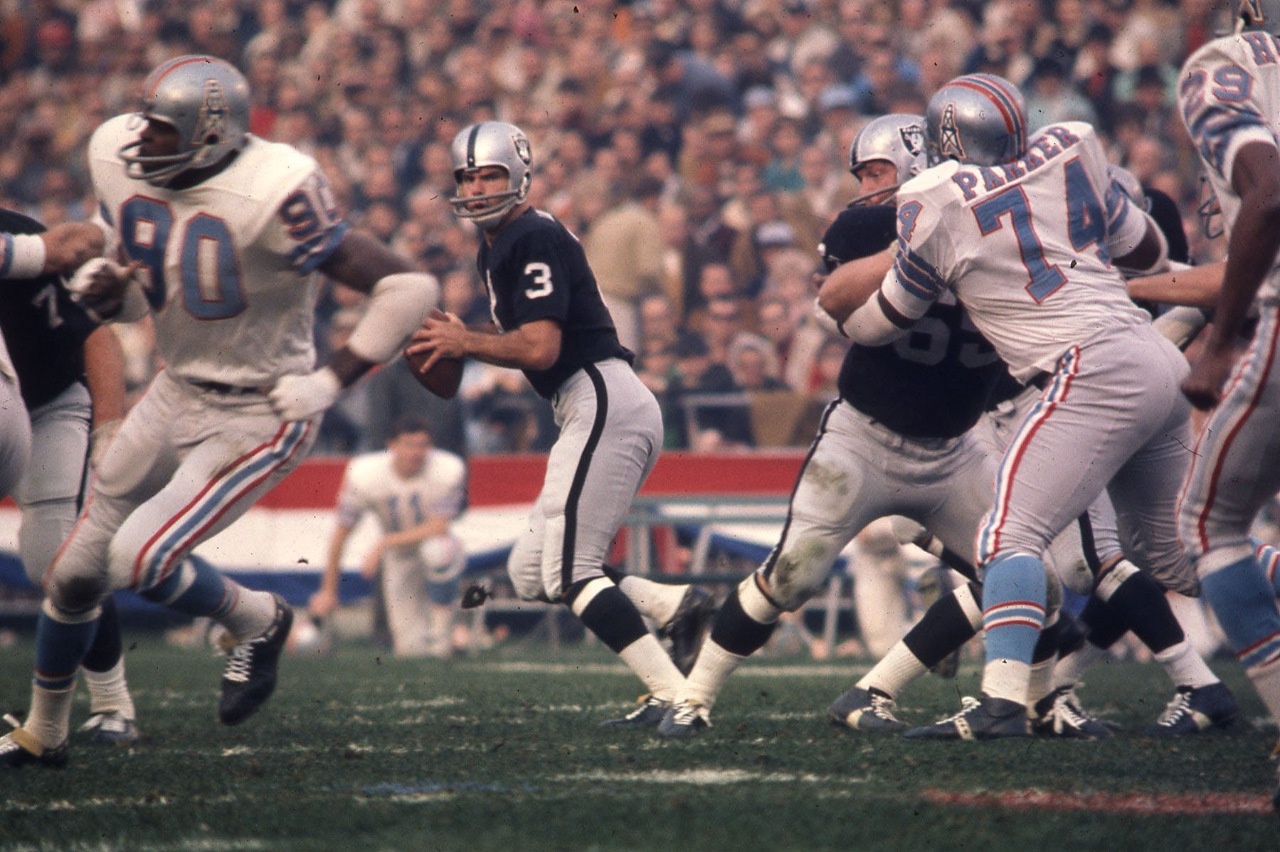 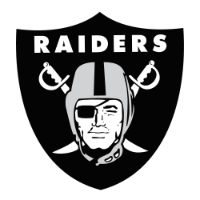 The Oakland Raiders were originally going to be called the "Oakland Lords" after a team naming contest ended with that name first, but after being the butt of local jokes, the name was changed to the Raiders before the 1960 season began.  After enjoying a successful collegiate coaching career at Navy during the 1950s, San Francisco native Eddie Erdelatz was hired as the Raiders' first head coach. On February 9, 1960, Erdelatz accepted the position of head coach of the Oakland Raiders. In January 1960, the Raiders settled in Oakland, and due to NFL interference with the original owner of the eighth franchise, they were the last team of eight in the new American Football League to select players, so they were relegated to the remaining available talent.

In their debut year under Erdelatz the Raiders finished with a 6-8 record. However, the following season Erdelatz was fired after the Raiders were outscored 77-46 in the first two games of the season. That same season, following Erdelatz's dismissal, management named Los Angeles native and offensive coach Marty Feldman as the Raiders' head coach. The team finished the 1961 season with a 2-12 record.

Al Davis comes to the team

After the 1962 season, Raiders managing partner F. Wayne Valley hired Al Davis as Raiders coach and general manager. At 33 years old, he was the youngest person in the history of professional soccer to hold such a position, and Davis immediately began implementing what he called the "vertical game." Under this style of play Davis and the Raiders improved to 10-4 and he was named AFL Coach of the Year in 1963. Also, it was in this year that the Raiders' famous silver and black uniform debuted in the opening game of the regular season on September 8, 1963.

In April 1966, Davis left the Raiders after being named AFL Commissioner, promoting assistant coach John Rauch to head coach. Two months later, the league announced its merger with the NFL. With the merger, the commissioner position was no longer needed, and Davis entered into discussions with Valley about returning to the Raiders, which he would accomplish after buying 10% of the team and becoming the Raiders' third general partner.

For the 1967 season, the Raiders finished the 1967 season with a 13-1 record and won the 1967 AFL Championship, defeating the Houston Oilers 40-7. The victory earned the team a trip to the Orange Bowl in Miami, Florida to participate in Super Bowl II. On January 14, 1968, the Raiders were defeated in the second Super Bowl in history, losing 33-14 to Vince Lombardi's Green Bay Packers.

The following year, the Raiders finished the 1968 season with a 12-2 record and again won the AFL West Division title. This time, however, they lost 27-23 to the New York Jets in the AFL Championship Game. 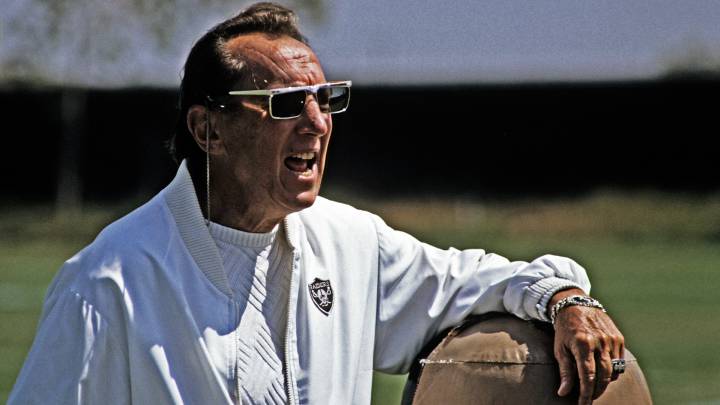 In 1976, the Raiders won 13 regular season games and a controversial 21-17 victory over New England in the divisional playoffs. They then defeated the Steelers 24-7 in the AFC Championship to advance to their second Super Bowl. In Super Bowl XI, Oakland's opponent was the Minnesota Vikings, a team that had lost three previous Super Bowls. The Raiders jumped out to an early lead and led 16-0 at halftime. In the end, after forcing Minnesota into multiple turnovers, the Raiders won 32-14 for their first post-merger championship. 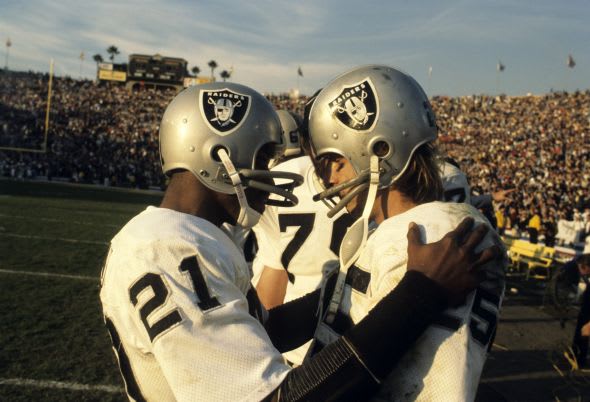 The following season the Raiders finished 11-3, but lost the division title to the Denver Broncos. They settled for a wild card, defeating the Colts in the second-longest overtime game in NFL history and that included Ghost to the Post. However, the Raiders fell to the Broncos in the AFC Championship.

In 1980, Al Davis signed a memorandum of agreement to move the Raiders from Oakland to Los Angeles. However, it wasn't until May 1982 when the Raiders moved to Los Angeles for the 1982 season and would play their home games at the Los Angeles Coliseum. The newly minted Los Angeles Raiders finished the short 1982 goal season 8-1 to win the AFC West, but lost in the second round of the playoffs to the Jets. The following season, the Raiders finished 12-4 to win the AFC West. Convincing playoff wins over the Steelers and Seattle Seahawks in the AFC playoffs propelled the Raiders to their fourth Super Bowl. Against the Washington Redskins in Super Bowl XVIII, the Raiders earned a 38-9 victory and their third NFL championship.

The team had another successful regular season in 1984, finishing 11-5, but a three-game losing streak forced them into the playoffs as a wild card, where they fell to the Seahawks in the Wild Card game.

The Raiders' 1985 campaign featured 12 wins and a division title when Marcus Allen was named MVP. The Raiders' fortunes declined after that, and from 1986 to 1989, they finished no better than 8-8 and posted consecutive losing seasons for the first time since 1961-62.

On June 23, 1995, the Raiders would return home to play the 95 season in Oakland, the move was met with much joy, and under new coach Mike White the 1995 season started well for the Raiders. Oakland started 8-2, but injuries to starting quarterback Jeff Hostetler contributed to a six-game losing streak by a final of 8-8 and the Raiders failed to qualify for the playoffs for the second consecutive season.

For the 2000 season, Oakland finished 12-4 led by veteran quarterback Rich Gannon (MVP), Oakland won its first division title since 1990, and advanced to the AFC Championship, where Gannon was injured when he was sacked by Baltimore Ravens guard Tony Siragusa. The Raider offense struggled without Gannon, and the Raiders fell 16-3 to the eventual Super Bowl champion Ravens.

2 years later, under Bill Callahan, the Raiders finished the 2002 season 11-5, won their third straight division title and earned the top seed in the playoffs. Rich Gannon was named NFL MVP after passing for a league-record 4,689 yards. After beating the Jets and Titans by wide margins in the playoffs, the Raiders made their fifth appearance in Super Bowl XXXVII. Their opponent was the Tampa Bay Buccaneers, coached by Gruden. The Raiders, who had made no significant changes to Gruden's offensive schemes, were intercepted five times by the Buccaneers en route to a 48-21 blowout.

After a couple of poor seasons, and with Jack de Rio at the helm, the Raiders showed great improvement in Del Rio's first season, improving on their three-win season in 2014, going 7-9 in the 2015 season. Gradually, however, their end in Oakland would draw near as fate would have another path awaiting them.

On March 27, 2017, NFL team owners voted 31-1 to approve the Raiders' move to Las Vegas, Nevada. This move became effective in 2020, once the construction and opening of Allegiant Stadium, a venue located in the city of Paradise, Nevada, United States, was completed. It was inaugurated at the end of July 2020 and has a capacity for 65,000 spectators. 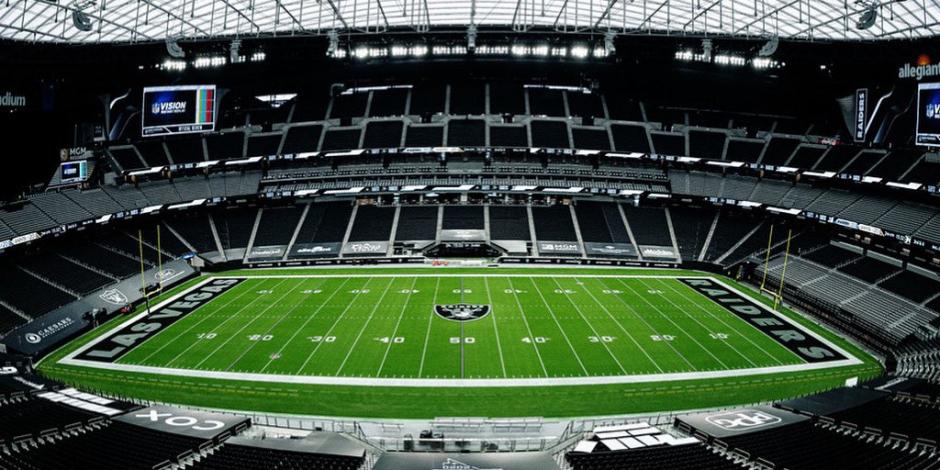