The return final will be in Leon!

We really appreciate your preference to live the game with us. The one that for many was the best team of the tournament reached the great final and will close it at home. Cruz Azul or Pumas define tomorrow the second pass.

Keep an eye on the sports information in our social networks and in Vavel.com

90' León is in the final! The leader will be looking for the title against Cruz Azul or Pumas!
11:53 PM2 months ago

82' Near Leon of the second. We reiterate; Chivas needs two despite the fact that the Guanajuato team scores again. It looks very difficult.
11:35 PM2 months ago

In search of the miracle

74' Unless something extraordinary happens, Leon will be in the final. Chivas is out of ideas.
11:24 PM2 months ago

A couple of more moves

63' Macías and Molina leave, Beltrán and Torres enter. Just under half an hour and Chivas still need two goals.
11:15 PM2 months ago

53' The closest to Chivas. Escape from the left, powerful shot, Cota was not going to arrive and the ball hit the post.
11:08 PM2 months ago

It was the second one!

47' New attack of Leon but Gudiño held on, made the goal small and avoided the goal.
10:47 PM2 months ago

45' With the minimum advantage Leon goes to the break. The Red-White will need a goal soon to get into the game.
10:43 PM2 months ago

41' Chivas had it! Dropped from the right but service did not reach its target and Leon's back clears.
10:37 PM2 months ago

10 minutes to the end of the first half

35' The game continues without much emotion. The rhythm is the most pleasant but both sets arrive with little clarity to the last sung line.
10:32 PM2 months ago

Half an hour of play

31' A couple of shots from afar have been the best approaches from visitors. It would be very important if Vucetich's men go to half-time with the draw.
10:26 PM2 months ago

Chivas goes for two even if Leon scores one more goal

27' For the visitor goals, at this moment the Red-White are still looking for a couple of goals, they could even give themselves the luxury of allowing one more goal.
10:21 PM2 months ago

The first one fell!

17' Good play by Mena, service to Campbell and the tico opens the score. Chivas needs 2 goals.
10:12 PM2 months ago

The rhythm León is looking for

11' The script looks like the one expected; Ambriz with the ball and Chivas waiting for a counter-attack. 0-0 we continue.
10:09 PM2 months ago

7' Gradually the locals start taking more of the ball. They look for that goal that can give them a little more peace of mind.
10:06 PM2 months ago

5' Both Chivas and Leon fought for possession in the first minutes. Instants of analysis of the opponent.
10:03 PM2 months ago

1 'In 90 minutes we will have the first finalist of the tournament.
9:48 PM2 months ago

The special one for Leon

Angel Mena is the footballer that can make something happen in any second. The chances of Leon making it to another final are on Mena's feet.
9:41 PM2 months ago

Leon fans are clear about who should be the loser tonight.
9:35 PM2 months ago

This is how Chivas warms up

Gudino warms up at full intensity. The Chivas goalkeeper will have the game of his life tonight. 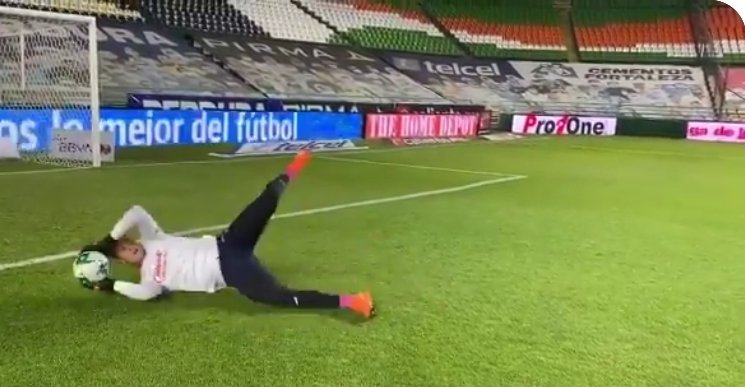 The forward will be start again today after his physical problems in the past weeks. Vucetich must know that he is 100% ready for tonight's clash.
9:28 PM2 months ago

It is reported that Argentinian forward Emanuel Gigliotti would not be in the starting line-up sent by Ignacio Ambriz.

The 'Puma' has scored five goals this season.

Chivas locker room looks like this. Facemasks and a lot of nerves worthy of being a step away from the Liga MX final.
9:04 PM2 months ago

Chivas has just arrived at the stadium as well. This is the opportunity that Ricardo Pelaez has been looking for since his arrival as Chiverio's sports director.
9:00 PM2 months ago

Astonishing how the fans of Leon escorted their team before it arrived at the stadium.

Although it looks spectacular, it is an irresponsible attitude of the people because of the current state of the Covid-19 pandemic in Mexico.

Leon's effectiveness playing on their home turf is tremendous.

Since 365 days ago, the emeralds have played 13 matches in their stadium and have only drawn once. Their last defeat was on November 30, 2019, by 2-1 against Morelia.

Leon is in the house

The home team just arrived to the stadium. The esmeralda team should get ready for the warmup routine in less than 30 minutes.
8:12 PM2 months ago

What Chivas needs to make it to the final

The Rebano could tie without scoring to go to the final, however, the option to make the match more difficult for Leon if they score more than two goals, looks interesting. The proposal of the locals coincides with what the Jalisco team is probably looking for; to attack in transitions at speed.
8:09 PM2 months ago

Although a draw is enough for León, we will surely see the locals proposing more of the game in the search for variants to be able to get ahead on the overall score. We expect a match in which Nacho Ambriz's team will take possession of the ball.

Between Mena and Montes could be the key.

El Conejito was negative for Covid and will be able to be for the return in Leon. Yesterday he was present at the training and Vucetich can take him into account tonight.
6:59 PM2 months ago

Less than three hours to go

Less than three hours remain before the ball rolls in Leon and the first finalist of the Guard1anes 2020 tournament is defined.
6:32 AM2 months ago

Chivas and Leon are more equaled in the defenssive part

Club Leon has 3 yellow cards per 0 of Chivas and both teams could score 1 goal each one. Fernando Navarro and Luis Montes from Club Leon were the 2 most valuable players of the 1st game of this Liguilla MX Semifinal that today will take place to win a place in the big final!
6:27 AM2 months ago

Possession was retained by Club Leon in the first semifinal

According to our statistics, the possession of the ball in the first game was also won by the Lion Club for 63% of the time with the ball. Chivas only needed 37% to tie the game.
He gave 493 passes through 288 of Chivas with a passes accurary percentage of 83% of them as successful passes for 73% of the successful passes of Guadalajara.
6:22 AM2 months ago

Leon shot on goal in the first leg, much more than its rival, Chivas, 20 times by 10 of the Guadalajara in the first match of the Liguilla Semifinal 2020.
6:17 AM2 months ago

Follow along with us all the details, commentaries, analysis and lineups for this León vs Chivas match.

How to watch the game: Live TV and Stream

If you want to directly stream it: Sky Blue to go App.

If Chivas make it to the final, they will play the second leg in Mexico city.

If Chivas makes it to the next round, regardless of the winner between Pumas and Cruz Azul, they will play the first leg at Akron Stadium and the second leg in Mexico City.

Given the controversy with its goalkeeper, Rodolfo Cota, after the penalty in the first leg, the esmeraldas showed their support to the goalkeeper for the return leg.
5:47 AM2 months ago

Chivas drew 1-1 at home, so a win by the slightest difference would see them through to the final.

Similarly, a draw of more than two goals or more would be enough for them.

Leon scored in the first leg

In spite of not winning the first match, Nacho Ambriz's team has the advantage of having scored a goal as visitors, besides having finished the tournament with the best position in the table.
5:37 AM2 months ago

The León vs Chivas match will be played at the stadium León, in Guanajuato, Mexico.

The kick-off is scheduled at 10pm ET.