Thank you for following the rebroadcast of América's 1-0 win over Puebla in Liga MX matchday 5. See you next time.
9:56 PM2 months ago

With this victory, América momentarily takes the lead in the tournament with 10 points and continues to be in perfect form at home.
9:55 PM2 months ago

Perg gets a double yellow card and is sent off.
9:52 PM2 months ago

Martinez's header was blocked by Ochoa, but the referee had already flagged for a scuff on Sanchez.
9:46 PM2 months ago

Martin left and Viñas entered, in another América change.
9:45 PM2 months ago

Once again, Puebla failed to take advantage of the set piece, which Ochoa took without any major problems.
9:42 PM2 months ago

Escoto entered and Fernández left for Puebla.
9:41 PM2 months ago

Lainez's delayed diagonal that Martin turned back by just a few centimeters.
9:33 PM2 months ago

Maia left and Daniel Aguilar came on for Puebla.
9:30 PM2 months ago

Roger Martinez drives and fires a shot to the near post to open the scoring.

Alvarez's half-volley was saved by Ochoa, although he had already been flagged offside.
9:25 PM2 months ago

Puebla had more control of the ball in the second half, but was ineffective from set pieces.
9:22 PM2 months ago

Aquino and Martínez come on.

Álvarez's header over the top and Puebla comes close again.
9:19 PM2 months ago

Corral's cross is misplaced and ends in a goal kick.
9:17 PM2 months ago

Change for Puebla. Tabó comes off and Fideo Álvarez comes on.
9:12 PM2 months ago 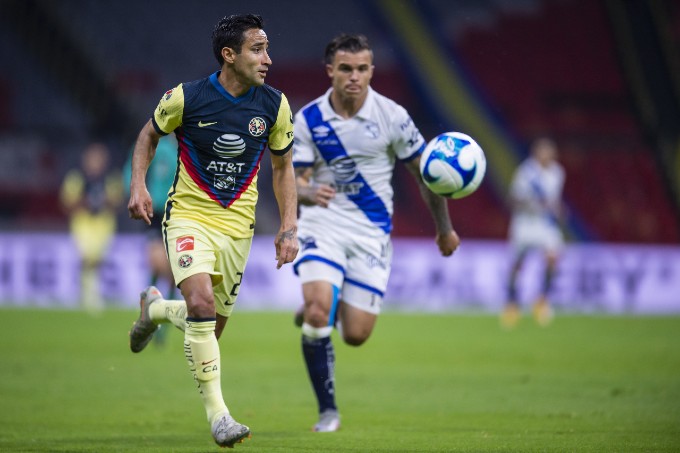 Maia knocks down Martin and shows him the yellow card. One more minute is added.
8:43 PM2 months ago

Aguilera's free kick was saved by Silva and, on the rebound, Naveda missed it alone in front of the goal.
8:42 PM2 months ago

Lainez is fouled and Perg is shown the yellow card.
8:37 PM2 months ago

Ormeño tried to pass the ball to Araujo, but Ochoa came out in time to take the ball.
8:30 PM2 months ago

Jorge Sanchez's cutback and shot goes over the top of the goal.
8:28 PM2 months ago

They called for a push on Martin in the area, but the referee had already ruled offside.
8:25 PM2 months ago

Chucho López's shot from half distance is saved by Silva.
8:21 PM2 months ago

Two Puebla shots were saved by Ochoa, including the second shot by Santi Ormeño.
8:13 PM2 months ago

Lainez's cross is blocked by Lucas Maia inside the six-yard box.
8:10 PM2 months ago

Although lacking in depth, it is now Puebla who have taken possession of the ball in the final moments.
8:08 PM2 months ago

Lainez steals the ball on the edge of the area from Gularte, but the referee pointed out that it was cleanly handled.
8:02 PM2 months ago

América quickly gained possession of the ball, although for now without depth.
8:00 PM2 months ago

Puebla and América take the field for the fifth match of the tournament.
7:55 PM2 months ago

This is Puebla's lineup for this match. 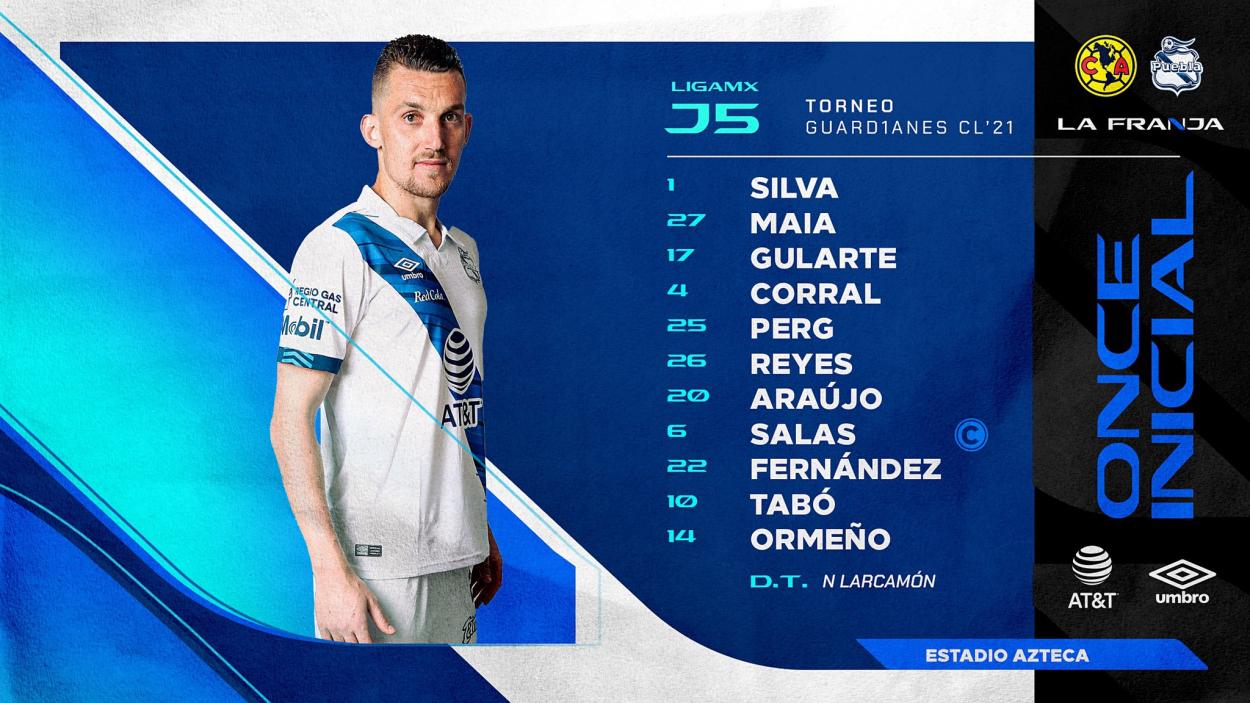 You are not convinced

Dos Santos will not start as well as Viñas, only Martin will start as the only nine that Santiago Solari will use for this game.
7:40 PM2 months ago

To break the curse

Despite beating Cruz Azul on this field two weeks ago, Puebla has not beaten América at the Estadio Azteca since 2015 and will be looking to break that streak.
7:35 PM2 months ago

This is how America warmed up

After defeating the coronavirus, Guillermo Ochoa returns to the goal to provide security to the goal after criticism of Óscar Jiménez's mistake in the tie against Santos.
7:26 PM2 months ago

Among the top five

If Puebla pulls off the upset and wins, they would have eight points to move up to fifth place for the time being.
7:21 PM2 months ago

For the first places

Santos' momentary victory over Atlas would mean that if América were to beat Puebla, it would only be enough for second place in the overall standings with 10 points.
7:06 PM2 months ago

Showing off the t-shirt

Showing off the jersey and warding off bad luck, this is how Puebla announced the clothing it will wear for this match. 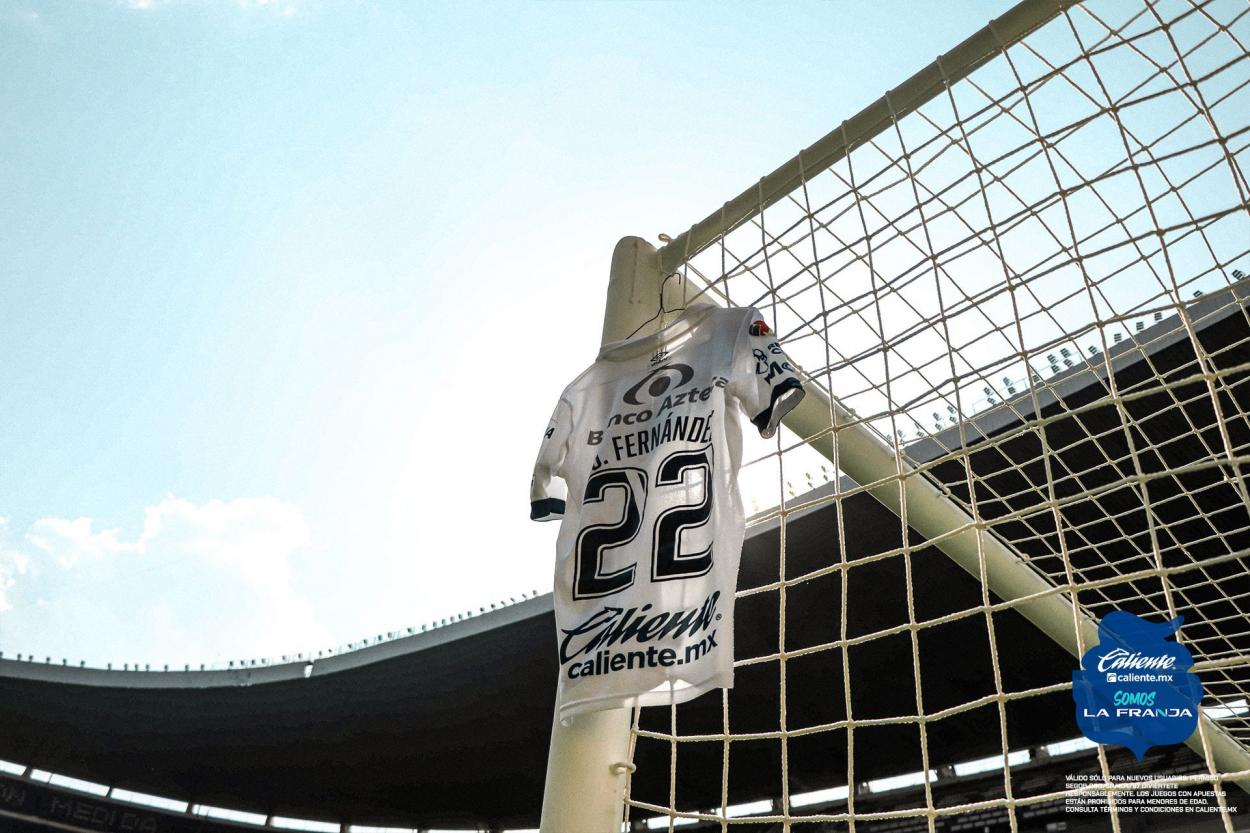 Led by Ema Aguilera, América will take the field in their traditional yellow and blue uniform, remembering that they are undefeated at the Azteca Stadium. 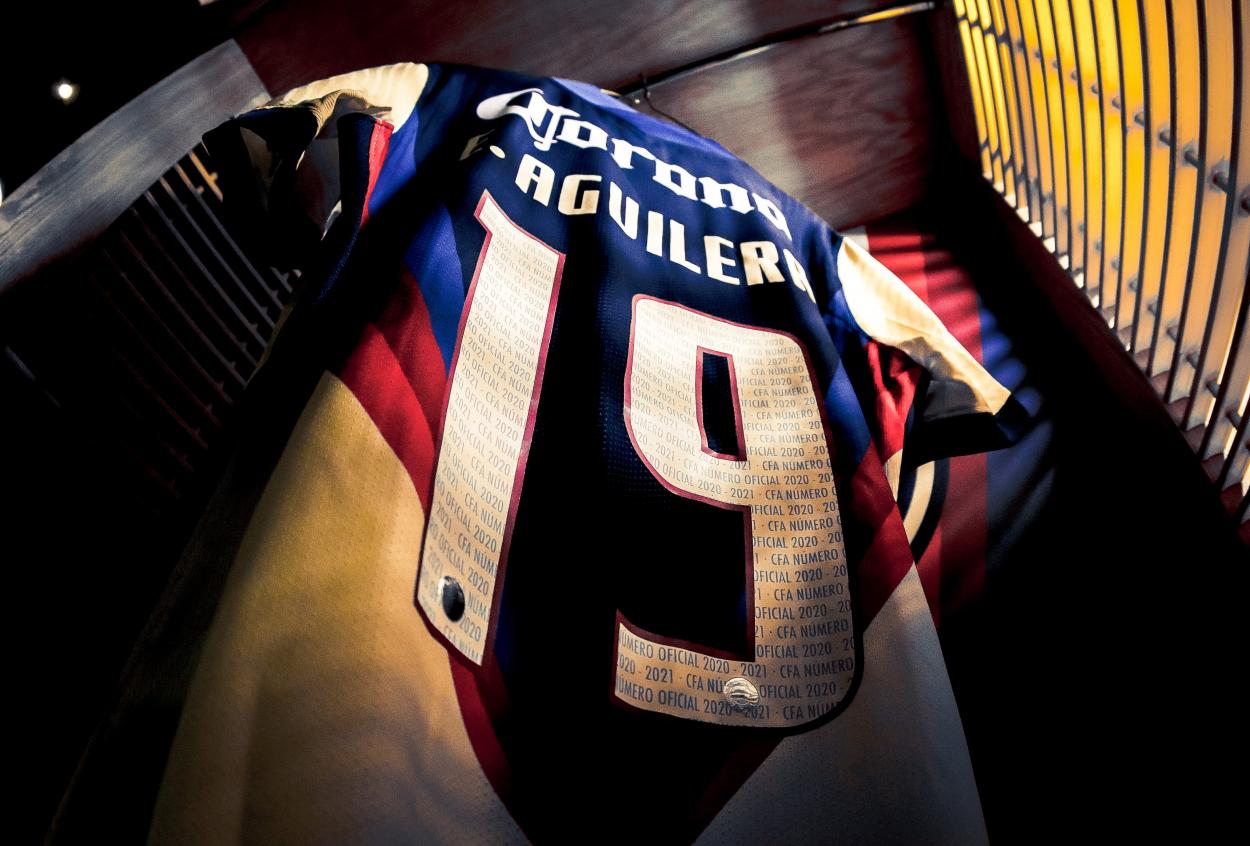 This is what América's dressing room looks like before this game. Simply spectacular. 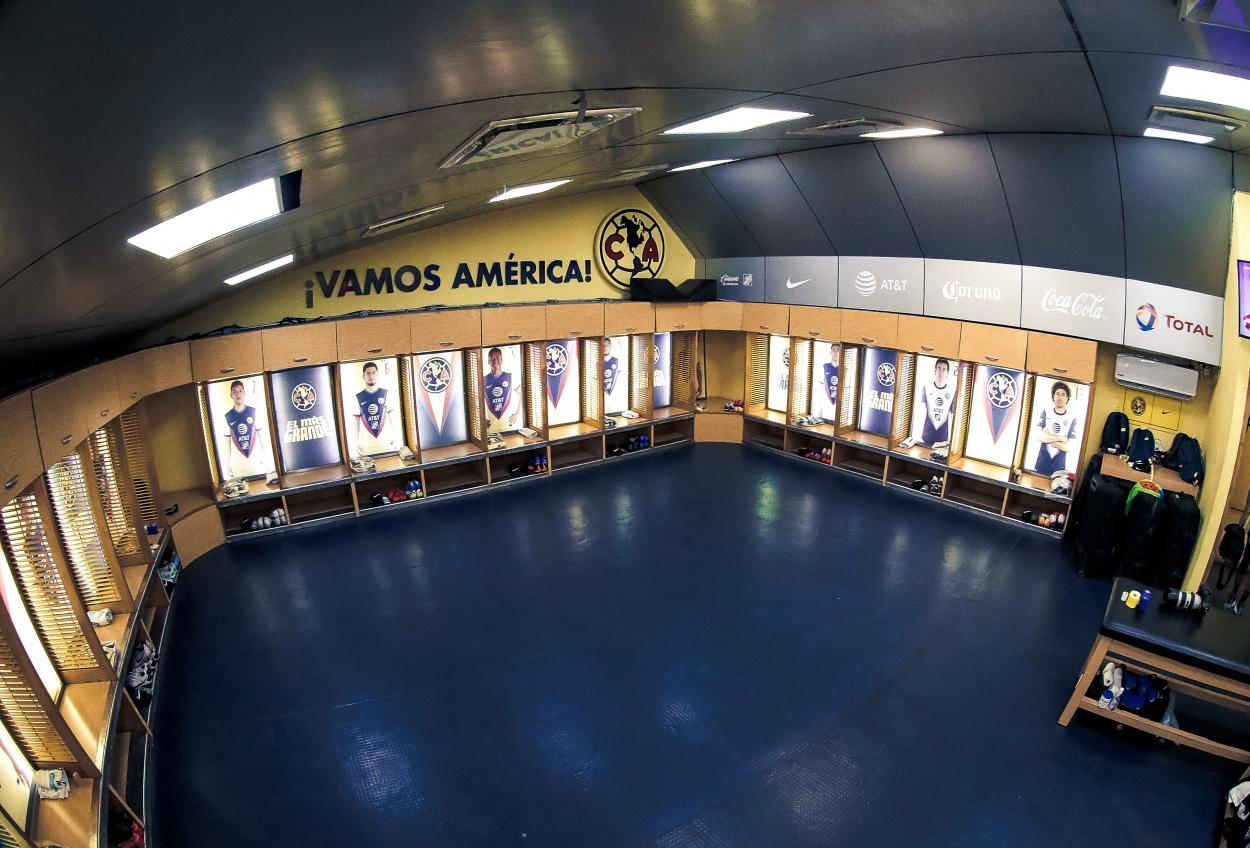 America arrives at the nest 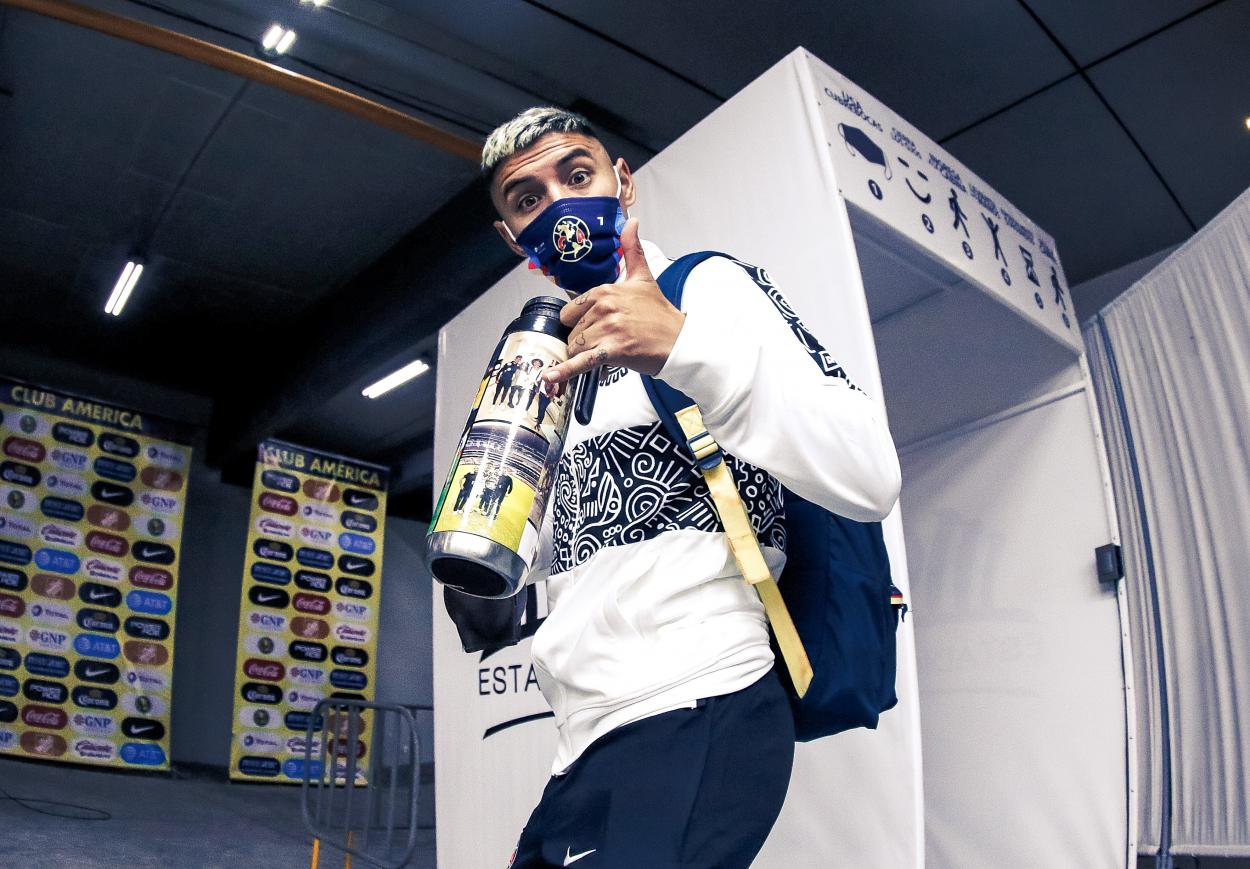 We start with the coverage

América returns to the Estadio Azteca with the goal of maintaining its perfect record at home against La Franja del Puebla. We begin with the coverage.
6:41 PM2 months ago

Do not miss a detail of the match with the live updates and commentaries of VAVEL. Follow along with us all the details, commentaries, analysis and lineups for this América vs Puebla match.
6:36 PM2 months ago

The Aguilas have five consecutive wins over Puebla on any field; Puebla's last win in the Mexican capital came in the 2011 Apertura by a 3-2 score. 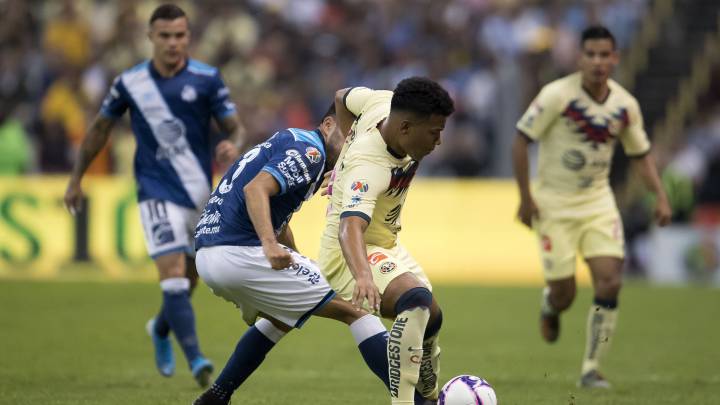 How to watch América vs Puebla Live TV and Stream

Santiago Ormeño has been the main man in attack in recent tournaments and, in a stadium like the Azteca, he will have to take advantage of the stage to show his quality. 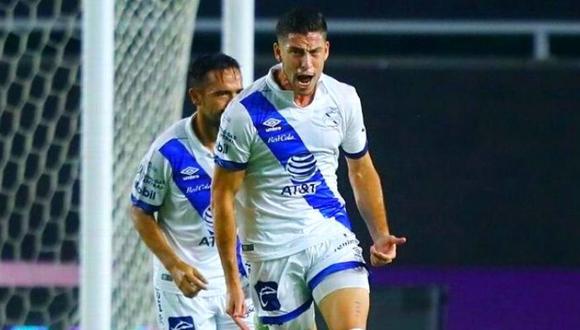 Guillermo Ochoa has been missing a lot for America in the last few games and once the coronavirus is over, the goalkeeper will be back under the three posts. 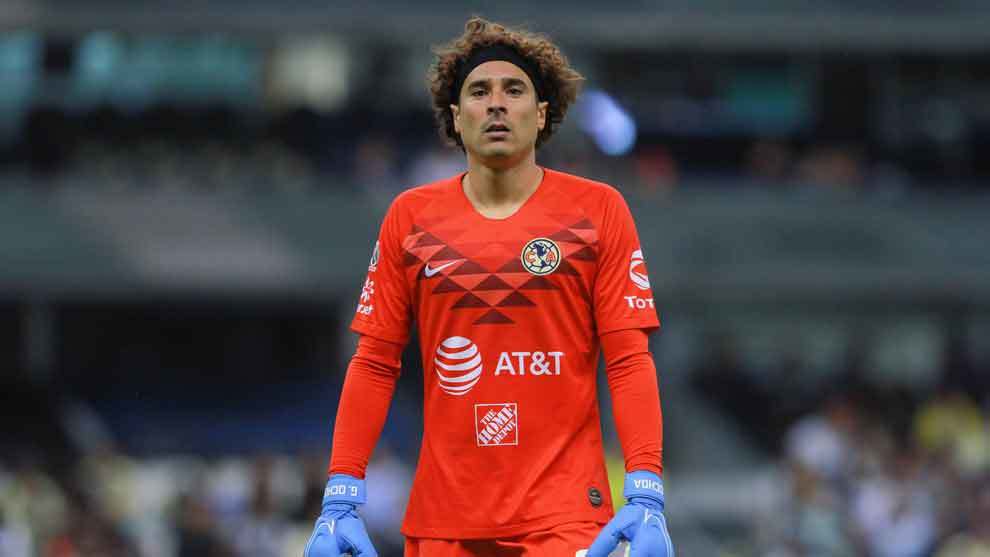 Referee for America vs Puebla

America vs Puebla will be refereed by Cesar Arturo Ramos Palazuelos.
6:11 PM2 months ago

Puebla: back to winning ways at the Azteca

A couple of weeks ago, Puebla defeated Cruz Azul at the Azteca by the narrowest of margins, so they will be hoping for the same kind of victory on their second visit.
5:56 PM2 months ago

The Aguilas have made their home advantage count in the championship and want to continue with the same momentum in order to consolidate their position at the top of the general table.
5:51 PM2 months ago

The America vs Puebla match will be played at the stadium Azteca, in Mexico City. The kick-off is scheduled at 8pm ET.
5:46 PM2 months ago

Welcome to VAVEL.com’s LIVE coverage of the 2021 Liga MX match: America vs Puebla!