Thanks for following this match on VAVEL USA! Until the next time.
10:12 PM22 days ago

On Matchday 7, America will visit Atlas and Queretaro will host Puebla.
10:02 PM22 days ago

This was America's second goal

The referee adds three more minutes to the match.
9:47 PM22 days ago

The last fifteen minutes of the match and America is more insistent, but Queretaro defends well and has avoided the second goal.
9:22 PM22 days ago

Kevin Ramirez finds the ball inside the area and shoots, but Ochoa keeps the ball without problems.
8:57 PM22 days ago

Richard Sanchez kicks the ball with power, but the ball hits the visitor's defense.
8:52 PM22 days ago

Henry Martin breaks down the right and sends in a cross. Daniel Cervantes makes a great save and sends the ball to the side.
8:47 PM22 days ago

This was Gallos' goal

Naveda wants his second goal. The player from the Americas steps on the edge of the area, but his shot is saved by Gil Alcala.
8:12 PM22 days ago

Henry Martin who receives with his chest, settles, and hits a powerful shot, but his ball goes over the goal.
8:07 PM22 days ago

Madrigal's cross. The ball is passed around the area and Da Costa fails to connect the ball.
8:02 PM22 days ago

Powerful shot by Suarez that is correctly deflected by Alcala. Gallos are saved from the second goal.
7:47 PM22 days ago

CLOSER AMERICA! Cordova's cross is pumped to Henry Martin, who shoots first-time, but Alcala makes a great save to prevent the first goal of the match.
7:37 PM22 days ago

Red card for Doldán after a stomp on Henry Martin.
7:17 PM22 days ago

CLOSER GALLOS! Da Costa makes the individual play inside the area, Ochoa saves and the ball is headed for goal; however, Emmanuel Aguilera appears to prevent the goal by clearing the ball off the line.
7:12 PM22 days ago

Roger Martínez takes a shot from outside the area, but the ball goes wide of the goal.
7:07 PM22 days ago

The players go out onto the field to do warm-up exercises. 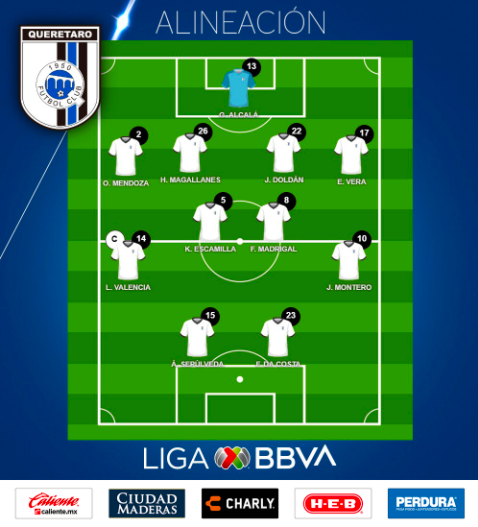 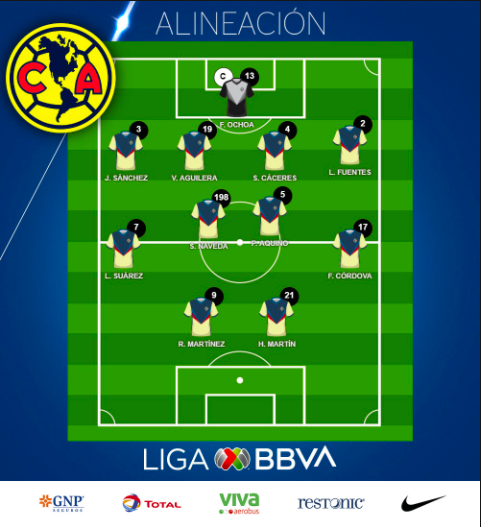 With the proper hygiene protocols, the players are already at the Azteca Stadium.
6:42 PM22 days ago

Los Gallos Blancos have not won at the Azteca since the 2017 Apertura. However, in the last tournament, Queretaro defeated America 4-1 at the Stadium Corregidora.
6:37 PM22 days ago

The Azteca Stadium is a soccer stadium located in Mexico City, with a capacity of 87,000 spectators, making it the biggest in Mexico, the third biggest in the continent and the eleventh biggest in the world.
6:32 PM22 days ago

Do not miss a detail of the match with the live updates and commentaries of VAVEL. Follow along with us all the details, commentaries, analysis and lineups for this America vs Queretaro match.
6:27 PM22 days ago

How to watch America vs Queretaro Live TV and Stream

Angel Sepúlveda | In his second stint with the Gallos, this striker has started off on the right foot. He has scored two goals in the current tournament and his unbalanced play and speed could be a danger for the azulcrema defense.
6:17 PM22 days ago

Roger Martínez | Although he was practically erased with Miguel Herrera, Roger found a second chance with Solari and is taking advantage of it. He is the current goal scorer for the eagles with two goals and is expected to continue to increase his quota to earn the trust of his coach.
6:12 PM22 days ago

For the first away win

The Gallos Blancos have had a good start to the tournament at home, but the opposite is true when they're away, as they have accumulated two defeats as visitors. In their most recent match, Queretaro defeated Pachuca 3-1 at the Estadio Corregidora. Gallos are in seventh place with a record of three wins (Atlas, Pumas and Pachuca) and two losses (Toluca and Cruz Azul).
5:52 PM22 days ago

Staying at the top

Santiago Solari's players have failed to convince their demanding fans with their style of play, as their victories have been criticized for being lackluster. In their most recent match, the Aguilas won 1-0 with a solitary goal by Roger Martínez against Puebla. However, although for some it is not a spectacular America, the Azulcremas find themselves at the top of the table. They are in third place with 10 points from three wins (San Luis, Juárez, Puebla), one draw (Santos) and one defeat (Rayados).
5:47 PM22 days ago

The America vs Queretaro match will be played at the stadium Azteca, in CDMX, Mexico. The kick-off is scheduled at 10:00pm ET.
5:42 PM22 days ago

Welcome to VAVEL.com’s LIVE coverage of the 2021 Liga MX: America vs Queretaro.