It's over! Juárez, for the first time with people at home during this tournament, is beaten at home.
9:44 PM2 months ago

Goal, goal, goal for Rayados! Alvarado enters the area and takes a shot, Palos can't do anything and that's six goals for the home team.
9:39 PM2 months ago

Double change for the visitors. Funes Mori and Vincent Janssen are replaced by Alfonso Alvarado and Celso Ortíz.
9:37 PM2 months ago

Monterrey's goal! Funes Mori takes advantage of Pabón's service and scores his double and the fifth goal.
9:32 PM2 months ago

Goalkeeper! Palos dives in and with a good handball avoids the fifth goal against.
9:29 PM2 months ago

Funes Mori's shot, but the ball goes over the top.
9:22 PM2 months ago

Good play by Pabón, who plays to Funes Mori, but the latter makes a mistake and misses a clear opportunity.
9:21 PM2 months ago

Double change for Rayados. Maxi Meza and Sebastián Vegas are replaced by Dorlan Pabón and César Montes.
9:19 PM2 months ago

The Dutchman wants a hat-trick! Janssen entered Palos' area and took a shot, but the ball went wide.
9:18 PM2 months ago

Juarez tries to reach Gonzalez's goal, but the Rayados are attentive to prevent them from penetrating their defense.
9:10 PM2 months ago

Goal for Rayados! Vincent Janssen takes a long-range shot and scores his brace.
9:07 PM2 months ago

Monterrey scores! Rogelio Funes Mori sends in a blast and Palos can't do anything to prevent the third.
9:06 PM2 months ago

The second half kicks off at the Olímpico Benito Juárez
8:52 PM2 months ago

The first half ends, a very lively game at the border.
8:51 PM2 months ago

Marco Fabián had the courage to shoot from outside the area, but the ball went just wide.
8:48 PM2 months ago

A good attempt by Rayados, looking to generate danger, but the Juárez defense was attentive to keep the ball out of the box.
8:45 PM2 months ago

Uff! Velázquez heads inside the area, but the ball goes over the goal.
8:43 PM2 months ago

Juárez goal! Excellent definition by Lezcano, where even though the goalkeeper interfered, he did not prevent the home team from scoring.
8:35 PM2 months ago

Goal for Rayados! Vincent Janssen shoots inside the box to open the scoring.
8:31 PM2 months ago

The game starts, both need  the three points
8:06 PM2 months ago

In the stadium the entrance of the fans is carried out with all the protocols.

Juarez has only managed to beat Monterrey.

They arrived at the stadium!

The visitors are already present at the Estadio Olímpico Benito Juárez, where they will play their ninth match of the tournament.

This afternoon, Juarez fans will be able to enter the stadium to watch their team's game after a long absence.

Do not miss a detail of the match with the live updates and commentaries of VAVEL. Follow along with us all the details, commentaries, analysis and lineups for this Juarez vs Monterrey match.
7:31 PM2 months ago

How to watch Juarez vs Monterrey Live TV and Stream

If you want to watch the game on TV, your options are: TUDN and TV Azteca.

Adding up little by little!

The Rayados, currently coached by Javier Aguirre, come into this match after a draw against Xolos at the BBVA. With three draws and three wins, Monterrey will be looking to make it three points and climb up the standings. 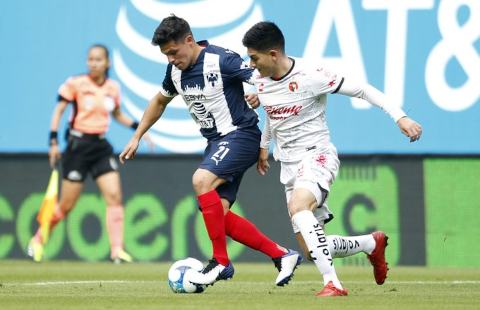 No head or tail!

La Frontera still can't find their game and come into this match in 14th place, after their last defeat against Santos, three goals to two. The team coached by Tena has only two wins and two draws, the rest of the matches have been defeats, which is why they urgently need these three points.
7:06 PM2 months ago

The FC Juárez vs Monterrey match will be played at the stadium Olimpico Benito Juarez, in Ciudad Juárez. The kick-off is scheduled at 08:00pm ET.
7:01 PM2 months ago