It's over! Cruz Azul takes the match by the minimum.
11:52 PMa month ago

Always no! Pablo Aguilar doesn't leave, the referee only shows him a caution
11:45 PMa month ago

VAR! The video referee calls the referee to review the sending off of Aguilar.
11:44 PMa month ago

He's leaving! The referee sends off Pablo Aguilar for a strong tackle on Funes Mori.
11:39 PMa month ago

Uff! Brayan Angulo's shot, but the ball goes well over the goal.
11:35 PMa month ago

Save the arc! Hugo Gonzalez prevents the equalizer from going in
11:28 PMa month ago

Goalkeeper! Great header from Romo, but Gonzalez, attentive, prevents the second from going in.
11:25 PMa month ago

Double change for the visitors. Stefan Medina and Vincent Janssen are replaced by Miguel Layún and Ake Loba.
11:24 PMa month ago

Close! Alvarado's header ends up going over the goal.
11:22 PMa month ago

Change of Monterrey. Alfonso González comes on for Alfonso Alvarado.
11:19 PMa month ago

Out of place! Corona was fouled inside the area, but Funes Mori was offside.
11:10 PMa month ago

Defensive header prevents Cruz Azul from looking for a second.
11:06 PMa month ago

At the start of the second half, Monterrey will be looking for a comeback.
10:50 PMa month ago

At the end of the first half, Cruz Azul goes into the break with the lead.
10:45 PMa month ago

Goal for Cruz Azul! After Rivero's cross, Alvarado appears inside the box and ties the match.
10:40 PMa month ago

Nothing! Funes Mori scored the first, but the referee pointed to offside.
10:38 PMa month ago

Baca takes a cross outside the area and sends a shot that ends up going wide.
10:37 PMa month ago

Attention! A cross from the Celeste offense, but Nico Sánchez deflects the ball.
10:24 PMa month ago

A good defensive rebound prevents Rayados from creating danger in the Celeste area.
10:23 PMa month ago

Goalkeeper! Great shot by Monterrey that ends up deflected by Corona.
10:22 PMa month ago

A tight encounter in the midfield, with few chances.
10:11 PMa month ago

The match kicks off at the Azteca Stadium.
10:06 PMa month ago

The regios already have their jerseys ready for their new match.

The light blue ones are here!

Cruz Azul is already present at the Azteca Stadium, ready to play their eleventh match of this tournament.

The locals with an advantage!

In the history of the meetings between these teams, Cruz Azul has the advantage.

La Pandilla' is already present at the Azteca stadium, where they will be looking for the three points.

Do not miss a detail of the match with the live updates and commentaries of VAVEL. Follow along with us all the details, commentaries, analysis and lineups for this Cruz Azul vs Monterrey match.
9:31 PMa month ago

Monterrey with ups and downs!

Aguirre's men come into this match after drawing their pending game against León and previously beating Querétaro by two goals to one. Despite being in third place, the regios have not been able to stabilize their position.
9:11 PMa month ago

The Machine comes with everything!

After 11 matches, Reynoso's men are undefeated in eight games. In their last match, the light-blue team defeated Pumas by the slimmest of margins, and this time they will be looking to emerge victorious against the team from the north of the country. 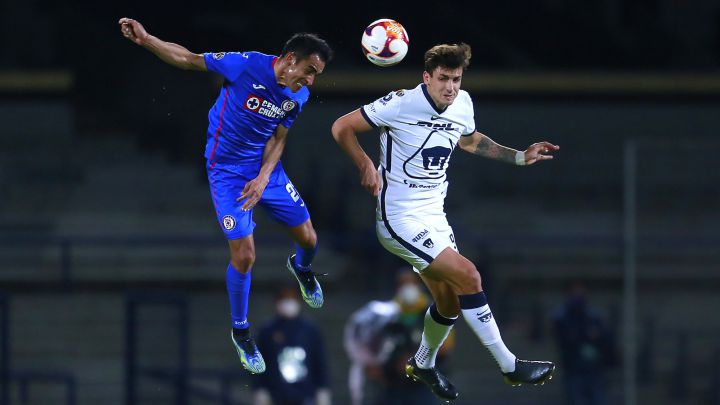 The Cruz Azul vs Monterrey match will be played at the Azteca stadium, in Mexico City. The kick-off is scheduled at 08:00pm ET.
9:01 PMa month ago

Welcome to VAVEL.com’s LIVE coverage of the 2021 Guard1anes match: Cruz Azul vs Monterrey!