It's over! The match ends in favor of the home team, Atlas managed to close the gap but it wasn't enough and the away team falls.
9:59 PMa month ago

It's over! The match ends in favor of the home team, Atlas managed to close the gap but it wasn't enough and the away team falls.
9:56 PMa month ago

Atlas scores! Milton Caraglio scores the second for the visitors from the penalty spot.
9:55 PMa month ago

Penalty! The referee signals a foul by 'Shaggy' on Rocha inside the area and awards the penalty.
9:55 PMa month ago

VAR! The referee will review a play in favor of the Red and Blacks, a possible penalty kick.
9:54 PMa month ago

VAR! The referee will review a play in favor of the Red and Blacks, a possible penalty kick.
9:54 PMa month ago

Again the goalkeeper! Rocha's shot, but Corona is attentive to prevent his goal from falling.
9:52 PMa month ago

What Atlas missed! The ball drifts into the area, Caraglio appears, but ends up crashing it into Corona.
9:44 PMa month ago

Goalkeeper! Corona attentively holds on to a ball that was heading dangerously towards his goal after Trejo's header.
9:40 PMa month ago

Cruz Azul's goal! After a shot was parried by his defender, Jonathan Rodríguez drove the length of the field and scored in perfect fashion to score the third for the home side.
9:39 PMa month ago

Goal by Cruz Azul! Good pass from Romo to Jonathan Rodriguez, who finishes correctly after Vargas has beaten him and scores the second.
9:26 PMa month ago

Good rebound by Barbosa, preventing Rodriguez from hitting the ball and creating danger in the red-and-black area.
9:23 PMa month ago

Few chances for Cruz Azul and none for Atlas in these first minutes of the second half.
9:14 PMa month ago

Change of Cruz Azul. Yotún comes off and 'Shaggy' Martínez takes his place.
9:11 PMa month ago

A dangerous play by Atlas, where after Barbosa's cross, Caraglio lets the ball go through and Romo ends up rejecting it.
9:08 PMa month ago

The second half kicked off at the Coloso de Santa Ursula.
8:49 PMa month ago

End of the first half! A somewhat lively match, where both teams have responded and the score is tied at one goal.
8:45 PMa month ago

Corona! Malcorra's shot, but the home keeper is alert to keep the ball out.
8:40 PMa month ago

Atlas goal! After Malcorra's service, Anderson Santamaría controls inside the box and scores the equalizer.
8:38 PMa month ago

Goalkeeper! Malcorra arrived alone, but when he shot, Corona managed to block the shot and deflected the ball.
8:35 PMa month ago

A tight match, with few arrivals from both sides.
8:23 PMa month ago

Ibarra had a good start and ended up shooting, but Corona was attentive, deflected the ball and prevented the game from being tied.
8:19 PMa month ago

A prefabricated play where Jairo Torres turns and when he hits the ball he ends up crashing it into the opponent.
8:14 PMa month ago

Rodriguez again! A cross that the 'Cabecita' takes advantage of and heads in, but the ball ends up going slightly wide.
8:13 PMa month ago

Jonathan Rodríguez made a dangerous run, but his shot ended up in the hands of Vargas without any problems.
8:10 PMa month ago

Goal for Cruz Azul! Brayan Angulo sends an accurate header after Romo's cross and embeds the ball in the back of Vargas' net.
8:03 PMa month ago

The match between Cruz Azul and Atlas kicks off!
7:58 PMa month ago

Already on the field!

The red-and-black players take the field for warm-ups.

Milton Caraglio has not scored since 2019, so tonight he will be looking to break the drought.

The locals with an advantage!

In historical encounters, Cruz Azul is ahead of the red-and-black team.

The foxes have arrived!

With Diego Cocca at the helm, Atlas is already present at the home of Cruz Azul.
7:28 PMa month ago

The Celestes have already arrived at the Azteca Stadium, where they will seek to continue their undefeated streak against Atlas.

Do not miss a detail of the match with the live updates and commentaries of VAVEL. Follow along with us all the details, commentaries, analysis and lineups for this Cruz Azul vs Atlas match.
7:18 PMa month ago

How to watch Cruz Azul vs Atlas Live TV and Stream

With Reynoso at the helm, Cruz Azul has gone nine matches without defeat; this afternoon, they will be looking to do the same at home and add their tenth positive result and thus continue to consolidate their position at the top of the table. 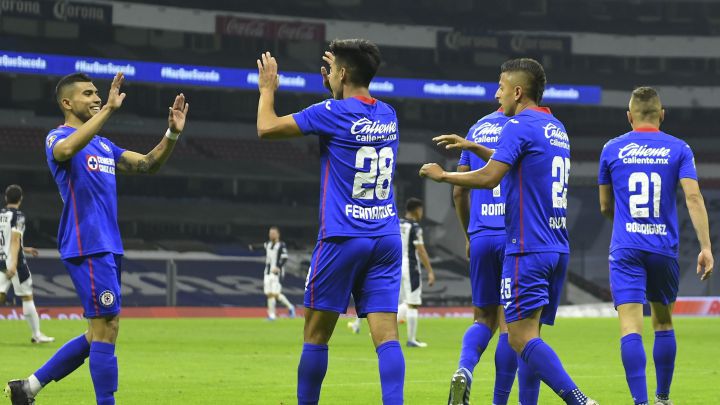 The Cruz Azul vs Atlas match will be played at the Azteca stadium, in Mexico City. The kick-off is scheduled at 09:00pm ET.
6:48 PMa month ago

Welcome to VAVEL.com’s LIVE coverage of the 2021 Guard1anes match: Cruz Azul vs Atlas!