It's over! Mazatlan fails to tie the game and is eliminated from the final phase, Monterrey goes straight to the Liguilla.
10:51 PM4 days ago

Goalkeeper! Hugo González prevents the equalizer, Mazatlán is on top looking for the goal.
10:46 PM4 days ago

Double change for the home team. Avilés Hurtado and Dorlan Pabón are substituted.
10:36 PM4 days ago

He's leaving!!! Mazatlan's Giovanni Oliveira is sent off after a strong tackle on Maxi Meza.
10:32 PM4 days ago

Janssen crosses for Janssen, but Vikonis anticipates and prevents the second.
10:29 PM4 days ago

Goo...! Canceled! Camilo Sanvezzo scored the equalizer, but it was disallowed for offside.
10:24 PM4 days ago

Change for Monterrey. Celso Ortíz comes off and Kranevitter takes his place.
10:24 PM4 days ago

Rodriguez's shot is saved by Vikonis, then Ake Loba counter-attacks, but his ball goes into the stands.
10:16 PM4 days ago

Gallardo's cross that Rodriguez fails to connect with
10:13 PM4 days ago

The complement starts at the BBVA
9:55 PM4 days ago

At the end of the first half, Monterrey goes to the dressing room with the lead.
9:55 PM4 days ago

The one Janssen missed! After the goalkeeper came out, Janssen tried to shoot, but Vargas ended up clearing the ball.
9:52 PM4 days ago

Monterrey wants the second! Great combination between Ake Loba and Gallardo that culminates in a shot by the latter and the ball goes slightly wide.
9:48 PM4 days ago

Mazatlan arrived with danger, but Hugo Gonzalez kept the ball that was too long.
9:41 PM4 days ago

Uff! A pass to Rodriguez that is played to Ake Loba, who sends the ball to the goal, but Vikonis deflects the ball with his hand.
9:39 PM4 days ago

A save! Vikonis dives after Loba's header, saving the second
9:24 PM4 days ago

Monterrey's goal! Vincent Janssen finds a drifting ball and gives the home side the lead.
9:21 PM4 days ago

Poste! Miguel Layún's shot ends up crashing against the crossbar.
9:17 PM4 days ago

The match was a hard-fought affair, with both teams making some chances.
9:08 PM4 days ago

Meeting kicks off in Monterrey
9:03 PM4 days ago

If Mazatlan wants to qualify for the playoffs, they have to win or tie to be the final playoff invitee.
8:58 PM4 days ago

Uff! Mazatlan is ready to go!

The visitors are already warming up before the start of the match.

La Pandilla' is already at the BBVA, where they will play their last match of the regular tournament in an attempt to qualify directly for the Liguilla.

Mazatlan's dressing room is also ready with all the jerseys that the players will be wearing tonight.

The Rayados already have their kit ready for tonight's match.

Do not miss a detail of the match with the live updates and commentaries of VAVEL. Follow along with us all the details, commentaries, analysis and lineups for this Monterrey vs Mazatlan match.
8:23 PM4 days ago

How to watch Monterrey vs Mazatlan Live TV and Stream 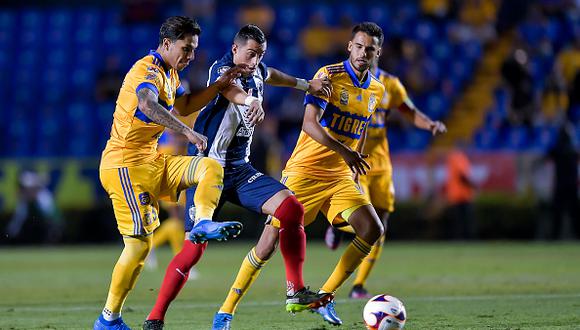 Mazatlan still has hopes of qualifying for the playoffs, but must wait for the results of previous matches. The Sinaloa team's last match was against León.

The Monterrey vs Mazatlan match will be played at the BBVA stadium, in Nuevo Leon, Monterrey. The kick-off is scheduled at 10:00pm ET.
7:53 PM4 days ago

Welcome to VAVEL.com’s LIVE coverage of the 2021 Guard1anes match: Monterrey vs Mazatlan!