It's over!!! Brazil scores the fourth. Mexico falls in penalty kicks and will be looking for the third place of this edition of the Olympic Games.
6:40 AMa year ago

Goal Mexico!!! Carlos Rodriguez lights the candle and scores the first for the Mexicans.
6:39 AMa year ago

He missed it! Johan Vasquez sends his shot to the post and Mexico hasn't scored any!
6:37 AMa year ago

Goal Brazil!!! Martinelli scores the second from the penalty spot
6:37 AMa year ago

Santos saved it! Eduardo Aguirre shot the first one for Mexico and the goalkeeper saves it!
6:36 AMa year ago

It's over!!! The match will be defined in penalty kicks
6:29 AMa year ago

Mexico is on top of the opponent's goal, but the Brazilian defense is well stopped and avoids the goal.
6:15 AMa year ago

The action restarts, the second overtime is already running in Kashima.
6:13 AMa year ago

End of the first extra time, the score remains unopened in Tokyo.
6:10 AMa year ago

Left-footed shot by Arana, but the ball goes wide of the goal.
6:09 AMa year ago

Excellent play by Lainez culminates in a shot by Romo that goes over the goal.
6:07 AMa year ago

Montes smashes the ball and prevents Brazil from danger.
6:04 AMa year ago

Double change for Mexico. Eduardo Aguirre and Adrián Mora are substituted by Henry Martin and Jesús Angulo.
6:03 AMa year ago

Ochoa stands up well at the back, he keeps a ball from Malcom.
5:56 AMa year ago

The first overtime starts! Both teams are looking for their pass.
5:55 AMa year ago

That's it! 90 minutes of regular time are over and everything will be defined in overtime.
5:51 AMa year ago

Mexico is saved! Ochoa comes out and Romo ends up keeping the danger away from the Mexican goal.
5:50 AMa year ago

Change of Mexico. Alexis Vega comes off for Roberto Alvarado.
5:50 AMa year ago

Good sweep by Angulo on the ball that Richarlison was trying to control.
5:47 AMa year ago

Richarlison's shot that Ochoa controls without problems.
5:43 AMa year ago

Close to Mexico! Montes' shot, but Santos keeps the ball.
5:41 AMa year ago

Post! Mexico is saved! Richarlison sends a huge header, but the ball ends up hitting the post.
5:38 AMa year ago

They are fighting! Loroña and Richarlison have a fistfight and words after an alleged foul
5:31 AMa year ago

Antony's shot at Ochoa's goal, but the Mexican ends up blocking the ball.
5:20 AMa year ago

Vega's cross, but Santos attentively holds on to the ball.
5:17 AMa year ago

A hard-fought game with chances for both teams.
5:04 AMa year ago

The second half kicks off at Kashima Stadium
5:03 AMa year ago

The first half came to an end with the score at zero.
4:46 AMa year ago

No, the one Antuna missed! Antuna tries to shoot, but Santos comes out and prevents the ball from going into his goal.
4:42 AMa year ago

Goalkeeper! Santos saves his goal! Romo's shot from Antuna's pass, but Santos is attentive to prevent his goal from falling.
4:38 AMa year ago

Close! Excellent coverage by Nino, who prevents Montes from making a good impact with the ball.
4:37 AMa year ago

The game was quite lively with Brazil on the Mexican goal, Ochoa was attentive and avoided the onslaught.
4:30 AMa year ago

It is not! The referee refutes his first decision after reviewing in the VAR and overrules the penalty kick
4:29 AMa year ago

VAR! The referee will review the play of the penalty on the Brazilian
4:29 AMa year ago

Penalty for Brazil! After a foul on Douglas, the referee awards a penalty kick.
4:23 AMa year ago

Goalkeeper! Mexico has a goalkeeper! Alves' shot, but Ochoa, attentive, leans back and prevents the ball from going in.
4:20 AMa year ago

Antony's flash, but Ochoa attentively holds on to the ball.
4:15 AMa year ago

Goalkeeper! Arana's shot, but Ochoa, attentive at the back, avoids the first with a great save.
4:12 AMa year ago

Whew, what an encounter! The match is back and forth with both sides looking to open the scoring first.
4:09 AMa year ago

Excellent save by Richarlison, preventing the ball from reaching the center of Santos' box.
4:03 AMa year ago

Antuna's speed was good, but he ends up being fouled by Arana.
4:00 AMa year ago

The first semifinal of these Olympic Games in Tokyo begins!
3:55 AMa year ago

The field is ready with the players warming up on it, both Lozano's and Brazil's players want to reach the final stage of these Olympic Games.
3:47 AMa year ago

Both Mexico and Brazil are already present in the building, where they will try to get the victory and thus reach the long-awaited final.
3:26 AMa year ago

This is what the Kashima Stadium looks like this afternoon, ready to host the match between Brazil and Mexico. 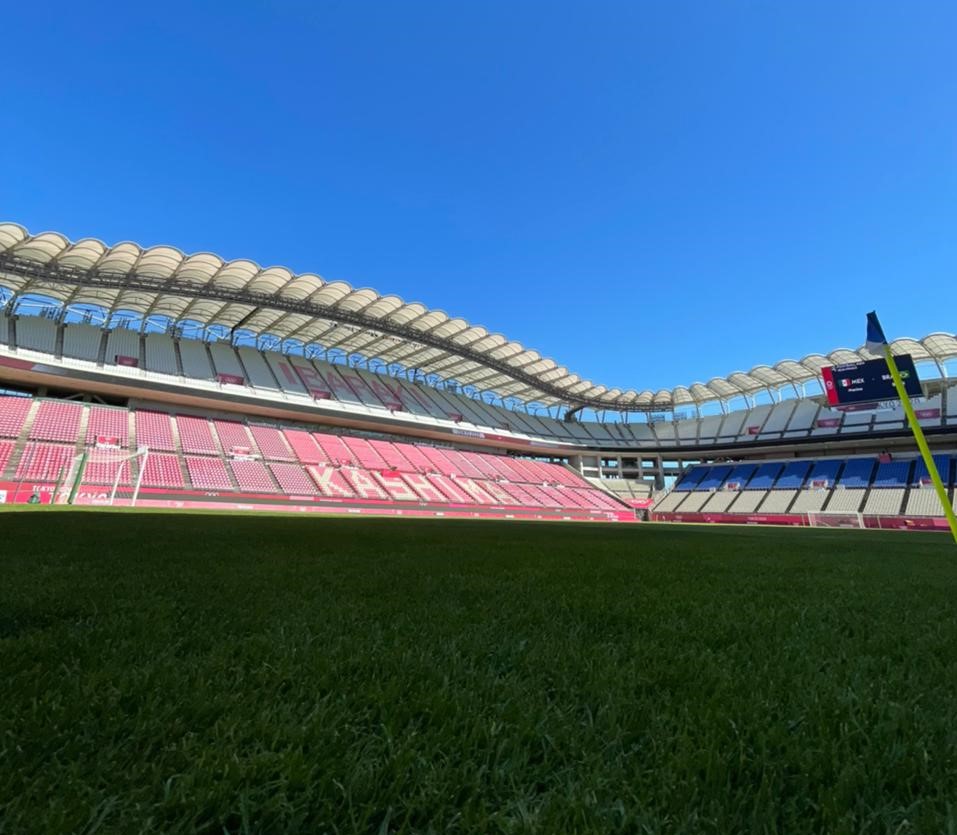 At the conference, Lozano announced that Jorge Sánchez will miss this match due to yellow cards, a complicated situation for the 'Jimmy' starting lineup.
3:10 AMa year ago

With numbers in favor

Mexico is the best offensive team in the tournament at this stage. With 14 goals scored, Henry Martin, Cordóva and company put the tricolor in an enviable position.
3:06 AMa year ago

Mexico and Brazil have only met once in an Olympic Games, in 2012. Mexico won with two goals for and one against. 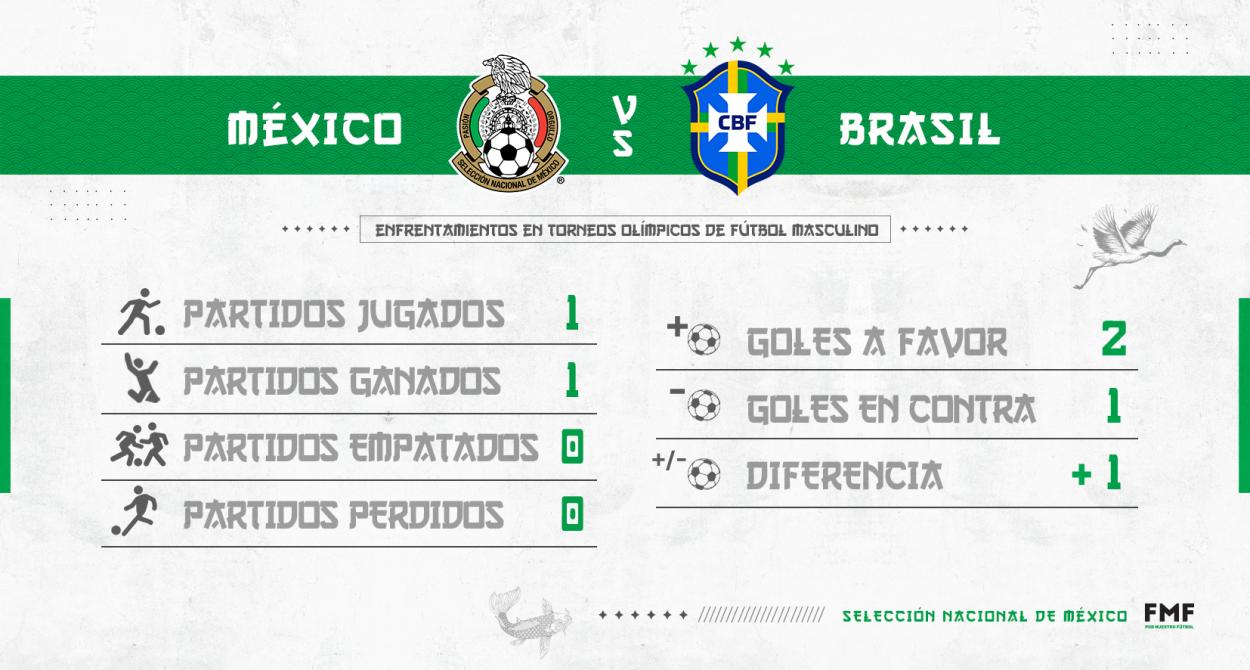 In a few moments we will share with you the starting lineups for Brazil vs Mexico live, as well as the latest information from the Kashima Stadium. Stay tuned for up-to-the-minute live online coverage of the match on VAVEL.
6:29 PMa year ago

How to watch Brazil vs Mexico Live Stream on TV andOnline?

If you want to watch the game Mexico vs Brazil live on TV, your options is: Marca Claro .

If you want to directly stream it: Streaming services and Marca Claro app.

What time is the Mexico vs Brazil match for the Tokyo 2020 Olympic Games?

This is the start time for the Mexico vs Brazil match on August 2, 2021 in several countries:

There are several players of the tricolor who have given a great performance within the team, highlighting Sebastián Córdova, Luis Romo, Eduardo Aguirre, without forgetting the great performance of Diego Lainez and also Joaquín Esquivel, who has responded in key moments for México.
6:14 PMa year ago

After the tricolor's great performance, former players such as Cuauhtémoc Blanco and Rafael Márquez expressed their opinions.

This is what Blanco wrote on social media: "Congratulations to Mexico for advancing to the next round in Tokyo-2020. Excellent celebration by Sebastián Córdova. Let's go Mexico!

Rafa Márquez, the former central defender also commented on Córdova's great performance: "Without fear of being wrong, Sebastián Córdova is the player I see with the best projection among the young Mexican players, hopefully he will soon have options to come to Europe," he wrote on his Twitter acco unt.

Mexico and Brazil have faced each other 42 times in senior national teams and once in Olympic matches, where the Mexicans have accumulated 24 defeats. Despite this, Mexico has managed to beat Brazil on 11 occasions, thus defeating them and winning official titles, both in Confederations and Gold Cups, as well as in age-limit tournaments such as the U-17 World Cup and Olympic Games.

These are the results of the most recent matches:

"We have been solid in complicated moments, and now, the team does not want to keep the result, to be a team that always proposes. I am very grateful to be part of this team and to represent my country in the best possible way. The bad news is that we are losing Jorge because of his yellow cards".

Sebastián Córdova talked about his celebration and how he saw the match against Korea: "They just gave me the '10' of América, I see a lot of people like Cuauhtémoc, and I said I'm going to celebrate a goal like him.

"As he said, I think Daniel Alves, who wanted us in the final, has already got us since once. Let's beat them and see who wins the gold meda l.

Looking for one more

Brazil arrives after a minimal score over the team, a situation that allowed the Canarinha to reach the semifinals of this edition of the Olympic Games in Tokyo 2021.

The Brazilians have 5 silver medals and 2 bronze medals in men's soccer and will be looking for a second title after winning first place in Rio 2016.

Mexico comes after finishing in second place in its group, with the sum of two wins and a loss against Japan, then measured against North Korea, a situation that made a great way and with a score of six goals to three of the Koreans reached the semifinals. 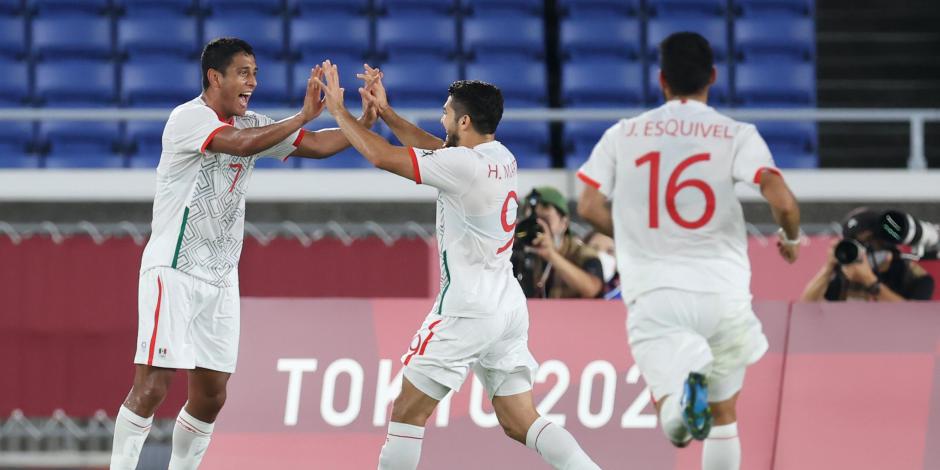 The Kashima Stadium will host the match between Mexico and Brazil, which will define the first semifinalist of this edition of the Olympic Games. The stadium has a capacity of 40,728 spectators, but will remain empty due to the pandemic and the wave in Tokyo. 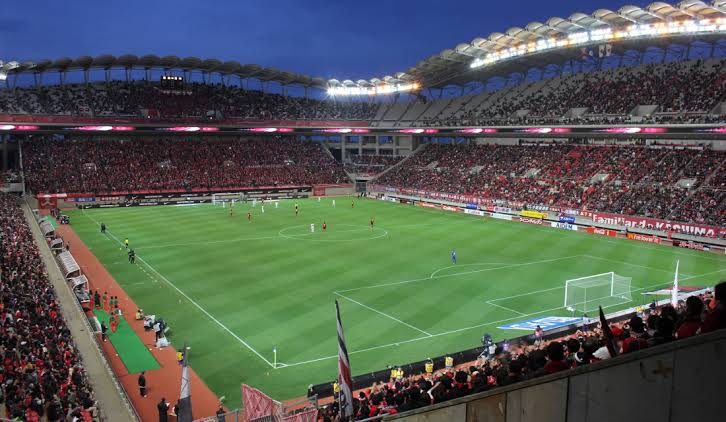 My name is Lore Solórzano and I’ll be your host for this game. We will provide you with pre-game analysis, score updates, and news as it happens live here on VAVEL. Please don't move for the most importante information of this match.