We hope you enjoyed this broadcast of Necaxa 1-2 Cruz Azul.
Stay tuned to VAVEL for more information and live games from Liga MX and other sports.
11:11 PM4 months ago

First victory for the Machine

The current Mexican soccer champion has four points and its first win in the Apertura 2021. 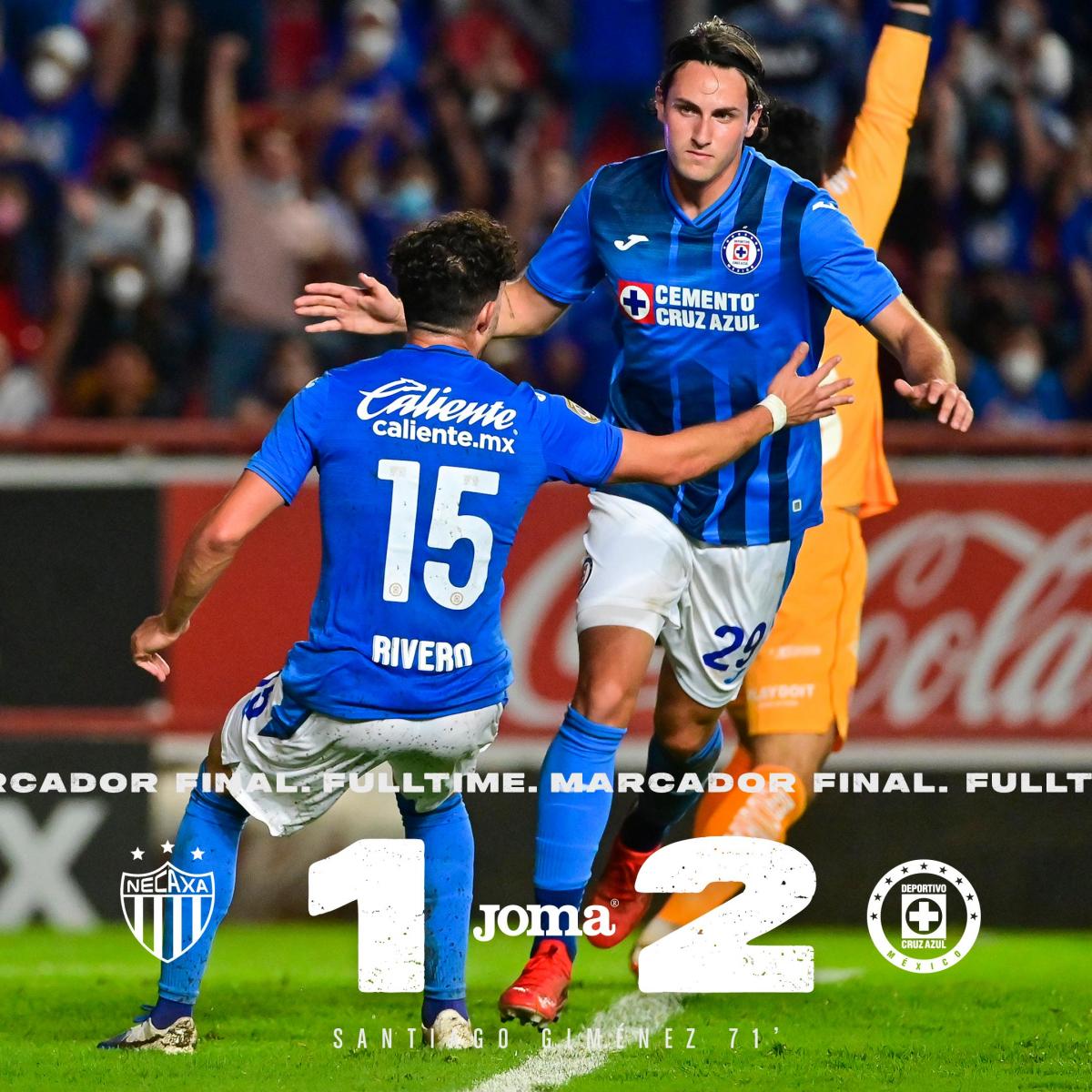 Once again, La Máquina's youth striker scored and on this occasion he gave the visitors the three points with this definition in the area.

The match ends with a victory for Cruz Azul.
The final score at the Victoria Stadium is: Necaxa 1-2 Cruz Azul.
11:01 PM4 months ago

A long cross into the area that Gudiño wins with his hands.
10:58 PM4 months ago

Zendejas' shot from outside the area goes wide of the goal.
10:56 PM4 months ago

Yellow card for Martínez for a foul on Necaxa's counterattack.
10:46 PM4 months ago

Oliveros takes a free kick in the six-yard box and none of the Necaxa players are able to get a shot off.
10:42 PM4 months ago

A header from newcomer Mauro Quiroga, who almost sent the ball into the upper right corner.
10:41 PM4 months ago

Giménez appeared in the area after a good pass from Orbelín to send the ball into the net in front of Hernández.
10:39 PM4 months ago

Aguirre's shot from outside the area was well caught by Gudiño after lying on the ball.
10:36 PM4 months ago

Yotún's cross into the area easily ends up in Hernández's hands.
10:31 PM4 months ago

Great play by Giménez, who comes in at speed to send a pass into the box but Oliveros cuts it off well.
10:26 PM4 months ago

Sepúlveda's shot at the near post ends up passing close to the Cruz Azul goal.
10:22 PM4 months ago

Escoboza's powerful shot from outside the area was well saved by Gudiño.
10:18 PM4 months ago

Rodriguez shot in the box in front of the goal but Hernandez made an impressive save.
10:13 PM4 months ago

Yellow card for Pablo Aguilar for a push from behind in midfield.
9:54 PM4 months ago

This is how Necaxa tied it

Great shot by Zendejas to beat the Cruz Azul goalkeeper with power.

Medina's long-range shot goes into the hands of Gudiño.
9:45 PM4 months ago

The Paraguayan defender got into the box in this way to assist Angulo for the first goal of the night.

Zendejas sends the ball into the corner with great power to beat Gudiño from the penalty spot.

The equalizer at the Victoria stadium!

After a VAR review, Adonai gave Necaxa a penalty kick for an infraction by Domínguez on Formiliano in the box.
9:34 PM4 months ago

Cruz Azul made a short move from the corner kick and after a feint by Escobar, he got into the box and looked for Angulo with a low cross that ended with a shot on goal.
9:30 PM4 months ago

Pineda's shot is blocked by Formiliano.
9:23 PM4 months ago

Orbelín finds a ball in the area but when he takes a shot, he slips and the ball ends up in Hernández's hands.
9:15 PM4 months ago

Aguilar's slide that saves Cruz Azul in the first minutes of the match.
9:11 PM4 months ago

Those in charge of directing the match

This is the matchday 3 refereeing for Necaxa vs Cruz Azul:

Fans present at the Victoria stadium

The home team's fans are already arriving to cheer on their players and to get a point that will put them in the fight in the league.
Coach Memo Vázquez will be looking to win his first game at the helm of Necaxa. 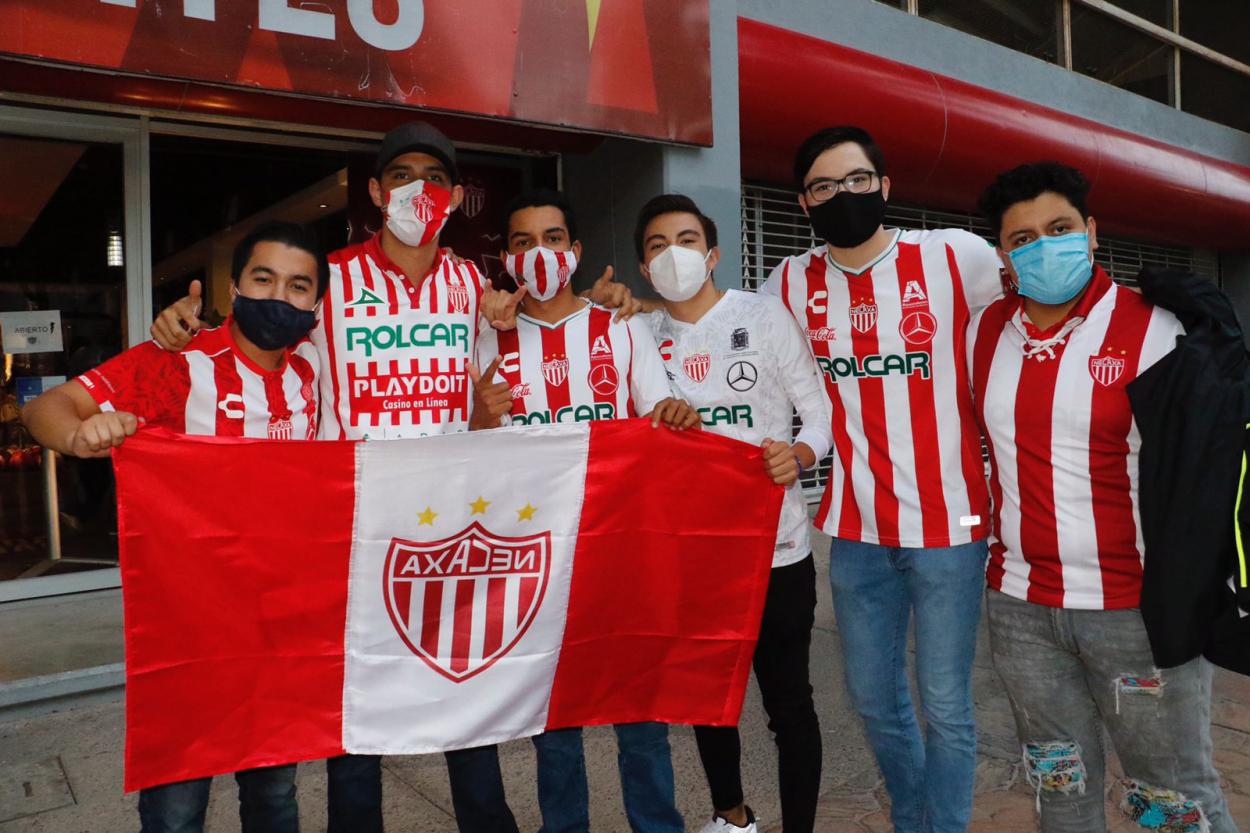 Despite the fact that the tournament began three weeks ago, the La Noria team continues to make new additions to its roster, including players who were on vacation and on national team duty, as well as the new Venezuelan reinforcement, Rómulo Otero.

The attacking midfielder arrives from Atlético Mineiro of the Brazilian league to contribute to La Máquina's attack.

Juan Reynoso will send these eleven onto the field with a 5-3-2 tactical formation:

This is how the home team will start tonight's match at the Victoria stadium with a 4-4-2 formation:

These are the three players that Reynoso will count on for tonight's match: Orbelín Pineda will start, while Jonathan Rodríguez and Yoshimar Yotún will start from the bench, but may enter at any time the Celeste tactician decides. 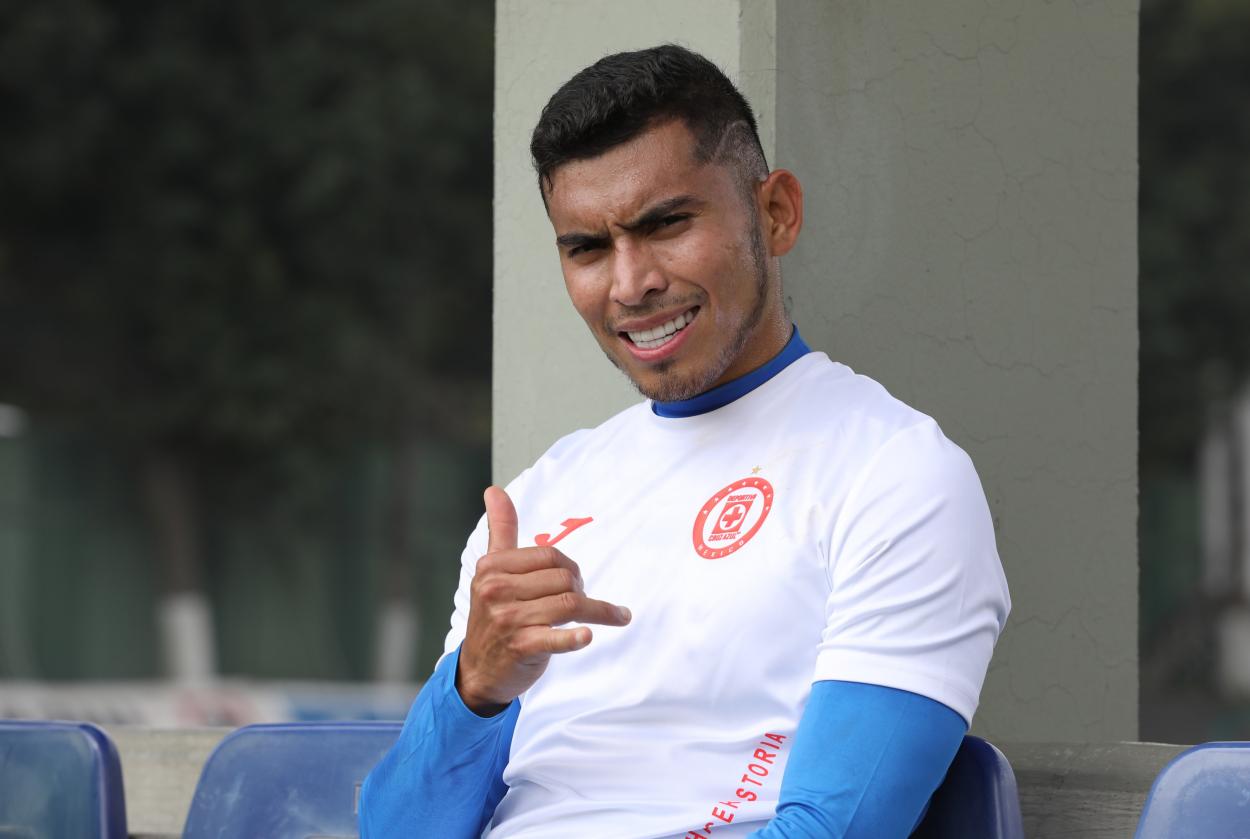 With two consecutive defeats in previous matches, the team coached by Memo Vázquez will be looking to come away with a point from their home field.

They are already at the stadium and are warming up before the match in order to go out with as much rhythm as possible. 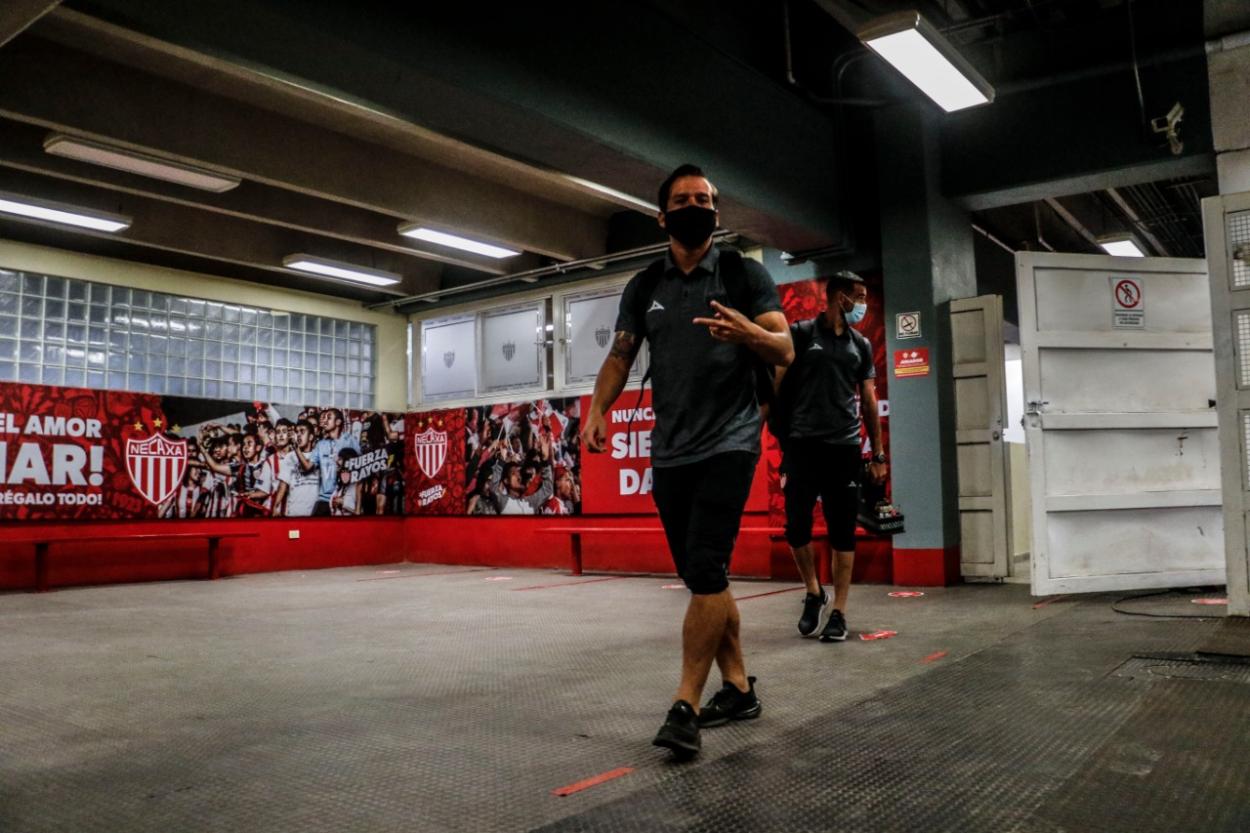 In a few moments we will present you with all the details of the match corresponding to the third matchday of Mexican soccer: Necaxa vs Cruz Azul.
Stay tuned, the lineups and minute-by-minute updates are coming!
12:24 AM4 months ago

In a few moments, we'll bring you all the details of the Necaxa vs Cruz Azul match.
You can follow the lineups, stats and minute-by-minute highlights live on VAVEL.
12:19 AM4 months ago

How and where to watch Necaxa vs Cruz Azul

You can follow the live broadcast on UniMás and TUDN USA.

If you prefer to follow the match online, remember that VAVEL USA is your best option.

With these 11 players, Juan Reynoso's team appeared against Santos Laguna:

These are the players who took the field for Necaxa to face América:

If we continue talking about youth players, Santiago Giménez is a fundamental element for Cruz Azul at present.

Whether from the bench or as a starter, he has scored very important goals for the Celeste team, such as in the previous matchday's draw against Santos.

He also showed in the last Liguilla that he knows how to impose conditions in the area, scoring in the Quarterfinals and Semifinals, and now he will have to be present to help La Máquina get out of this bad Start. 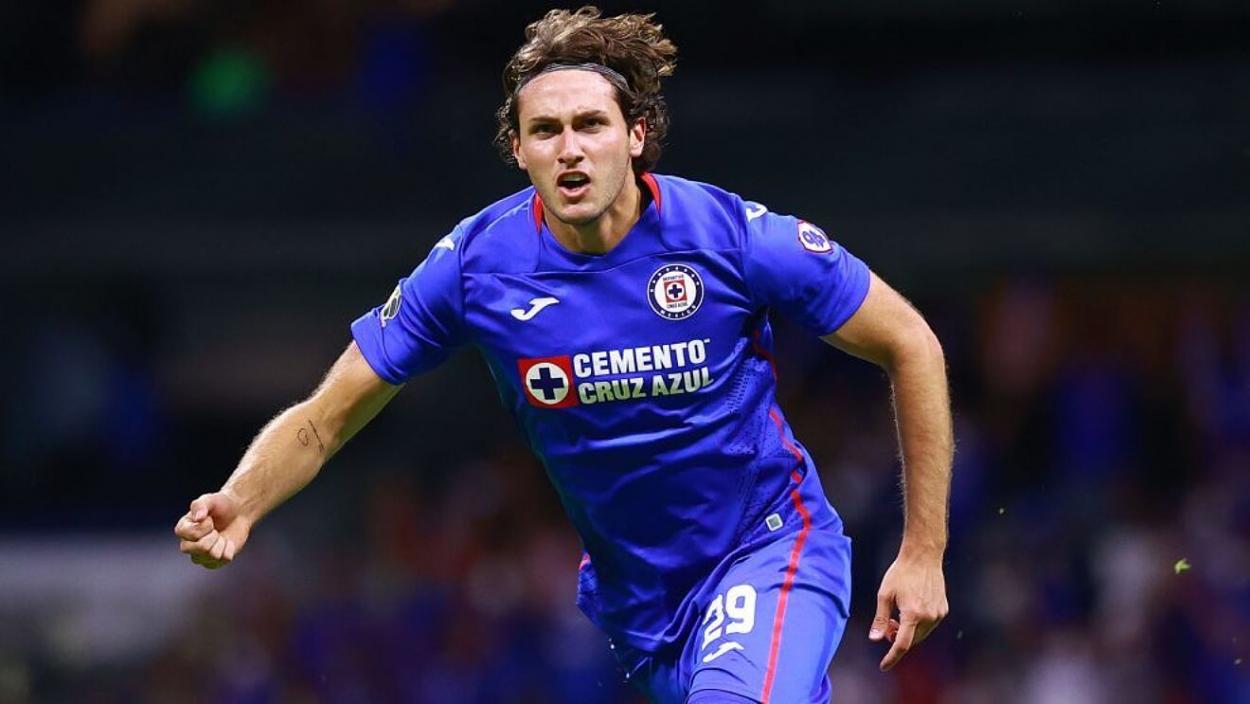 Necaxa's youth midfielder, Alejandro Zendejas, has already had the opportunity to showcase himself since last year, but these have not been the best seasons for him or for the Aguascalientes team in general.

This time he will have to show much more of his ability to recover and contribute to the team's attack, so that they can score the goals they have been missing so much.

It is worth mentioning that the only goal for the local team was scored by him in the match against América the previous matchday. 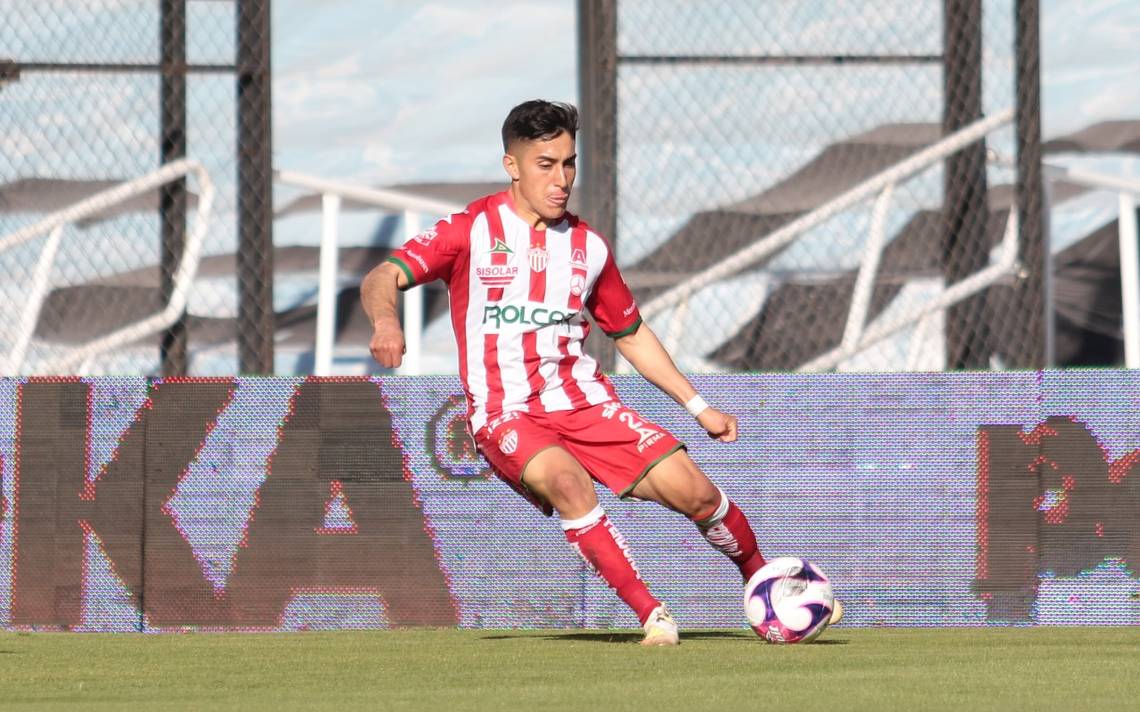 Cruz Azul will be looking for a victory

The Mexican soccer champion team will be looking for its first three points after a poor start to the season.

On the first day of the season, they lost to Mazatlán at home with a convincing 2-0 score and then went to Coahuila to draw with Santos Laguna 1-1.

Today, with some players returning from national team duty and vacations, they will be looking for their three points of the tournament to get out of this bad streak.

Necaxa will try to avoid defeat

The "hydro-rayos" team has suffered two consecutive defeats, which marks a bad start for the team coached by Memo Vázquez.

However, this time they will be looking to get out of this bad streak after losing their last game against América with a tight score of 2-1 and a performance that was acceptable but was not enough to tie the game.

The match will be played at the Victoria stadium

The Necaxa vs Cruz Azul match will be played at the stadium Victoria on Aguascalientes, Mexico with a capacity of 25,500 people.

This stadium already has a long history in Mexican soccer, having been the home of Necaxa since 2003.

The name of the stadium was sold in a 25-year concession to Grupo Modelo, which assigned the name Victoria to the stadium after the brand name of one of its beers.

My name is  Salvador Espino and I’ll be your host for this game.

Today we have prepared for you a matchday 3 game that promises good soccer, as these two teams have not had the best start to the tournament and are looking to get out of the bottom of the general table.

Cruz Azul is in 13th place with one point, while the team from Aguascalientes is in second to last place with two consecutive defeats.