Pachuca tries to score, but América is well positioned at the back and avoids the dangerous arrivals.
9:54 PMa month ago

Close to the third! After Masciarelli's clearance, the striker shoots at goal and comes within a whisker of scoring.
9:41 PMa month ago

Romina Ríos' left-footed shot and the ball came within a whisker of entering the goal.
9:29 PMa month ago

America's goal! Fatima Arellano's own goal as she tries to clear the ball and the ball ends up going the wrong way into the net.
9:23 PMa month ago

Pachuca is saved! Hernandez enters the box and shoots, Barrera covers well and the ball hits the crossbar, then another attacker shoots, but the ball goes wide.
9:21 PMa month ago

Change of América due to injury. Monserrat Hernández enters for Kiana Palacios
9:20 PMa month ago

He will not be able to continue! Kiana Palacios sprained her ankle after an attacking play and leaves the field on a stretcher.
9:19 PMa month ago

Barriers again! Farías' header and the goalkeeper appears again to prevent the second.
9:10 PMa month ago

Masciarelli avoids Salazar's cross and ends up pushing the ball away
9:08 PMa month ago

Goal, goal, goal for America! Daniela Espinosa sent a blast from a free kick and Barreras didn't get to the ball.
9:06 PMa month ago

Goalkeeper! Great save by Barreras, who dives and prevents Ribeiro's first goal.
9:04 PMa month ago

The second half kicks off at the Hidalgo stadium; both teams will be looking for goals
8:47 PMa month ago

The first half ends with the score at zero.
8:45 PMa month ago

Again Alvarado headed inside the area, but the ball went wide again.
8:40 PMa month ago

Uff! A shot from outside the area by Angeles, but the ball goes slightly wide.
8:37 PMa month ago

Karla Nieto sends in a cross for Alvarado, but her header misses the target and goes wide.
8:33 PMa month ago

Ball to Lizbeth Ángeles, but Saldívar attentively cuts off the ball.
8:32 PMa month ago

Pachuca tries, but the visiting defense is well stopped and prevents them from creating danger.
8:19 PMa month ago

One more! Stephanie Ribeiro shoots in front of goal after a pass from Espinosa, but the ball goes wide.
8:10 PMa month ago

Goalkeeper! Barreras has been key for the visitors not to score, on this occasion she comes out well and with a great shot she takes the ball away from Ribeiro, preventing her from shooting.
8:07 PMa month ago

Kiana Palacios' right footed shot is blocked by Barreras at the back of the net.
8:04 PMa month ago

America comes close! Ribeiro's shot hits the goal and Daniela Espinosa tries to counter-attack, but the play is unsuccessful.
8:01 PMa month ago

The match kicked off at the Hidalgo Stadium
7:56 PMa month ago

In all the duels that have been played between these teams, América has won six duels, while the Tuzas have four victories, while in terms of goals, the locals have 15 against América, while the azulcremas have 19 goals.
7:46 PMa month ago

In this match, the goalkeepers will be key to keep a clean sheet, both Masciarelli and Barreras will be looking to give their team security from their goal.
7:33 PMa month ago

The numbers of matches between América and Pachuca Femenil at the Estadio Hidalgo are quite even, with a very evenly split record.
7:31 PMa month ago

América Femenil is already present at the stadium, ready to play this very interesting duel. 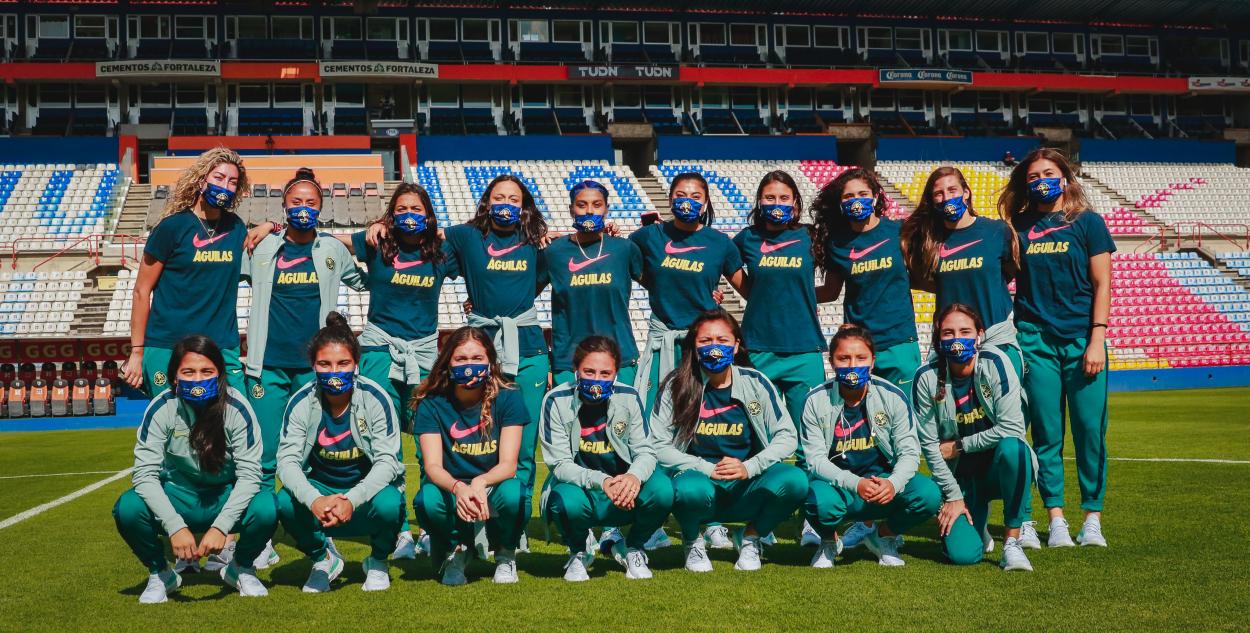 Argentine midfielder Ruth Bravo was announced prior to the start of this match as a new Tuzas player, the first foreign player in the team. 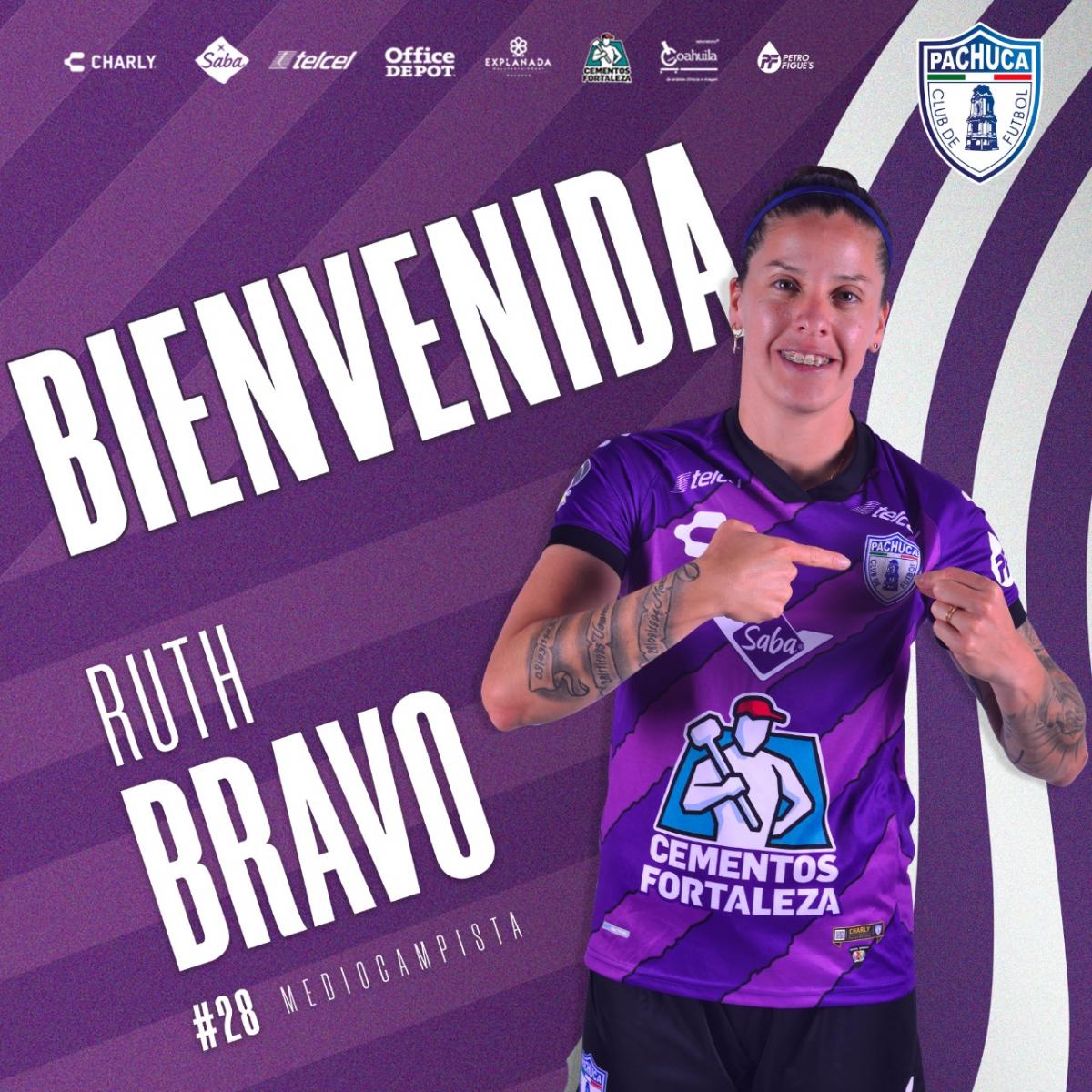 This morning, América carried out an activation at the training hotel before arriving at the Tuzo building and declaring themselves ready to play this match.
7:14 PMa month ago

Pachuca has scored 15 goals against América Femenil, five of which have been scored by Viri Salazar; the rest have been one apiece and these are the players who have scored and are still in the squad. 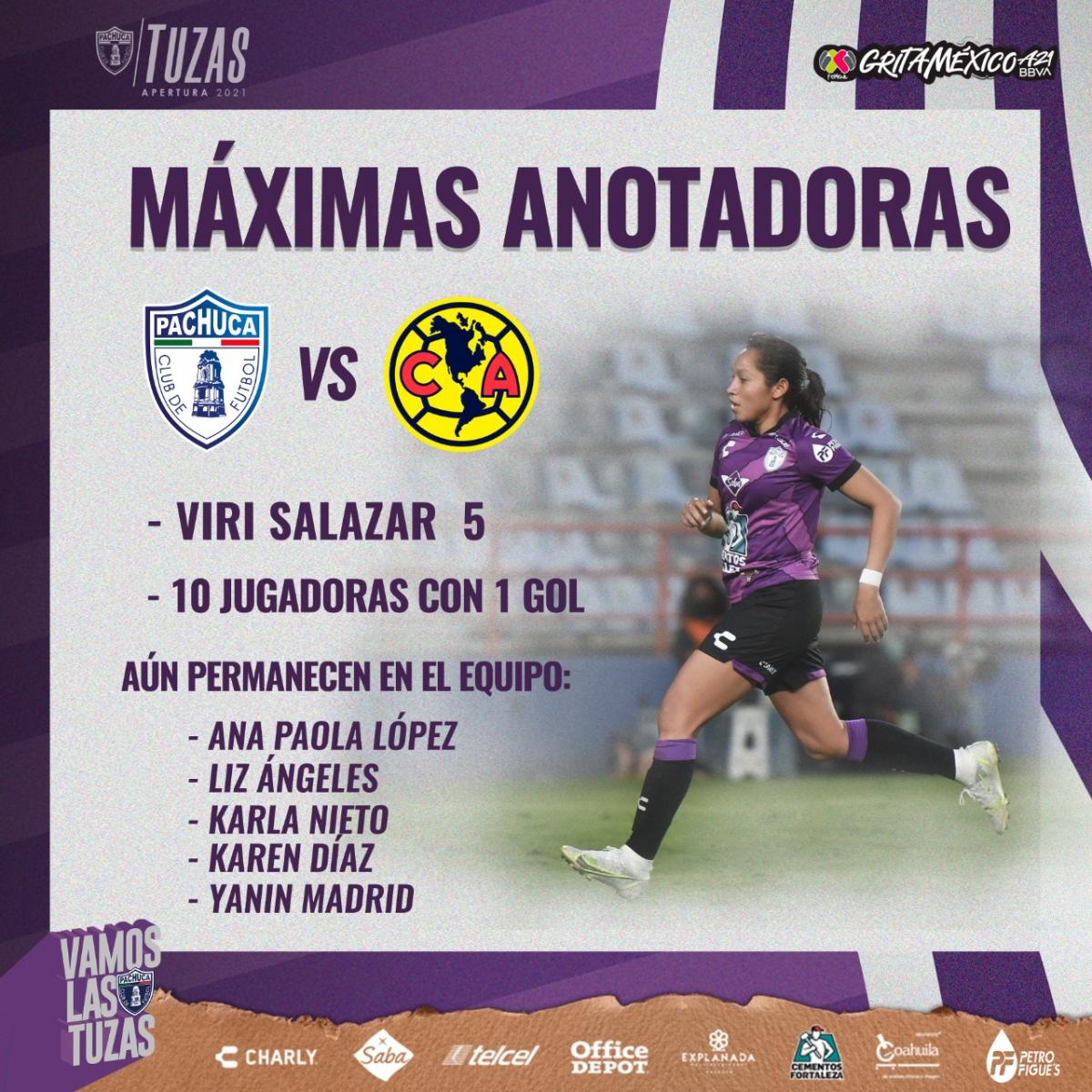 Stay tuned for the Tuzas vs América Femenil live stream.

In a few moments we will share with you the starting lineups for Tuzas vs América Femenil live, as well as the latest information from the Hidalgo Stadium. Don't miss any details of the match with VAVEL's minute-by-minute live online coverage.
7:04 PMa month ago

How to watch Tuzas vs America Femenil Live Stream on TV and Online?

If you want to watch the game Tuzas vs America Femenil  live on TV, your options is: Fox Sports.

After the departure of Toña Is, Jaime Correa was presented as Pachuca's new coach, saying at the start of the conference: "I am very excited and eager to work 100% to move this project forward.

"I think we have a great squad, great players, it's a great team and as Pachuca has always been, we will look for the championship, of course we have to go step by step, game by game, but I think we have a clear objective in mind: to win that longed-for title. With the potential and quality of each of the players and hopefully, as the days and matches go by, we will also be able to play good soccer.

Craig Harrington spoke after the loss to Toluca: "We have a lot of lessons, we have had some mistakes, but it is still very early in the season and these mistakes and lessons are going to leave us with a lot."

"We have a lot of things to work on, with the ball, without the ball and the ability to maintain possession, concentration levels and improve our movements without the ball."
"It's not why we lost the game we had a lot of chances on goal; we are very hurt in the dressing room and it weighs on us, we are at a great club. We try to give our best and we always want to get a win, but it wasn't given to us today."

He also touched on the subject of Eva González, a player who has not had the expected minutes: "Eva is fantastic, she works very well every day, she has great talent, but I have a fantastic team, that is very important; she came on in the second half, she took a hard hit and we are trying our best".

At the beginning of the week, Toña Is announced that by mutual agreement with the board of directors, her contract as technical director of the Tuzas was being terminated. In the communique she stated that the reason was due to family problems and that her stay in Mexico could no longer continue and she had to return to Spain.
6:44 PMa month ago

América Femenil had a perfect record in the tournament, however, in their last match they lost in a scandalous manner, three goals to one at the Azteca. In their first three games, the team coached by Harrington had three victories against Puebla, Querétaro and Santos, and after their last defeat, the Azulcremas will be looking to return to winning ways. 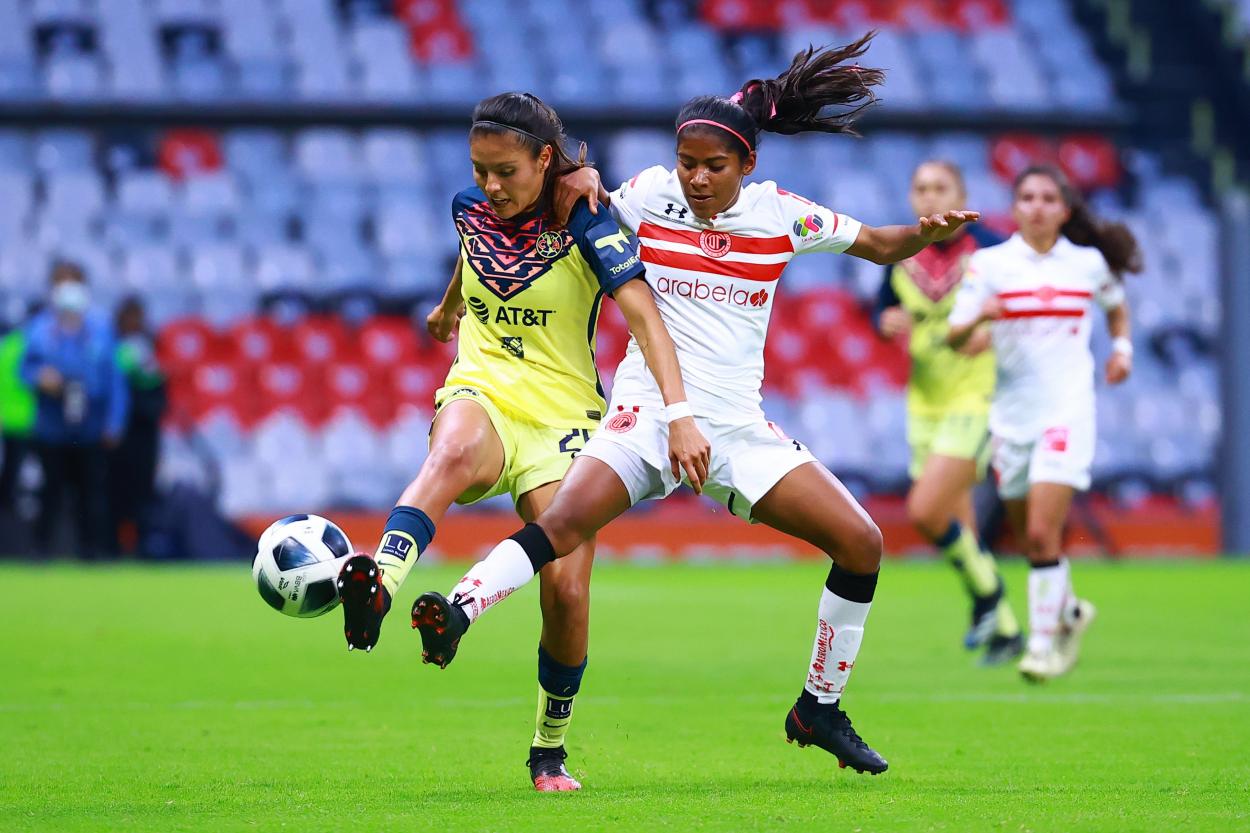 Tuzas have one win, two draws and one defeat, a situation that worries and occupies the team from Hidalgo. With a great squad, the team from La Bella Airosa will be looking for a golden victory at home and start to climb up the general table. In their last match they tied against San Luis, where the Potosinas scored their goal in the final part of the game. 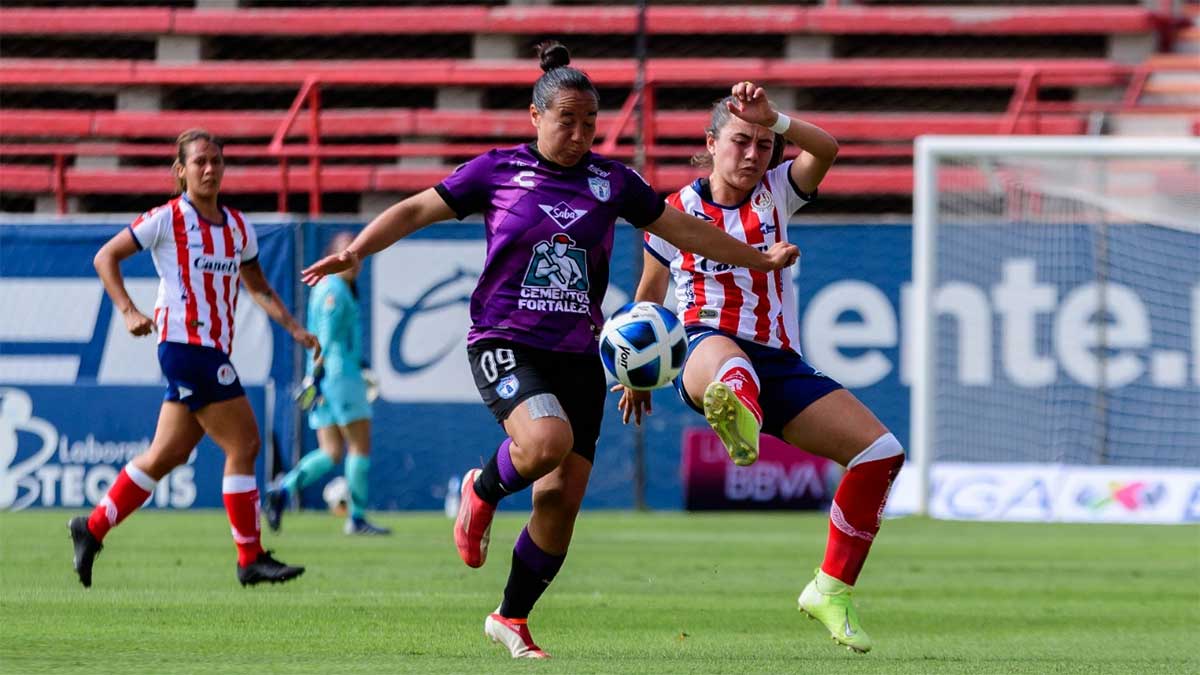 This match will take place at the Hidalgo Stadium, a game that will be played without people due to the fact that the state is under a red light. The stadium has a capacity for 25,922 people.
6:29 PMa month ago