Thank you for following the rebroadcast of the Liga MX match between Toluca and Mazatlán for Liga MX matchday 5 on VAVEL. See you next time.
8:01 PMa month ago

Once again, Toluca could not manage the scoreboard well and with the lead on two occasions they were overtaken and wasted their home advantage to win their fourth victory of the championship.
7:57 PMa month ago

Nico Díaz is cautioned for holding back a free kick.
7:53 PMa month ago

Dangerous service that the devilish defense ends up sending to the side.
7:46 PMa month ago

Ríos entered and Sánchez left, a change for Mazatlán.
7:45 PMa month ago

Rubio is left lying on the field and medical assistance arrives.
7:41 PMa month ago

Torres Nilo left and Rodríguez came on for Toluca. El Pechu left due to injury.
7:40 PMa month ago

Change for Toluca. Baeza is replaced by Estrada.
7:35 PMa month ago

Rubens' cross to the near post is blocked by Vikonis without bouncing.
7:33 PMa month ago

Collision between Barbieri and Sanvezzo, where the Brazilian takes the worst part and leaves the field momentarily.
7:28 PMa month ago

Sanvezzo with the cutback, but the defense manages to deflect the ball and it will end in a corner.
7:23 PMa month ago

Raúl López's free kick is saved by Vikonis with his fingernails.
7:21 PMa month ago

Castañeda misses the free kick and the defense rejects it from the side.
7:10 PMa month ago

Canelo's header to Vikonis' spot, but the play was ruled out for offside.
7:08 PMa month ago

Sambueza's shot from half distance went wide and, although he claimed a deflection, the referee sanctioned a goal kick.
7:06 PMa month ago

The second half begins between Toluca and Mazatlan.
6:50 PMa month ago

Emilio Sanchez in a one-on-one situation pecks the ball past the goalkeeper to make it 2-2.

Sambueza tricks Vikonis and puts the ball into the net to make it 2-1.

The referee changes his decision and there is no offside, but there is a penalty kick in favor of Toluca.
6:35 PMa month ago

The referee had called for a penalty, but it was offside.
6:34 PMa month ago

Camilo Sanvezzo takes the free kick over the wall to make it 1-1.

Sanchez is fouled on the edge of the box and Mazatlan is awarded a direct free kick.
6:28 PMa month ago

Carlos Vargas put the ball into the box, but it had already been ruled offside.
6:26 PMa month ago

Sanvezzo's long shot crashes into the defense and misses the counterattack.
6:22 PMa month ago

Pedro Canelo manages to get away from the defender and takes the angled shot, but finds Nicolás Vikonis well positioned.
6:16 PMa month ago

Sanvezzo with the service that falls short and is rejected by the defense.
6:11 PMa month ago

Ian Gonzalez headed in a corner kick to open the scoring, also thanks to a slight deflection.

Venegas' service to the near post is cut off by the defense for a corner kick.
6:06 PMa month ago

Canelo's shot goes wide of the goal.
6:04 PMa month ago

Toluca is offside and the dangerous action is quickly over.
6:01 PMa month ago

The match between Toluca and Mazatlan begins.
5:57 PMa month ago

Under Liga MX protocol, Toluca and Mazatlan take the field.
5:53 PMa month ago

In a few minutes, the match between Toluca and Mazatlán will kick off, which will open the fifth matchday of the Liga MX Apertura 2021.
5:48 PMa month ago

Toluca complying with league and sanitation protocols on and off the field. 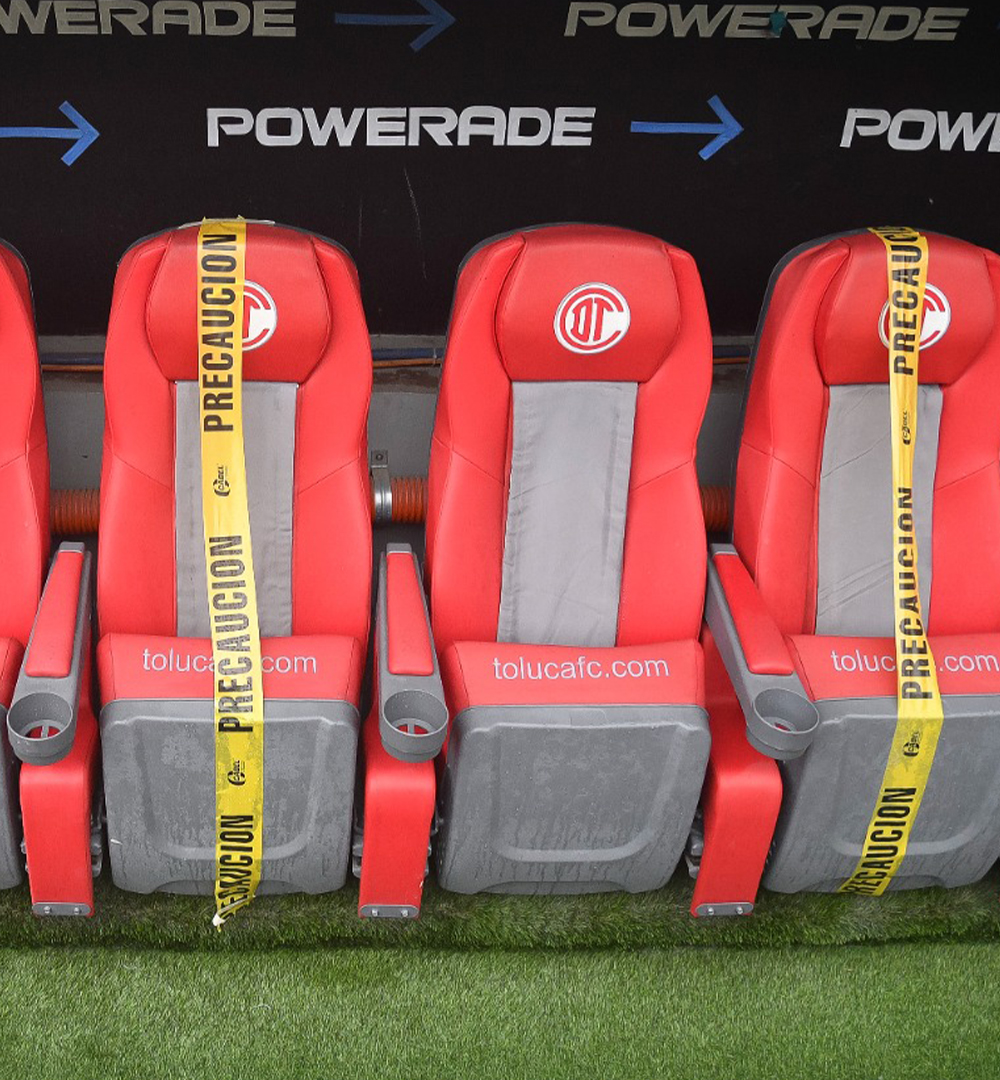 Toluca is already on the field warming up.

Jorge Padilla and Raul Lopez will lead the way on the sidelines. 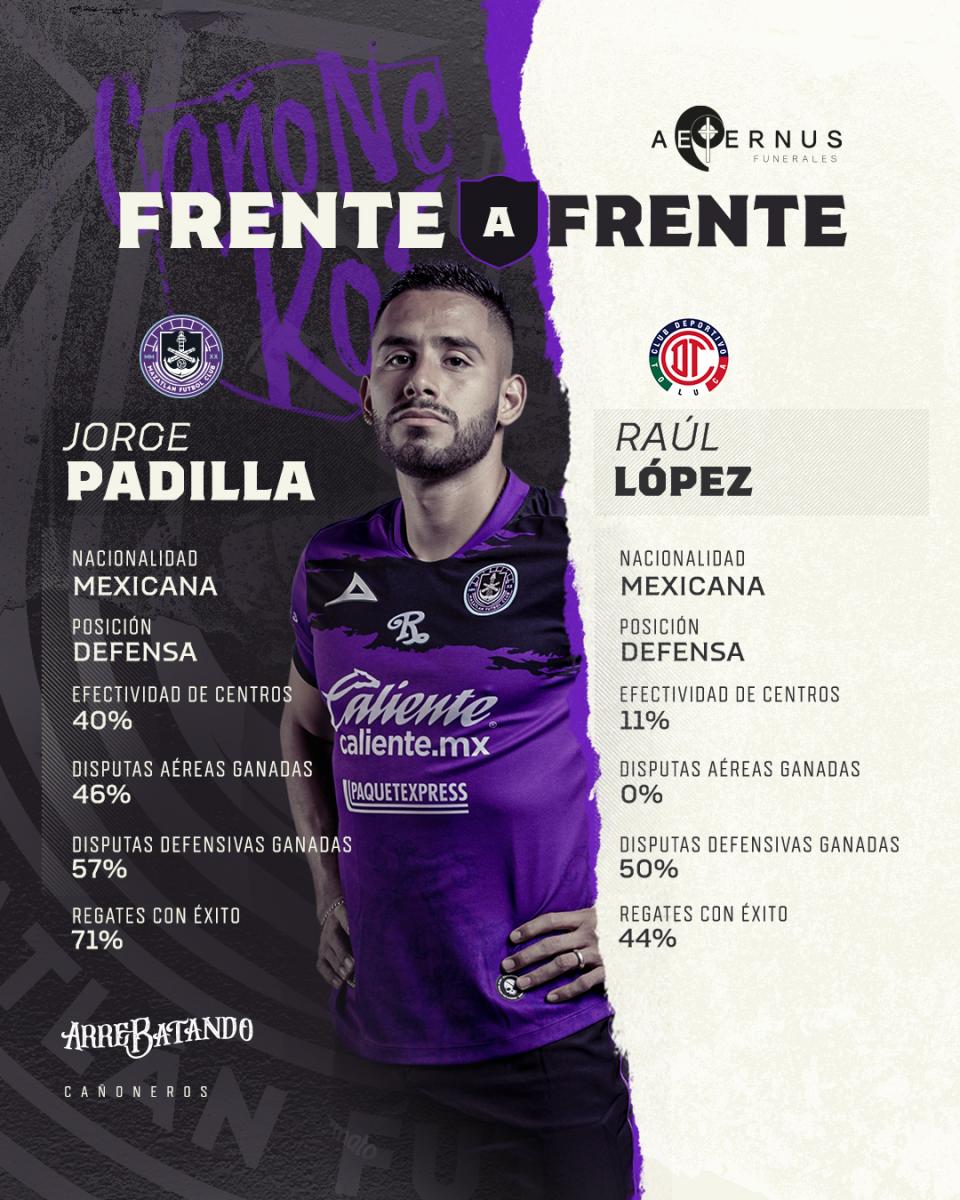 This is what hell looks like for the visitors, although Mazatlan wants its second win away from Kraken Stadium.

Complying with health protocols, Toluca arrived at the Nemesio Diez looking to remain undefeated at home. 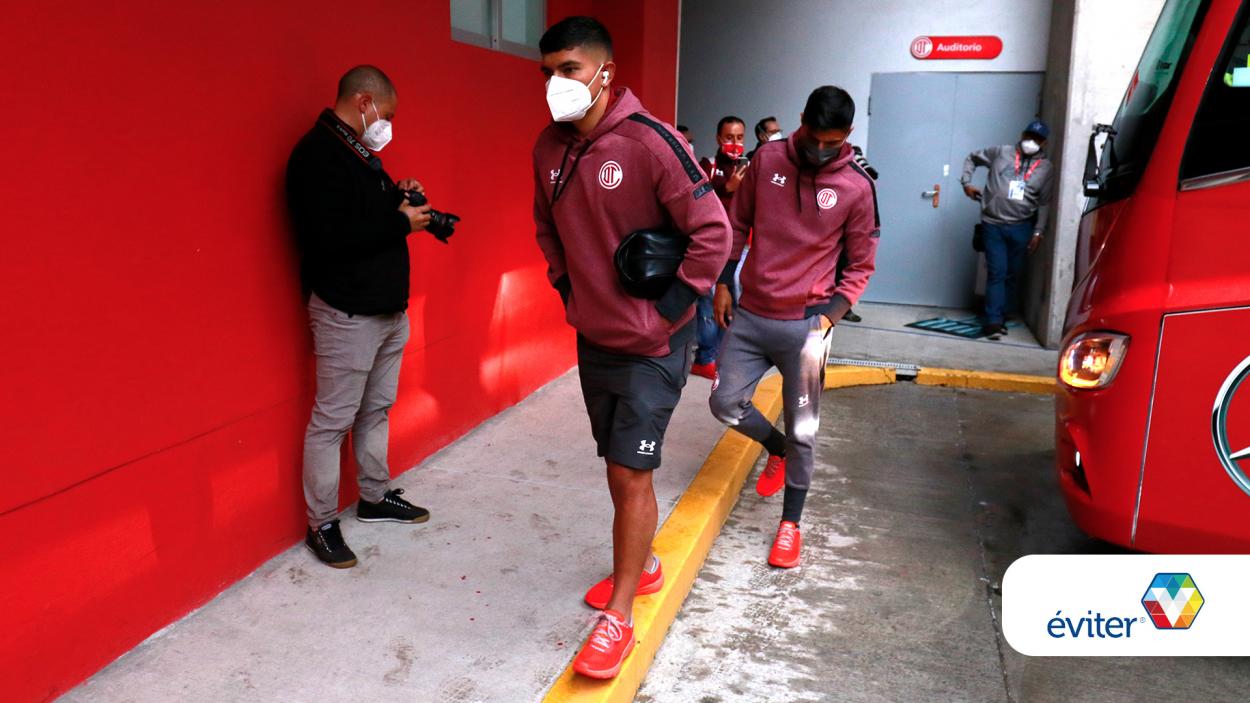 After missing the last game, Camilo Sanvezzo has rejoined the team and could start this afternoon in Mazatlán FC's starting lineup.
5:08 PMa month ago

Both Haret Ortega, due to expulsion, and Luis García, due to injury, will be the main casualties for Hernán Cristante's team, which will have to adjust after conceding four goals against Cruz Azul.
5:03 PMa month ago

The Diablos Rojos del Toluca and Mazatlán FC look to get back to winning ways as they kick off the Liga MX doubleheader week 5. We begin our coverage.
4:58 PMa month ago

Do not miss a detail of the match with the live updates and commentaries of VAVEL. Follow along with us all the details, commentaries, analysis and lineups for this Toluca vs Mazatlan match.
4:53 PMa month ago

What time is Toluca vs Mazatlan match for Liga MX?

This is the start time of the game Toluca vs Mazatlan of 17th August in several countries:

Only two matches have been played in the history of Liga MX with a win for each side in favor of the home team. The last time they played in the State of Mexico was on February 7 of this year, with a 4-1 win for the Diablos Rojos.
4:43 PMa month ago

Nicolás Vikonis is a man of great experience under the three goalposts who, despite having conceded three in the last match, will always be a reliable goalkeeper where he has shown good things since he arrived in Mexican soccer with the Franja of Puebla. 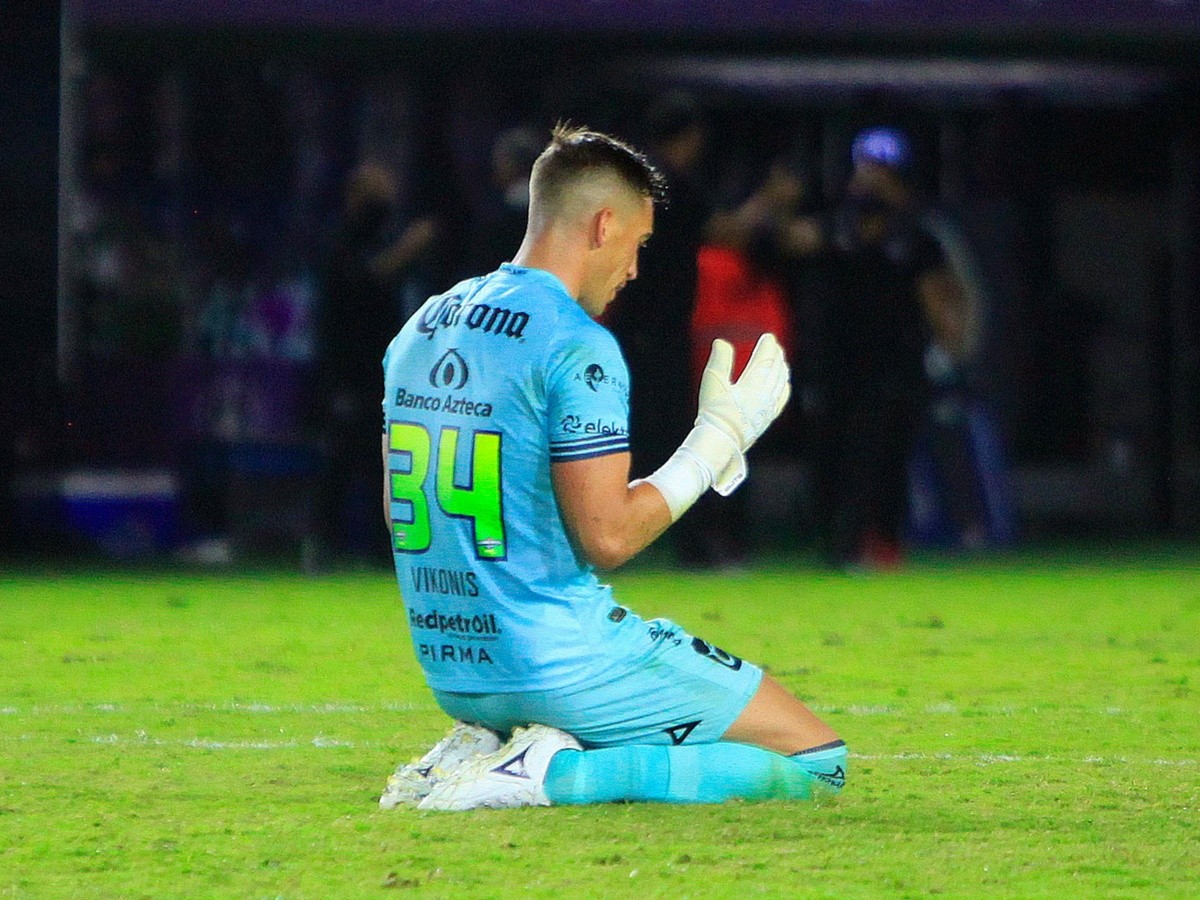 After suffering a painful and surprising defeat, Rubens Sambueza will have to draw on his experience to help his team forget the episode and focus on what they had done in the first three games, in which they had earned nine points. 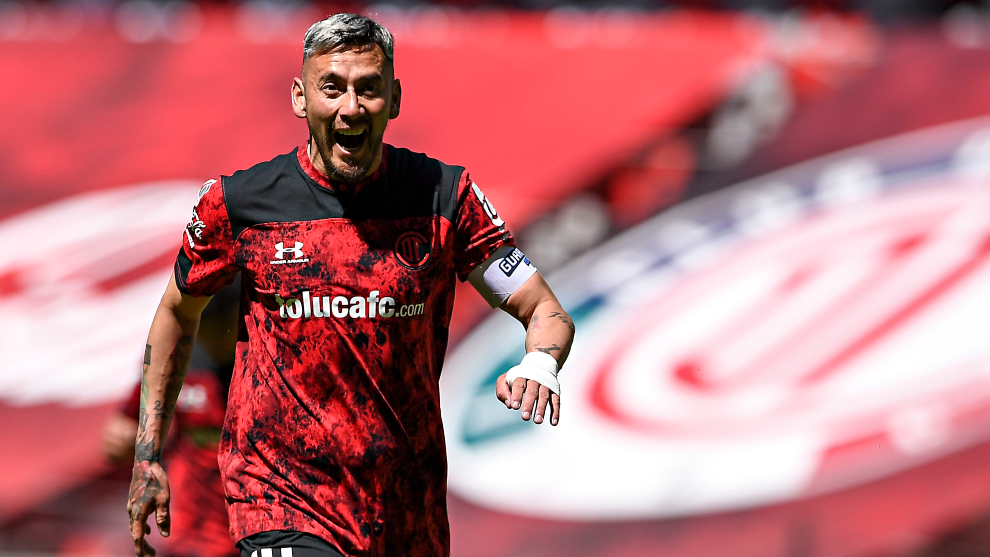 Mazatlán: Getting strong on the road

If there is one thing Mazatlán has suffered from in its short history, it is not being able to win on the road, having won only three times in its entire history. This season they already surprised by beating Cruz Azul 2-0, but they are coming off a 3-0 loss at León's home.
4:18 PMa month ago

Losing 2-0 before six minutes against champion Cruz Azul ended up taking its toll on the Diablos, who will have to improve in the lower area and, above all, Hernán Cristante will have the job of finding a replacement for Haret Ortega, who was sent off.
4:13 PMa month ago

Both teams have just lost their undefeated records in a grotesque manner after being beaten away, so this game will be a chance for both Toluca and Mazatlán to get their revenge.
4:08 PMa month ago

The Toluca vs Mazatlan match will be played at the Nemesio Diez Stadium, in Mexico State, Mexico. The kick-off is scheduled at 6 pm ET.
4:03 PMa month ago

Welcome to VAVEL.com’s LIVE coverage of the 2021 Liga MX: Toluca vs Mazatlan!