We hope you enjoyed the Santos Laguna vs Atlas matchday five of Liga MX. Stay tuned to the VAVEL website for updates throughout the day.
10:06 PMa month ago

Guerreros and Rojinegros tied to earn one more point in the Grita México Apertura 2021, but with this scoreline, they have now gone two games without three points.
Both teams tried to propose in the first half, but it was the visiting team that was first on the scoreboard.

In the second half, Guillermo Almada would move his pieces in the right way so that Santos could tie the game in the final part of the match.

Next match day, Atlas will host Toluca and Santos will visit the Nou Camp to face the Panzas Verdes of Leon.

Match ends at the Estadio Corona TSM! Santos and Atlas split points in the final match of the day.

Goal disallowed for offside for Santos
9:46 PMa month ago

Santos does not give up! Diego Valdés tries a shot from outside the area but he misses the ball and ends up wide of the goal
9:43 PMa month ago

LAST 10 MINUTES OF THE MATCH!

Santos and Atlas are tied so far, both teams are looking for the winning goal.
9:38 PMa month ago

In this way, the home team scored the equalizer from a corner kick.
9:32 PMa month ago

The match is stopped due to a player injured! Julián Quiñones is treated by the medical staff after suffering muscular discomfort.
9:26 PMa month ago

Squeeze Atlas! Atlas continues to dominate the match and through a shot by Quiñones they are making their presence felt in the defensive zone.
9:15 PMa month ago

Jeremy Márquez's weak shot from outside the area passed without troubling Carlos Acevedo.
9:13 PMa month ago

Santos is on top! The team from the lagoon went all out on the attack and missed the chance to equalize with a bad control by Valdés.
9:11 PMa month ago

The ball is back in play at Estadio Corona TSM, Santos will be looking for a draw or a comeback, Atlas to extend or keep the lead
8:51 PMa month ago

At the end of the first half, Santos is losing to Atlas by the minimum with a goal by Julián Quiñones.
8:50 PMa month ago

Santos tries but fails to score! The home team tries a cross into the box but no one makes contact.
8:43 PMa month ago

Atlas remains on top of the scoreboard and continues to try to increase the lead through overlaps on the left flank with Julián Quiñones.
8:36 PMa month ago

Julián Quiñones opened the scoring for the red-and-black team.

Atlas continued to attack with a shot by Julio Furch that went just wide of the post.
8:29 PMa month ago

GOOOOOOOOOOOOOL FOR THE RED AND BLACKS! Julián Quiñones gives Atlas the lead
8:23 PMa month ago

ATLAS WAS SAVED! Otero arrived on the left flank and got to the back line to take a shot that was well blocked by Camilo Vargas.
8:21 PMa month ago

There's a goalkeeper! Julián Quiñones went alone on a counterattack against the Santos goal, but Carlos Acevedo guessed right and kept the ball out of the net.
8:15 PMa month ago

Atlas keeps bombing! A dangerous cross from Luis Reyes is met by Julio Furch in the box, but his shot goes over the crossbar.
8:14 PMa month ago

The first 10 minutes of the match are over, so far Atlas is the one who has the possession of the ball and proposes more on offense.
8:08 PMa month ago

Atlas squeezes and squeezes! In a sea of rebounds inside the six-yard box, the ball falls to Luis "el hueso" reyes and he volleys the ball over the crossbar.
8:05 PMa month ago

THE ATLAS HAS ARRIVED! Julián Quiñones takes a shot inside the box but his shot goes over the crossbar.
8:04 PMa month ago

The referee blows his whistle and the action begins on the field at Estadio Corona TSM.
7:59 PMa month ago

In a few moments we will start the broadcast of the match: Atlas vs Santos for the 5th round of the Liga MX.
7:54 PMa month ago

The home team is already at the TSM field to fine-tune details, warm up and prepare for the start of midweek's action. It will be important to get the win!

Warming up the engines!

Camilo Vargas is already on the field of Estadio Corona TSM to perform the respective warm-up exercises to face the duel corresponding to Day 5.

In this way, Santos sends a message to its fans prior to the start of the game: The warriors are going for the victory!

Redblacks in the future!

These were the matches played in the Basic Forces of Atlas for these 3 youth players:

All 3, under 22 years of age, are consolidating themselves in the LigaBBVAMX. 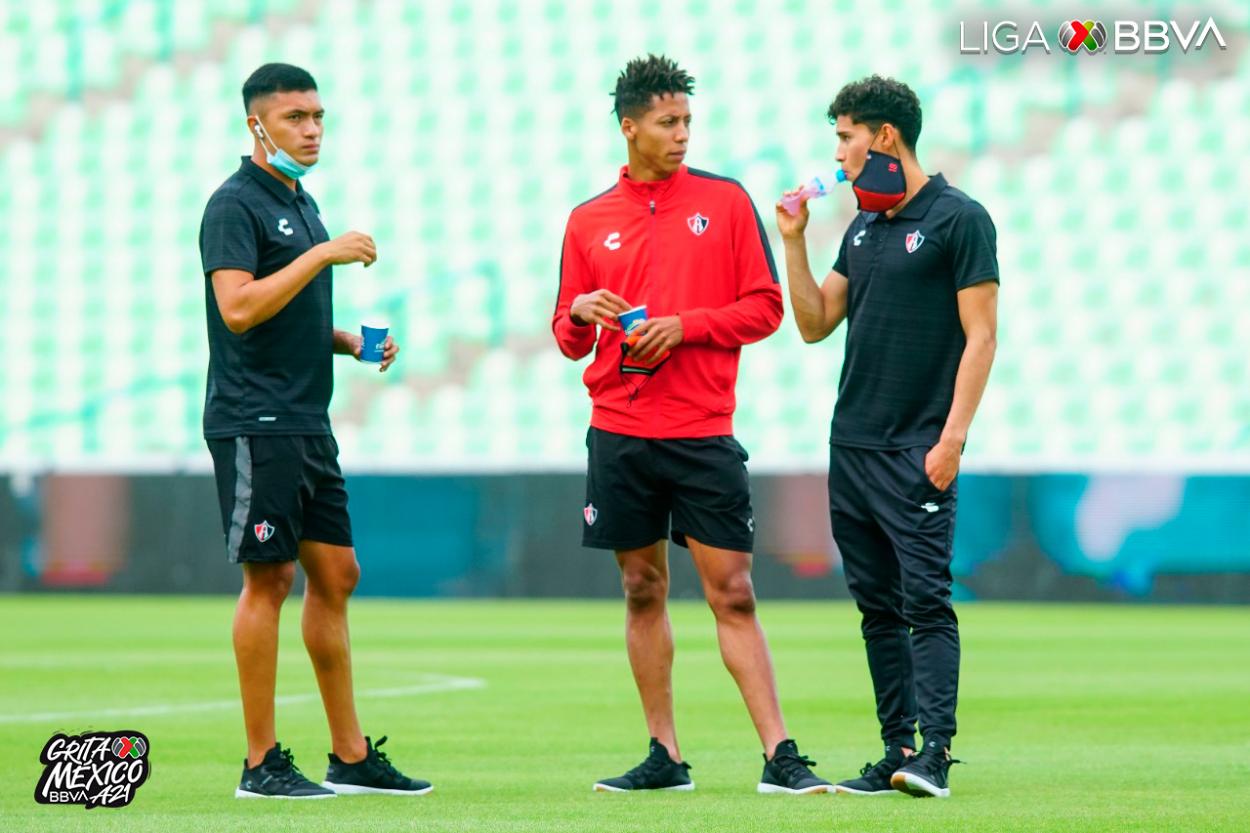 Up with the visit!

The academy is already at the stadium to face their duel against Santos Laguna, at the moment the locals are in tenth place in the general table, while Atlas is up in position 8. A victory would change the outlook for both teams!

With this starting lineup, the warriors from the Comarca Lagunera will take to the field to face one of the red-and-black Atlas players, who will be looking for three points at home.

This is what the TSM pitch looked like before kickoff - simply spectacular! 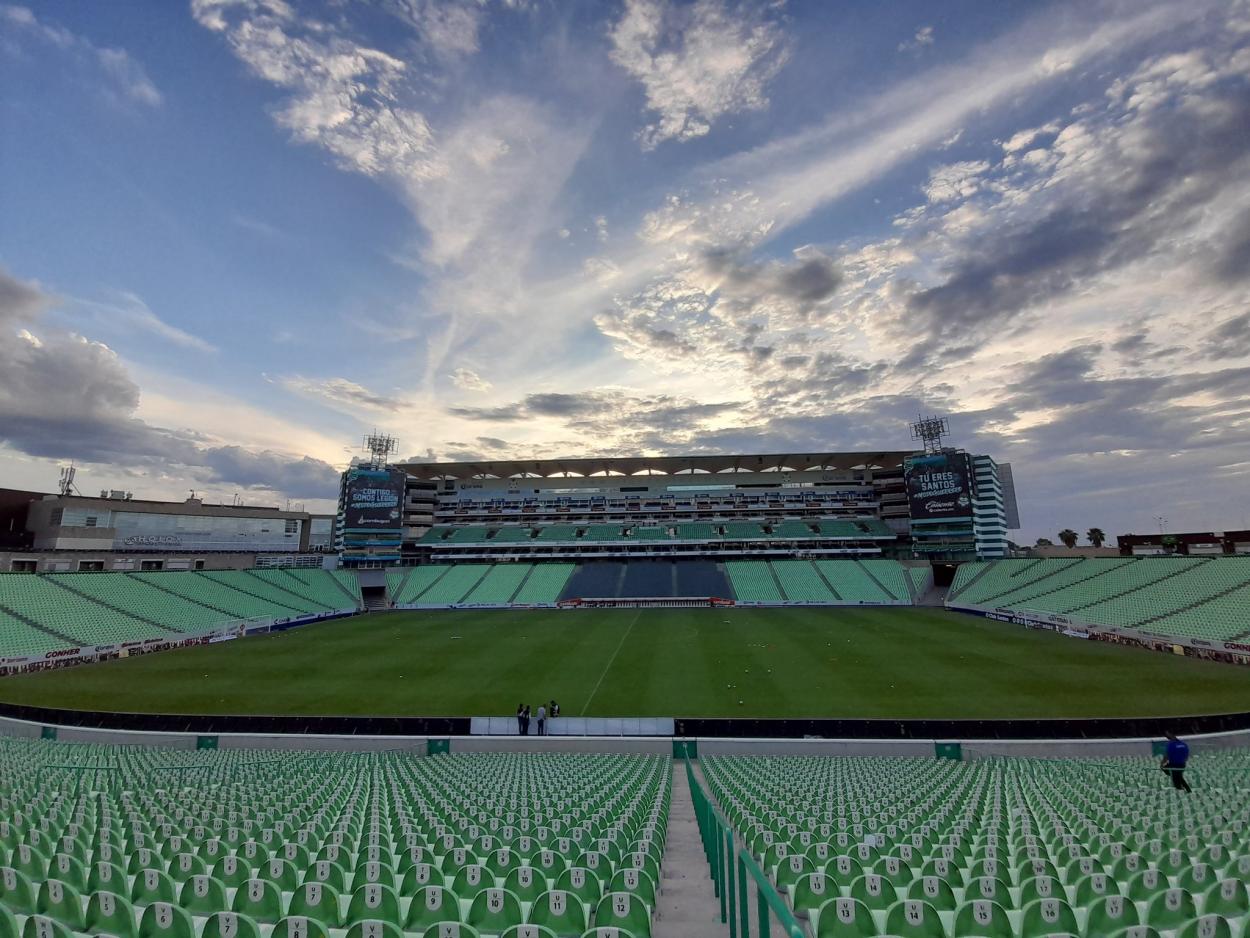 One of the most interesting duels we will have on the field will be that of Alan Cervantes vs. Jeremy Márquez, two elements that help to unburden the ball in the lower area of the field and future leaders of the midfield.

The team from the Comarca Lagunera has already arrived at the "guerrera" fortress: the TSM Corona Stadium, where they will once again be looking to give their fans some joy!

The Atlas Technical Director was interviewed before traveling to the lagoon territory and did not hesitate to express his feelings towards the red-and-black team.

"The first day I put on the Rojinegra, I never forget it again, I said: I'm from here, I don't want to leave. I feel a very special affection for Atlas": Diego Cocca

The house of the warriors is already ready to receive their men, with armor ready to put on the green and white colors, plus the atmosphere to raise the mood before the match, the locker rooms are waiting to be occupied.

Soccer day in the Comarca Lagunera, Santos receives the red-and-black Atlas in the continuation of Day 5 of the BBVAMX League. The Guerreros have met the Zorros 56 times in history and it is the locals who have the advantage in the history of the league, but will the data change today or will the Lagunera advantage be extended?

Do not miss a detail of the match with the live updates and commentaries of VAVEL. Follow along with us all the details, commentaries, analysis and lineups for this Santos vs Atlas match.
6:49 PMa month ago

What time is Santos vs Atlas match for international friendly?

Winifreda-born Argentinean, Julio César Furch, is one of the most dazzling players to have arrived in the Mexican league and one of the most decisive forwards in the red-and-black Atlas team. Furch arrived in Mexico in 2015 and since then he has played 29,305 minutes in which he has appeared 401 times in a starting eleven, scored 138 goals and participated in 42 assists, however, he is also one of the elements that have received the most yellow cards with 44 in Liga MX. In the current tournament he has already scored 2 goals in 3 games played and his performance has improved as the tournament has progressed, so he could be the player to break down Santos' defensive barriers and give the academy three points. 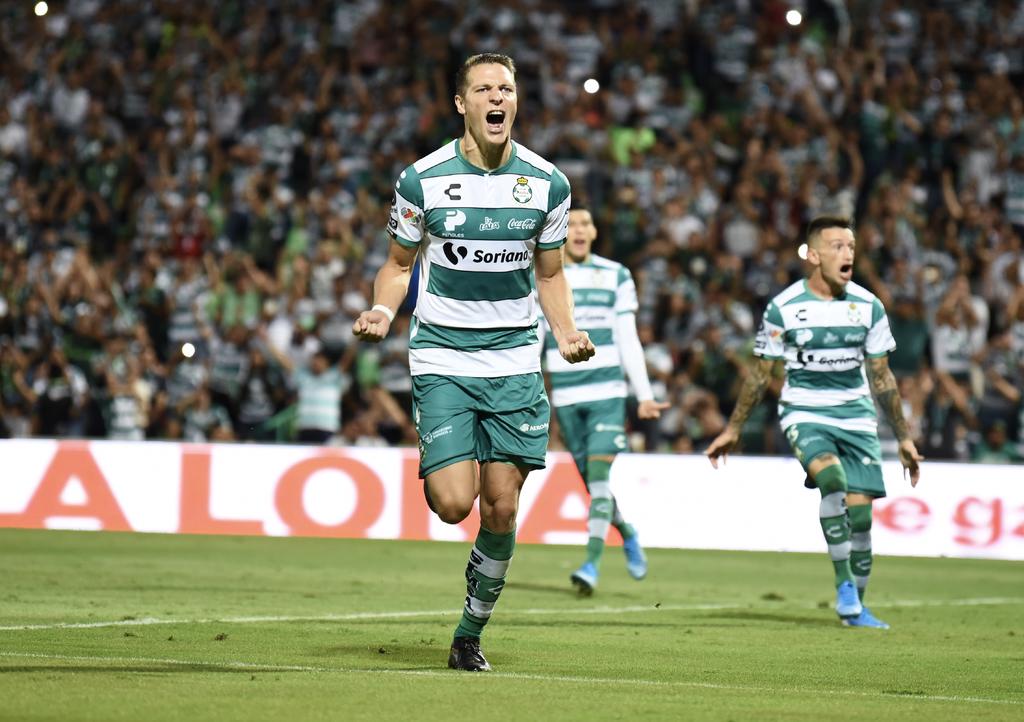 The Chilean Diego Valdés is one of the fundamental players in the Laguna squad's attacking aces, sometimes Guillermo Almada usually uses him as an attacking midfielder or right winger, but he always starts in the starting lineup. Since his arrival at Santos Laguna in the Clausura 2019, he has played 5,914 minutes of which he has appeared 86 times in the starting lineup, scored 19 goals in his personal account and participated with 12 assists, thus placing him as one of the most regular players in terms of performance within the club, proof of this is his value in the market that has been increasing since his stay with the guerreros, so Diego Valdés could be the factor player to give the lagunera shire a win this matchday. 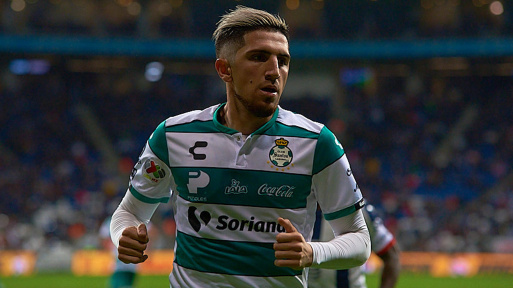 The Guerreros de la Comarca Lagunera and the Rojinegros del Atlas have met 33 times (11 wins for Santos, 13 draws and 9 wins for the Zorros) in the past, with the balance leaning towards the side of the Lagunero team. The last duel dates back to February 6 of this year, in the Guard1anes 2021 tournament, where both teams tied by the minimum score at the Jalisco Stadium. Likewise, these duels are usually accompanied by emotions, as since winter 96 there have only been 2 0-0 draws in the history of the match. 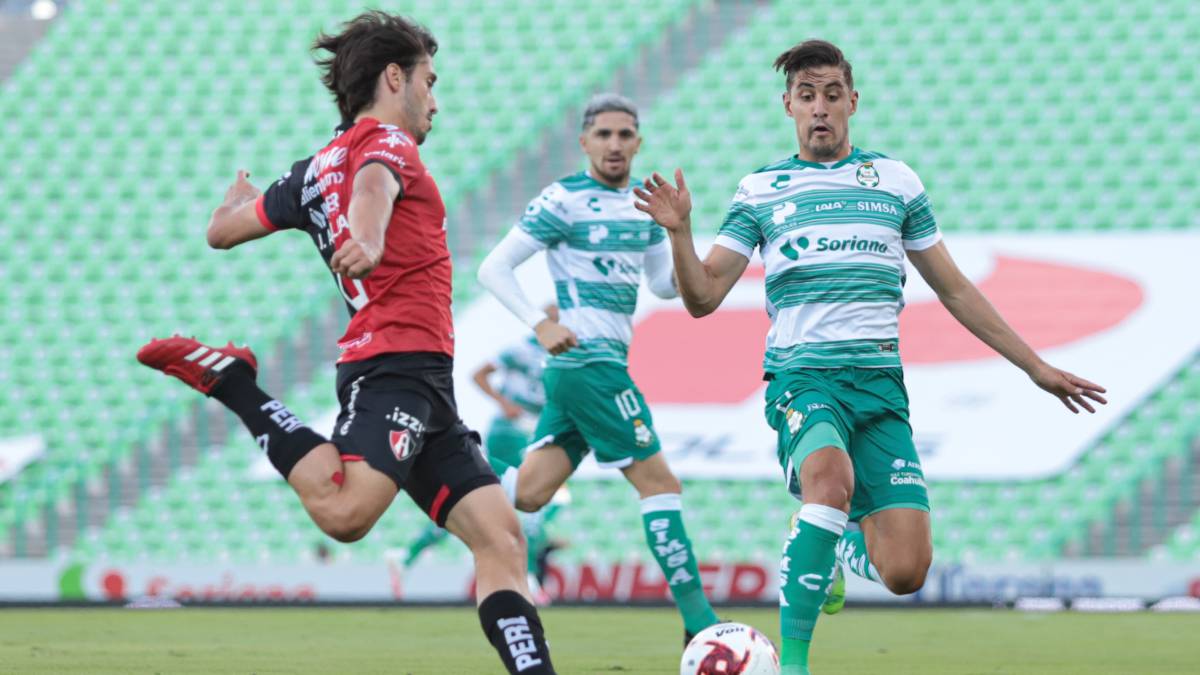 Fernando Guerrero will be the referee, Jose Brahim and Mauricio Nieto will be the assistant referees 1 and 2, and the fourth referee will be Oscar Mejia.
6:14 PMa month ago

The red-and-black Atlas had a bitter birthday celebration last matchday when they received América and dropped the three points at home and with their people by the minimum difference, despite having the advantage on the field with an extra man during the match, the team led by Diego Cocca did not know how to take advantage of the Azulcrema's discomfort and ended up paying a painful defeat. The Foxes are currently in the playoff zone with 2 wins, 1 draw and 1 loss, however, they have only conceded one goal so far, showing that Atlas has one of the most secure defenses in the championship.

Two draws in a row

The team coached by Guillermo Almada recorded its second draw in a row so far this season on Sunday when they received the rebaño sagrado at the TSM Corona stadium. With this result, the Lagunero team is in 9th place in the general table after 4 matchdays played, however, the current runner-up of Mexican soccer continues to leave much to be desired in their recent performances, which is why it will be of vital importance to win this midweek duel.

In need of a victory

A new matchday will start for the warriors of the Comarca Lagunera and the Rojinegros of Atlas, despite the fact that Santos is coming from a more positive than negative result with a draw at the TSM, they are lower in the general table than the Rojinegros, On the other hand, Atlas has been improving in its style of play and although it recently lost to América, the team led by Diego Cocca has shown a high level and rhythm of play in its four matches so far this tournament.
5:59 PMa month ago

The Santos vs Atlas match will be played at The TSM Corona Stadium, in Torreón, Mexico. The kick-off is scheduled at 20:00 pm ET.
5:54 PMa month ago

Welcome to VAVEL.com’s LIVE coverage of the 2021 Liga MX: Santos vs Atlas!