9:15 PM EST - Thank you for joining me today as we covered the Breeders Cup. Thanks again and take care.

9:10 PM EST - That wraps up another exciting (and a much more controversial) year of Breeders' Cup action. 2015 will have the event held at historic Keeneland Racecourse in Lexington, Kentucky.

9:06 PM EST - And Twitter is blowing up over that decision to not disqualify Bayern. Be careful out there if you have an opinion.

9:03 PM EST - Here are the payouts for the Breeders' Cup Classic: 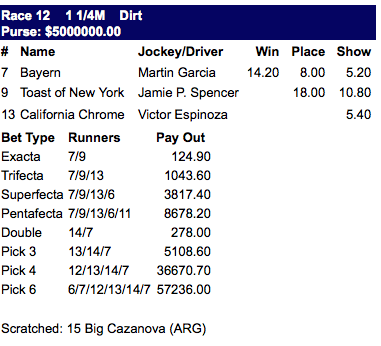 8:57 PM EST - Stewards are still taking a look at the incident. Interesting choice here for them...

8:54 PM EST - Hold all tickets!!! There is an inquiry in the Classic. Stewards are taking a look at the start.

8:38 PM EST - As expected, they are taking all the time they want to get the race underway. They are currently doing the post-parade, which means that they will probably not be going off until a quarter to 9 PM EST at the earliest.

8:28 PM EST - Post time is stated as 6 minutes away, but they will undoubtedly take their time getting to the gate.

8:25 PM EST - Even V.E. Day has a chance. He was 2 for 2 on dirt until his last race in the Jockey Club Gold Cup. He had an awful trip and finished 5th after disqualification to another horse.

8:22 PM EST- A wild card in this race is the Toast of New York, but he has not raced on traditional dirt so we do not know what we will get. Moreno will also have a say in the race, even if he does not hit the board with his speed.

8:20 PM EST - Then there is Bayern who has been scintillating at times this year, but also thrown in a few duds (The Travers and Preakness). There are certainly questions about whether or not he can get 10 furlongs, but he will play a factor in the race shap.

8:16 PM EST - Then there is the undefeated Shared Belief, who is 7 for 7 including a trying victory by a neck last time out. Shared Belief is owned in part by Jim Rome.

8:13 PM EST - For those that do not remember, Tonalist upset California Chrome in the Belmont earlier this year as Chrome went for the Triple Crown. Tonalist has raced three times since then with a first, second, and third place finish. Chrome has raced only once, a 6th place finish where he was beaten 7 1/4 lengths. 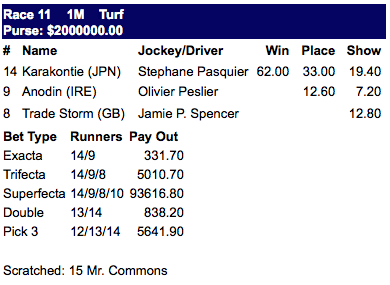 7:30 PM EST - Another great betting race is upon us with the Mile. The current favorite is #5 Toronado (IRE) has been great in Europe, however, the European form has not carried over to Santa Anita the past two days. That makes him a bit vulnerable at such a low price.

6:13 PM EST - #7 Flintshire (IRE) is the other standout based on class. He has faced the likes of Treve, Ruler of the World, and Cirrus Des Aigles. The #1 and #7 will be tough to beat in here.

6:10 PM EST - #1 Telescope (IRE) is one of the two class standouts in this race. His last race was a 3rd place finish to Australia and The Grey Gatsby - two of the top horses in Europe.

5:55 PM EST - Here are those payoffs for the Juvenile: 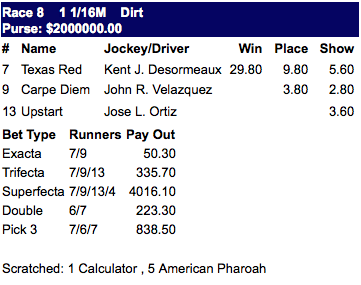 5:30 PM EST - This race is basically down to the two Todd Pletcher trained horses #9 Carpe Diem and #12 Daredevil. Both are 2-for-2. One could make an argument for #13 Upstart, who finished second last out to Daredevil in the Grade 1 Champagne, but everyone else seems to be a step below the top two.

5:22 PM EST - That win by Bobby's Kitten gives trainer Chad Brown his third Breeders' Cup win this year. He and Wesley Ward are having a great two days. 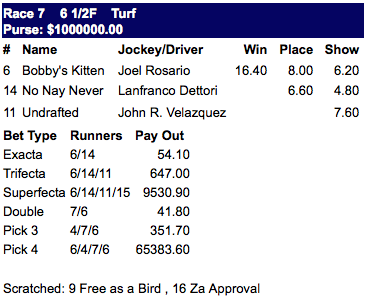 4:13 PM EST - It is hard to gauge how the track will play in this race. Speed has held, but if the track is drying out and unsealed, management is clearly trying to make it fairer. It will be interesting to see this race play out.

4:09 PM EST - #7 Judy The Beauty is the 5/2 favorite. She was second last year in this race after finishing a half length behind the sensation Groupie Doll.

3:40 PM EST - #2 Just The Judge (IRE) has been very good since arriving in the US. She finished third in the Beverly D and won the EP Taylor (both races are Grade 1). She has to worry about the horse to her outside, but she should give a good account of herself in this race.

3:33 PM EST - #3 Dank towers over this field in class, but the question is will she be ready after not racing since June 18?

3:16 PM EST - Pretty safe to say there is a speed bias on the main track at Santa Anita. No reason for the six to hang on there given her previous races. Oh well, on to the next race....

3:13 PM EST - Here are the massive payouts for the Juvenile Fillies:

2:30 PM EST - #12 Amaranth went straight to the lead and held off #4 Velvet Mesquite for the win in the third race.

2:15 PM EST - Post time is 10 minutes away and #4 Velvet Mesquite is the 2-1 favorite. #12 Amaranth is 3-1. Note that morning lines were based on this race being run on turf and they do not really apply with the surface change.

1:55 PM EST - Very similar to the race 1 in regards to how the race was run, #1 Acceptance was hustled up to the lead and held on to win. #2 Wake Up Nick was second and #6 Mischief Clem was 3rd. Those three were the top three betting choices as well.

1:37 PM EST - #1 Acceptance has only one race in his career, but it was an impressive 13 length victory back on October 5. #2 Wake Up Nick is 5 for 5 in his career with his last race occuring on September 15 by 2 3/4 lengths. Jockey Elvin Trujillo rode both the #1 and #2 in their last races, but has opted for the #1. Mario Gutierrez is back aboard the #2 after riding him in his first four races.

1:19 PM EST - #3 Ocho Ocho Ocho was comfortable throughout and pulled away for the win. #14 Peacenluvepeacenluve got up to be second with #9 Tizcano holdin on for third. #2 Metaboss was fourth.

1:15 PM EST - They are approaching the gate for the opener on Breeders' Cup Saturday.

1:06 PM EST - The track is currently listed as good and so is the turf course.

12:56 PM EST - #2 Metaboss is an intriguing horse. He has one career race, at 6.5 furlongs on the downhill turf course, and he ran a solid 3rd. He is bred for both turf and dirt and figures to improve in his second start. 8-1 is a square price on him.

12:47 PM EST - #8 War Alert is in an interesting spot here. He is clearly bred for turf (War Front, out of a Lemon Drop Kid mare), but his connections opt to keep him in this race on dirt (moved off the turf). At 5/2, he feels like an underlay.

12:40 PM EST - The 4/5 favorite in the first race is #3 Ocho Ocho Ocho. He broke his maiden in his first start at 5.5 furlongs on dirt. He is the clear, and a logical, selection in this upcoming opening race.

12:30 PM EST - The track will probably be fast by the time the races start and the turf is expected to be good today.

12:10 PM EST - Here are the lastest scratches. There is no surprise of the mass exodus out of the first and third races now that they are off the turf. 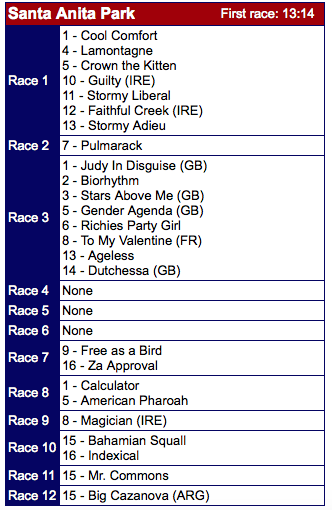 12:00 PM EST - And the water main has been shut off and the track was not affected.

11:55 AM EST - Courtesy of David Grening of DRF. The picture below shows a bit of leak near the Santa Anita main track: 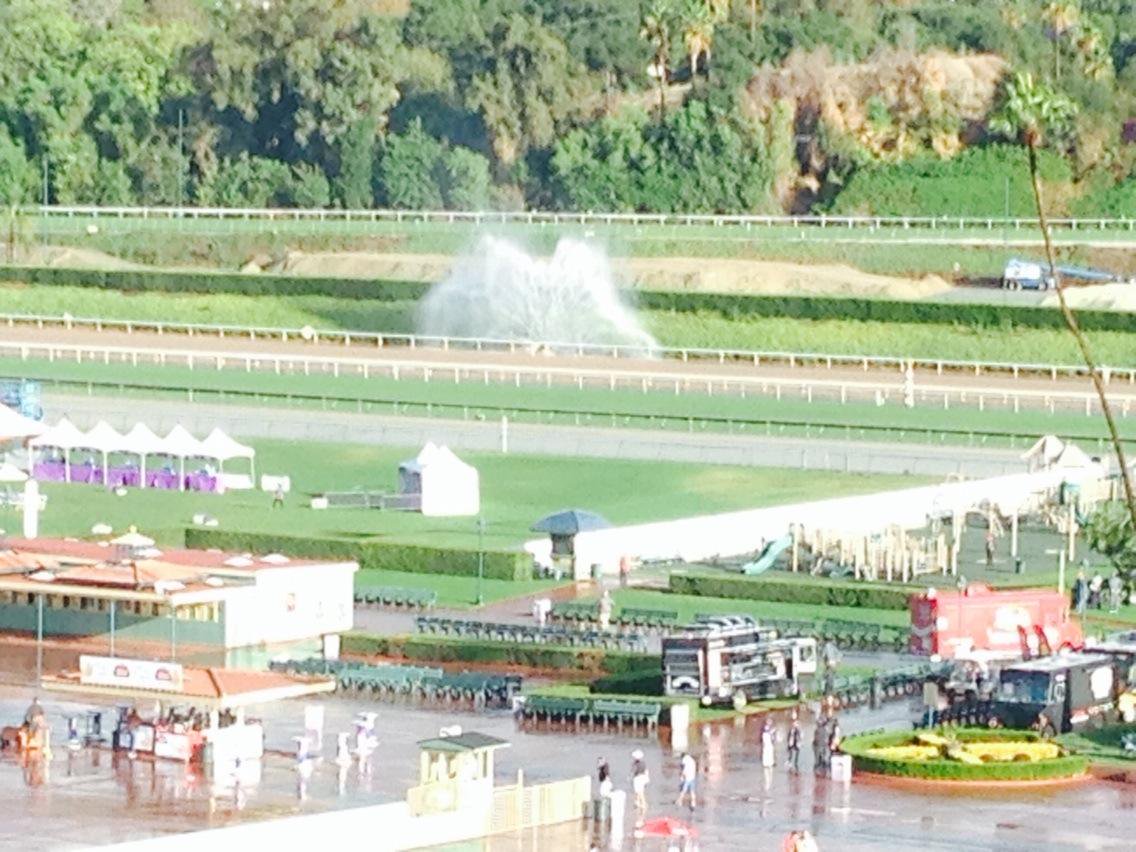 11:47 AM EST - Here is today's schedule with wagering options:

11:30 AM EST - Several people are reporting on social media that the main track at Santa Anita is sealed. In addition, the first and third races have been taken off the turf. No surprise there as the management wants to preserve the turf course for the Breeders' Cup races later in the day.

11:20 AM EST - The changes will be updated as new information becomes available.

11:15 AM EST - Here are all the scratches for Saturday's racing: 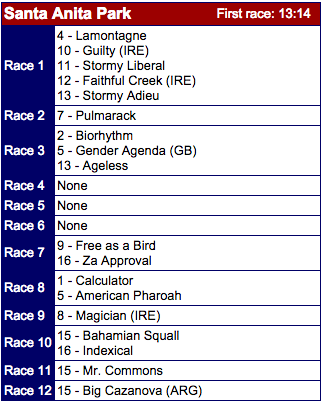 In race 8, #5 American Pharoah is scratched and that is big as he was the 2-1 favorite. #1 Calculator is also scratched.

Race 9 has a big scratch of #8 Magician (IRE). He was widely seen as a top contender to win the Breeders' Cup Turf.

In race 12, the Breeders' Cup Classic, #15 Big Cazanova is scratched.

10:58 AM EST - Untapable was ridden by Rosie Napravnik who announced after the race that she would be retiring. She has 4 mounts on Saturday and she is 7 weeks pregnant. There had been no inclination to the rest of the world of her intentions, which made the announcement a complete surprise.

10:54 AM EST - The final Breeders' Cup race on Friday was the Distaff for fillies and mares three years old and up at 1 1/8 miles on the dirt. It was yet another super performance from #10 Untapable who has been out of this world against Fillies in 2014. Against females, Untapable was undefeated in 2014 and the Distaff was her first race against horses older than 3 years old. She was clear from the #7 Don't Tell Sophia who came from last to grab second by a nose over #3 Iotapa. The prices are below for the Distaff.

10:44 AM EST - The third Breeders' Cup of Friday's card was the Juvenile Fillies Turf. It was at one mile on the turf course, just like the male counterpart of the Juvenile Turf. All the action was on #4 Lady Eli. She was 6-1 on the morning line, but was bet all the way down to 2-1. It turned out smart money because she won rather easily with a perfect trip. #3 Sunset Glow tried to take them gate-to-wire, but she was no match for Lady Eli and finished second. #2 Osaila (IRE) rallied to grab the third spot. Prices for the race are below.

10:36 AM EST - The second Breeders' Cup race, the Dirt Mile, saw another great performance out of #1 Goldencents. After setting a fast pace in the 2013 edition, Goldencents employed the same tactics on Friday by gunning to the lead and holding on. Goldencents had every reason to give up in the stretch, but he held off #9 Tapiture's rally to score by 1 1/4 lengths. He did so as the 3-5 favorite. #4 Pants On Fire finished 3rd. The payouts for the Dirt Mile are below.

10:29 AM EST - The first Breeders' Cup race was the Juvenile Turf at 1 mile on the turf course. Despite being the 3-1 morning line favorite, #5 Hootenanny came on late in the stretch to overtake a stubborn #3 Luck of the Kitten. Luck of the Kitten tried to make every yard of the race, but just could not hang on. A scramble for third place resulted in #2 Daddy D T getting up with #6 Conquest Typhoon finishing fourth. The payouts are below.

10:25 AM EST - Before we dive into the tremendous racing we have on deck Saturday, we will take a look back at what happened on Friday when four Breeders' Cup races were ran.

10:20 AM EST - The first post for Saturday's card is at 1:15 PM Eastern Time. There will be twelve races in total with the final 9 being Breeders' Cup races.