Yesterday the news broke that at a live event in Lowell, Mass, Samoa Joe defeated Finn Bálor for the NXT Championship. With this win Joe ended Finn’s record 292 day reign as champion which surpassed the reign of Neville by 20 days, becoming the longest reigning champion in NXT history. Now the question becomes what is next for the man from Bray, Co. Wicklow Ireland as he surely will hit the main roster.

Will Finn join up with his former friends

It is well documented that Finn Bálor has spent time in Japan and during his time in the Orient he became great friends with Karl Anderson & Luke Gallows and with their arrival in WWE could this be the beginning of Bulletproof/Bálor Club in WWE. The Bullet Club ran the scene in Japan for a very long time. Many feel that now is the time for one of the biggest factions in professional wrestling to make its debut on the biggest possible stage in WWE.

Reaction to the Loss

There is also the fact that WWE’s resident Mr Twitter Kevin Owens took to his favorite social media medium to tweet the following:

This adds more fuel to the fire that Balor is headed for the main roster and with some many different subplots in play as Bálor potentially is going to join the main roster it could make for some rather interesting storylines going forward.

Will Finn appear at WWE Payback?

What this writer finds very interesting is the way AJ Styles is now adamant that he has had nothing to do with the actions of Anderson and Gallows as of late ahead of his match. Can you imagine at WWE Payback if AJ is proven right and it has been Finn Bálor that has been behind it all and of course we see the WWE debut from one more of arguably the best class in NXT history.

Others Tweeted about his shocking loss to Samoa Joe: 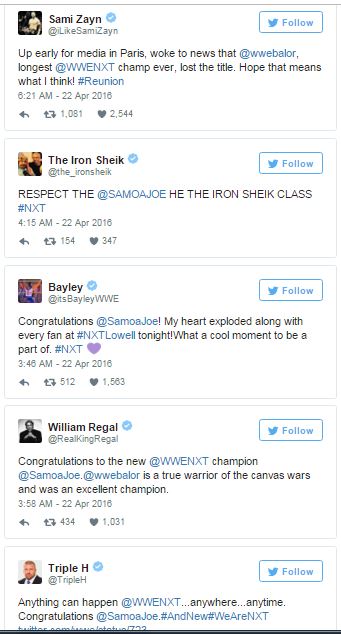