As the race draws nearer, more analysis and probability notes will be added to this 2017 Kentucky Derby Live. For now, though, notes about the race and the contenders are directly below.

The 2017 Kentucky Derby is certain to draw another massive crowd, similar to last year. However, the forecast doesn't look great with 65% probability of rain.

Always Dreaming (#5): Owned by business partners from Brooklyn who also owns the NHL’s Florida Panthers. He will be the post time favorite.

Irish War Cry (#17): Jockey, Rajiv Maragh, plans to make a huge comeback since suffering major injuries in past years including a fall that resulted in him being out for 15 months. Although Irish War Cry is a favorite, it is known that a horse with post number 17 has never won the derby.

Patch (#20): The 3-year-old colt got his name from having just one eye. He is owned by Calumet Farm. Todd Pletcher, who's won four consecutive Eclipse Awards as outstanding Trainer of the Year, trains him.

Irap (#9): His jockey, trainer, and owner have already won the Kentucky Derby twice with Nyquist and I'll have another. In April, Irap won his first race in the Bluegrass Stakes at Keeneland.

Thunder Snow (#2): Owned by world-renowned Godolphin Stables. His campaign for the 3-year-old season was spring-boarded by a win in the UAE Derby in Dubai.

Odds: Now is the time to make a brief summary to highlight who are the top contenders for this year's race and the $1,425,000 winner purse. As a heads-up, Always Dreaming and Irish War Cry are both co-favorites to win the Derby.

Owned by Reddam Racing, Nyquist won the 2016 Kentucky Derby mounted by Mexican jockey Mario Gutierrez beating Exaggerator, who was 1 1/4 lengths behind, for the first place finish. 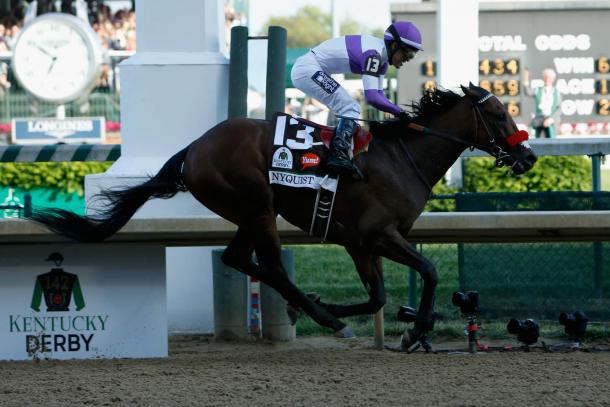 Before we go into details about today's race, why don't we backtrack to see who was the winner of last year's Kentucky Derby?

Guaranteed purse: The 2017 Kentucky Derby will be the 143rd running, and is set with a $2 million dollars prize money.

Let's remember that this race is a Grade I stakes race for three-year-old Thoroughbreds at a distance of one and a quarter miles (2 km). Colts and geldings carry 126 pounds and fillies 121 pounds.

The post time for this 2017 Kentucky Derby is at 18:34 ET, but above we will provide you with analysis, predictions, and more as the race draws near. To ensure you don't miss live coverage of the race, be sure to return here at post time!

Hello, everyone! Welcome to VAVEL USA's live coverage of the 2017 Kentucky Derby live coverage from Churchill Downs! My name is Alan Nunez and I will be your host for the most renowned annual horse race there is, right here on VAVEL USA.