On the road as 8-point favorites, the Houston Roughnecks were expected to put on a show. At home for the first time and seeking their first win, Tampa Bay wanted to show the Viper faithful that their season hadn't been lost.

Questions had been brewing through the first two weeks about how well Trestman's offense could perform. Tampa Bay got on the board early with a field goal, and Taylor Cornelius kept the ball moving in the first quarter. Like last week in Seattle, Tampa Bay had life in the first moments of the game.

All it took was one broken coverage for Houston to break the game open. PJ Walker dropped back at his own 16, stepped up, got pinched by two Viper lineman, but still had enough mustard on the ball to find who else but Cam Phillips, wide open at the 40. Phillips streaked down the sideline to score the 84-yard touchdown, quickly throwing the Roughneck offense back into gear. Walker, who had 306 yards on the day, found Sam Mobley on a three-point play, and the Vipers found themselves down once again.

The defenses held the game stale until Quinton Flowers sparked Tampa Bay. After finding Jalen Tolliver on a 23-yard sideline grab, Flowers scrambled past the midfield logo and threw a prayer off his back foot between three Roughneck defenders, but found the slim amount of daylight necessary for De'Veon Smith to snag it before being drilled by Cody Brown. Riding the Flower power, the Vipers found an endzone on his 7-yard scramble to score the first offensive touchdown for the Vipers this season.

As is custom for the Roughnecks, they found a way to answer and quickly, this time in the form of James Butler. Huge gains of 30 and 15 yards juking defenders every which way set the Roughnecks up at Tampa's 7-yard line. On 3rd & Goal, Walker fumbled the snap and saw the ball careen to the Viper 16. But what else would happen for Walker, as the entire right side of the field was open, and Walker strode into the endzone for Houston. Walker found the magic again. Houston added on a field goal to go up 18-10. 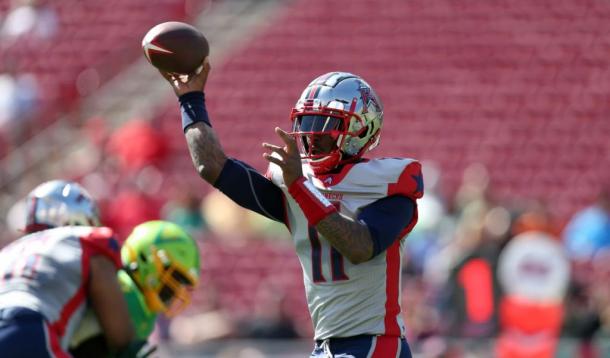 Tampa took over with 47 seconds left in the half, and Taylor Cornelius led a spirited effort to knot the game. Huge throw after huge throw, the Vipers found themselves stuffed at the Roughneck goal line with 3-seconds left. A Quarterback keeper by Cornelius put the Vipers in the endzone with no time remaining, and they knotted the game at 18 apiece.

Benefitting from a 36-yard penalty to put the Roughnecks deep in Viper territory, Walker found Cam Phillips again for a big play, this time allowing Phillips to spin and swirl his way into the endzone for a 24-yard score. Butler converted the two-point play to put Houston up 8.

Late in the 3rd, Cornelius found Dan Williams for a 21-yard score to put the Vipers within striking distance, and on their ensuing possession, they capitalized on that chance, knocking a field goal through to put them up 27-26.

However, if we have learned anything this season, it is that with PJ Walker under center, your chances are never low. Walker looked for Phillips again on a deep route but found pass-interference to work in his favor and set the Roughnecks up to score once again. Walker found the Phillips connection to finish the job they started, and the Roughnecks took the lead for good early in the 4th quarter.

Tampa Bay had their chance at the end. Literally knocking on the goal line with a little over 5 minutes to play, the Roughneck defense stepped up when they needed to and held the Vipers out of the endzone, and picked off Cornelius on the Vipers last-ditch effort. Houston eeked away with a victory on a road test in Tampa.

If it ain't broke, don't fix it. PJ Walker and Cam Phillips have been a nearly unstoppable tandem this season. Phillips leads the league in touchdown receptions, and teams have found no way to stop the twosome dominating the league on offense so far. If the well never runs dry, why go anywhere else? This could come back to haunt the Roughnecks if either Phillips or Walker struggles, but until that situation arises, I wouldn't expect Houston to try and do anything differently on offense. With Butler as their running back churning 72-yards on 7 carries and remaining a legit threat out of the backfield, the offense opens up much more for Houston.

Houston benefitted mightily from interference calls. Two huge drives were lengthened and catapulted by pass interference calls by the Vipers. Without those two huge penalties netting almost 70-yards combined, it could be said that Tampa Bay might be writing the narrative for this one.

Tampa Bay finally scored! Marc Trestman's team showed life! Hooray! And they nearly found it again with two chances at the end to punch the ball in. Cornelius (193 yards, 1 Passing Touchdown, 1 Rushing Touchdown) showed that the Viper system can have success, and playing at home certainly helped Tampa Bay to stay in it. Quinton Flowers provided the right amount of jolt to a sputtering offense that needed answers more than any team in the league.

Houston is securely the team to beat. Now that they are the only remaining undefeated team in the league with DC's blowout loss to Los Angeles, Houston is the team to beat in the XFL. The defense makes enough plays to supplement the production of the offense, and with the MVP Candidate under center, there are no signs of cracking for the XFL's #1 squad.

Houston (3-0) will travel to Dallas (2-1) in a big-time Texas Showdown on Sunday afternoon, while Tampa Bay (0-3) will host DC (2-1) in another opportunity to upset the balance of power in the XFL.

Check back on VAVEL.com for more XFL Coverage.