Thank you for following with us the fight of the year with a unanimous decision by Teófimo López, who is the undisputed lightweight champion and takes home four titles
12:47 AM2 years ago

This was the round where the blows were distributed, but Lopez was desperate in search of the knockout and allowed some blows, mostly straight, of consideration.

With 12 seconds left, Lopez began to bleed from his eyebrow on a strong impact. They will go to the cards to decree the winner.

Lomachenko has taken the lead in the fight and has generated damage. Lopez already looks tired and with little mobility. A knockout may be present in the last episode
12:35 AM2 years ago

The minutes pass and Lomachenko has more speed, thrust and precision in his strokes. However, Lopez has tried to answer, but remains erratic when it comes to hurting.

Lopez has lost the distance and will have to change his strategy. Lomachenko connected with the left-right combination, he has become more and more loose and seems to have tied the cards. A pretty even fight
12:26 AM2 years ago

Accidental head-on collision and the judge stopped the fight for a few seconds. Straight that also entered of Lomachenko and it will be necessary to have attention with the cheekbone of Lopez that has begun to be inflamed
12:22 AM2 years ago

Lopez has begun in desperation and called for an illegal coup. Lomachenko started to let go and has thrown more punches, although none of them are considered to be of any consequence so far.
12:18 AM2 years ago

Lomachenko has loosened up a bit more, but still prioritizes his movements to dodge blows instead of attacking. It will be key that Lopez does not begin to fall into despair
12:14 AM2 years ago

The blows begin to arrive, where Lopez took out a couple of hooks and a solid right that hit Lomachenko's face, who managed to connect a right hand straight to generate damage
12:10 AM2 years ago

With a lot of mobility, but with few hits from Lomachenko, who is still quite reserved compared to other fights.

Lopez's insistence has gone down a bit and careful, because he is a fighter who is not used to win in 12 rounds

Lomachenko is still very cautious. Lopez is leading the game, but what is a fact is that the distribution of blows tonight has been minimal, so far
12:02 AM2 years ago

Lomachenko invites López to start with the blows. In the end a left hand by Lopez generates damage and with this he will have a very tight round
12:00 AM2 years ago

Lomachenko pointed out that his only goal was to end up this way... with the belt 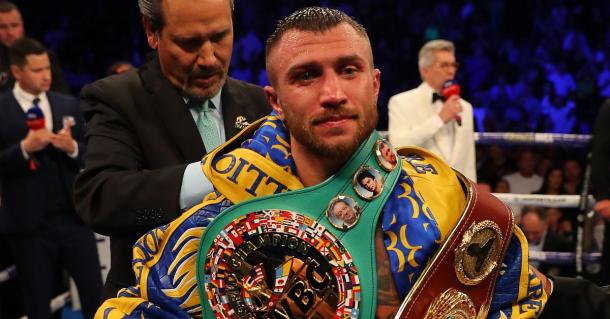 A complete round of study. Lopez has had initiative releasing more blows, but Lomachenko does not despair and has reacted very calmly
11:54 PM2 years ago

At this point the judge introduces both fighters. To nothing that starts the fight
11:50 PM2 years ago

Discreetly and calmly, the Ukrainian enters the ring
11:48 PM2 years ago

At this moment Teófimo López makes his appearance in the ring
11:44 PM2 years ago 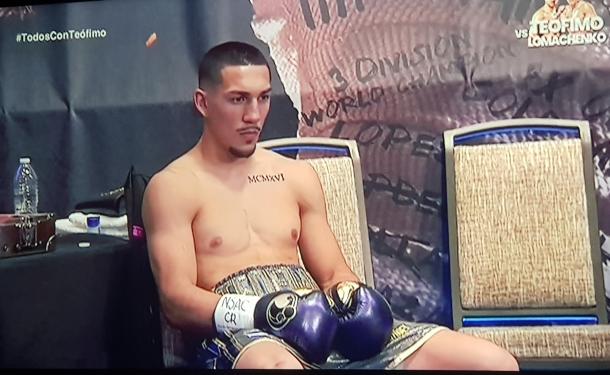 The fight that everyone was waiting for is at stake. Lomachenko vs Lopez is coming
11:34 PM2 years ago

By unanimous decision the victory was taken by the American Arnold Barboza
11:31 PM2 years ago

The fight between Mexican Saucedo and American Barbosa is over after 10 rounds. Everything will be defined in the cards
11:21 PM2 years ago

Lomachenko is extremely relaxed for this battle, can he succeed? 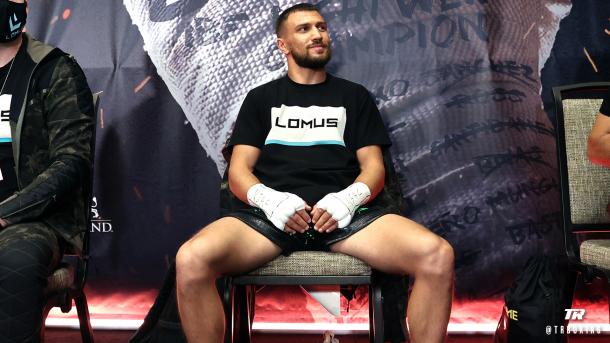 Curiously, Lomachenko's only defeat was in his second career as a professional when he fell to Mexican Orlando Salido
11:09 PM2 years ago

Saucedo and Barboza are already in the fifth round, where the Mexican (Alex) has thrown fewer hits, but they have been more effective
11:02 PM2 years ago

Alex Saucedo and Arnold Barboza will face each other in these moments
10:48 PM2 years ago 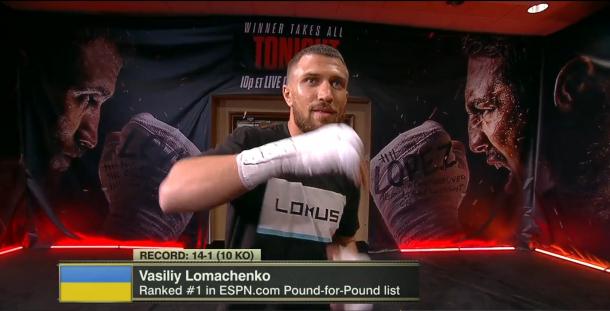 The winner will be...

Place your bets, who will take the fight tonight, Lomachenko or Lopez? 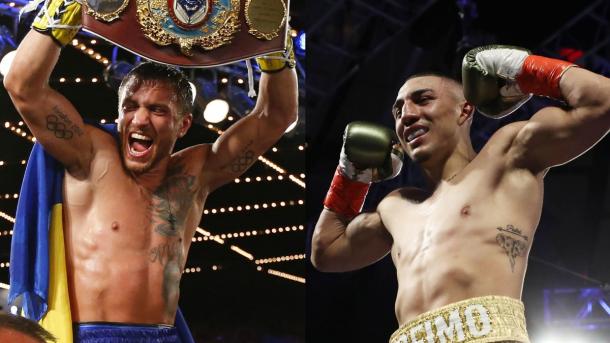 The four belts that will be at stake in this fight are currently on display in the ring
10:36 PM2 years ago

We are close to the start of the stellar fight between Lomachenko and Lopez. Don't miss the details
10:23 PM2 years ago

Edgar Berlanga gave a lecture on his power and only one round was enough to beat Lanell Bellows
10:18 PM2 years ago

Today four belts are in dispute to proclaim themselves the best lightweight in the world. Here is one of them, a wonder... 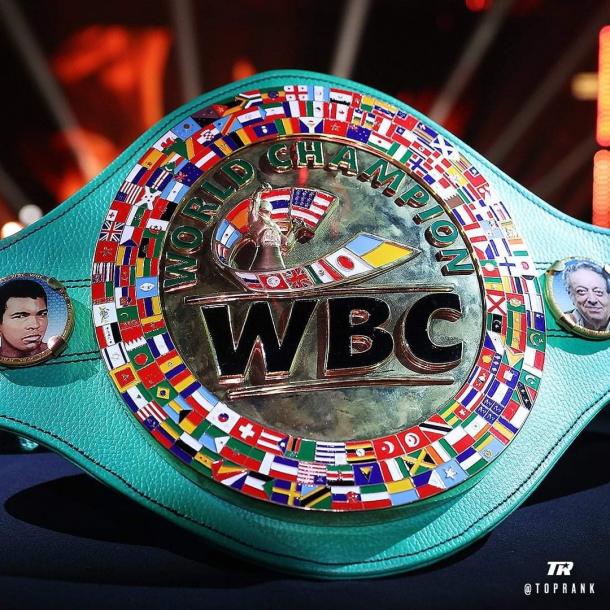 The smile of victory 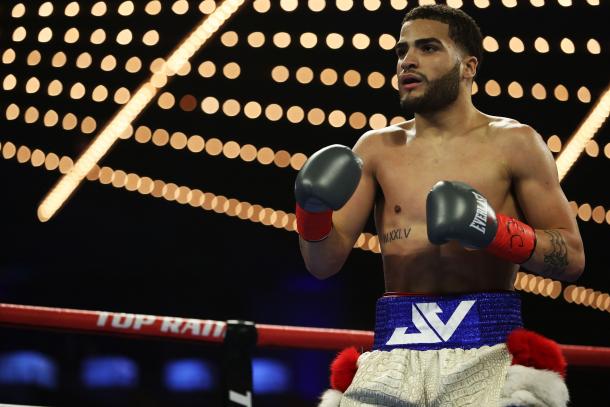 In the fight that just ended, Josué Vargas obtained a solid victory over Kendo Castañeda by unanimous decision
10:03 PM2 years ago

This is how it arrived

López, in good company, arrived at the MGM Gran Center in Las Vegas to try to retain his undefeated record, as no one has come close to beating him

This is how it arrived

Lomachenko is the favorite to take the fight, noting that he has won the last five against these rivals 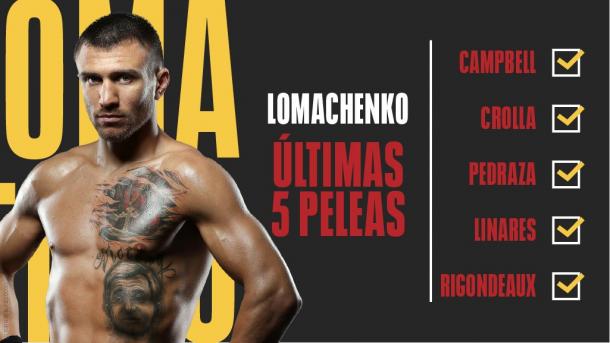 The fight of the year. We begin with coverage of the unification of the titles between Ukrainian Lomachenko and American Lopez. Follow all the details through VAVEL
4:24 PM2 years ago

Do not miss a detail of the match with the live updates and commentaries of VAVEL. Follow along with us all the details, commentaries and analysis for this Vasyl Lomachenko vs Teófimo López fight.
4:19 PM2 years ago

It should be noted that this will be the first fight between the two fighters, although the coronavirus pandemic delayed the date of the fight.
4:14 PM2 years ago

It will be broadcast on television is: ESPN

The temperature was at its highest during the weighing on Friday, where both fighters stopped beating around the bush and faced each other. Both had no problem giving the 135-pound weight.
4:04 PM2 years ago

Lomachenko is a favorite

According to the bookmakers in Las Vegas, the European fighter is a broad 3 to 1 favorite; while the tie would be around $200 if only 10 were bet.
3:59 PM2 years ago

This will be the complete billboard before the stellar performance between Lomachenko and Lopez:

For his part, the Honduran-born American (who participated in the Rio 2016 Olympic Games) beat Richard Commey in the second round last December. He registered a perfect mark of 15-0-0, with 12 knockouts. 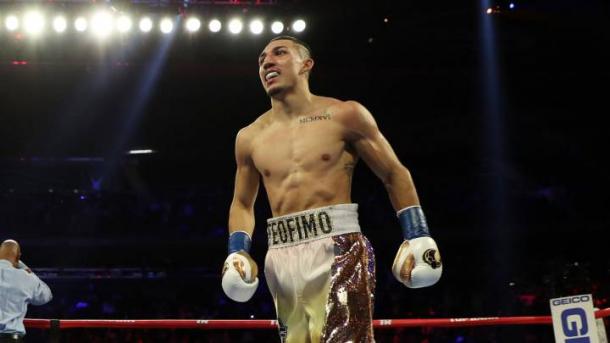 To reaffirm his titles

The Ukrainian boxer has not fought since August 2019 when he defeated Luke Campbell by unanimous decision. His record is 14-1-0, including 10 victories by way of chloroform. 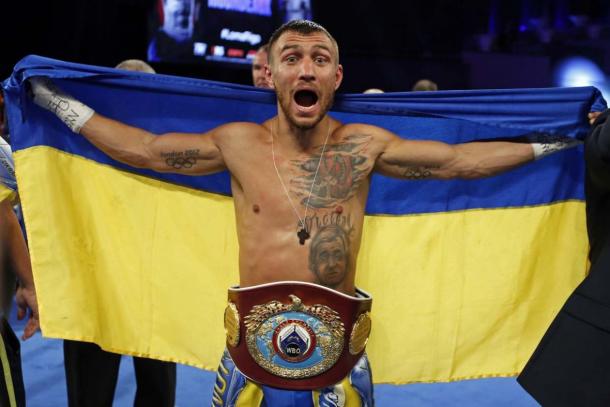 The stakes are high

This will be one of the most anticipated fights of the year, as the four lightweight world titles (WBC, WBO, WBA and IFF) will be contested
3:39 PM2 years ago

The Lomachenko vs López fight will take place at the Las Vegas. The start is scheduled at 10 pm ET.
3:34 PM2 years ago

Welcome to VAVEL.com’s LIVE coverage of the fight Lomachenko vs López!