Thank you for following the broadcast of the fight between Figueiredo vs. For more details on this and other sports don't forget to visit VAVEL.COM
2:11 AM2 years ago

Only 1:57 was contested and that was enough for Figueiredo's victory
2:10 AM2 years ago

This is how the fight ended

By way of submission with the guillotine, Figueiredo held Perez back even though the Mexican had started better. The Brazilian retains the UFC flyweight title
1:59 AM2 years ago

Alex Perez and Figueiredo enter the octagon for the expected all-day fight
1:56 AM2 years ago

To endorse the title

Mexican-American Perez will try to snatch the flyweight title from Brazilian Figueiredo
1:50 AM2 years ago

Now comes the stellar fight between Figueiredo vs.
1:48 AM2 years ago

A sample of the power of the champion

By unanimous decision, Valentina Shevchenko retains the title with a score of the four judges of 49-46 and thus retains the female flyweight world title
1:42 AM2 years ago

Maia went out in search of the knockout or throw to the champion, but Shevchenko was cautious and released several shots of effectiveness. They will go to the cards, but Shevchenko will retain the title
1:36 AM2 years ago

The first minutes were boxing, where Maia had better punches, however, once again the champion whipped her and put her face up

Once again Shevchenko knocked Maia down, but the Brazilian could get up after a few seconds. Later, Maia put the Ukrainian woman behind bars, who had a hard time getting out of that position.
1:23 AM2 years ago

Once again Shevchenko knocked Maia down, but the Brazilian could get up after a few seconds. Later, Maia put the Ukrainian woman behind bars, who had a hard time getting out of that position.

On the final stretch, it was Maia who got on top of Shevchenko to take this episode

All the time they spent on the floor, from the first minute, where Maia was down but did not let Shevchenko could cause severe damage
1:05 AM2 years ago

Shevchenko and Maia already enter the octagon for one of the most interesting fights of the night
12:53 AM2 years ago

The fight between Shevchenko and Maia is coming
12:47 AM2 years ago

At times they dealt blows, although Means' left-handed shot was very powerful and hurt Perry, who also answered, although he could not knock down his opponent again.

In the end, they dealt blows and sought victory, but the buzzer sounded. Everything will be decided on the cards

Perry was more purposeful and connected on an occasion that hurt Means and made him bleed from his face. Means continues to keep his distance and in the third period everything will be defined
12:32 AM2 years ago

Means looks much more comfortable and fast, where he released a couple of hits that were effective against Perry who still can't find the formula to generate damage
12:22 AM2 years ago

Both Perry and Means declare themselves ready and now make their appearance on the stave
12:17 AM2 years ago

Mike Perry vs Tim Means, the third stellar fight is coming
12:11 AM2 years ago

Chookogian won by a unanimous decision of 30-27, as ruled by the three judges
12:07 AM2 years ago

Calvillo had the upper hand in the game, but rarely hurt Chookagian, who defended well and hit back accurately. They will go to the cards to define the winner
12:01 AM2 years ago

Calvillo has taken his distance, but he has not been able to bring down Chookagian even though he has tried several times. Very even the second round where there was no clear dominance
11:56 PM2 years ago

The domains took turns. Calvillo held on, although on one occasion he knocked Cookagian down, although with good defense he prevented the blow from going any further. So far, Calvillo's lower height has not been a major factor
11:46 PM2 years ago

Calvillo and Chookagian enter now for the fourth last fight of the UFC's big billboard
11:45 PM2 years ago

Female flyweight duels are coming to the scene

Craig with the mastery of the fight that tries to make the key, but Shogun, with his experience, has managed to avoid it and has been rising from the ground several times
11:28 PM2 years ago

Craig with the mastery of the fight that tries to make the key, but Shogun, with his experience, has managed to avoid it and has been rising from the ground several times
11:20 PM2 years ago

Rua, the Brazilian fighter with only 19 years old, is ready for his fight
11:18 PM2 years ago

There are five fights inside the main card that will make all the UFC fans vibrate below
11:00 PM2 years ago

Pérez's last fight took place on June 6, 2020 after beating Jussier Formiga in the first round
10:54 PM2 years ago

There will be five star fights to close the big billboard, starting with the clash between Mauricio Rua and Paul Craig
10:48 PM2 years ago

Brandon Moreno beat Brandon Royval at the end of the first episode to win
10:38 PM2 years ago

We review what were the first three fights of this billboard: Alan Jouban and Kyle Daukaus won by unanimous decision over Jared Gooden and Dustin Stoltzfus; while Sasha Palatnikov beat Louis Cosce by TKO in the third round
10:34 PM2 years ago

Figueiredo's last fight was against American Joseph Benavidez, whom he beat in the first round to win the UFC Flyweight World Championship
10:30 PM2 years ago

Brandon Moreno and Brandol Royval will complete the UFC 255 preliminary card below
10:24 PM2 years ago

Beginning the second round, Bucley settled the fight he already had in his favor and beat Jordan Wright
10:20 PM2 years ago

First victory against a non-Brazilian

Figueiredo's first victory against a non-Brazilian rival came against Mexico's Marco Beltrán on June 3, 2017, which was his 12th victory
10:15 PM2 years ago

Joaquin Mansa and Jordan Wright in the middleweight will enter in action to continue with the great billboard
10:11 PM2 years ago

After a close battle, Lokomotivo imposed itself by unanimous decision on Daniel Rodriguez. Here his celebration: 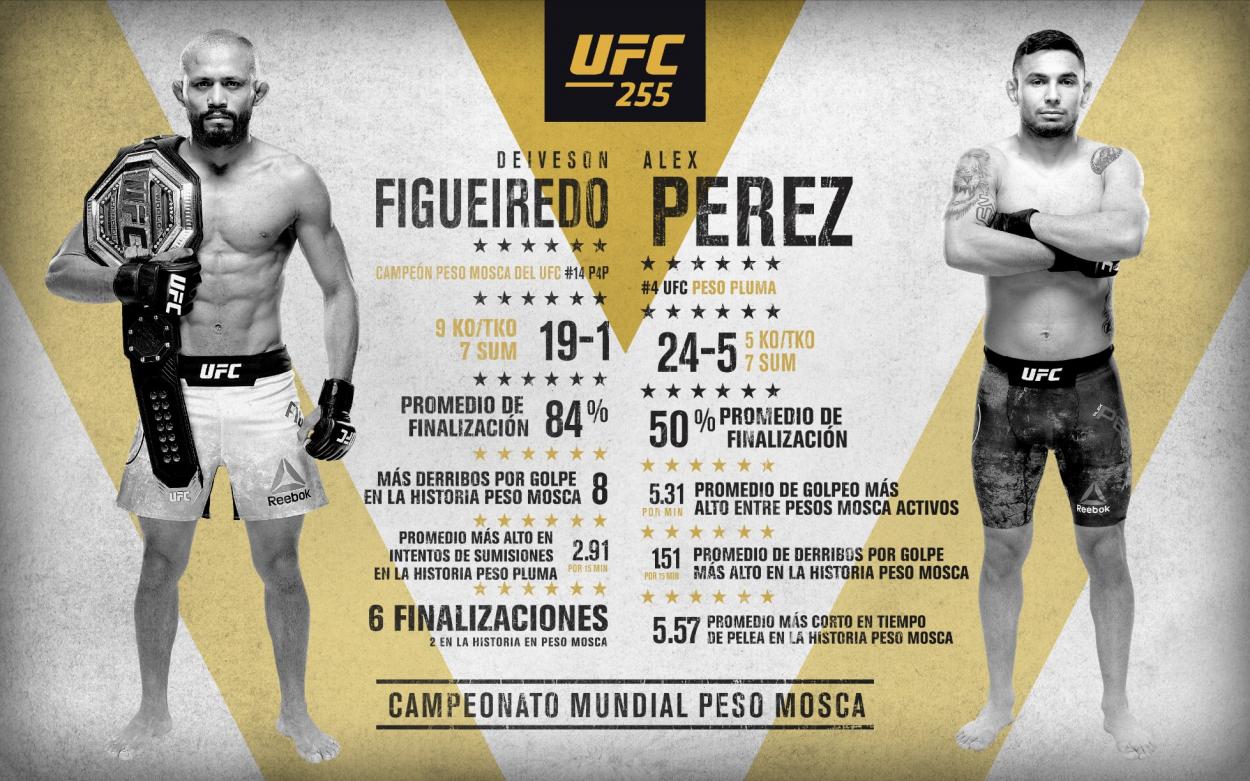 In the fight that just ended, Antonina Shevchenko beat Ariane Lipski and got her third victory by knockout
10:02 PM2 years ago

A great UFC billboard for tonight that will close with the fight between Figueiredo vs Perez and we have the best coverage only here
7:49 PM2 years ago

Do not miss a detail of the match with the live updates and commentaries of VAVEL. Follow along with us all the details, commentaries and analysis for this Deiveson Figueiredo y Alex Pérez fight.
7:44 PM2 years ago

It will be broadcast on television is: ESPN+

Before the expected fight they will face as an appetizer as the Peruvian naturalized Valentina Shevchenko fights the Brazilian Jennifer Maia, in flyweight.
7:34 PM2 years ago

There will be several fights before the stellar ones, which will be

Deiveson Figueiredo arrives to this appointment with almost perfect mark of 19 victories in 20 fights, remembering that this will be the first defense of his world title after beating Joseph Benavidez, after knocking him out in the stellar of Fight Island 2.
7:24 PM2 years ago

Perez has a record of 24 victories for 5 defeats, highlighting that he has three victories in a row. In his last presentation, Perez had no problem beating Jussier Formiga in the UFC 250.
7:19 PM2 years ago

They fulfilled the weighting

This Friday both Deiveson Figueiredo with 125 pounds and the Mexican-American Alex Perez with 124.5 pounds, complied without problems with the weighing in Las Vegas.
7:14 PM2 years ago

Thank you for the opportunity

Ranked fifth best, Perez acknowledged that it has not been easy to get here and thanked for the opportunity he has been given: "I have a lot of pride and joy, especially being part of the main event fighting for a title in Las Vegas, the fighting capital. It's amazing and a blessing," he said. 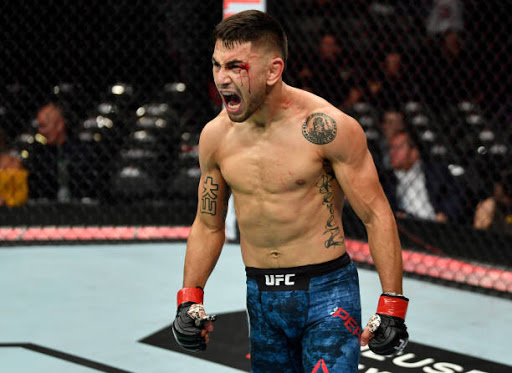 Prior to Saturday's fight, the Brazilian fighter confessed that no fight is easy and he will have to give everything on the octagon: "No fight is easy. Every fight is dangerous, people cannot underestimate anyone. I always train to fight with the best, on Saturday, I will make the fight easy for me". 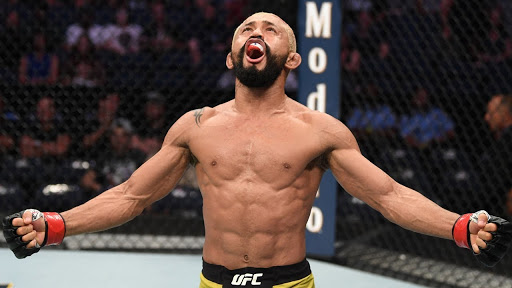 The Deiveson Figueiredo vs Alex Pérez fight will take place at the Las Vegas, Nevada. The start is scheduled at 10pm ET.
6:59 PM2 years ago

Welcome to VAVEL.com’s LIVE coverage of the fight Deiveson Figueiredo vs Alex Pérez!