Thank you for following the broadcast of the fight between Gallo Estrada and Chocolatito Gonzalez for the WBA and WBC unified titles.
12:55 AM9 months ago

The Gallo Estrada shook off the malaria and in the second edition defeated Chocolatito Estrada by split decision.
12:52 AM9 months ago

Thrilled by the victory

"I think it's a deserved win. He's a great fighter and I think we deserve the third fight," commented Gallo in a post-fight interview.
12:50 AM9 months ago

He got his revenge

El Gallo retaliated and pulled out the win, leaving Chocolatito to suffer his first setback against a Mexican fighter.
12:47 AM9 months ago

The fight of the year 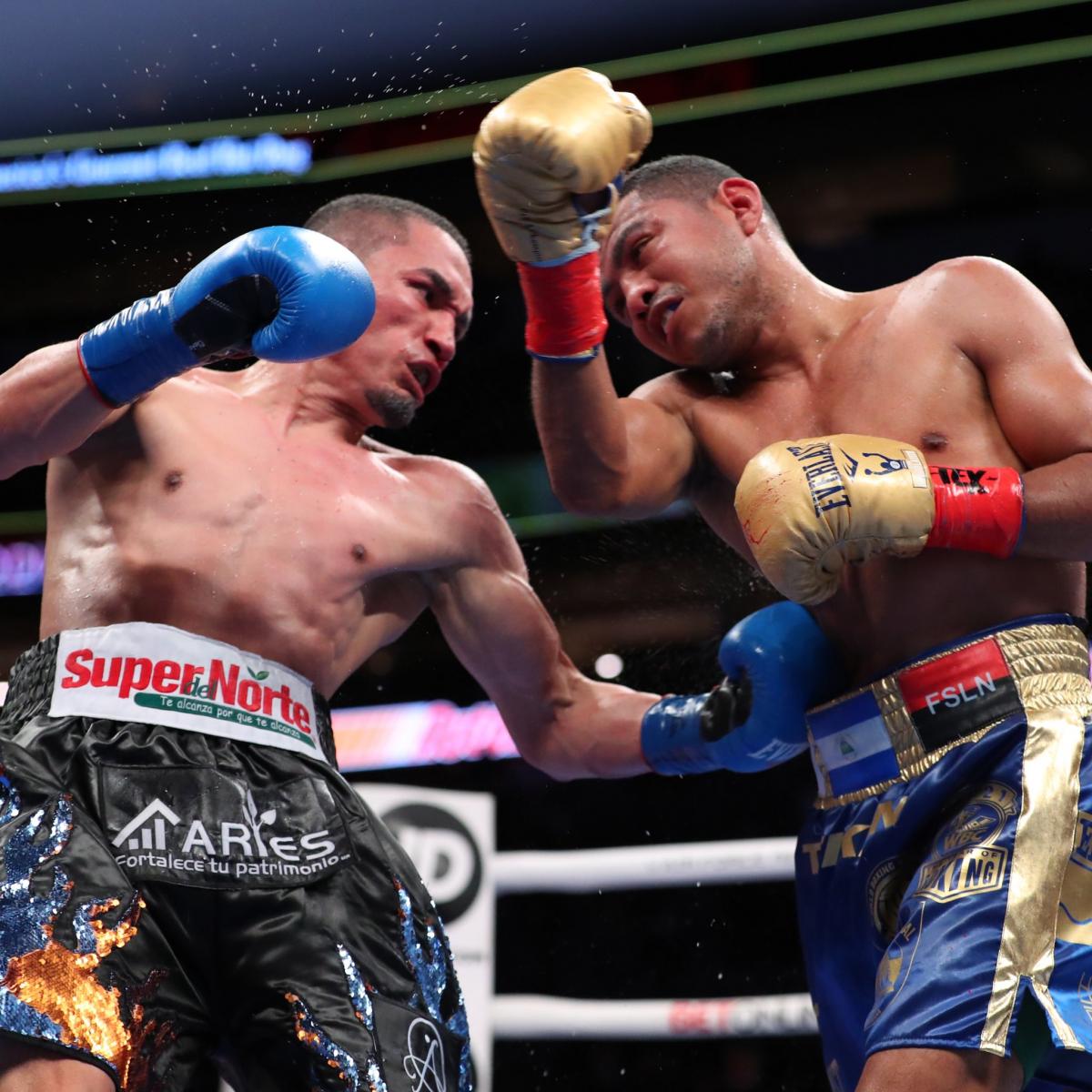 A wholesale exchange of punches in one of the best fights of the year. A punch from Chocolatito staggered Estrada, who held on and kept the punches coming. It will all come down to the scorecards.
12:39 AM9 months ago

The exchange of blows began again. El Gallo came out more determined to get in more punches, but Chocolatito continues to have more aim in the exchange where he has come out well.
12:35 AM9 months ago

Oper del Gallo is doing some damage, but Chocolatito can't get enough of throwing punches, many of which have been very effective in hitting his opponent's face. A very even episode with six minutes remaining.
12:31 AM9 months ago

El Gallo made an impact with a solid right hand that Chocolatito quickly answered with a powerful overhand right. The distribution of punches has been decreasing, but both fighters are looking for the knockout.
12:27 AM9 months ago

Chocolatito's bomb with the right that connects the face, before a Gallo who took a little more his distance, but did not stop insisting with the one two. Chocolatito was more mobile and dodged several punches.
12:23 AM9 months ago

Gallo's punches are going to the body and Gonzalez is going more to the face in the give and take that is getting good on the ring in one of the best fights of the year.
12:18 AM9 months ago

Although Chocolatito started better, El Gallo bounced back in the closing seconds with several right hands to both the liver and face that hurt Gonzalez.
12:14 AM9 months ago

Gonzalez's right hand connected cleanly, but El Gallo reacted with powerful straight rights and has been over 80% effective.
12:12 AM9 months ago

The red-hot exchange of blows 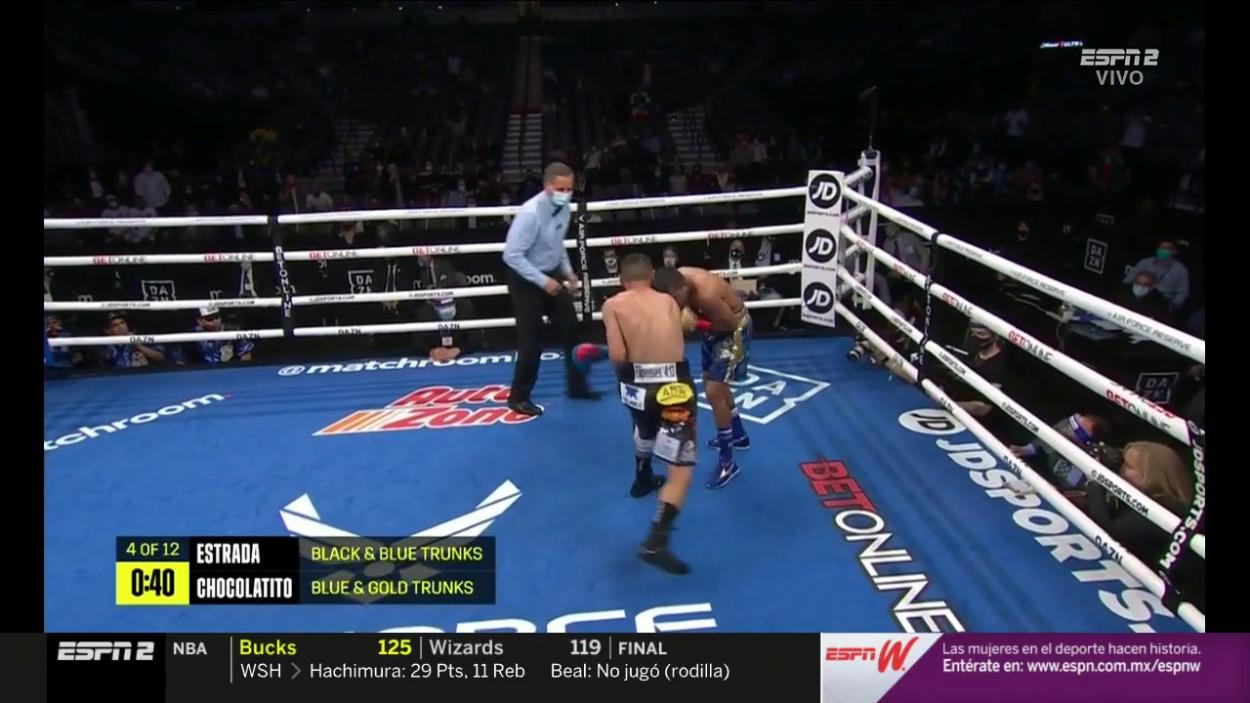 Now Gonzalez's lefts are getting in Estrada's face, who on a couple of occasions was left on the ropes and managed to get out of there.

The two fighters are exchanging punches that are getting the crowd pumped up.

Chocolatito exchanged blows throughout the episode, Chocolatito with straight rights, but Gallo Estrada answered in the counter-punches with a couple of hooks.
12:02 AM9 months ago

A powerful straight right that did some damage, but Chocolatito responded in kind with a pair of right hands that set the crowd on fire.

Gonzalez also connected with a right hand that went into the face of Gallo.

It was not a round of knowledge, El Gallo jumped in with a lot of momentum, however, Chocolatito started to land the rights that evened the first few minutes.
11:53 PM9 months ago

The Mexican presents himself

Juan Estrada arrives in Dallas for a shot at the WBC and WBA titles.
11:49 PM9 months ago

El Chocolatito, after some confusion, enters the ring to defend the pride of Nicaragua.
11:45 PM9 months ago

A tribute is being paid to former boxer Marvin Hagler, who died on Saturday at the age of 66.
11:38 PM9 months ago 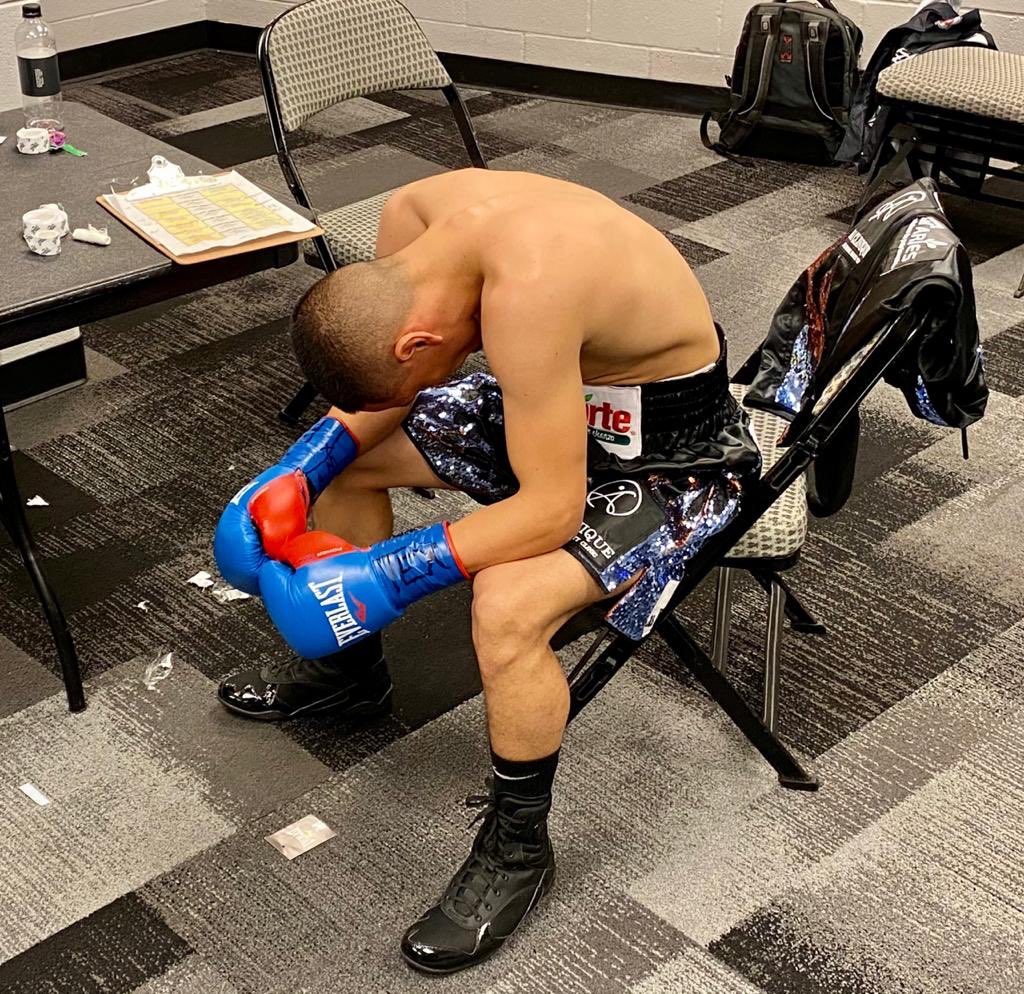 The fight between Jessica McCaskill and Cecilia Brækhus 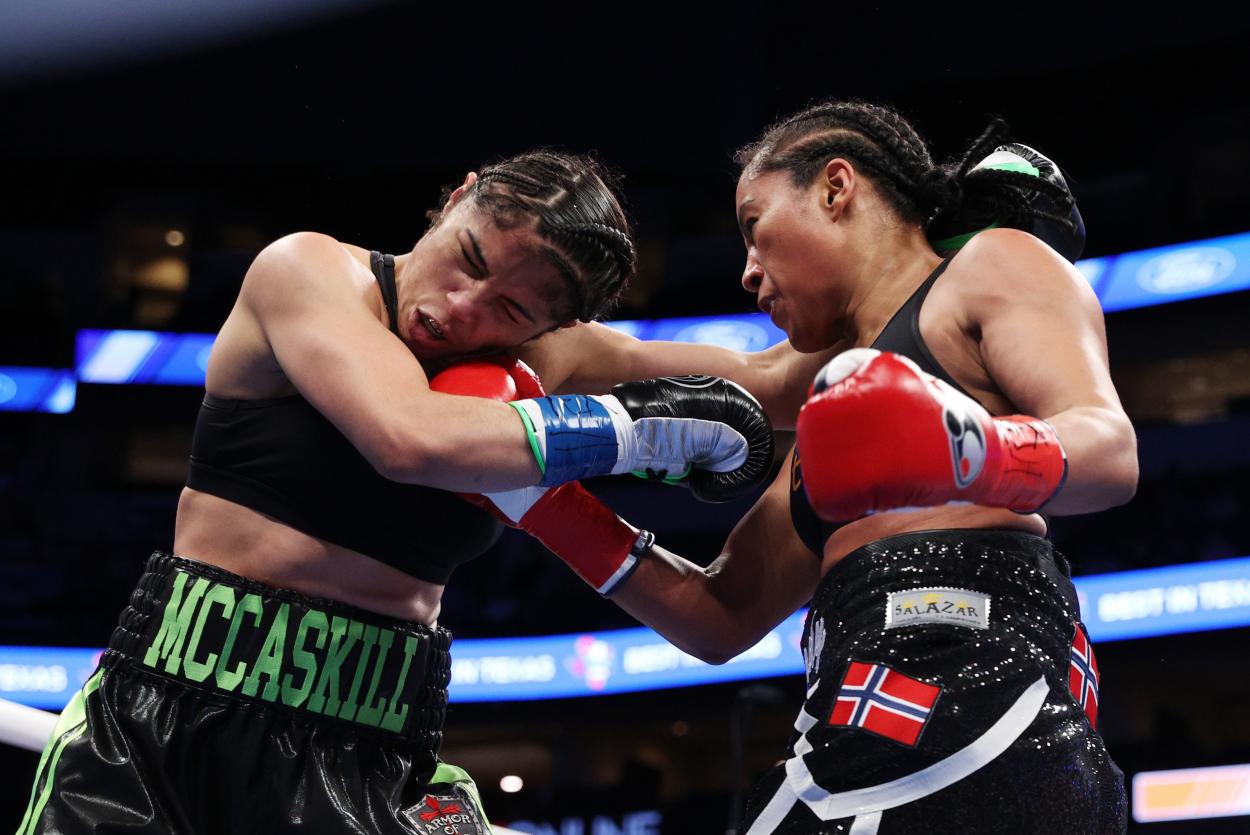 Cecilia Brækhus went all out in search of the knockout that would give her the win, but the arguments were insufficient to be able to do any damage to the champion Jessica McCaskill.
11:27 PM9 months ago

The wear and tear is already showing on both boxers, although Jessica McCaskill is in control of the action and looks set to defeat Cecilia Brækhus on the scorecards.
11:24 PM9 months ago

Jessica McCaskill started to get more animated with her forehand and Cecilia Brækhus started to over-hug, so she has been deducted a point.
11:19 PM9 months ago

Cecilia Brækhus continues to improve and her left foot caused damage to Jessica McCaskill, who has now taken her distance and the fight is starting to even out.
11:17 PM9 months ago 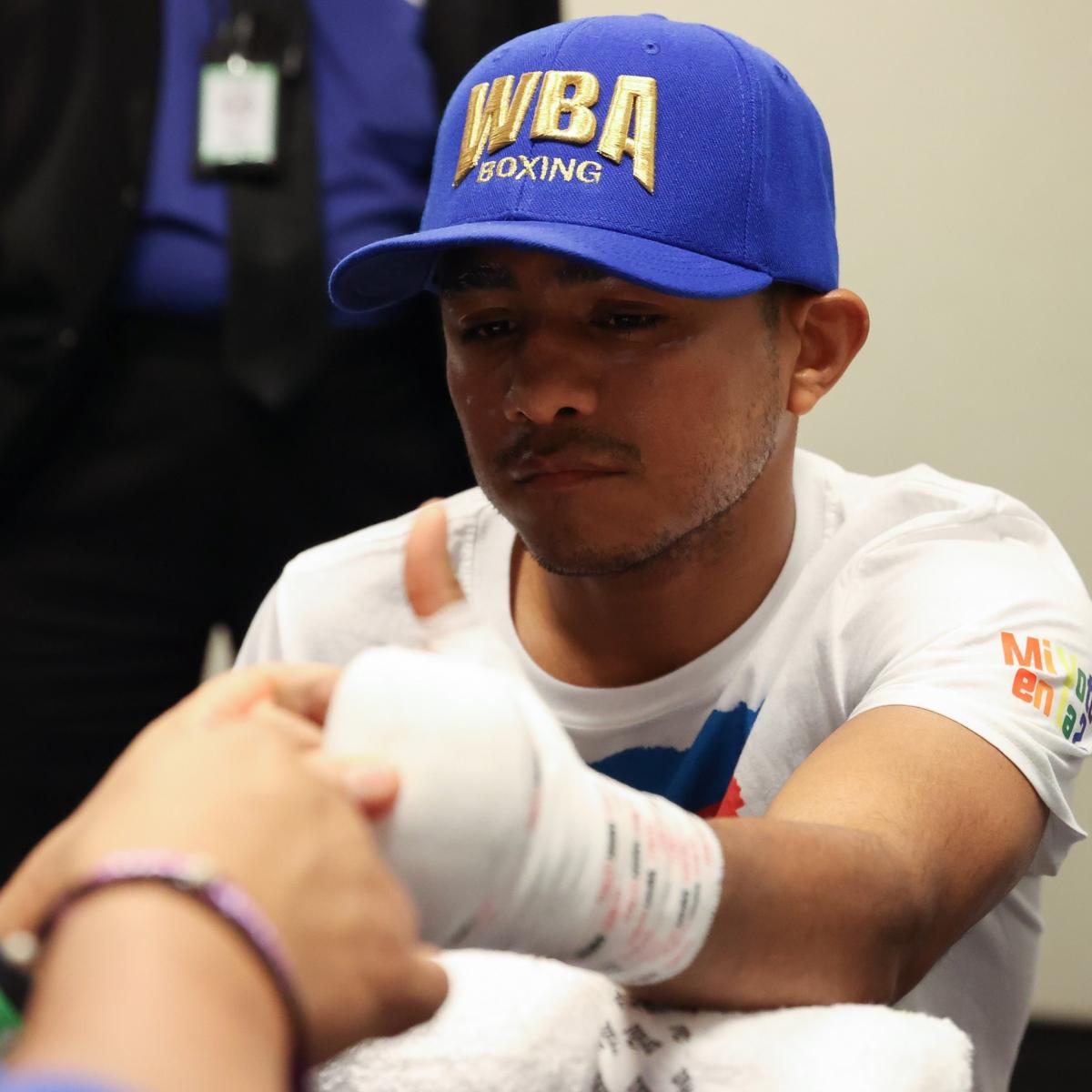 Cecilia Brækhus threw a left-footed punch down the stretch that hit Jessica McCaskill, who has struggled to regain control of the fight in the closing minutes.
11:11 PM9 months ago

Jessica McCaskill's explosiveness is wearing off and Cecilia Brækhus, in her own way, is starting to hold her back a little, but she will have to tighten up because she is clearly down on the cards.
11:08 PM9 months ago

Cecilia Brækhus is really mucking up the fight, hugging and slowing down the pace of the fight which has favoured Jessica McCaskill.
11:05 PM9 months ago

Jessica McCaskill again went to the front to land a couple of forehands that again staggered Cecilia Brækhusy who miraculously stayed on her feet.
11:02 PM9 months ago

Jessica McCaskill came out all guns blazing and on the final straight she unleashed a right that hit Cecilia Brækhus in the face.
10:58 PM9 months ago 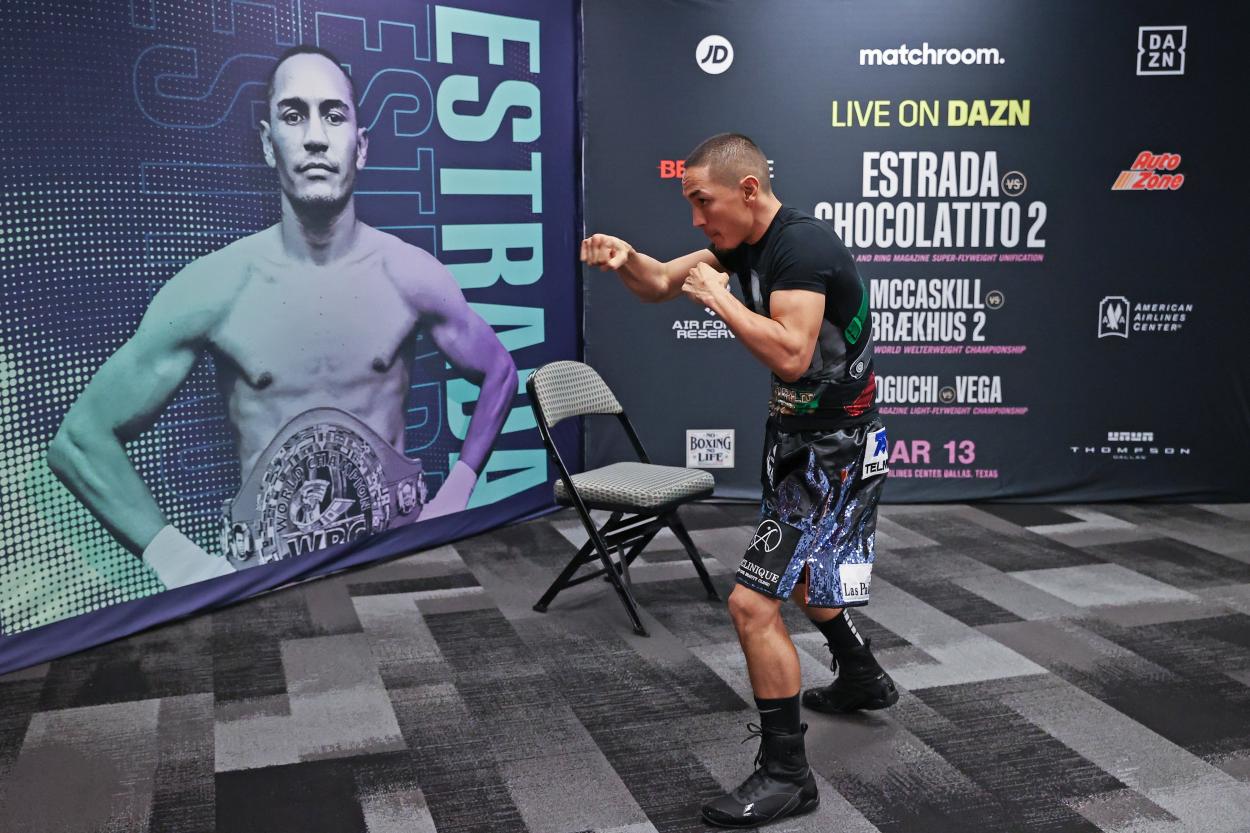 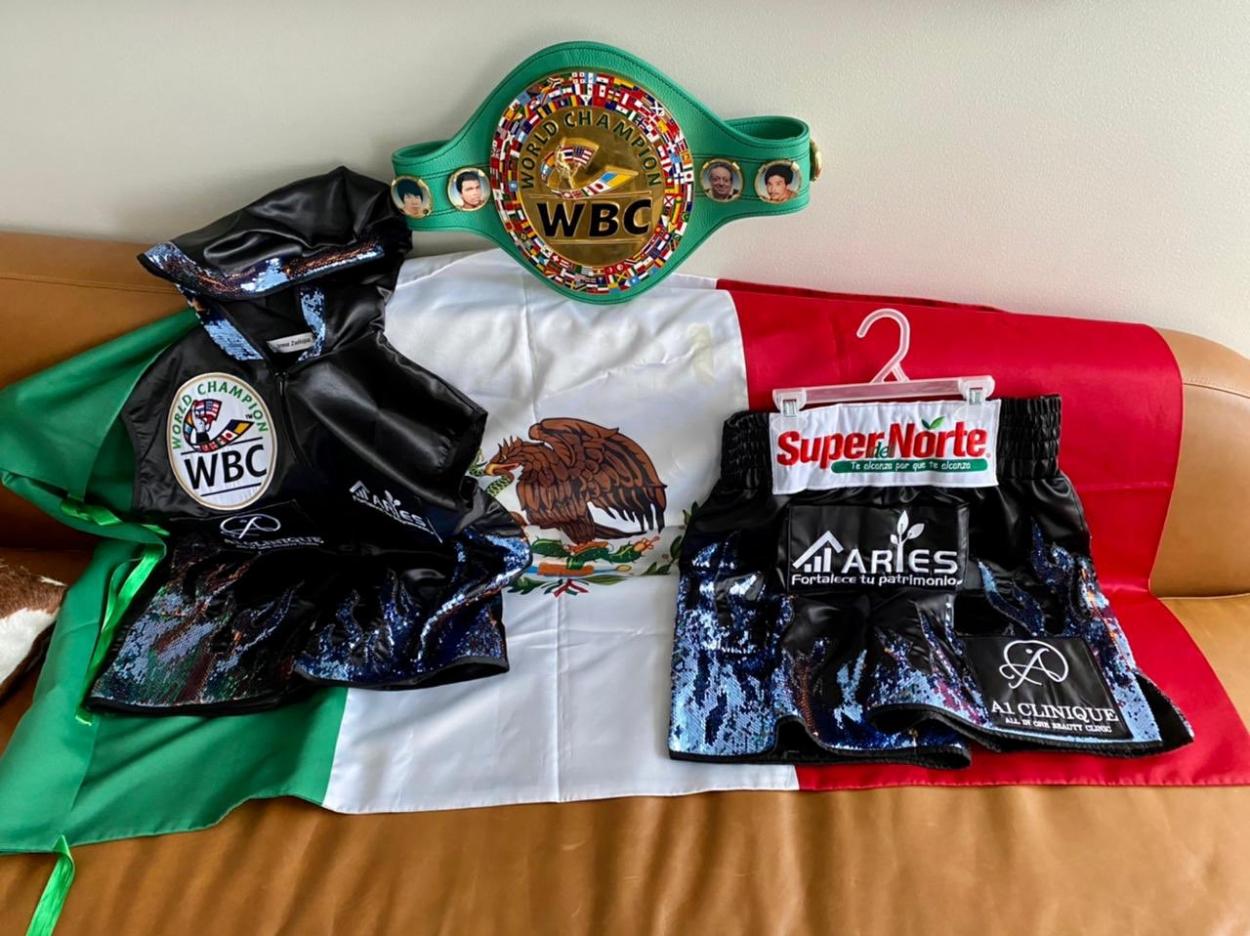 The referee stopped the fight in the middle of the round, as the Frenchman had a wide dominance over Echeverría who did not react and fell back to the canvas.
10:40 PM9 months ago

Cissokho sent Echeverría to the canvas, but was unable to knock him out due to the Mexican's reaction that spoiled the fight.
10:38 PM9 months ago

Gonzalez takes it easy in the minutes leading up to his fight against Estrada. 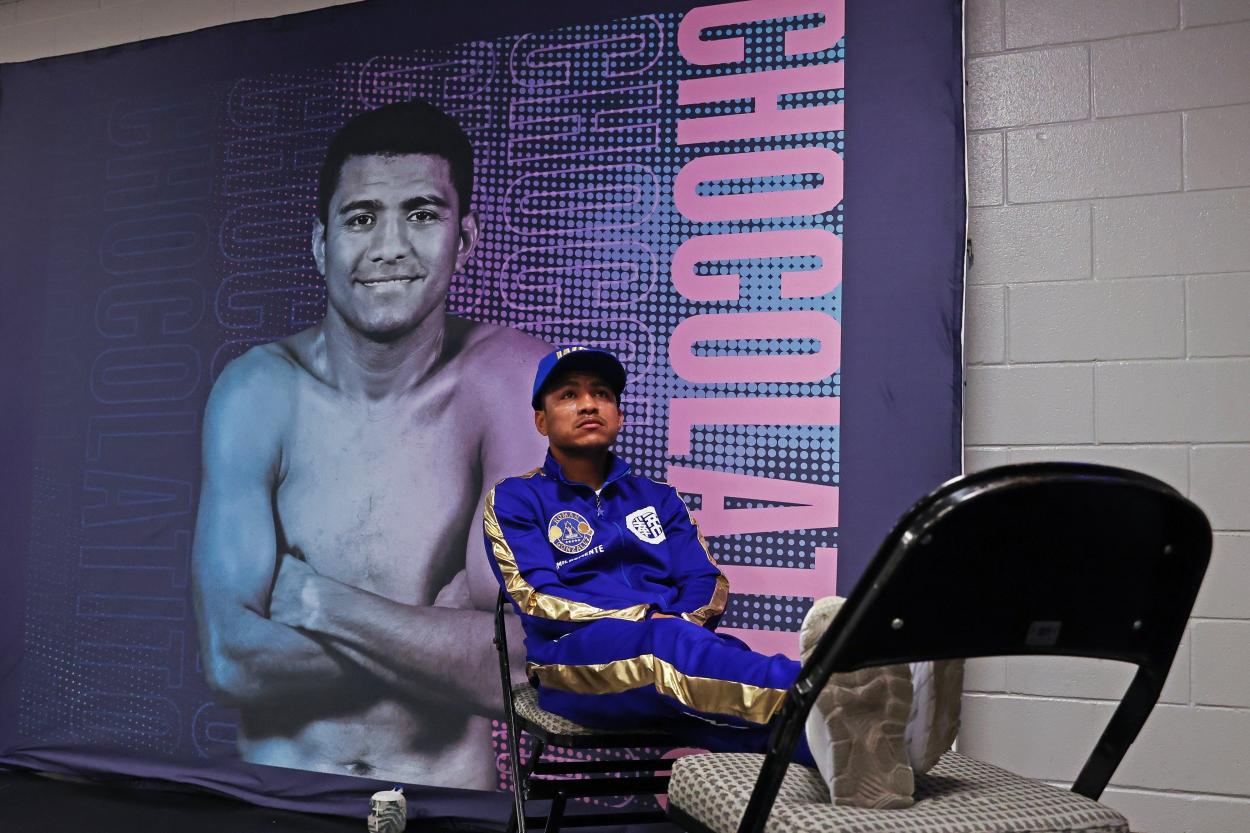 The Frenchman Cissokho again put the Mexican in bad conditions, who held on, threw several punches and managed to resist another episode in a fight that looks very uneven.
10:32 PM9 months ago

The Frenchman was far superior, who continued to generate damage with his forehand that sent the Mexican reeling, who fell in the first few seconds after another forehand that he was unable to contain.
10:28 PM9 months ago

Cissokho was much better on the canvas, where the Frenchman did not put the pedal to the metal and caused Echeverría, who did not know how to control the European, to fall due to a slip.
10:25 PM9 months ago

Cissokho looked superior from the first minutes against the Mexican Echeverría, who failed to defend himself in the best way and allowed a couple of hooks to hurt him.
10:20 PM9 months ago

Mexican Daniel Echeverría is already in the ring to fight Souleymane Cissokho.
10:16 PM9 months ago

Jessica McCaskill vs. Cecilia Braekhus will take to the ring for the night's co-main event.
10:12 PM9 months ago

In the moment of releasing the blow to the Asian's face, Aragon hurt his hand and left him unable to continue in the fight.
10:09 PM9 months ago

The fight was over. One punch from Kyoguchi was more than enough to defeat Aragon, although he was injured by a blow that prevents him from moving his right shoulder.
10:04 PM9 months ago

This is how people gather in Nicaragua to watch the fight. 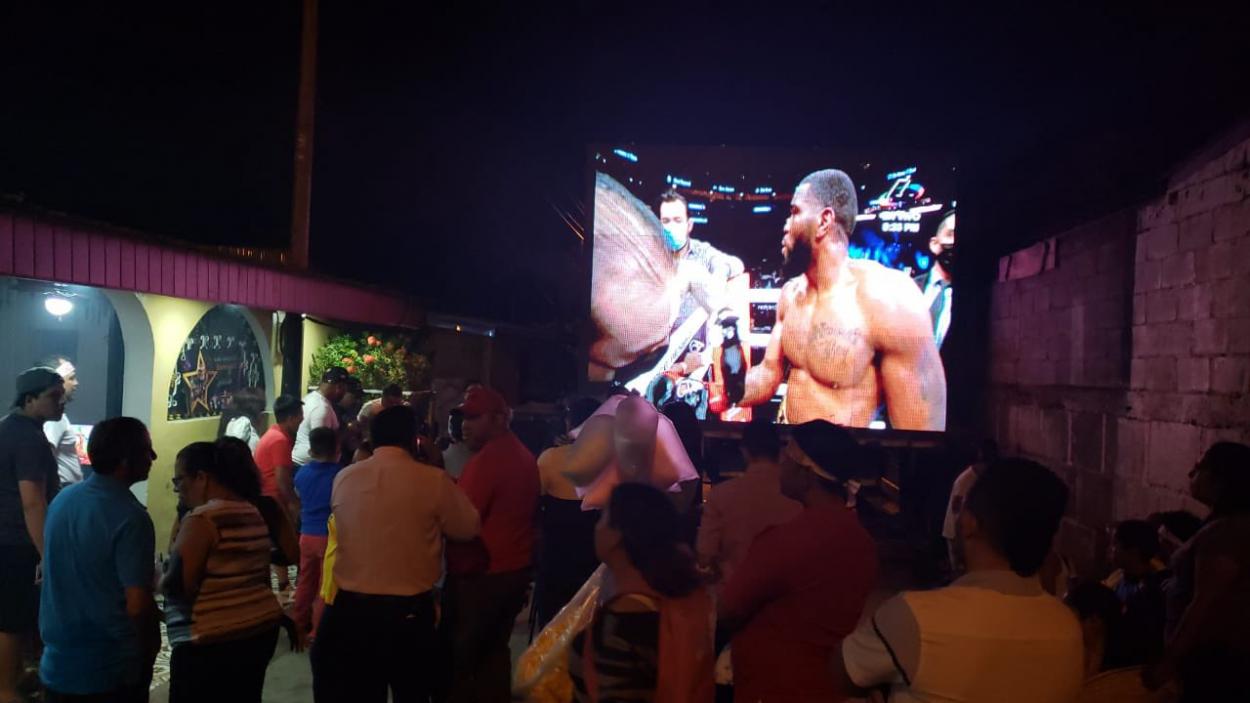 The Japanese was more reserved and decided to keep his distance, resulting in less exchange of blows compared to the previous period.
9:57 PM9 months ago

In an explosive second period, Kyoguchi pulled out the oper, but the Mexican came back and hit the Asian's face on several occasions.
9:53 PM9 months ago

Kyoguchi with more initiative in the first minutes, dropping a couple of hooks that Aragón Vega has eluded.
9:51 PM9 months ago 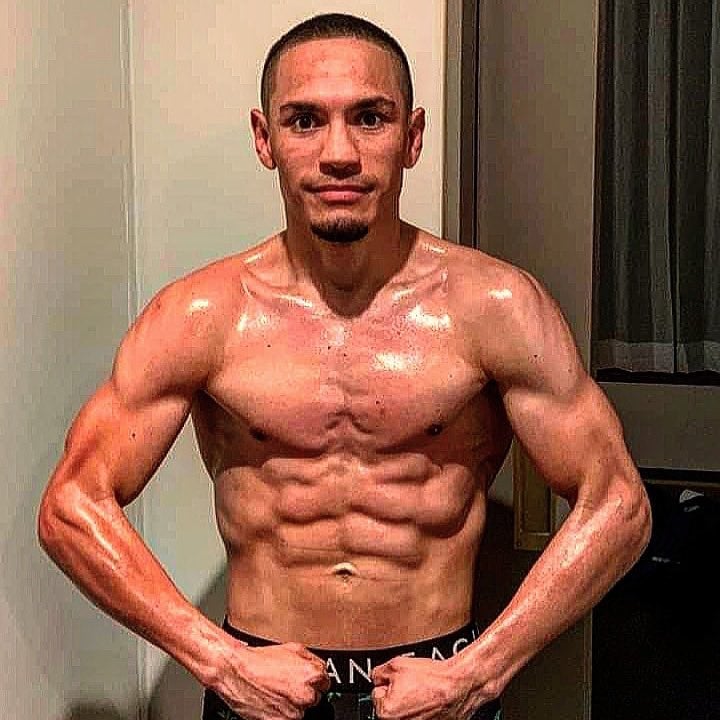 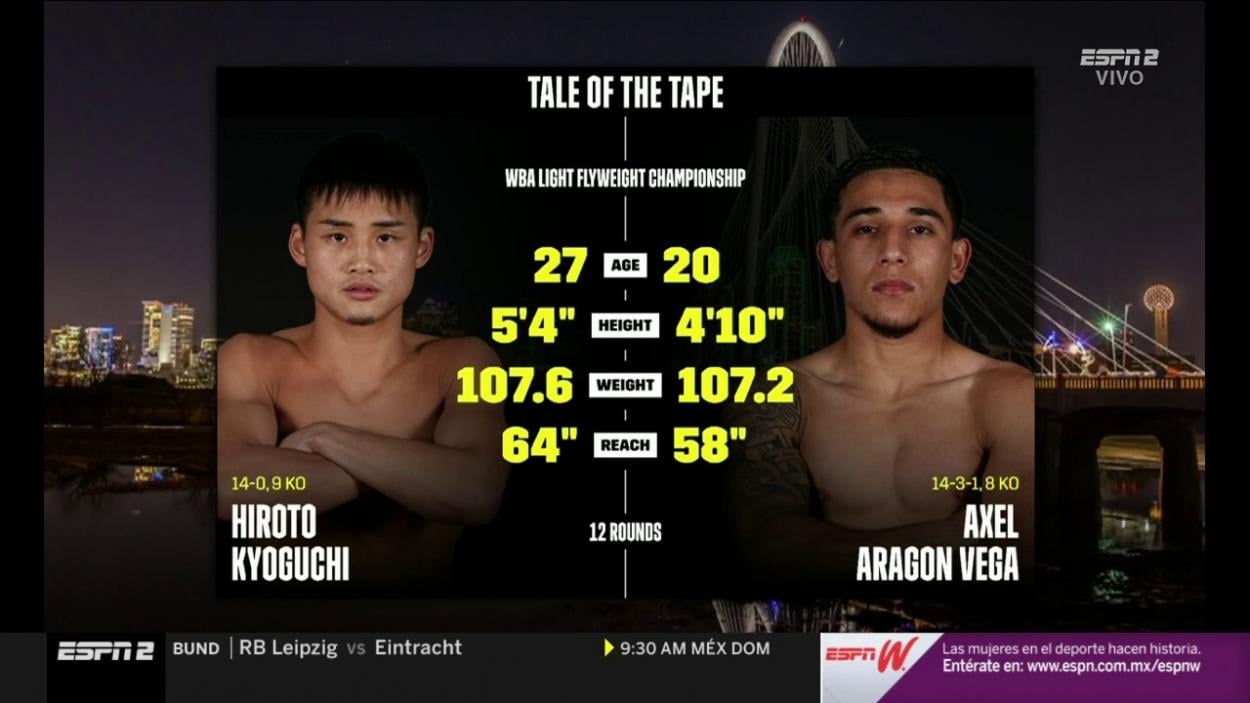 Mexican fans all over the world are always supporting and in Dallas it is no exception to cheer on Gallo Estrada. 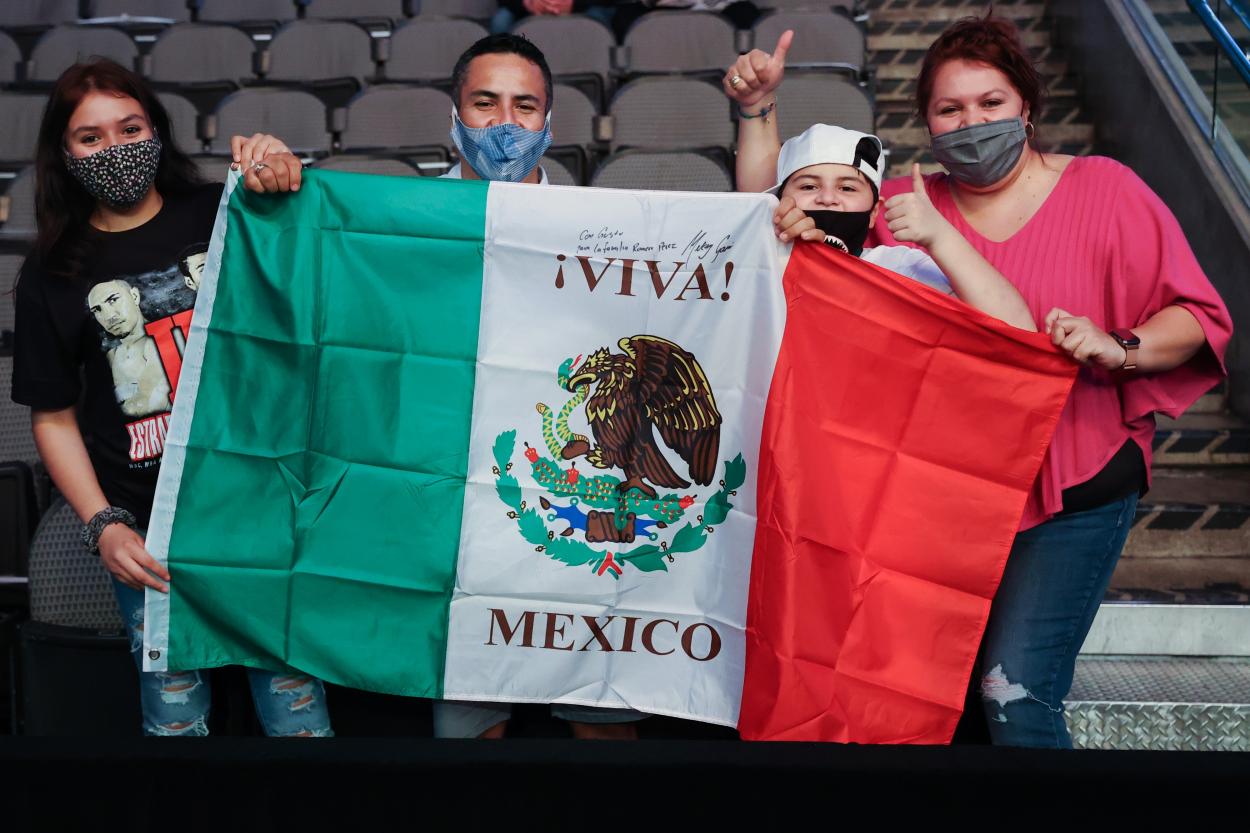 This is what the American Airlines Center venue looks like for the rematch between Chocolatito and Gallo. 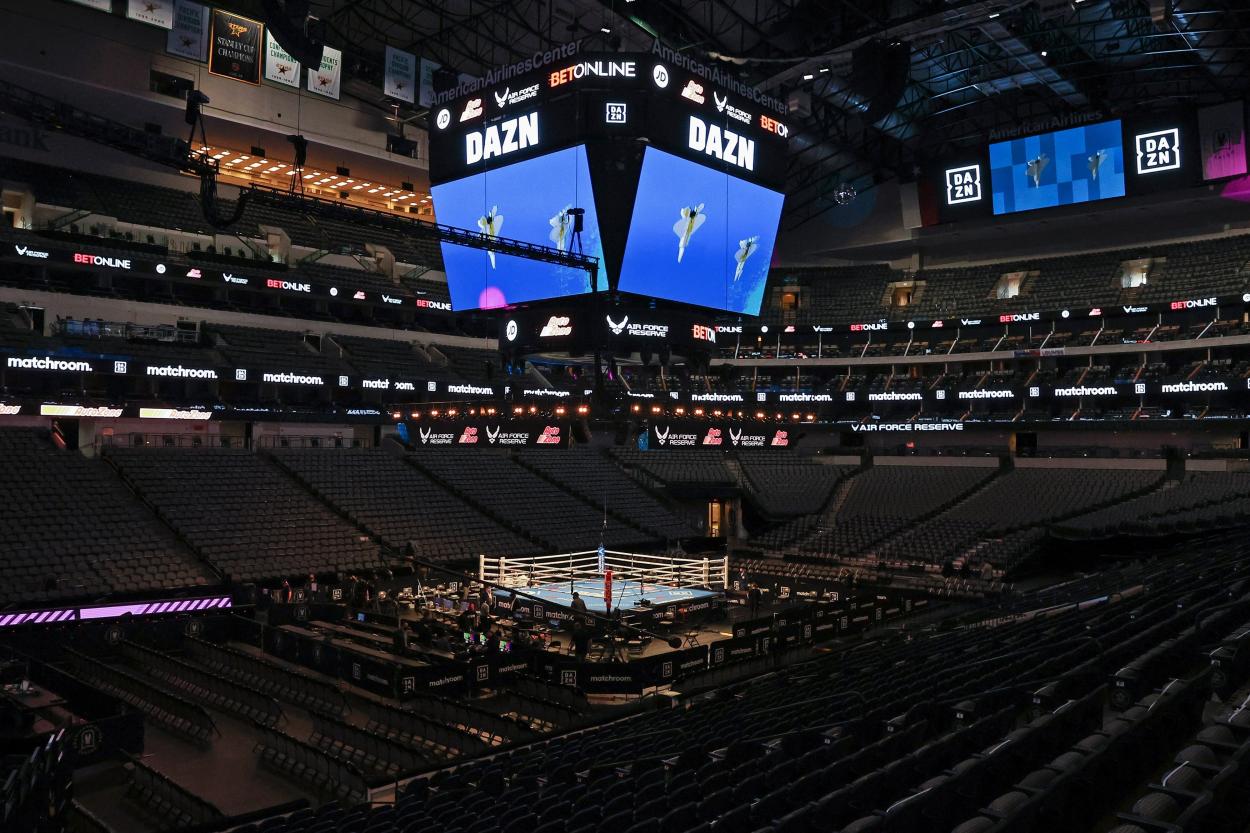 The rematch came nine years later and this Saturday Gallo Estrada and Chocolatito Gonzalez will meet face to face in the ring. We start with the coverage.
5:34 PM9 months ago

Do not miss a detail of the match with the live updates and commentaries of VAVEL. Follow along with us all the details, commentaries and analysis for this WBC and AMB Super flyweight World Championship fight Gallo Estrada vs Chocolatito Gonzalez.
5:29 PM9 months ago

The Nicaraguan has a record of 50 wins (43 by knockout) and two defeats; his last fight was in October 2020 when he defeated Israel Gonzalez by unanimous decision. 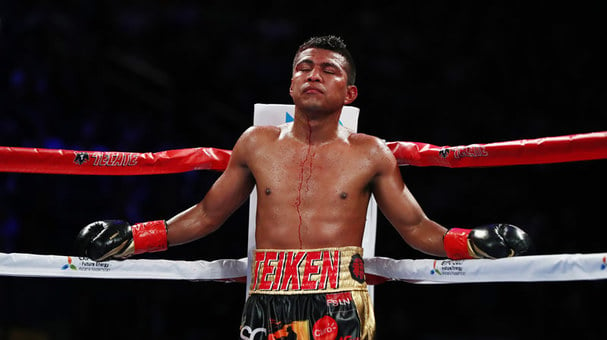 The Mexican has a record of 40 wins (27 by knockout) and three defeats; his most recent fight was on October 23rd when he defeated Carlos Cuadras by knockout. 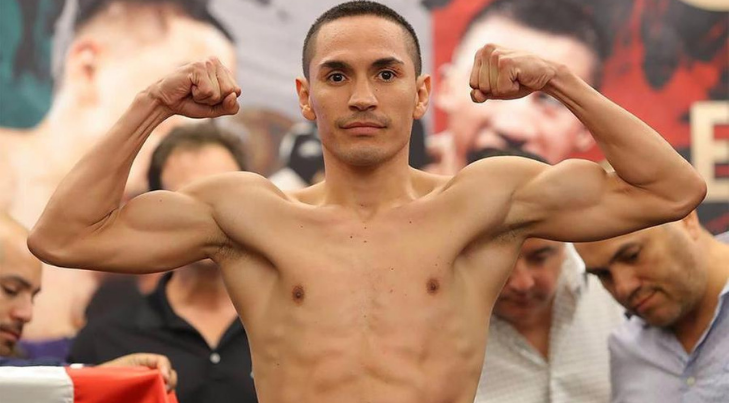 This Friday both Gallo Estrada and Chocolatito Gonzalez complied with the 121 lbs. weigh-in, in addition to testing negative for coronavirus and everything is ready for the fight.
5:04 PM9 months ago

The Chocolatito has the measure of Mexican fighters and has defeated 20 of them, starting on March 30, 2007.
4:59 PM9 months ago

Focused on winning by way of knockout

The Gallo made it clear that he does not want to leave any doubts in order to become unified title champion:

"I'm going to focus on knocking out Roman Gonzalez, because I don't want to leave any doubts, simply because of that."

These two fighters met on November 17, 2012 with a vibrant fight that ended by unanimous decision of the judges in favour of "Chocolatito" Gonzalez, who retained the WBA title at that time. 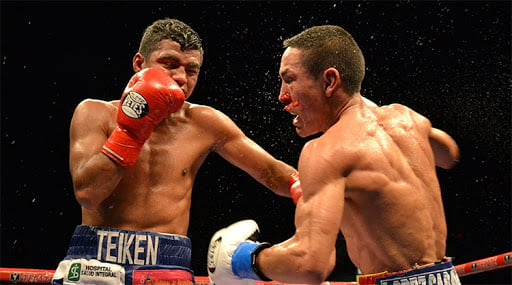 The Gallo Estrada vs Chocolatito Gonzalez fight will take place at the Dallas (American Airlines Center). The start is scheduled at 10pm ET.
4:44 PM9 months ago

Welcome to VAVEL.com’s LIVE coverage of the fight Gallo Estrada vs Chocolatito Gonzalez!