Thank you for following the rebroadcast of the fight between Vaquero Navarrete and Pitufo Diaz, where the Mexican retained his WBO featherweight title.
11:03 PM7 months ago

One of the moments of the eighth round

🎥 Navarrete is stepping on the gas as the fight gets deeper, scoring two more knockdowns in Round 8.

This is how the Smurf ended

What a pep talk here before Round 12 from Nelson Rodriguez to Pitufo Diaz. Imagine not being fired up after this.#NavarreteDiaz final round starts now on ESPN & ESPN+ pic.twitter.com/2wgh7yxsU0 — Top Rank Boxing (@trboxing) April 25, 2021

This is how El Vaquero celebrates his victory 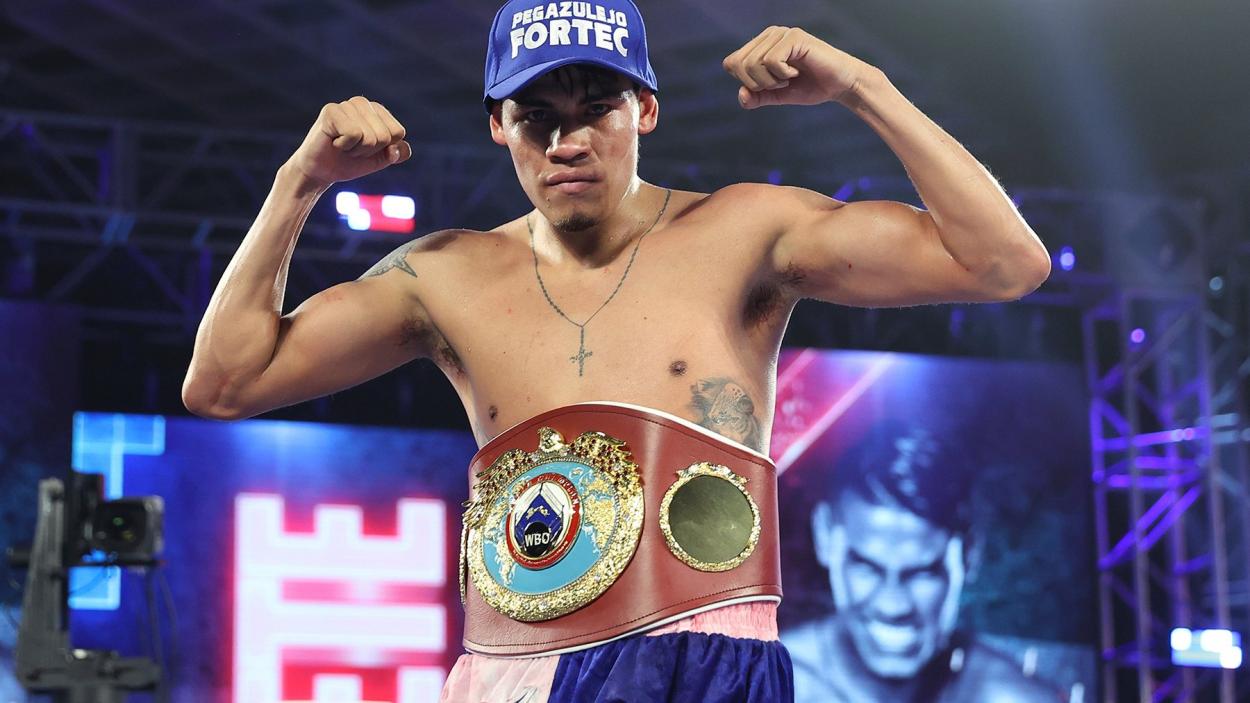 Samples of the battle

Diaz's injury flared up in the final seconds so the corner called for the fight to be stopped.
10:57 PM7 months ago

El Pitufo came out with everything, throwing punches left and right, but the Cowboy put him calm, released several punches and began to embrace to slow the pace of the fight, and in the end the Cowboy finished him off with relentless punches, the canvas fell again and the corner asked not to leave. Victory for the Mexican.
10:52 PM7 months ago

El Pitufo knows he is down on the scorecards and has turned to the front in search of the knockout, but has run up against a Vaquero who has managed the pace of the fight, but has not been able to hit back in the area where the Puerto Rican is hurt.
10:48 PM7 months ago

At times the distribution of blows between the two fighters has begun, but the pace has been imposed by the Cowboy, who takes things calmly and has now taken his distance to secure the fight in the remaining minutes.
10:44 PM7 months ago

Despite the cut, El Pitufo has come back and connected a straight that generated damage, although El Vaquero still has the upper hand and now takes his distance because he knows that the fight and the cards are in his favor.

It should be noted that Navarrete went down, but it was a stumble.

The Pitufo received a powerful blow that sent him to the canvas and seconds later he fell again, but his cheekbone was already swollen and this could be in favor of the Mexican.
10:36 PM7 months ago

The referee again calls the attention to the Smurf for a blow from behind and takes away a point, although the Puerto Rican continues with the movements to dodge punches, but he has lacked efficiency and power in his attempts. Now Navarrete can't get the measure of him.
10:34 PM7 months ago

It seems that El Pitufo starts with desperation because he threw punches from behind and low blows, so the referee called him to attention.
10:27 PM7 months ago

At times there was an exchange of blows where both connected with power, however, Navarrete continues to be very erratic when releasing the volados with poor effectiveness.
10:23 PM7 months ago

The Vaquero was unable to find the distance, until half a minute before the end of the game, when he unleashed a left-footed shot that left El Pitufo hesitating, who, in the end, had to embrace to hold on for the last few seconds.
10:22 PM7 months ago

Despite Pitufo's movements, Cowboy was able to connect a couple of jabs that hit Diaz's face, but without doing any serious damage.
10:15 PM7 months ago

Now it is the Smurf who starts with lateral movements, knowing that the Cowboy has a longer reach and usually always goes forward in search of generating damage. Very close fight so far.
10:10 PM7 months ago

Navarrete has taken the initiative and with a lot of waist movement has taken the lead, although neither did any severe damage to the opponent.
10:08 PM7 months ago

At this moment the bell rings and the bout has begun.
10:05 PM7 months ago

The face to face between the two boxers 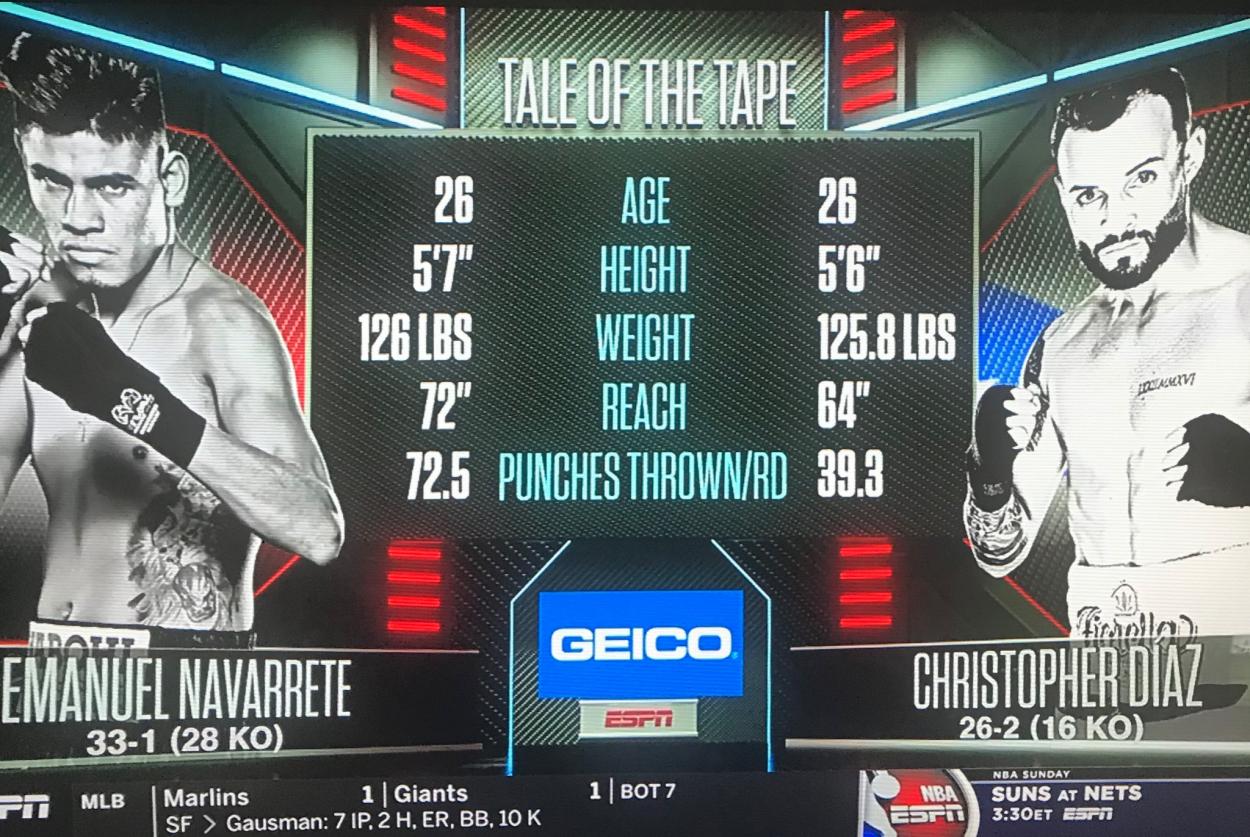 With hat and all

Navarrete makes his arrival to the Arena, hat and all, remembering that he is undefeated in championship fights.
10:03 PM7 months ago

Pitufo Diaz is already in the ring to face this fight.
10:00 PM7 months ago

In minutes the champion will be released 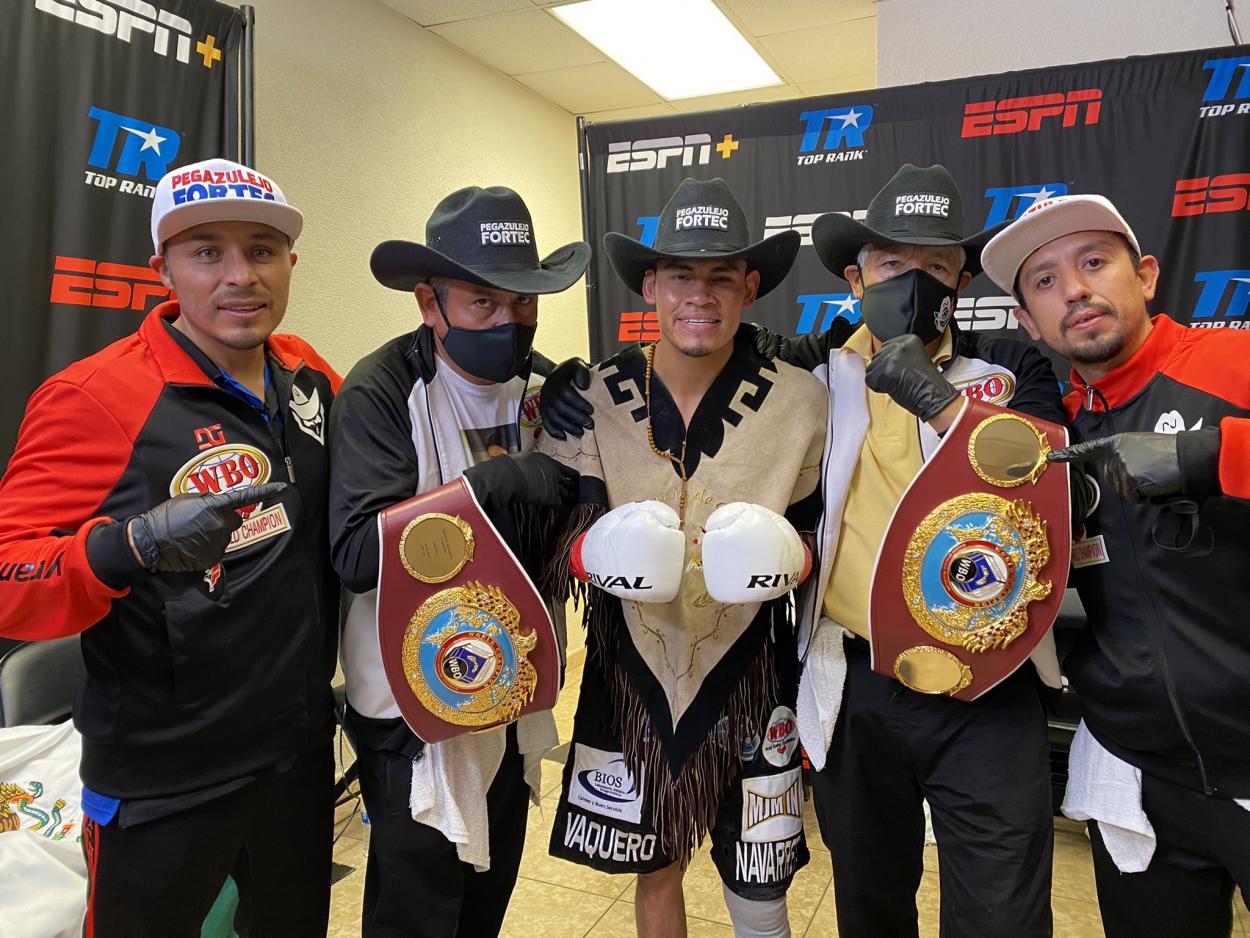 Who will impose conditions tonight? 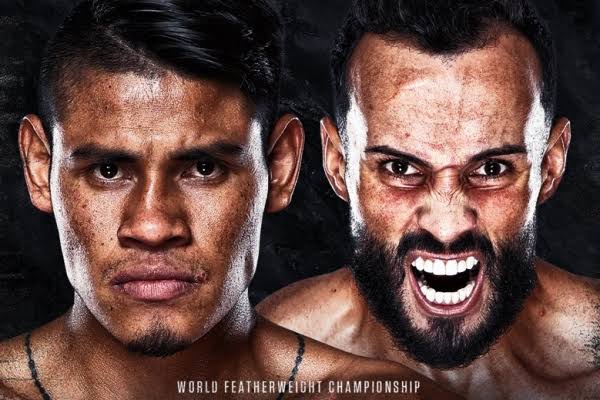 We are just minutes away for the Mexican Vaquero Navarrete to make his ring debut against Puerto Rican Pitufo Diaz.
9:49 PM7 months ago

Navarrete's only loss came in 2012 when he lost to Daniel Argueta in the fourth round.
9:45 PM7 months ago

Last seconds of Berlanga vs Nicholson 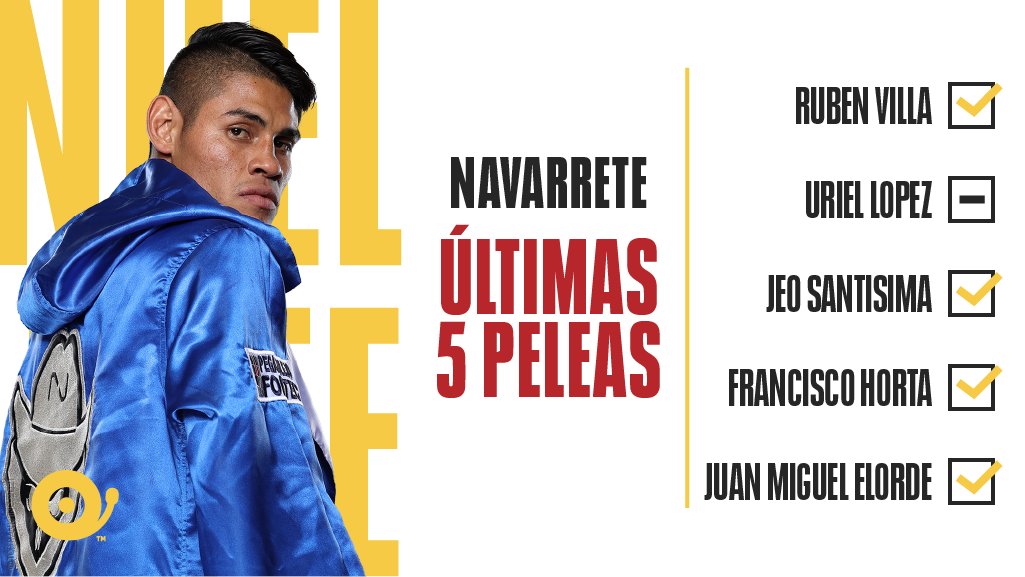 Berlanga ultimately pulled out a unanimous decision victory over the American Nicholson in eight rounds.
9:38 PM7 months ago

Berlanga's withering right hand finally sent Nicholson to the canvas in the final seconds to pull out the victory, in a fight that will leave him with many lessons to learn.
9:36 PM7 months ago 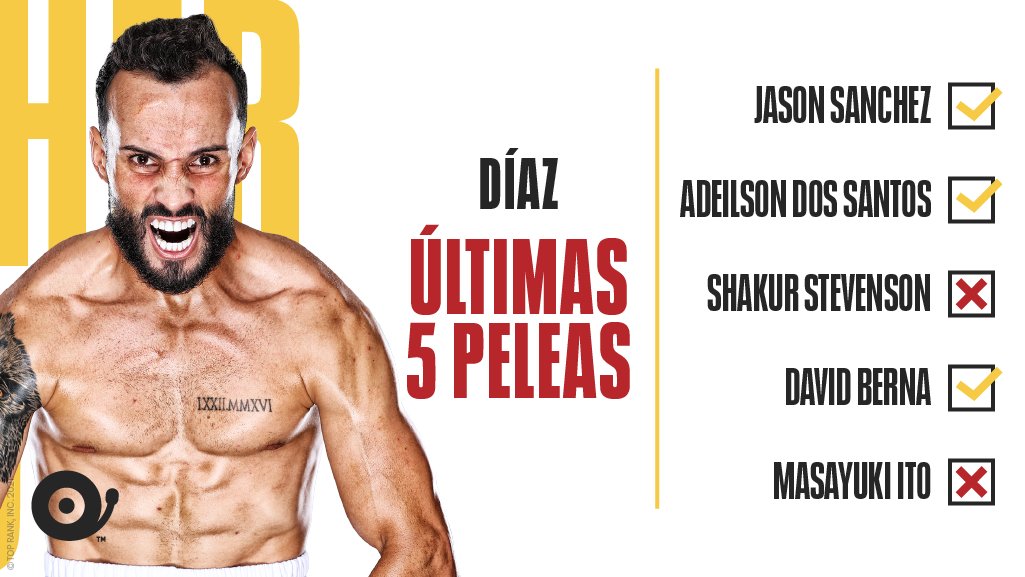 Although he is going to take the victory, Berlanga is disconcerting and for a moment it is Nicholson who takes the baton of the fight, but his technique and strength do not help him to impose conditions.
9:30 PM7 months ago

Berlanga looks desperate, as it is the first time that an opponent has held him so much, but despite this, he launched several volados that hurt Nicholson, who continues to resist.
9:26 PM7 months ago

Nicholson fell back to the moon for the third time and as best he could, he resisted Berlanga's punch with hugs and even shoves.
9:21 PM7 months ago

Berlanga has not been able to continue marking his superiority and has allowed Nicholson to gain confidence and has endured more of his opponent's punches, in addition to starting to drop some hooks.
9:17 PM7 months ago

Berlanga is still much better, but does not manage to finish his opponent, who fell to the canvas again but continues to resist on the ring.
9:13 PM7 months ago

Nicholson resisted the second period despite falling to the canvas, against a Berlanga who has shown superiority and where patience will be the key.
9:09 PM7 months ago

First round of acquaintance between Nicholson and Berlanga, where the second fighter asked the stands for calm because of all the shouting that was heard.
9:08 PM7 months ago

Although they are not in Puerto Rico, there are many Caribbean people in Kissimmee, Florida, so the support is very strong in favor of the Smurf.
9:06 PM7 months ago

This is how they support the Smurf in Puerto Rico 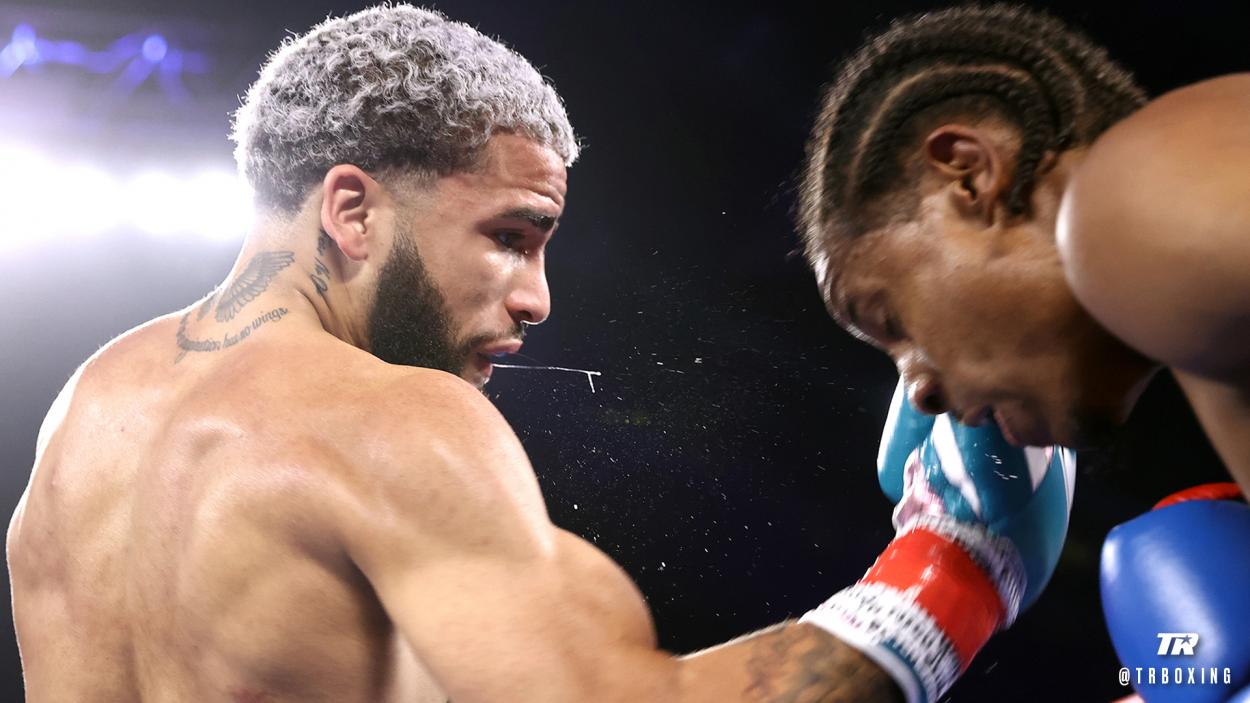 The fight between Edgar Berlanga vs. Demon Nicholson is coming up, on the bill that will close with the Navarrete vs Diaz fight.

✌️ MINUTE WARNING@EdgarBerlangaJr got next as the #NavarreteDiaz main card is set to start on ESPN & ESPN+ pic.twitter.com/YAToxzYrBD

Vaquero Navarrete will look to retain his WBO featherweight title when he takes on Pitufo Diaz, in a night that promises plenty of excitement. We begin.
4:34 PM7 months ago

Do not miss a detail of the match with the live updates and commentaries of VAVEL. Follow along with us all the details, commentaries and analysis for this WBO featherweight World Championship fight Emanuel Vaquero Navarrete vs Christopher Pitufo Diaz. 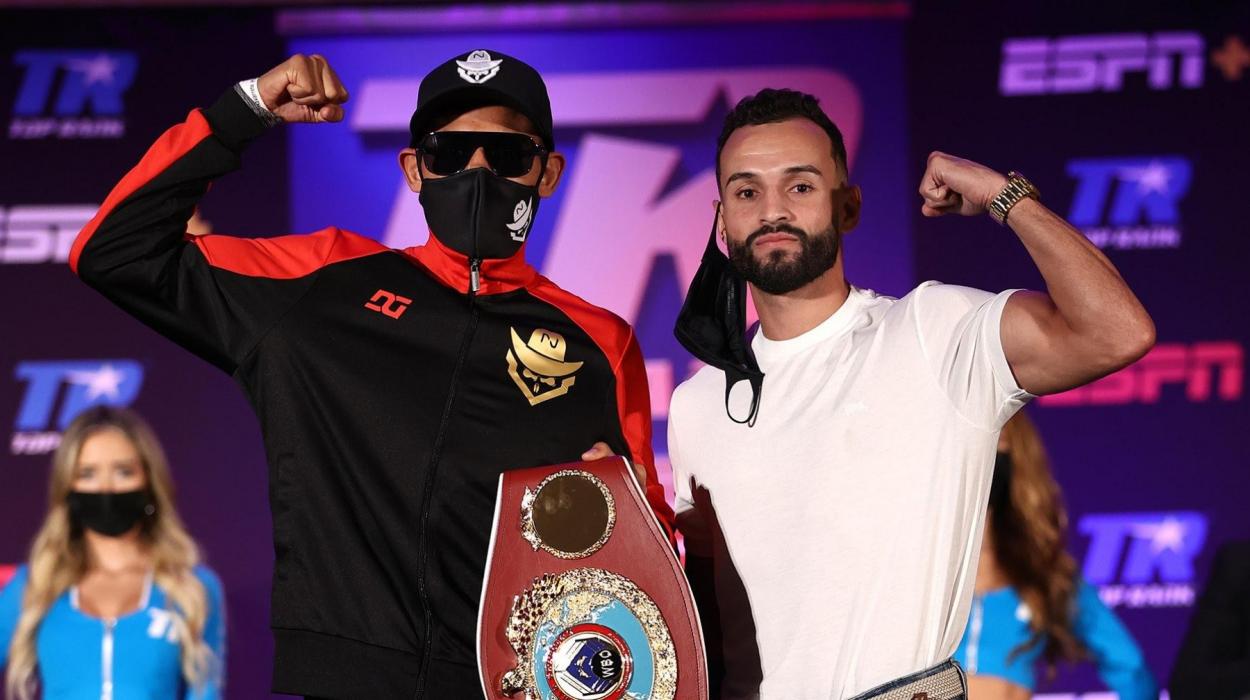 This will be the complete card for this Saturday:

The Puerto Rican has a record of 28 wins (26 by KO) and only two losses. His last fight was on June 23, 2020 when he defeated American Jason Sanchez. 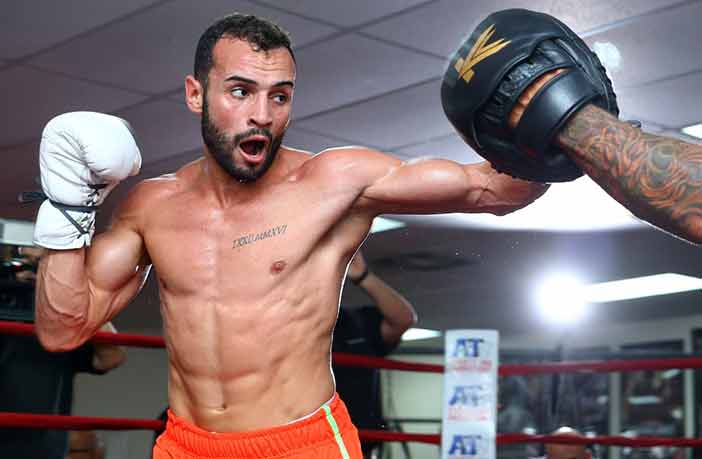 The Mexican has a record of 32 wins (27 by knockout) and one loss; his last fight was on October 9 when he defeated American Ruben Villa by unanimous decision. 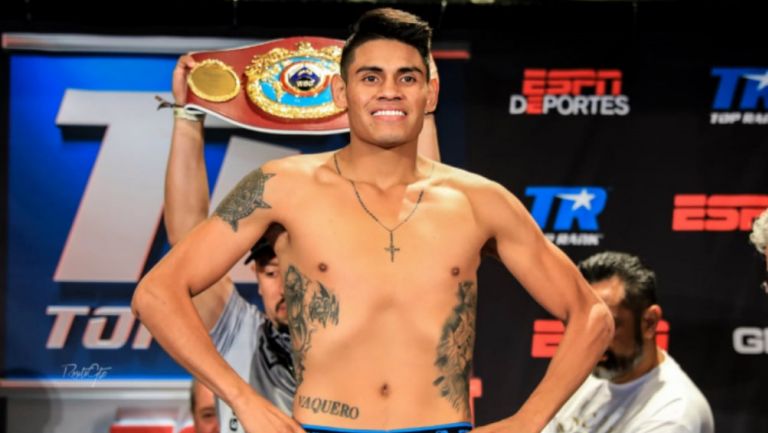 This Friday both fighters met the 126 lbs. weigh-in and declared themselves ready to face their first fight of 2021.
4:04 PM7 months ago

He is confident in his abilities

El Pitufo considered that his opponent has not faced an opponent of his characteristics, so agile and puncher that can cause him damage.

"The speed, movement and strength will favor me, Navarrete has not faced a fighter as puncher as me. Villa only had five knockouts, he had nothing to stop him and still, he beat him half the fight."

The Vaquero said he is prepared for any kind of strategy that his opponent may pose to him in the ring.

"I think Pitufo is going to fight in a way that may not favor me and try to take advantage because of his speed. But we work a lot on those aspects. We're going with someone who's going to move a lot. We are prepared for any strategy.

Consolidating himself as the best

Already with a world title, the Mexican Navarrete wants to stop being a promise to become one of the figures of international boxing and tonight he will have a litmus test.
3:49 PM7 months ago

The Emanuel Vaquero Navarrete vs Christopher Pitufo Diaz fight will take place at the Florida (Silver Spurs Arena). The start is scheduled at 10pm ET.
3:44 PM7 months ago