Thank you for listening to this match here on VAVEL. Have a nice day and see you next time!
7:37 AM2 months ago

Now Argentina faces the Netherlands in the final, which takes place on Friday (6) at 6am! At 9:30 pm on Thursday (5), India faces Great Britain for the bronze medal!
7:35 AM2 months ago

Argentina is in the field field hockey final at the Olympics!
7:34 AM2 months ago

With 20 seconds left, the goalkeeper saved a shot from a distance! The VAR now reviews a dangerous ball from the goalkeeper.
7:29 AM2 months ago

With 53% of possession, Argentina tries to dictate the rules of the game at this end, trying more and more to get into the opponent's area!
7:23 AM2 months ago

Now India has a penalty corner, as the ball caught the Argentine defender. In the end, goalkeeper Succi made a beautiful save!
7:22 AM2 months ago

Argentina tries to attack, but sends the shot wide, missing the chance to increase the score.
7:17 AM2 months ago

The fourth and final half begins with possession for Argentina! And we go to the last 15 minutes of the game that will decide another finalist in the field field hockey Olympics!
7:14 AM2 months ago

With India going on the attack, but unable to finish, the third quarter ends with a partial victory for Argentina!
7:11 AM2 months ago

Possession at the moment is 52% for Argentina to 48% for India. A slight change after last time.
7:04 AM2 months ago

And Argentina has a penalty corner after the ball catches the defender's feet! Argentina's shot was stopped twice, but with another penalty corner, which this time was for the goal, that after review of the VAR was confirmed, with the turnaround of Argentina with Barrionuevo's goal once again!
6:57 AM2 months ago

After reviewing the VAR the penalty corner was not given. We still have 1-1 on the scoreboard!
6:57 AM2 months ago

A penalty corner is reviewed for Argentina at the moment.
6:53 AM2 months ago

With one goal each, the second quarter ends in a tie! And now we go to halftime of the match, which will be back in a moment!
6:40 AM2 months ago

Now the one with the penalty corner is Argentina, with a play on the left side where the Indian player touched the Argentinean forward with her stick! The shot was blocked by the Indian defense!
6:39 AM2 months ago

The free kick was reviewed and overturned! We continue with a 1-1 score and possession for Argentina.
6:37 AM2 months ago

A penalty corner - the famous free kick - for India, which would be the third in a row, is being reviewed by the "VAR" at the moment.
6:35 AM2 months ago

On a play from the left, the ball caught Argentina's hand, generating a free kick for India, who hit it hard but the Argentina goalkeeper caught it! And soon after, in the tirade of the defense happened gold free kick because the ball caught in the legs of the defender. And this time India couldn't even finish!
6:33 AM2 months ago

6' stats at the moment

The ownership is even - literally, with 50% each. In the chances to get close to the goal, Argentina has entered the circle nine times, against five for India.
6:30 AM2 months ago

And in yet another free kick for Argentina, the Argentines equalize! In a quick move, the ball was sent in from the left and the shot came in strong, in the left corner, equalizing the match with Barrionuevo's goal!
6:23 AM2 months ago

Argentina now has a free kick! On a play from the left the ball caught the legs of the Indian player! The Indian defenders were able to close out the shot, which was blocked out!
6:21 AM2 months ago

And the second quarter begins, already with possession for India!
6:20 AM2 months ago

And in cards, there are three. Green is for something light and unsportsmanlike, almost a warning. The yellow is for medium fouls, with a temporary suspension. The red one, on the other hand, removes the player for the rest of the game.
6:20 AM2 months ago

At the moment two players hit their heads while attempting a move. Gorezlany from Argentina and an unidentified one from India. And that was the end of the first quarter! India goes on to win and qualify for the grand final!
6:17 AM2 months ago

The teams have 11 starters, with 11 starters and five reserves. And on the question of one of the main rules is penalty kicks. There is the penalty-corner, which is a short penalty. It is a free kick inside the attack, taken 10 meters from the goal, where only five defenders stand in front of the goal next to the goalkeeper. The penalty kick, on the other hand, is taken from 6.4 meters, with only the goalkeeper in front of the goal. Both penalties require one touch on the ball before the shot is taken.
6:16 AM2 months ago

Like in ice hockey, the players use sticks, which weigh between 350 and 700 grams. And the goalies are the only ones who can touch the ball with any part of their body.
6:16 AM2 months ago

Now with the game calmed down we can post some of the explanations of the rules: Since Field Hockey is not a sport with much fame, let's get down to some rules and measurements. It is a sport similar to soccer, being decided by goals and even cards.
6:10 AM2 months ago

Now Argentina has a free kick - I will explain more about the penalties in the game in a moment. But with Gorezlany, Argentina hit the mark and missed the chance for an equalizer!
6:09 AM2 months ago

Argentina did not release their starting lineup, but India did, who are fielding: 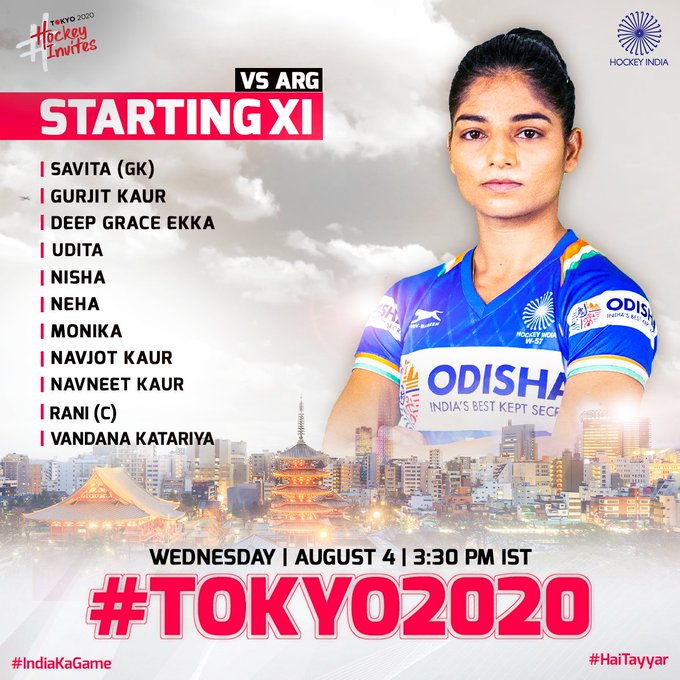 13' AND WE ALREADY HAVE A GOAL FOR INDIA!

And we have barely started on goal! On a free kick India opens the scoring early on with Gurjit!
6:05 AM2 months ago

We now begin the broadcast of the match between Argentina and India, in the semifinal of the Field Hockey tournament!

Do not miss a detail of the match with the live updates and commentaries of VAVEL. Follow along with us all the details, commentaries, analysis and lineups for this Argentina vs India match.
10:40 PM2 months ago

How to watch Argentina vs India Live in TV and Stream

If you want to directly stream it: Streaming services and NBCSports app.

The matches take place at the Oi Hockey Stadium, opened for the Olympics!
10:30 PM2 months ago

In Group A India went through in fourth place with six points, compared to nine for Great Britain, 12 for Germany, and 15 for the Netherlands, who went through undefeated.
10:15 PM2 months ago

Argentina finished third in group B with nine points, tied with Spain and six behind Australia, the group leader. The last spot went to New Zealand, who scored six points.
10:10 PM2 months ago

India opened the group stage by being thrashed by the Netherlands, who won 5-1. In the second match another defeat, this time by 2-0 to Germany. In the third round a 4-1 loss to Great Britain. In the penultimate round India beat Ireland 1-0, and in the last one they beat South Africa 4-3. In the quarterfinals India beat Australia 1-0.
10:05 PM2 months ago

Argentina started by being defeated 3-0 by New Zealand. In the second round they beat Spain 3-0. In the third round they managed a 3-2 win over China, and followed it up with another victory, this time over Japan, 2-1. In the last round a 2-0 defeat came against Australia. In the quarterfinals Argentina beat Germany 3-0.
10:00 PM2 months ago