Thank you for listening to this Handball match here on VAVEL. Have a good night and see you next time!
3:31 AMa month ago

The French are celebrating VERY hard for gold on the court!
3:28 AMa month ago

IT'S FINISHED! FRANCE IS OLYMPIC CHAMPION IN WOMEN'S HANDBALL!
3:27 AMa month ago

France is managing to keep the gap at six goals, but now takes two minutes off for an athlete and seven meters converted by Ilina! 28 to 23!
3:19 AMa month ago

ROC again had six at the line, when French went up, won a seven-meter and Pineau scored, making it 27-21!
3:16 AMa month ago

France gets six on the line again as ROC reaches the 20th goal. Now Makeeva draws a foul and gets two minutes. Seven meters beaten by Pineau, who makes it 25-20 for France!
3:14 AMa month ago

On Ilina's shot Darleaux came out in X and made a BEAUTIFUL save, saving France!
3:12 AMa month ago

Two minutes for Ugolin, for bringing down Ilina on the finish.
3:11 AMa month ago

France continues to maintain their six-point lead, now having 24-18 on the scoreboard, on another goal by Valentini!
3:08 AMa month ago

And right after that France is down one for two minutes. The score remains the same.
3:01 AMa month ago

For a hard foul, ROC is down a player for 2 minutes at the moment. France attacks and we have 16 to 14 for the French!
2:51 AMa month ago

And on the first chance of the match Deuna was held, earning a seven yarder, which Pineau made once again! 16-13 to France!
2:50 AMa month ago

The ball is already flying once again for the gold medal match, and it's off to the ROC!
2:47 AMa month ago

The players from ROC and France are on the court once again to start the second leg!
2:35 AMa month ago

The first half comes to an end with a short-lived 15-13 victory for France!
2:31 AMa month ago

ROC is back to having six players in the lineup as they take another goal. 14-11 to France!
2:29 AMa month ago

With 40 seconds left with one remaining, France earned a seven-meter on Flippes' finish, plus two minutes out for the ROC athlete. Pienau hit it over the goalkeeper, making a beautiful goal! 13 to 10 and France has six on the line once again!
2:27 AMa month ago

Deuna blocked a shot with a nasty foul and received two minutes for it. ROC with one up and suffering a 12-9 at the moment!
2:23 AMa month ago

Now a spectacular shot! France got the goal and right after that the ROC came out fast, sending it into the empty French goal. but Leynaud was inbound and he deflected it away! The play was practically repeated and ROC scored their ninth goal, conceding another soon after. 11 to 9 at the moment for France!
2:20 AMa month ago

Two quick runs and two goals. France in front with a 9-7! After that the French player was given two minutes off.
2:18 AMa month ago

Dmitrieva received in front of the defense and got the finish, turning the match around! We are 7 to 6 to ROC now.
2:15 AMa month ago

Now who had seven meters was ROC on a hold on Dmitrieva. Ilina hit it and brought the score down to 6-5!
2:13 AMa month ago

ROC went down and decreased, but France had another seven meters, converted by Pineau. 6 to 4 at the moment.
2:12 AMa month ago

Deuna attempted the finish and was held, earning a seven yarder. Pineau hit and made it. 5 to 3 for the French!
2:11 AMa month ago

Just as ROC gets back to having six players in the lineup, France scores the fourth goal and turns it to 4-3!
2:09 AMa month ago

Two minutes for the ROC athlete for a foul on Flippes' finish. In the seven meters Deuna did and tied the match 3-3!
2:06 AMa month ago

With two goals in a row, the last one being from Vyakhireva, ROC goes ahead and shoots up the scoreboard, now having a 3-1 lead!
2:04 AMa month ago

On Lassource's shot, another seven meters for France. that Pienau played into the legs of goalkeeper Kalinina! The match remains 1-1!
2:02 AMa month ago

The ball is already flying for ROC and France and we have a seven-meter already in the beginning, which Pineau scored, opening the score to France!
2:00 AMa month ago

Bojan Lah will be the referee for the match, assisted by David Sok.
1:56 AMa month ago

Now the national anthems of ROC and France are played.
1:55 AMa month ago

The players appear on the court to start the match!
1:41 AMa month ago

In the Bronze medal match, Norway scored a significant victory over Sweden with a 36-19 win!

The players warm up on the court for the gold medal match!
1:20 AMa month ago

The girls of France for the match! 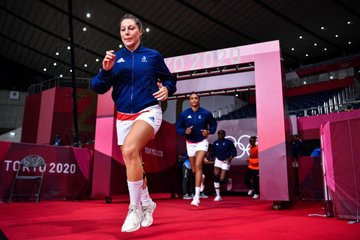 Now begins the broadcast of the women's handball gold medal match at the Olympics between ROC and France!
8:28 PMa month ago

Do not miss a detail of the match with the live updates and commentaries of VAVEL. Follow along with us all the details, commentaries, analysis and lineups for this ROC vs France match.
8:23 PMa month ago

How to watch ROC vs FranceLive in TV and Stream

If you want to directly stream it: Streaming services and NBC Olympics app.

Norway and Sweden will face each other at 10pm this Saturday in the bronze medal match!
8:13 PMa month ago

In the quarterfinals France faced the Netherlands and won comfortably, 32 to 22. In the semi-finals France beat Sweden, 29-27.
8:03 PMa month ago

In group B the qualified teams were Sweden and ROC, both with seven points, as well as France, with five points, and Hungary, with four points.
7:58 PMa month ago

In group A the qualified countries were Norway, which passed with 10 points, the Netherlands, with eight points, Montenegro, with four, and South Korea, which ended the group stage with three points.
7:53 PMa month ago

France, on the other hand, opened the group phase with a 20-29 victory over Hungary. In the second round they were beaten by Spain, 28-25. In the third round France drew 28-28 with Sweden and in the fourth came the defeat to ROC. Finally, France beat Brazil 29-22 in the last round.
7:48 PMa month ago

The Russians opened the group stage by drawing with Brazil 24-24. After that they were beaten by Sweden by 36 to 24. In the third round came the first victory, against Hungary, 38-31. Against France, Russia won 28-27 in the group phase, closing it with another victory, this time over Spain, 34-31.
7:43 PMa month ago

Welcome to VAVEL.com’s coverage of the 2020 Tokyo Olympics match: ROC vs FranceLive Score!