Thank you for following VAVEL's coverage of the fight between Oscar Valdez and Robson Conceicao. See you next time.
12:08 AM6 days ago

"We did what we had to do. It was a complicated fight, but I wanted the show for my fans and you can't win a fight by running," commented Mexican Oscar Valdez at the end of the fight.
12:06 AM6 days ago

They will go to the scorecards, where both boxers went in determined to win it by knockout, but in the end the Brazilian hugged and ran knowing he was the winner of the fight.
11:58 PM6 days ago

Double jab of Conceicao who in the last minutes has dominated the fight against a Valdez who looks desperate and at times begins to throw predictable punches that the Brazilian has removed them with ease.
11:54 PM6 days ago

Robson's left jab landed in Valdez's face and started the exchange of punches in the corner that did not favor the Brazilian all night long.
11:50 PM6 days ago

A point was taken away from the Brazilian for a blow to the back of the head and this could be key for the final scorecards. Valdez managed to connect with a right hand that hit the face and Robson has not been able to continue throwing his jabs.
11:45 PM6 days ago

Conceicao continues to mark his distance against a Valdez who is unable to get close and corner him on the ropes to be able to connect his punches that have benefited him so much throughout his career.
11:41 PM6 days ago

It was a close fight, but a left hook and a right hook that didn't go in quite right tipped the scales in favor of Oscar Valdez to win this round against Brazilian Robson Conceicao.
11:37 PM6 days ago

Valdez came out more determined, throwing punches where a couple of them did manage to be effective, but just like a dive by Conceicao that hit the Mexican in the left cheekbone.
11:33 PM6 days ago

Very erratic Óscar Valdez although he was finally able to connect a right hand that hurt. The Brazilian has not let himself be cornered and continues to maintain the strategy of his fight.
11:30 PM6 days ago

Nothing for anyone. Conceicao's jab continues to impose itself and Valdez's volleys fail to connect or do any damage to the Brazilian's humanity.
11:26 PM6 days ago

Valdez came out more determined and in the first seconds connected a right hand that hit the Brazilian in the face. Now the Mexican was the one who took command of the fight, which gradually faded before the right hands of the South American.
11:22 PM6 days ago

Jabs from both boxers, although Conceicao has had greater efficiency and power in his punches against a somewhat reserved Valdez.
11:19 PM6 days ago

Both fighters make their appearance in the ring; first the fighter from Bahia, Conceicao and then the current champion from Nogales, Oscar Valdez.
11:01 PM6 days ago

In this way Valdez and Conceicao closes his preparation to make his appearance in the ring.

Get to ESPN+ now for the #ValdezConceicao WBC 130-pound title scrap. pic.twitter.com/84k30KibeC

Team Canelo and especially Canelo Alvarez are present tonight to support their compatriot in his quest to retain the WBC world title.
10:52 PM6 days ago

The main fight of the night between Oscar Valdez and Robson Conceicao is coming from the United States.
10:43 PM6 days ago

This is how the winner was announced

Flores with a lot of heart went out to the ring and although he is not at 100 percent, he managed to withstand the blows of his rival.
10:32 PM6 days ago

Flores came out with more determination and determination in the ring, although in the final seconds he received a blow to the face that left him staggering.
10:28 PM6 days ago

Lopez is already conscientious of Flores, who looks static, with no certainty in his punches and is two rounds away from defeat.
10:24 PM6 days ago

Lopez threw a right hand that staggered Flores Jr, who miraculously stayed in the ring despite his staggering. At any moment, the Mexican could win by knockout.
10:21 PM6 days ago

Lopez keeps throwing punches that generate damage to a Flores that needs to give an accurate blow if he wants to take the fight, because in the cards he is down.
10:17 PM6 days ago

Lopez has continued to dominate the fight and Flores keeps trying, but has not found the distance to be able to generate damage.
10:14 PM6 days ago

The Mexican Lopez has landed some power punches in the first four rounds, where he appears to be dominating on the scorecards.
10:10 PM6 days ago

This is how Valdez weighed in

Oscar Valdez has already begun to be bandaged and prepared for one of the fights with a lot of controversy surrounding his doping that was presented a few weeks ago. 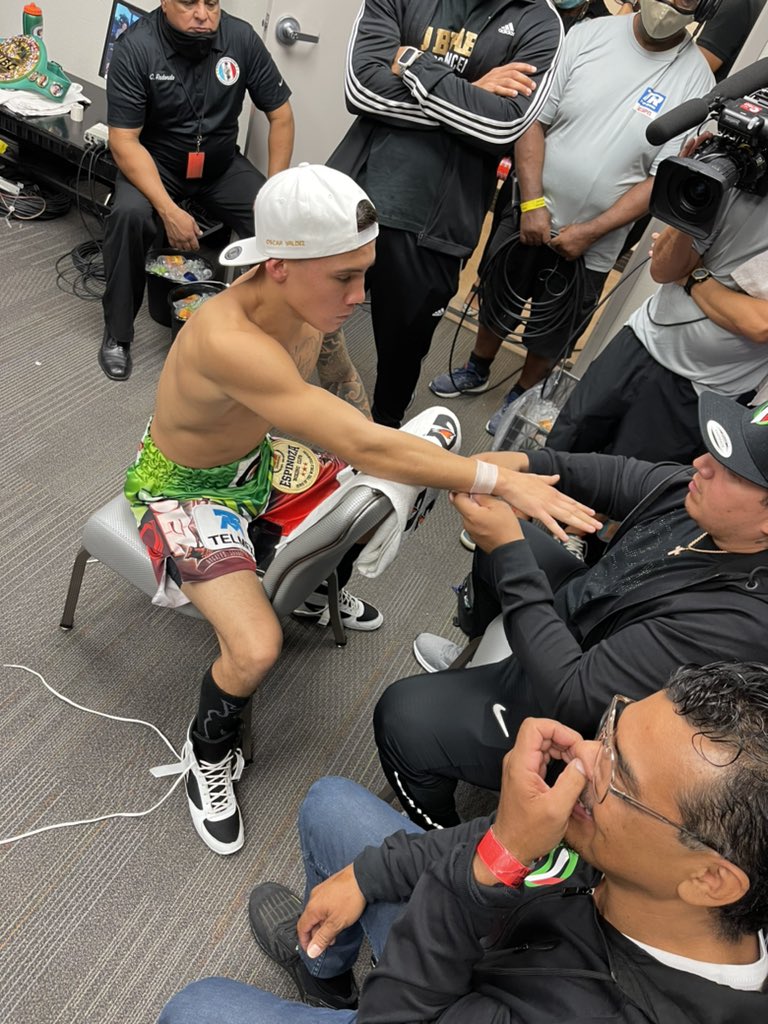 One of tonight's highly anticipated fights, Gabriel Flores vs Luis Lopez, is just minutes away and both fighters are already warming up.

Stockton’s King is up next 😤😤@G_Squad_Nation enters the ring in the co-feature to kick off the ESPN+ #ValdezConceicao main card at the top of the hour. pic.twitter.com/veNGIdk7s7

The arrival of the champion

About an hour ago, champion Valdez arrived in high spirits to retain his World Boxing Council super featherweight title.

Valdez has won 29 of his 29 fights, although he has only had two fights in the last year and a half because of the coronavirus. Those fights were against Puerto Rico's Velez and earlier this year against Berchelt.
9:47 PM6 days ago

What an impact Acosta received

The MASSIVE left hand from Junto Nakatani that got the blood flowing out of Acosta’s nose. 😬😬#ValdezConceicao | Undercard on ESPN+ pic.twitter.com/B5zEIz2Q0n — Top Rank Boxing (@trboxing) September 11, 2021

This is how it will come out

This is the outfit in which Oscar Valdez will step into the ring in order to end the undefeated record of former Olympian Conceicao. 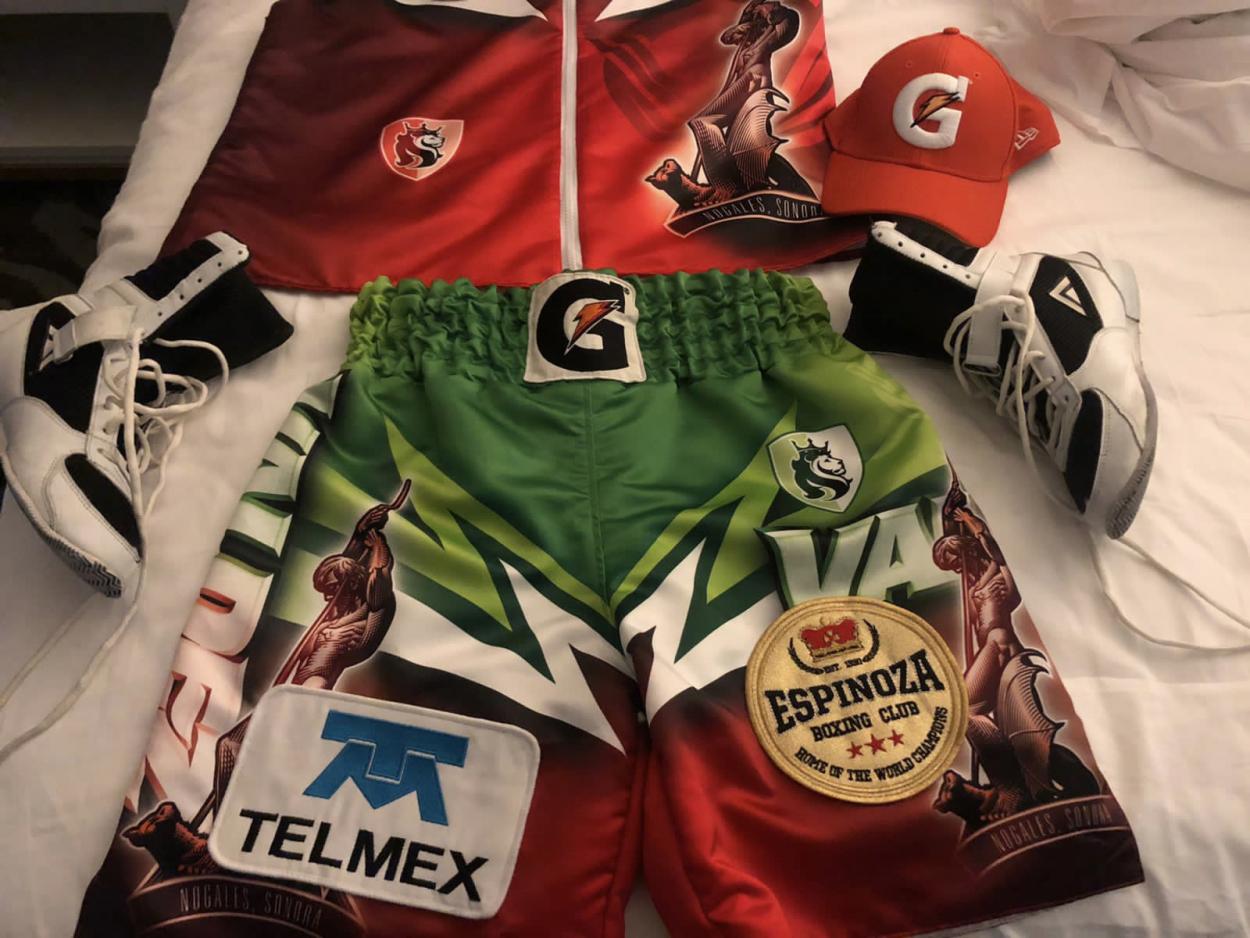 Mexican Óscar Valdez has arrived in Tucson with all the attitude he needs to seek his second victory of 2021. 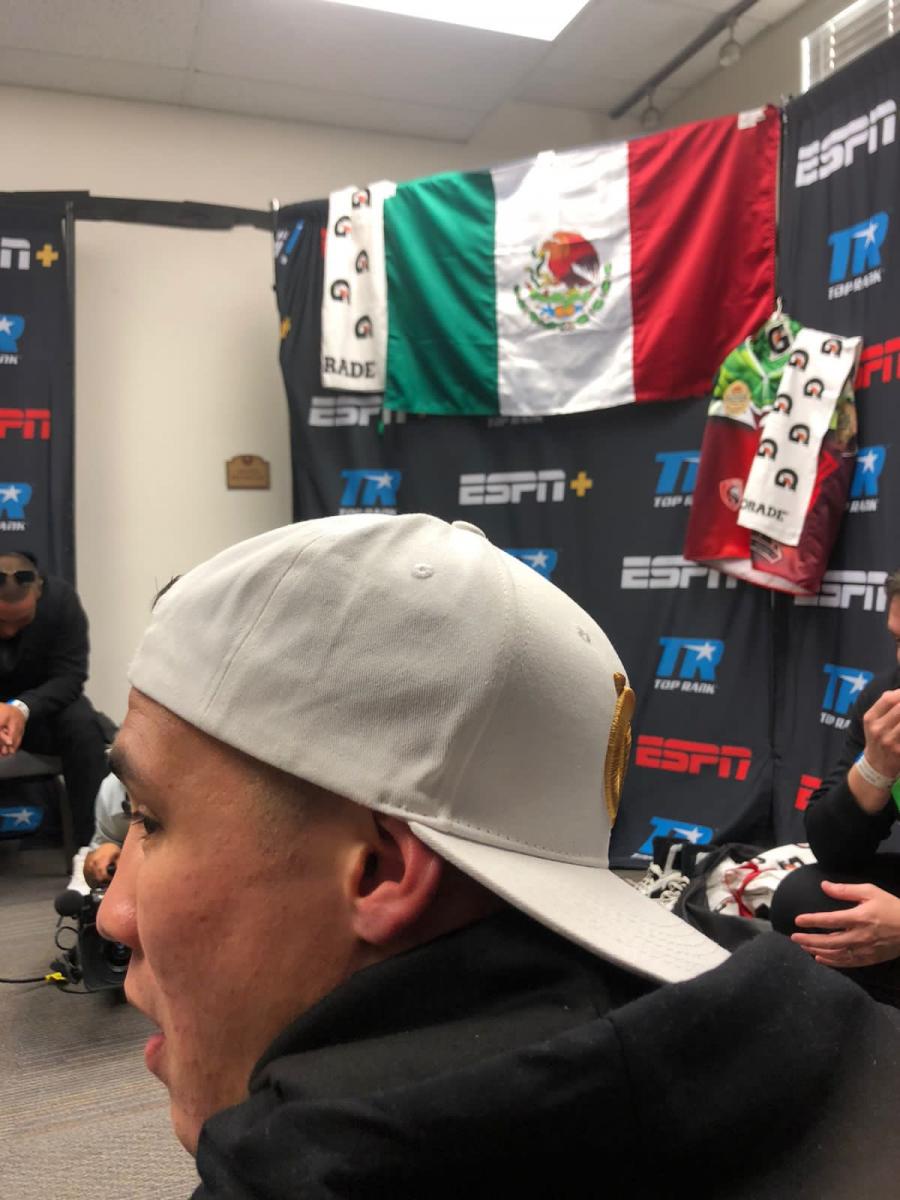 Oscar Valdez wants to shut mouths and tonight seeks to revalidate his world title against the also undefeated Brazilian Robson Conceicao. We begin.
9:27 PM6 days ago

Do not miss a detail of the match with the live updates and commentaries of VAVEL. Follow along with us all the details, commentaries, analysis and lineups for this Oscar Valdez vs Robson Conceicao fight in WBC.
9:22 PM6 days ago

What time is Oscar Valdez vs Robson Conceicao fight for WBC?

This is the start time of the game Oscar Valdez vs Robson Conceicao of 10th September in several countries:

The Brazilian since 2016 became a professional boxer and, since then, he remains undefeated with 16 wins, eight by knockout; his last fight happened last April 10 when he defeated Mexican Jesus Antonio Ahumada. 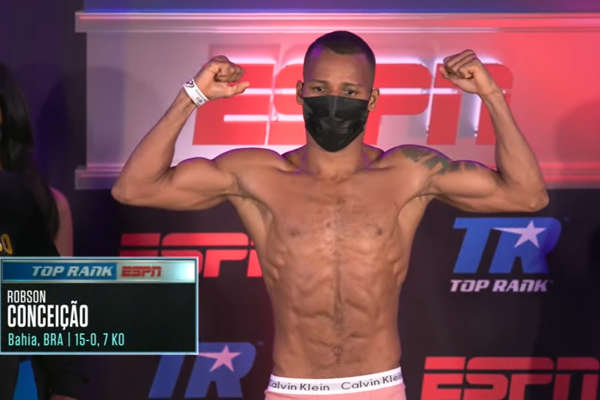 The Mexican has 29 wins in the same number of professional fights, 23 of them by knockout; he just defeated Miguel Berchelt by knockout and this will be his first defense of the WBC title.

The Brazilian Conceicao acknowledged that the first fight against Valdez, which was as an amateur, was very complicated, but he will give his best to prevail in the ring despite the fact that his opponent has the support of the fans.

"When I faced him (as an amateur on Mexican soil), it was a tough fight. I fought him and his fans, and it motivated me a lot and made me happy. Here we have the same thing. I'm going to battle two opponents, him and his fans, but I'll still be the winner," he stated.

About Valdez's positive, the South American did not want to get into controversy and assured that he will look for the victory anyway.

"About the champion's problem, what's done is done. There is no explanation, but I am here to give my best and fight the biggest fight of my life. I'm here for the Brazilian fans, for my family, my team, and we'll be great," he said.

After all the trouble he had, Valdez assured that he does not consider himself a cheater and that every achievement he has had in his career has been based on effort and sacrifice, although he admitted that it has hurt him to be labeled as a cheater.

"I am not a cheater. I never have been. I've never needed to be," Valdez said. "There's no easy way out for me, this is just hard work in the gym. Hours and hours of training. A lot of sacrifice. That's it. You come here, you train, you win fights in the gym. You go to a fight, you give it your best. That's who I am. And a lot of people say, "You're a cheater. You're using steroids. You came out positive. It just breaks my heart," he told ESPN.

Yes, there will be a fight

After the controversy that arose after Oscar Valdez tested positive for phentermine in the A and B tests, a banned substance; the doping commission indicated that there would be no sanction because it was not used in the fight and, in a reduced form, it does not help the boxer to increase his physical capabilities, although it indicated that the Mexican will have to undergo a series of tests and dynamics and will be under surveillance throughout the year to ensure that it does not happen again.
8:47 PM6 days ago

The Oscar Valdez vs Robson Conceicao fight will be played at the Tucson Sun Casino, in Arizona, United States. The kick-off is scheduled at 10:00 pm ET.
8:42 PM6 days ago

Welcome to VAVEL.com’s LIVE coverage of the 2021 fight: Oscar Valdez vs Robson Conceicao!