Do not miss a detail of the fight Joshua vs Usyk live updates and commentaries of VAVEL.
6:06 PMa month ago

How to watch Joshua vs Usyk Live Stream on TV and Online?

If you want to watch the game Joshua vs Usyk live on TV, your options is: DAZN.

If you want to directly stream it: Streaming services and DAZN app.

What time is Joshua vs Usyk fight for Box?

This is the start time of the fight Anthony Joshua vs Oleksandr Usyk of 25th September 2021 in several countries:

The bookmakers are leaning towards Joshua, taking into account that perhaps the locality will play in his favor, the surprise in the pairings will be for whoever decides to take the risk of choosing the challenger.
5:51 PMa month ago

On this occasion, the ball will not roll in the stadium. It will be a quadrilateral the protagonist this weekend and here are some facts to know about the enclosure

Tottenham Hotspur Stadium is a sports venue located in the city of London, England, United Kingdom. It is home to Tottenham Hotspur Football Club of the English Premier League. It was inaugurated in April 2019.

Built on the same site as its predecessor, White Hart Lane, it has a capacity of 62 062 spectators, making it the seventh largest stadium in the United Kingdom and the third largest in the Premier League, behind only Old Trafford and London's Olympic Stadium.

Anthony Joshua vs. Oleksandr Usyk, billed as The Perfect Storm, is an upcoming professional boxing match contested between WBA (Super), IBF, WBO, and IBO heavyweight champion, Anthony Joshua, and former undisputed cruiserweight champion and the WBO's heavyweight mandatory challenger, Oleksandr Usyk. The fight will take place on the Old Continent, at the Tottenham Hotspur Stadium, where Joshua will be local, even in the stands. 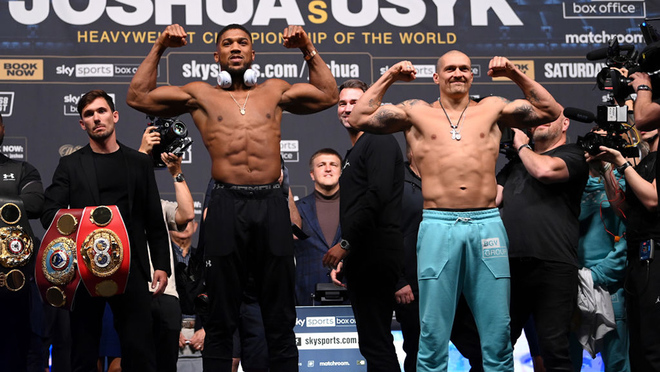 Anthony Oluwafemi Olaseni Joshua is a British professional boxer and a unified world heavyweight champion. He has successfully represented Britain at the Olympics, Commonwealth Games, and several other international sporting events. Initially a footballer and athlete, Joshua entered the boxing bandwagon only in his late teens. He slowly transformed from a troubled teenager to a heavyweight professional. His physical prowess ensured that he had an exemplary record and went undefeated during his amateur career. His bagged the gold medal at the 2012 London Olympics. His astonishing move up from the amateur ranks to world championships has earned him the status of a powerful puncher and a top-class opponent. Among the six heavyweight belts in the world, Joshua has successfully conquered four to his name and was the contender for the BBC sports personality of the year. He holds a reputation to fight in high-profiles matches with expensive stakes and drawing record breaking views and audiences.
5:36 PMa month ago

Ukrainian-born professional boxer Oleksandr Usykha has been reigning since July 2018 as the unrivaled cruiserweight champion, becoming the record holder as the first boxer to win all major cruiserweight championships. The four major titles include IBF and WBA (Unified) titles, the WBC title, which he won in January 2018 and the WBO title which has been his since 2016.

He is nicknamed The Cat for his speed and agility, a graduate in Physical Culture from Lviv State University.

Welcome to VAVEL.com’s coverage of the 2021 Boxing fight: Anthony Joshua vs Live Updates!