Penultimate episode . Fury ends the fight in the eleventh round with a brutal blow to the face of Deontay Wilder that leaves him without chances. The fight is over in the absence of the last agreed episode.
12:37 AM6 days ago

Wilder is knocked to the canvas by a right hand cross from the King of the Egyptians. Fury looks for the K.O.
12:34 AM6 days ago

Wilder is very affected and has a hard time hurting Fury but in the moments before the sound of the bell, 'The Bronze Bomber' tries to get into the fight and gets a combination that extends to the tenth chapter.
12:28 AM6 days ago

Left hook from Fury who wants to finish him in this episode. Deontay tries to get out of the way but Fury does not reduce the attack.
12:25 AM6 days ago

Tyson Fury takes the seventh round by directly impacting Wilder's jaw with a right hand. The American is staggering and does not look in good condition.
12:20 AM6 days ago

The fighters tie up again. Wilder decides to go to the ground to avoid Fury's knockdown, the left uppers of the English fighter begin to weigh Wilder down.
12:17 AM6 days ago

The tiredness of both boxers is beginning to show. Closed the episode although Deontay Wilder is perceived with blood in his mouth.
12:13 AM6 days ago

Wilder reacts and evens the fight with an upper that knocks Tyson Fury down twice. For the second knockdown, the British managed to rejoin in the seventh time of the count.
12:09 AM6 days ago

Although Wilder began the round by squeezing Tyson Fury on the ring, Gypsy King lands a combination that sends Deontay Wilder to the canvas. The bell 'saves' the American fighter who looks hurt.
12:04 AM6 days ago

Intense start of Tyson Fury releasing his right hand slowly. Wilder attacks with combination and pushes 'Gypsy King' against the ropes.
12:00 AM6 days ago

Wilder starts the first episode attacking Fury against the ropes, the Englishman manages to get out to the center of the ring. Wilder lands a right hand to the face of the Englishman.

Fury impacted the face of his opponent. Promising first episode of the 12 agreed upon.

King of the Gypsies

Tyson Fury makes his appearance with a show worthy of 'King of the Gypsies' with a Roman costume and accompanied by a group of 'Spartans' to the rhythm of the band ACDC.
11:29 PM7 days ago

The national anthems are played and the boxers prepare to make their entrance to the T-Mobile Arena stage.
11:16 PM7 days ago

This bout could be the last between these two fighters to end the rivalry, because although they share a draw and Fury has taken a win, the odds are also leaning towards Tyson on this occasion. Not long to go, everything is ready for the fight
11:11 PM7 days ago

Frank Sanchez wins by unanimous decision and remains undefeated in his career
11:06 PM7 days ago

Fight time is approaching, Ajagba and Sanchez fight their last round and shortly Fury and Wilder will step into the ring.
11:01 PM7 days ago

During the weigh-in, the 'face to face' did not take place due to the history of fights in which both fighters have argued during the ceremony, to the point that the intervention of the security corps has been necessary. 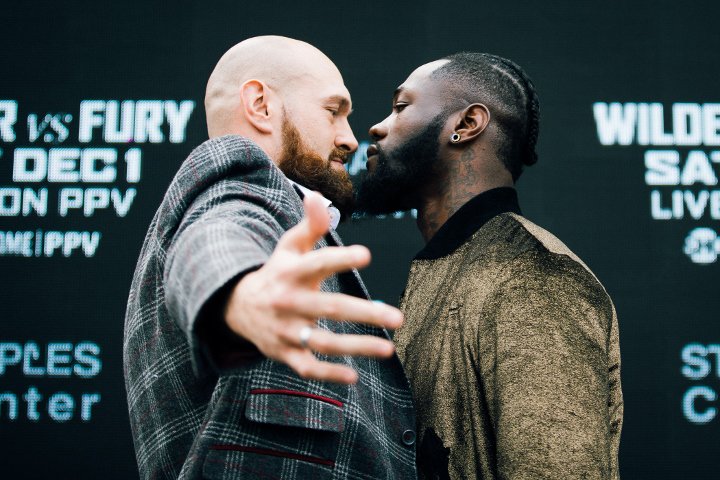 For his part, Tyson Fury marked 277 without showing his body, however, controversy has arisen due to rumors that the fighter is not physically at his peak.
10:51 PM7 days ago

Wilder surprises at the weigh-in

Deontay Wilder showed up at the weigh-in with a visibly bigger physique and hit the scales at 238 pounds.
10:46 PM7 days ago

Although the Fury vs. Wilder fight is tonight's headliner, these four fights complete the stellar card

These are the two fights that will take place before the main card of Fury vs Wilder.

These four bouts are scheduled as preliminary bouts for today's card

Do not miss a detail of the match Fury vs Wilder live updates and commentaries of VAVEL.
10:26 PM7 days ago

How to watch Fury vs Wilder Live Stream on TV and Online?

If you want to watch the fight Fury vs Wilder live on TV, your options is: ESPN.

What time is Fury vs Wilder fight for WBC?

This is the start time of the fight Fury vs Wilder of 9th October 2021 in several countries:

The T-Mobile Arena is a multi-purpose pavilion located in Las Vegas. Construction work began in 2014 and the pavilion was officially unveiled in April 2016. It has a capacity of 20,000 people

Deontay Leshun Wilder was born on October 22, 1985 in Tuscaloosa, Alabama, where he grew up. Wilder was a standout athlete growing up and hoped to have a career in basketball or soccer, two of the top sports in his home state.

He attended Tuscaloosa Central High School where he excelled in both sports. He had hoped to attend the University of Alabama to play either, but after the birth of his daughter and his poor academic performance in high school, he was only able to attend Shelton State Community College, during which time he began working toward a boxing career.

Deontay Wilder officially began his boxing training in 2005. He soon began fighting at the amateur level and was able to win two amateur boxing titles; the National Golden Gloves and the U.S. Championships. In 2007 he was successful in his attempt to represent the United States in the Summer Games where he earned a bronze medal after losing to Italy's Clemente Russo in the semi-final.

After the Olympics, Wilder, who had posted an amateur record of 30 wins and 5 losses turned professional.

In December 2012, after amassing a 25-0 record,Deontay Wilder was given his first title shot against the also undefeated Kelvin Price. Wilder knocked out Price to win the vacant WBC Continental Americas heavyweight title. He successfully defended the title twice before adding the WBC heavyweight title to his collection in January 2015 by defeating Bermane Stiverne by unanimous decision. Since then, Wilder has had to defend his title seven times, with his record, as of September 2018, has 40 wins and 0 losses.

In 2015, he defeated Wladimir Klitschko to become the unified IBF, IBO, WBO and WBA heavyweight champion. In 2020 he defeated Deontay Wilder to become the World Boxing Council champion. Controversy has not been something strange in his career as in 2016 he tested positive twice for cocaine. According to Sportingfree, Tyson Fury will pocket 30 million dollars insured.

Tyson Fury and Deontay Wilder will meet for the third time for the World Boxing Council heavyweight title, in the two previous fights the results lean to Fury, with a win and a draw. Tyson Fury will come into this bout with a record of 30-0-1 AND 21 KO'S.
9:56 PM7 days ago

Welcome to VAVEL.com’s coverage of the 2021 WBC fight: Fury vs Wilder Live Updates!

My name is Alejandra and I’ll be your host for this fight. We will provide you with pre-game analysis, score updates, and news as it happens live here on VAVEL