Thank you for following the rebroadcast of the fight between Errol Spence Jr and Yordenis Ugas. See you next time.
12:24 AMa month ago

This is how it ended

This was Ugas' eye, so the fight had to be stopped: 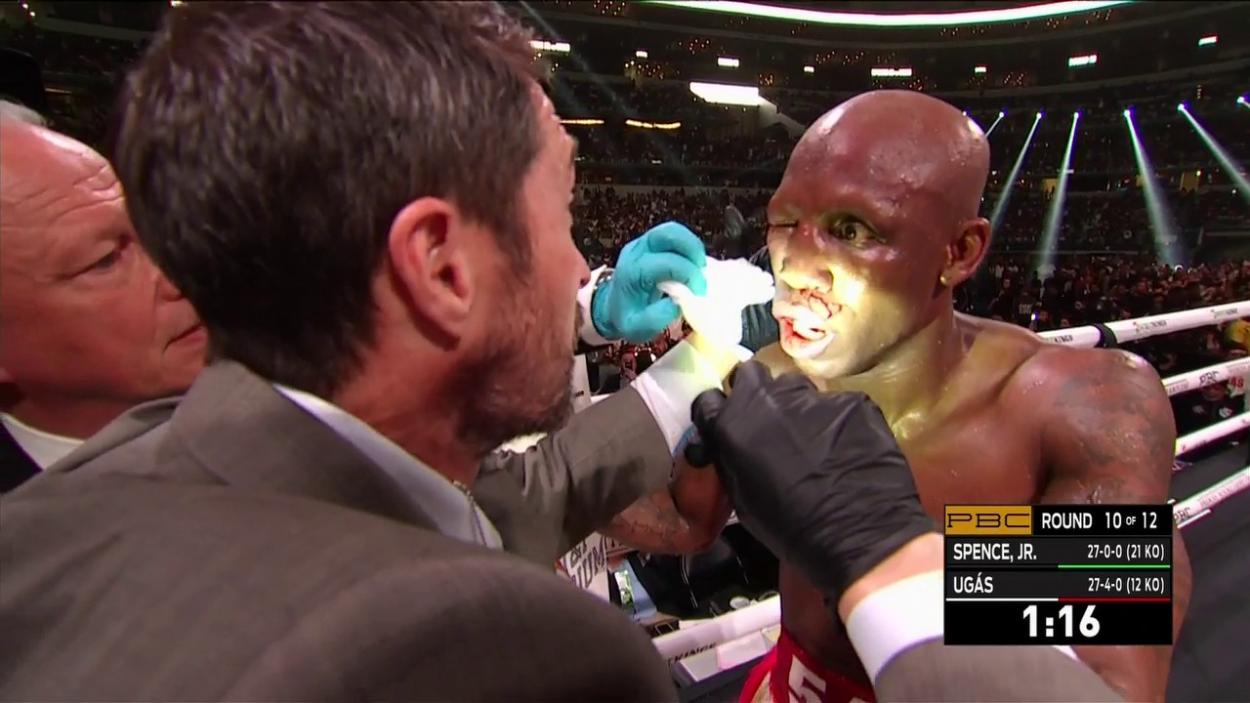 The doctor rechecks the eye of Yordenis Ugas and determines that he is no longer fit to continue despite the anger of the Cuban and Errol Spence Jr returned with a great version to take the victory.
12:14 AMa month ago

Ugas is trying to get those straights out to try to do damage, but Spence continues to be better and the Cuban's eye continues to get even more inflamed.
12:09 AMa month ago

Ugas can no longer find his way forward and is taking a lot of punches. The referee stopped the fight to check the Cuban's eye, so the doctor gave the approval for the fight to continue.
12:04 AMa month ago

Trouble for Ugas due to a swollen right eye and the fight is now tilted in favor of Spence who has not stopped working with his right hand opers which have already started to have an effect.
11:59 PMa month ago

A great right hand from Ugas that left Spence wobbling, who helped himself with the ropes to keep from falling. But the Cuban took the round.
11:54 PMa month ago

The distribution of blows begins to occur between both boxers, where Spence with the right continues to do damage and Ugas has answered it that is well, despite having less mobility.
11:49 PMa month ago

Now it is Ugas who, since late last round, has begun to unleash the right hand that has at times staggered Spence, who looks at times desperate to try to generate more damage.
11:44 PMa month ago

Little by little Spence manages to get loose and has connected power punches with the right, while Ugas hangs in there and lands power punches to the stomach, who has already been warned not to throw low blows.
11:39 PMa month ago

Ugas stood up well, but Spence showed more dynamism and a couple of punches managed to connect with the Cuban who remains highly concentrated.
11:34 PMa month ago

Spence's initiative was greater, but Ugas was well planted without giving space or opportunity to his opponent in a first episode of pure knowledge.
11:29 PMa month ago

Start of the fight between Errol Spence Jr and Yordenis Ugas.
11:24 PMa month ago

Who will retain the Welterweight titles?

They make their presentation

First Errol Spence Jr. and then Yordenis Ugas, but both fighters make their debut at AT&T Stadium to standing ovations from the crowd.
11:14 PMa month ago

Now, in a few minutes Errol Spence Jr. will return to the ring to face Cuban Yordenis Ugas from Texas. United States vs. Cuba for the WBA, WBC and IBF Welterweight titles.
11:09 PMa month ago

Ugas will dedicate this fight to all the people who fight every day to improve society, as he stated at a press conference:

In the fifth round the referee stopped the fight because he saw Gamboa in bad condition after falling twice to the canvas. Great win for the Mexican Cruz.
10:59 PMa month ago

Again the Mexican Cruz sent Gamboa to the canvas, who, as best he could, managed to get up to stay in the fight.
10:54 PMa month ago

Cruz sent Gamboa to the canvas in the second round and has been better in the first few minutes.

Cruz vs. Gamboa will be the next bout, but after that Ugas and Spence Jr. will appear on stage for the main event from Dallas.
10:44 PMa month ago

From champion to champion

El Canelo Alvarez held a video call with Isaac Cruz to wish him the best of success this Saturday in his fight:

Before the main event, Yuriorkis Gamboa, who is coming off two consecutive losses, will face Isaac Cruz.
10:29 PMa month ago

The Rayo Valenzuela in the first round and in the first few minutes sent a left straight to the face of Vargas, who was knocked out and the referee ended the fight in a spectacular knockout.
10:19 PMa month ago

With a lot of style

Cuban Yordenis Ugas arrived at AT&T Stadium with the mission of ending the opponent's undefeated streak.

Although he has not lost and is the favorite, one of the doubts is to see how Errol Spence's condition is after his last one was against Danny Garcia at the end of 2020, with which he will be looking to reach his 28th victory.
10:09 PMa month ago

The next bout will be marked by the Mexicans when Jose Valenzuela takes on compatriot Francisco Vargas in the ring. This will be the next event.
10:04 PMa month ago

On the card prior to this fight, Cody Crowley just defeated Josesito Lopez by unanimous decision without much trouble to add another important victory to his career.
9:59 PMa month ago

Errol Spence Jr.'s undefeated record is on the line when he faces Cuban Yordenis Ugas this Saturday. We begin with the coverage of the fight through VAVEL.
9:54 PMa month ago

Do not miss a detail of the match with the live updates and commentaries of VAVEL. Follow along with us all the details, commentaries, analysis and lineups for this Errol Spence Jr vs Yordenis Ugas match for the Boxing 2022.
9:49 PMa month ago

What time is Errol Spence Jr vs Yordenis Ugas match for Box 2022?

This is the start time of the game Errol Spence Jr vs Yordenis Ugas of April 16th in several countries:

Cuban Yordenis Ugas Hernandez already has 31 fights in his career and has 27 wins, 12 of which have been by knockout, although he has lost four times. His last fight was last August 21 where he defeated veteran Manny Pacquiao.
9:39 PMa month ago

The American Errol Spence Jr. has remained undefeated after 27 fights with the same number of victories, 21 of which have been by knockout; however, he has not stepped into a ring since 2020 when he defeated Danny Garcia, precisely in this same building.
9:34 PMa month ago

He wants to prove his favorite tag

In the bookmakers Spence is a 4.5 to 1 favorite, which is why the fighter expressed his desire to make it count in this way in the ring:

"It's clear that I'm going to win, but I'm definitely going for the knockout. I will be at home again, I hope to give a great demonstration to all my people," he said.

Yordenis Ugas is not the favorite to pull out the victory this Saturday, but he said he is confident and ready to do it to get the titles:

"I'm excited and ready to fight in front of a great fan base on Saturday night here in Dallas. Spence is a respectful fighter and we have nothing against each other outside of the ring, I'm just ready for action. I'm a competitor, I'm a warrior and I came to fight 12 rounds hard. That's the most important thing of all. That should only worry Spence," he said prior to the fight.

What titles are in contention?

This Saturday in Texas Errol Spende Jr and Yordenis Ugas will fight for the IBF, WBC and WBA titles, that is, three of the four major world titles in the welterweight division.
9:19 PMa month ago

The Errol Spence Jr vs Yordenis Ugas match will be played at the AT&T Stadium, in Dallas, United States. The kick-off is scheduled at 11:00 pm ET.
9:14 PMa month ago