Thank you for following the rebroadcast of the main event of the UFC Vegas 52 fight with Jessica Andrade's victory over Amanda Lemos. Until next time VAVEL friends.
10:53 PM25 days ago

At the end of the fight, Jessica Andrade could not hide her happiness for tonight's win in Las Vegas:

"I trained a lot this week and we knew that if I did the armbar grappling I was going to be close to victory. Thank you very much and I'm very happy for the win.

This is my category and I'm back, we know she is a great opponent," she commented.

That's the end of the fight

The strawweight division has been put on notice - @JessicaMMAPro is BACK! #UFCVegas52 pic.twitter.com/p9XNeovhqv — UFC (@ufc) April 24, 2022

Although Lemos had started better, Andrade's strength with his arms was brutal and by submission the referee had to stop the actions, so Andrade has taken the victory in a fast way, although not so surprising.
10:38 PM25 days ago

While now Amanda Lemos makes her presentation to seek victory against her compatriot.
10:33 PM25 days ago

Jessica Andrade with a plume on her head makes her appearance on the octagon.
10:28 PM25 days ago

Puelles had no major problems to get the win in the first round in this way:

Amanda Lemos' debut took place in July 2014 and she did it with the right foot by defeating her compatriot Laura Falcao by knockout.
10:13 PM25 days ago

Jessica Andrade's debut came in September 2011 when she defeated compatriot Weidy Borges in the second round by technical knockout.
10:08 PM25 days ago

Barber took the win over De la Rosa, mainly because of the good punches he threw:

Jessica Andrade's last defeat came last year when she lost to Kyrgyzstan's Valentina Shevchenko in the second round by knockout.
9:58 PM25 days ago

Last year Amanda Lemos defeated Mexican Montserrat Ruiz in the first round by way of punches, in the only victory she has over an Aztec in her career.
9:53 PM25 days ago

Amanda Lemos' only loss in her pro career came against Leslie Smith in 2017 when she lost by way of knockout via punches.
9:48 PM25 days ago

What a submission from Charles

In this way, Charles won a categorical victory a few moments ago.

Intense activity awaits us in the UFC when Brazil's Amanda Lemos and Jessica Andrade star in tonight's UFC Fight Night 205 headliner fight. We begin with VAVEL's coverage of the event.
9:38 PM25 days ago

Do not miss a detail of the match with the live updates and commentaries of VAVEL. Follow along with us all the details, commentaries, analysis and lineups for this Amanda Lemos vs Jessica Andrade match for the UFC Fight Night 2022.
9:33 PM25 days ago

What time is Amanda Lemos vs Jessica Andrade match for UFC Fight Night 2022?

This is the start time of the game Amanda Lemos vs Jessica Andrade of April 23rd in several countries:

Six bouts are scheduled for the main event, remembering that the last of them is five minutes in five periods, that is, with a maximum duration of 25 minutes: 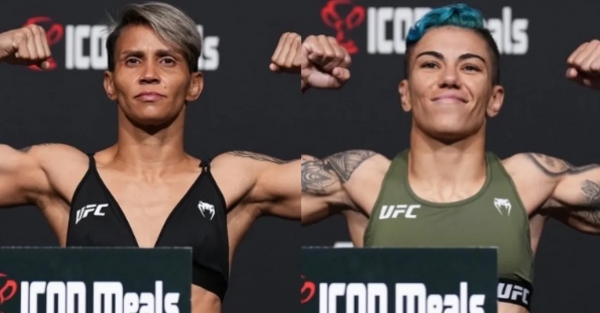 These are the preliminary fights for this UFC feature:

Bantamweight, Aori Qileng vs Cameron Else

While the also Brazilian "Bate Estaca" accumulates 22 victories, only 9 by knockout, but also has nine defeats. On September 25, 2021 was the last fight where she defeated the American Cynthia Calvillo at UFC 266.
9:13 PM25 days ago

She wants to finish them all

It should be recalled that for some years Amanda Lemos has expressed her desire to get stronger opponents and thus obtain the title, so she indicated a few months ago that she will not give up and that she would finish each of them if necessary to achieve her goal.
9:08 PM25 days ago

The Brazilian fighter debuted on July 17, 2014 and since then she has 11 victories, seven of them by knockout and only one defeat. The last fight was in December last year when she defeated Angela Hill by split decision.
9:03 PM25 days ago

The Amanda Lemos vs Jessica Andrade match will be played at the UFC Apex, in Nevada, United States. The kick-off is scheduled at 10:00 pm ET.
8:58 PM25 days ago