Thank you for following the telecast of Tyson Fury's knockout victory over Dillian Whyte for the WBC heavyweight title.
5:40 PMa month ago

This was the knockout

If Fury retires, he will have walked away as champion once again:

A MONSTER UPPERCUT FROM TYSON FURY ENDS THE FIGHT IN THE 6TH 😲#FuryWhyte pic.twitter.com/xtCnrBpoa2

Whyte with the volado and Fury takes off, so Dillian goes to the side and crashes in front of the ropes.

However, Fury pulled out the oper and sent Whyte to the canvas, who tried to get up but couldn't anymore and Fury retains the WBC championship. Great fight.

A couple of straight rights that Fury connects with Whyte and Wembley Stadium went wild in support of Tyson. Dillia still tied up with punches and hasn't connected on a power one.
5:20 PMa month ago

The referee had to stop the fight for a few seconds on two occasions due to the headbutts that both fighters gave each other, so he asked them not to do it anymore. Whyte's hooks began to be effective and the fight started in an incessant give and take.
5:15 PMa month ago

Whyte's moves were slow, but he didn't get hurt that badly, especially for an oper and recto on the backstretch that looked like they could carry more power.
5:10 PMa month ago

The two became more animated, where Fury unleashed a power punch that made everyone at Wembley tremble, but did not hit his opponent's humanity; while minutes later Whyte was more aggressive and put Tyson on the ropes, without getting anything out of it.
5:05 PMa month ago

Fury taking his distance in a full round of knowledge, where Fury managed to connect a right hand that Whyte answered in the same way. Very close round.
5:00 PMa month ago

This is what Wembley Stadium looks like right now: 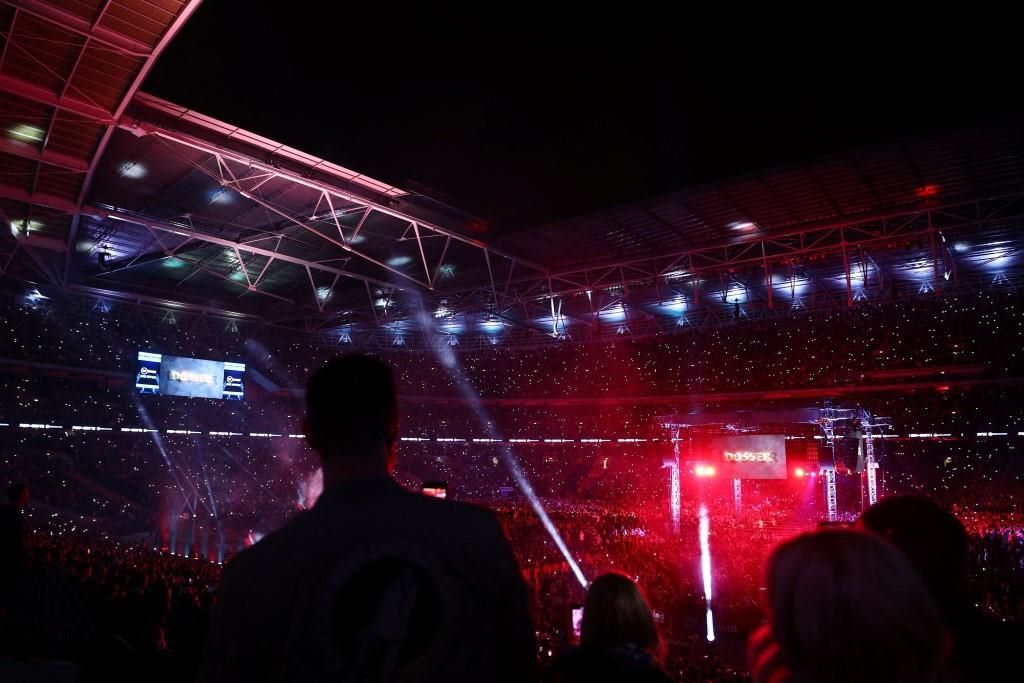 At this moment, both fighters are being introduced, as well as the referee and the judges who will be in charge of the fight.
4:50 PMa month ago

To the tune of American Pie and an emotional video, Tyson Fury makes his appearance at Wembley.
4:45 PMa month ago

Whyte, to the rhythm of ACDC and under the howl of a wolf, has made his appearance at Wembley Stadium.
4:40 PMa month ago

The fight between Whyte and Fury will be kicking off shortly.
4:35 PMa month ago

After 12 rounds of intense battle, Essuman wins by unanimous decision to defeat Tetley.
4:30 PMa month ago

Tyson Fury begins his preparation with minutes to go before he steps into the ring:

Right in the sixth round of 12, very even actions between Essuman and Tetley, remembering that after this fight the main event will take place:

A few hours ago the arena looked like this. Within minutes of the main event, Wembley Stadium is packed to see the Fury vs Whyte fight:

In for a good night of boxing @Tyson_Fury Gypsy King 🤴 #Wembley pic.twitter.com/ictZQYQ4wj

The penultimate fight of the night will be between Ekow Essuman and Darren Tetley, before the main event fight between Whyte and Fury.
4:10 PMa month ago

Tyson Fury is the favorite over Dillian Whyte to pull out the win, where betting odds indicate a knockout could fall between the sixth and ninth rounds. we'll see what happens this Saturday.
4:05 PMa month ago

Now yes, minutes away, Tyson Fury will be facing Dillian Whyte for the WBC heavyweight title.
4:00 PMa month ago

Nick Ball made a cut on Isaac Lowe, so the fight was already stopped once to check Lowe's eye, however, Ball did not want to leave any doubts and with an oper finished the fight to take the victory.
3:55 PMa month ago

Here are some of the things you need to know for the fight between these two Brits from Wembley Stadium: 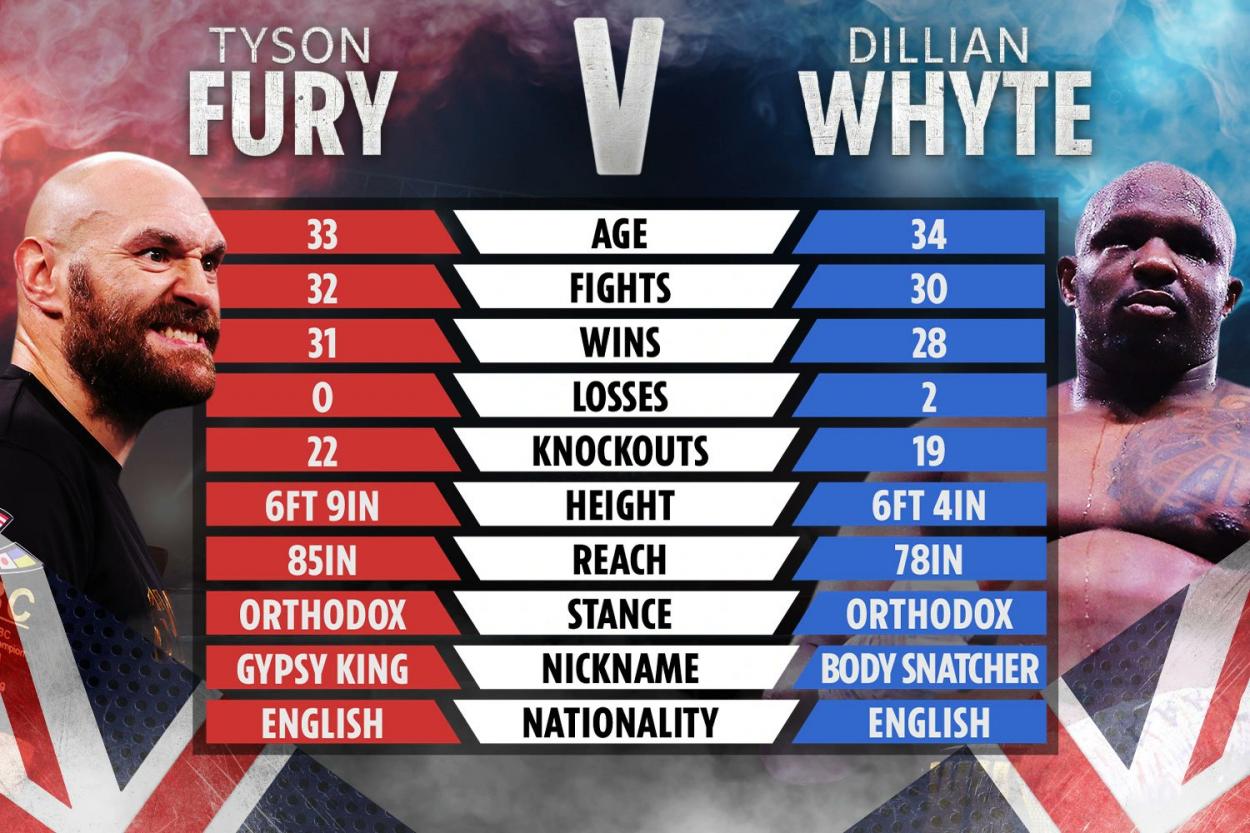 These were the last seconds of Adeleye's triumphant fight:

🥊 @DavidAdeleye secures the stoppage at Wembley

A few moments ago Whyte arrived at the mythical Wembley Stadium with the conviction to end the unbeaten run of the rival:

Next up is the featherweight co-feature fight when Isaac Lowe takes on Nick Ball.
3:35 PMa month ago

David Adeleye in the fourth episode, 51 seconds, connected a left to Chris Healey that hurt him and the referee had to stop the fight to give David the victory.
3:30 PMa month ago

In the fourth bout of the day, David Adeleye is taking on Chris Healey in an eight-round fight and everything remains even until the second period.
3:25 PMa month ago

It should be noted that Tyson Fury has not lost in his career as a professional, although he did draw and this was against the American Deontay Wilder (although he would later get a rematch), a fight that took place on December 1, 2018.
3:20 PMa month ago

Tommy Fury pulled out the win by unanimous decision and, upon finishing, indicated that he is a real boxer and challenged Jake Paul to a fight between them, where he promised he would finish him inside the ring.
3:15 PMa month ago

Right now the fight of Tyson Fury's brother, Tommy Fury, who is facing the Polish Daniel Bocianski, is taking place.

They are in the sixth and final round, but Fury has been clearly superior with his right hooks that have twice thrown the Pole, although he has managed to stay in the contest, however, in the cards the British will surely prevail.

Subsequently, Tyson Fury opened up a possibility of a possible fight against Ngannou, although Fury himself commented that he is not 100 percent sure it will happen.

"The fight with Ngannou is very possible," he said. "But that wouldn't be a boxing fight.... Or maybe it would. I don't know," he continued.

"It will be my last fight as an active professional. Heavyweight, but a special fight. I'm hopeful Ngannou (17-3) will still be interested."  (ESPN compilation).

When Tyson Fury was asked if he would fight either Joshua or Usyk, the British fighter replied that at the time he had the opportunity to fight them and it didn't happen for one reason or another, which is why he is calm about his career:

"Both Joshua and Usyk had their chance to face me in the past. I'm not going to wait for anyone. I'm not playing games. I am my own person and I do what I want to do. It's my last fight," he exclaimed.

A few hours before the fight against Whyte, Tyson Fury surprised with his statements because he questioned his continuity in boxing and could retire after the fight, mainly because he wants to retire as a champion and in full physical and psychological condition. Although his farewell from the ring is not yet a fact.

"I'm getting too old for this. I'm going to be 34 this year. I've been through several things, losing weight, going up and down, alcohol problems, drug problems. I'm close to 60 years old when you talk about boxing. Every dog has his day, whether you're the best or not. Age comes fast, so you have to give way to the young guys," he commented.

Tyson Fury wants to retain his World Boxing Council title against Dillian Whyte from the majestic Wembley Stadium. We start with the coverage of the fight through VAVEL.
2:45 PMa month ago

In a few moments we will share with you the opening details of the Tyson Fury vs Dillian Whyte live at Box 2022 fight, as well as the latest information coming out of Wembley Stadium. Don't miss any detail of the fight with VAVEL's minute-by-minute live online coverage.
2:40 PMa month ago

This is the start time of the Tyson Fury vs Dillian Whyted match on April 23 in several countries:

The British Whye said this week that all he wants is for Saturday to come so he can get in the ring and show what he is made of to take Fury's undefeated record away from him.

"Right now I just want violence to be honest. I just want the violence to start. I'm calm, I'm fine, but inside me there is rage and violence," he said. In addition to indicating that his opponent contradicts himself and claims to be the best when he has not yet faced him:

"Everything he says contradicts himself. Why do a 12-week 'Spartan training camp' for me? Then he says I'm a nobody and he's the best of all time, the new 2.06 Ali, Tyson, Frazier and Foreman all rolled into one. So why does he train so hard for me?" he finished.

While the "Villain" Dillian Whyte has fought 29 fights with a balance of 27 wins, 18 by knockout and only two defeats. The last fight was on March 27 where he defeated Russian Alexander Povetkin by technical knockout and has not lost since 2020 when he also faced Povetkin.

The British Tyson Fury has an impressive record with 32 fights, of which he has 31 wins, 22 by knockout, as well as a draw. His most recent fight took place on October 9, 2021 when he defeated American Deontay Wilder by KO in the eleventh ring to win the WBC title. His only draw was in 2018 precisely against Wilder.
2:20 PMa month ago

In total there will be eight fights that will rumble and vibrate the mythical Wembley Stadium, having as the main one Fury's fight against Whyte.

What titles are being contested?

This Saturday from England, Tyson Fury and Dillian Wyte will fight for the WBC heavyweight title.
2:10 PMa month ago

Good afternoon to all VAVEL readers! Welcome to the live broadcast of the Tyson Fury vs Dillian Whyte fight , corresponding to the Box. The bout will take place at Wembley Stadium in London, at 2:30 pm.