We thank you for your attention during the transmission of this event and invite you to stay connected with VAVEL.com.
10:58 AM17 days ago

THE UNDISPUTED CHAMPION OF THE DIVISION: SHAKUR STEVENSON

Shakur Stevenson takes the last round and shows all his potential. It will surely be a unanimous decision in favor of the American.
12:39 AM18 days ago

Valdez just defends and looks to counterpunch, but Stevenson doesn't let his defensive guard down. The American has great size and range in his punches.
12:38 AM18 days ago

Favorable round for Stevenson who seeks to finish everything with jabs and finishing combo with a long distance punch.
12:27 AM18 days ago

Valdéz opts for counter-attack and connects left jabs, Stevenson looks for the final blow, but does not succeed
12:24 AM18 days ago

The exchange of punches in this round was impressive. The power punches were crossed and it seems that Shakur's advantage now is not so great.
12:20 AM18 days ago

Oscar Valdez lands a combination of punches, but is exposed and Stevenson capitalizes on this. Shakur's defense is very good against the resurgent Mexican.
12:15 AM18 days ago

STEVENSON LANDED A POWERFUL RIGHT HOOK AND STAGGERED VALDEZ. GREAT ROUND FOR THE AMERICAN AND HE ALMOST FINISHED HIM BY KNOCKOUT.
12:12 AM18 days ago

Shakur Stevenson had a great round and even wobbled Valdez. The Mexican almost fell
12:08 AM18 days ago

The fight starts to get dirty and both fighters throw illegal, but unpunishable punches. Valdez starts to gain confidence and connects some big jabs and uppercuts.
12:04 AM18 days ago

Oscar Valdez resurfaces in the fight and gets a good third round but it will not be enough. Stevenson maintains the forcefulness in his attacks.
11:59 PM18 days ago

Another favorable round for Stevenson who keeps the distance with his punching. Valdez doesn't connect big punches and loses another round.
11:55 PM18 days ago

Shakur Stevenson dominates the action with short but effective jabs. Valdez defends and still not showing his power.
11:52 PM18 days ago

The bell rings and the bout that will unify the featherweight title begins.
11:34 PM18 days ago

ALL SET FOR VALDEZ VS. STEVENSON

The fighters get ready, the national anthems of Mexico and the United States are played and the main bout will begin shortly.
11:33 PM18 days ago

Davies won the bout after dominating much of it. In the end, the American showed why he was the favorite to win thanks to an unmistakable combination of hooks.
11:10 PM18 days ago

ALI WASH WON IN THE FIRST ROUND

Actually, the fight lasted only a breath. Ali Wash needed only one round to finish Ibarrá. A left hand defined the fight
11:08 PM18 days ago

This will be a four-round fight with middleweight representation.
11:06 PM18 days ago

Muratalla destroyed Hill and only needed three rounds to show his power. Great left hook that gave him the victory.
11:04 PM18 days ago

This fight will consist of eight rounds and will be part of the lightweight division.
11:03 PM18 days ago

From this moment on, the night's stellar line-up begins, which will end the evening with the bout between Oscar Valdez and Shakur Stevenson for the unification of the featherweight championship.
11:01 PM18 days ago

With a resounding KO thanks to his powerful right hand, Cortés finishes the fight against Del Bosque and defined it in five rounds.
10:57 PM18 days ago

This fight will close out the night's undercard. It will be an eight round super featherweight bout.
10:55 PM18 days ago

Troy Isley showed no mercy to Hannah and finished him off with powerful hooks and rights. In the end it was a KO in favor of Isley.
10:52 PM18 days ago

This fight will consist of six rounds and will be part of the middleweight division.
10:48 PM18 days ago

The American won a very quick victory over the Argentine Luciano Ramos. The judge was forced to stop the fight due to the blows that the South American had received.
10:42 PM18 days ago

This fight will have a total of 4 rounds and will be part of the lightweight division.
10:38 PM18 days ago

TIE BETWEEN COBB AND PHILLIPS

One judge declared victory for Phillips and two others a draw.

The first fight of the evening will begin between Antoine Cobb vs Jaylan Phillips.
9:40 PM18 days ago

The MGM Grand Arena is getting ready and will soon host one of the most anticipated fights in the boxing world.
2:55 PM18 days ago

The Central American and Caribbean champion

Óscar Valdéz is not giving up hope of becoming one of Mexico's historical references in boxing. With a gold medal won at the 2010 Central American and Caribbean Games and a silver medal won at the Pan American Games in 2011, Valdéz has the arguments to win yet another recognition and tell the world that he is the champion of the division.
2:50 PM18 days ago

Stevenson, from Olympian to professional

Shakur Stevenson participated in the Rio de Janeiro 2016 Olympic Games, where he won the silver medal for the 52 kg bantamweight. The 24-year-old boxer is known for his tenacity and incredible right hook. Today he can become the undisputed featherweight champion.
2:45 PM18 days ago

Tale of the tape 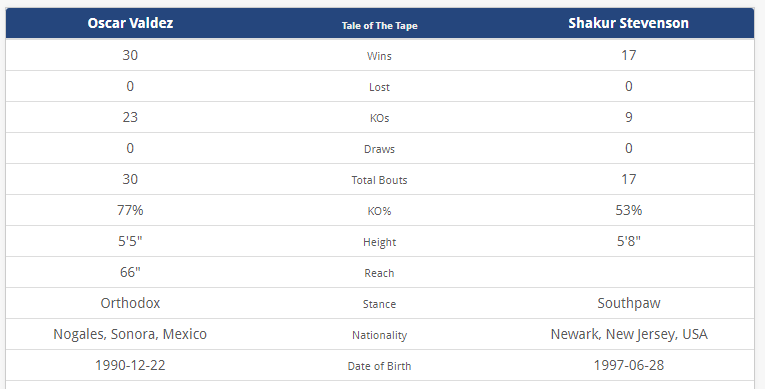 In a few moments we will share with you the details of the fight, as well as the latest information from the MGM Grand. Don't miss any detail of the fight with VAVEL.com's minute-by-minute live online coverage.
2:30 PM18 days ago

How to boxing event watch on TV and Online?

If you want to watch the boxing match live on TV, your options are: Space TV.

What time is the boxing match?

"The odds are against me, and everyone thinks he will walk all over me, but just like against Miguel Berchelt, I will use that as motivation. I know I have a tough fight in front of me, but it's not something I haven't done before."
2:15 PM18 days ago

"I think it's a fight that's going to take me to the next level. Right now, this is the Shakur Stevenson era, and I am Shakur Stevenson. I'm not Floyd Mayweather. Two different fighters, two different people, but I'm going to come in, perform and beat him."
2:10 PM18 days ago

Shakur Stevenson won the WBO world title in the super featherweight category after defeating Jamel Herring with a resounding knockout result for Stevenson.
2:05 PM18 days ago

Oscar Valdez comes into this fight after a controversial victory over Brazilian Robson Conseicao with a decision that was not very well received by many boxing critics. Against Stevenson he will have to show all his power in the ring.
2:00 PM18 days ago

Shakur Stevenson is a professional boxer with American nationality, but with Puerto Rican ancestry. This fighter has experience in the Olympic context and has 17 victories (9 by KO). With his track record of connecting rights, Stevenson wants to be the only and undisputed featherweight champion and to become it, he will have to beat Valdez.
1:55 PM18 days ago

Oscar Valdez comes into this fight with the great aspiration of winning one of the most important fights of his career. The Mexican currently has 30 wins (23 by KO) and hopes to reach his 24th knockout in the bout that unifies the featherweight titles.
1:50 PM18 days ago

The MGM Grand Las Vegas is a hotel-casino located on the Las Vegas Strip. It is owned and operated by the MGM Mirage Company. Its event pavilion is functional for all types of events, especially boxing and mixed martial arts. Boxing and the city of Las Vegas have a special mystique when they complement each other.
1:45 PM18 days ago

My name is Esteban Monsalve and I’ll be your host for this game. We will provide you with pre-game analysis, roster updates, and news as it happens live here on VAVEL.com