In a few moments we will share with you the opening moments of stage 18 of the Giro d'Italia 2022 live, as well as the latest information from the route between Borgo Valsugana y Treviso. Stay tuned to VAVEL's minute-by-minute coverage of the match.
9:20 PM4 hours ago

How to watch 2022 Giro d'Italia Stage 18 Live Stream on TV and Online?

If you want to watch the Stage 18 of the Giro d'Italia 2022 on TV, your option is beIN Sports

👕 Wearers of the maillots

Treviso is the capital of the Marca Trevigiana. Named the city of water because of the confluence of the Sile and the Botteniga, it is home to a series of resurgent springs that give rise to a dense network of streams and canals that penetrate and surround the city, shaping its topography. The ancient center, of Roman origin, is located on the left bank of the Sile and finds its heart in the Piazza dei Signori. Treviso has a rectangular shape, with narrow winding streets, presided over by houses with frescoed facades, porticoes and barbicans. Saved by the Huns, Treviso became an important commercial center in Roman times, only to be devastated by the Huns. It then became a coveted and flourishing center. It was ruled by the counts of Gorizia, the Scaligeri and Venice, Leopold of Austria, the Carraresi and the Visconti, before returning to the rule of the Serenissima. The link with Venice is evident in the city walls and gates. Between 1700 and 1800, Treviso was ruled by Austria, the Kingdom of Italy and Venice. Treviso suffered bombardments in both World War I and World War II. In particular, there is a day that is remembered with participation and suffering, April 7, 1944, the day when 159 allied bombers razed 80% of the buildings, causing at least 1,600 civilian casualties. Since that day, every year the painful event is remembered with a public ceremony. Treviso therefore combines history and elegance, tradition and passion. A city to visit for its frescoed palaces and the artistic wonders housed in the Civic Museums, but also for its taverns and places where Prosecco, cicchetti and traditional dishes reign supreme.
9:00 PM5 hours ago

The town is the only one in Trentino crossed by the Brenta River, and the classicism of the facades of the buildings along Corso Ausugum make it truly exclusive. The houses climb up the slopes of Mount Ciolino, where the castle of Telvana with its towers rises and, further down, the convent of the Poor Clares. The settlement extends along the sides of the old imperial road, while the new buildings expand towards the hamlet of Olle, which still retains the characteristics of a rural village. The medieval character of Borgo has remained almost intact in its urban layout: narrow streets, corridors and small courtyards characterize it alongside austere Renaissance and Baroque palaces.
8:55 PM5 hours ago 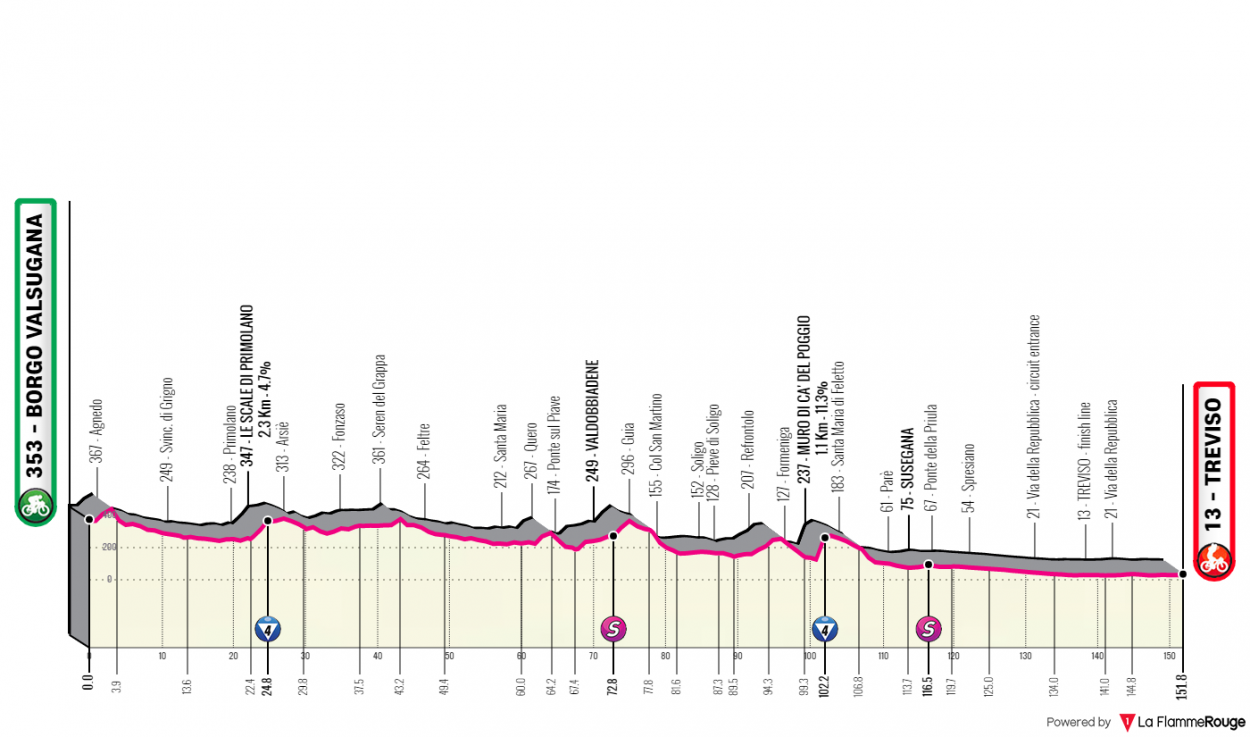 Route of the stage

Tomorrow is a quiet day, mostly flat and with a chance for the sprinters, who will have to give their best, as this is the last stage designed for a mass sprint.

There is only one small test that will demand the cyclists, it is a short but hard climb to Muro Di ca del Poggio, it is only 1.1 kilometers, but at 12.3%.

We will have two fourth category mountain passes, the first at 24.8 kilometers and the second at 102.2.

We will also have two intermediate sprints, the first at 72.8 kilometers and the second at 116.5 kilometers.

The final straight is essentially 2.6 kilometers long. This will serve to allow the team trains to settle in and launch their sprinters.

Here is the classification of stage 17 of the Giro d'Italia
8:35 PM5 hours ago

Summary and winner of the previous stage

Triumph 'cafetero' in this 17th stage of the Giro, where there was an early breakaway and remained until the end. There were 23 cyclists who went ahead in search of the stage, but in the end the group was reduced to 8 and then to 1, where Santiago Buitrago was the winner. Carapaz still has the same advantage over Hindley, who is only 3'' behind the Ecuadorian.

The victory of the Colombian Buitrago was very significant, because he endured the breakaway, then fell and reconnected the leading group.

He was able to take advantage of the mountain passes and in the last one was where he took advantage and managed to stay alone until the end, to take the stage.

Buitrago was moved to tears and it was the first victory for his team.

Welcome to VAVEL.com's coverage of stage 18 of the 2022 Giro d’Italia, between Borgo Valsugana and Treviso Live Updates

My name is Andrés Mesa and I will be your host for this stage. We'll be bringing you preview analysis, updates and live news here on VAVEL.