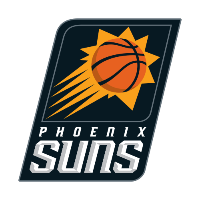 Final: That does it folks! Hope you enjoyed this Live event. Good night!

Final: The Lakers committed 23 turnovers which led to 24 points on the other end.

Final: The Suns sweep the Lakers for the first time since the 04-05 season.

4th Quarter (:16): Morris with the exclamation point, hits a three.

4th Quarter (1:00): Looks like the Suns have this one nipped and tucked.

4th Quarter (1:54): Another turnover by the Lakers which leads to a Markieff Morris tip in.

4th Quarter (2:17): Off a jump ball, Dragic controls it and runs the other way for an easy layup.

4th Quarter (5:00): Black is still down on the floor trying to slowly get up. He looks to be in a lot of pain. Could be the ankle. Timeout on the floor.

4th Quarter (5:07): Young hits another three, but Tarik Black is hurt badly on the other other.

4th Quarter (6:39): Young stops the bleeding for a moment, but Thomas answers with a three of his own.

4th Quarter (6:57): Marcus Morris drills a triple. This is getting out of hand.

4th Quarter (8:12): Black with a strong offensive rebound and left handed lay up.

4th Quarter (9:53): Thomas finishes around the rim again on a high arcing layup over the outstretched arms of Tarik Black.

4th Quarter (10:15): Clarkson with a sweet shot over the tough defense of Dragic.

​3rd Quarter (:26): Boozer drains a high arcing jumper, but Thomas answers by getting to the rim on the other end.

​3rd Quarter (:50): Bledsoe starting to take over this game.

​3rd Quarter (1:12): Bledsoe drains another three to give Suns their biggest lead of nine.

​3rd Quarter (1:38): Boozer gets to the basket and finishes with his left.

​3rd Quarter (2:02): Thomas tosses an alley-oop pass to Brandan Wright for the flush!

​3rd Quarter (3:03): The official gets in the way, and the Lakers turn it over again which leads to a Thomas lay up.

​3rd Quarter (3:58): Bledsoe with another steal and finish with a foul. The Lakers need to rushing the ball down the court. They need to slow down the pace and run their offense.

​3rd Quarter (4:36): Markieff Morris continues his fine play in this quarter, hits a mid-range jumper. But Johnson answers once again.

​3rd Quarter (4:52): Good entry pass by Johnson to Davis for another dunk.

​3rd Quarter (6:01): Tucker with a reverse layup off a good find by Dragic. Suns are more aggressive in this quarter.

​3rd Quarter (7:17): Morris with a beautiful find, passes to Tucker for an easy finish.

​3rd Quarter (8:55): But Johnson keeps firing back, as he knocks down another jumper. Then Lin steals it for a lay up.

​3rd Quarter (9:13): Once again, Bledsoe with the steal, Dragic with the finish.

Halftime: Isaiah Thomas is still hurting the Lakers, as he has 13 points.

​2nd Quarter (:29): Isaiah Thomas hits a three right out of the timeout to tie the game.

​2nd Quarter (:31): Lin picks up his third foul. Lakers cannot afford that. They are already shorthanded in the backcourt. Timeout on the floor.

​2nd Quarter (3:17): Bledsoe with the steal, Dragic with the finish on the other end. Good work by the Suns.

​2nd Quarter (8:00): Lakers are working hard on the boards, this time Young gets a tip in off a Kelly miss.

​2nd Quarter (8:36): Dragic with the righty layup after a Brandan Wright block.

​1st Quarter (3:30): There is Gerald Green who just came in and hits a three for the Suns.

​1st Quarter (4:01): Isaiah Thomas, the Lakers killer this season, is in the game as well.

​1st Quarter (5:20): Tarik Black and Jordan Clarkson already in the game for L.A.

​1st Quarter (6:20): Markieff Morris posts up the smaller Wayne Ellington and finishes with a short jumper.

​1st Quarter (6:56): Alex Len doing a nice job protecting the paint. He gets a rejection which leads to a layup and a foul for Dragic.

​1st Quarter (8:13): A Lakers turnover, and the Suns are off and running. Bledsoe takes it strong to the rim in transition.

​1st Quarter (11:44): Wesley Johnson hits the first shot of the game to get it going for the Lakers.

A little over 30 minutes remaining until this game tips off. 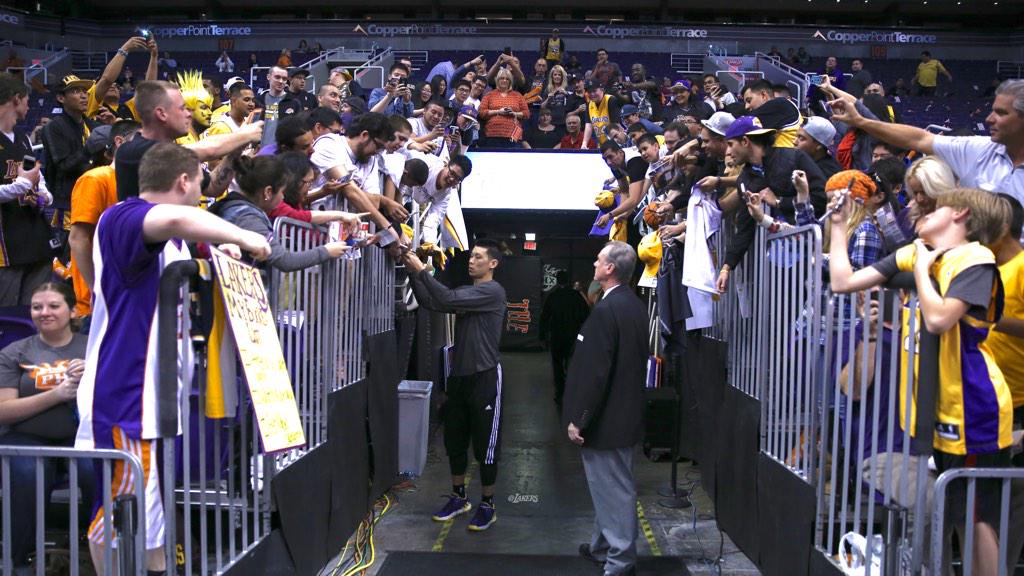 A lot of Lakers fans at the US Airways Center, as Lin signs a few autographs.

With Lin as a starter, Coach Scott is expecting a lot from his point guard. "He's got to get us into our offense a lot better, a lot quicker," Scott said.

Coach Byron Scott has talked about shutting down Kobe Bryant for the season possibly in March. This will be the eighth game that he will miss within a month.

As expected, Kobe Bryant (rest) and Ronnie Price (elbow) will not play tonight. Jeremy Lin and Wayne Ellington will get the start in their place.

This game will be the final game on a business 12-game Martin Luther King Jr. Day with four games, including this one, featured on national television.

At this point of the season, the Suns cannot afford any loses against inferior teams like the Lakers because one loss in the Western conference could be the difference between a trip to the playoffs or a trip to the draft lottery. Therefore, this is an important game, as they do not want to get complacent and lose their edge at the eighth spot. They will definitely need to take care of business.

The Phoenix Suns are completely healthy, as they have been for most of the season. The Los Angeles Lakers, as mentioned before, could be without Bryant. In addition, Ronnie Price, who missed the last game for the Lakers, is also considered doubtful to play due to an elbow injury. That leaves the Lakers depleted in their backcourt, as they will have to heavily rely on rookie Jordan Clarkson, who hasn't been too bad.

The Suns have won six of the last seven games against the Lakers, including a seven game winning streak against them at the US Airways Center. It's obvious that Phoenix has been dominating the Lakers over the past two seasons.

The Lakers are currently on a four-game road trip, as this is going to be their second stop. The Suns, on the other hand, are on an eight-game homestand, and this will be game number three of that homestand. The Lakers come in with a 6-14 away record, while the Suns own an 11-7 home record.

The Suns have been playing well after a slow start to the season. Goran Dragic has pulled himself out of an early season funk and is once again at the level he was last season, while his backcourt mate Eric Bledsoe is putting up incredible numbers across the board.

Meanwhile, the Suns are coming off two solid victories against the Minnesota Timberwolves and Cleveland Cavaliers. They are poised to hold on to that eighth seed, as they currently own a three-game lead over the Oklahoma City Thunder and New Orleans Pelicans.

The Lakers turned the ball over 21 times, 15 in the first half, against the Jazz in their last game. That was extremely uncharacteristic of them since they only averaged 12.7 turnovers a game which is fifth best in the league this season. They will certainly need to clean that up in this game.

Bryant has been rested seven times since December 23, as he was not with the team Friday night as well. Resting Bryant has become a regularity now. If he is indeed out, Wayne Ellington is expected to get the start once again.

Young has had a dreadful month, but it was good to see him find his stride against Utah. The Lakers, who are seventh in bench scoring, will be counting on Young's offensive production in this one since Kobe Bryant is doubtful to play.

Thomas's offensive firepower off the bench is what has the Suns number two in bench scoring at 43.4 points per game. Gerald Green is another streaky player off the bench, as he could put up huge scoring numbers on certain nights. To counter all that scoring, the Lakers have Nick Young, who finally came out of his slump Friday night against the Utah Jazz, scoring 23 points on 4 of 9 shooting from the field and 13 of 13 from the costless-throw line.

Isaiah Thomas has been a nightmare of a matchup for the Lakers. The 5-foot-9 point guard has been giving L.A. a lot of headaches with his ability to simply break down the defense and finish around the basket. He has averaged 20.0 points, 5.3 assists, and 2.0 steals per game against the Lakers this season.

The third meeting, which took place late last month, also came down to the wire. In that game, it was Markieff Morris who buried the Lakers with a seven-foot jumper that iced the game with 49 seconds left to play. Phoenix ended up winning, 116-107.

The Suns blew the Lakers out in the first meeting led by Isaiah Thomas's 23 points. Kobe Bryant scored 31 in that game, but it was not enough. The second meeting was much closer, as it went down to the wire. P.J. Tucker nailed a three-point basket late in the game which aided Phoenix to a 112-106 victory. Bryant poured in 39 points in that game in a losing effort.

This will be the fourth and final meeting between the two teams. The Suns took all three previous games, with two being played in Los Angeles and one in Phoenix.

Hello, everyone! Welcome to this Martin Luther King Jr. Day special of the Los Angeles Lakers versus Phoenix Suns at the US Airways Center in Phoenix, Arizona.