Big news has arrived for the Chicago Bulls this week. Bulls forward Mike Dunleavy is set to make his season debut against the Minnesota Timberwolves on Saturday. League sources have confirmed that this is the team's plan on their current road trip.

The plan for the forward is to make sure he does not suffer any problems between now and his set return date on Saturday. Dunleavy is planning to travel with the team to Denver as the Bulls play the Denver Nuggets on Friday. There is no chance Dunleavy will try to play on Friday but will stay active with the team as he eyes his return. If things do not go to plan he could be a game time decision against the Timberwolves.

The veteran is coming off of back surgery that has kept him sidelined from the whole season. He had originally hoped to return before the end of 2015 but suffered a few setbacks. He says his back feels fine and he is ready to go and help out his team. After his in-season rehab took a setback, Dunleavy took some rest and then got back into full-contact practices/workouts. Coach Fred Hoiberg has kept an eye out for his wing player and is excited to have him back with the team.

After an original plan to travel with the team for the whole seven game road trip, the Bulls changed their minds and made an interesting decision to send the forward to the NBA Development league for a few days. Dunleavy was assigned with the Santa Cruz Warriors, a D-league affiliate of the Golden State Warriors. He practiced for two days with the team and did not play in any games.

On Wednesday, Dunleavy then made the trip to Sacramento, California to be with his team on the bench as the Bulls took on the Sacramento Kings. Many fans were concerned the Bulls would lose a third straight game and be undermanned against the Kings as they were without their star player Jimmy Butler. The win was a big positive as it showed the bench players can step up and win games when it matters. With the addition of Dunleavy, the Bulls could see huge improvements on the offensive and defensive sides of the ball. The veteran is a great basketball mind that brings composure and leadership to a team that has struggled in late game moments. 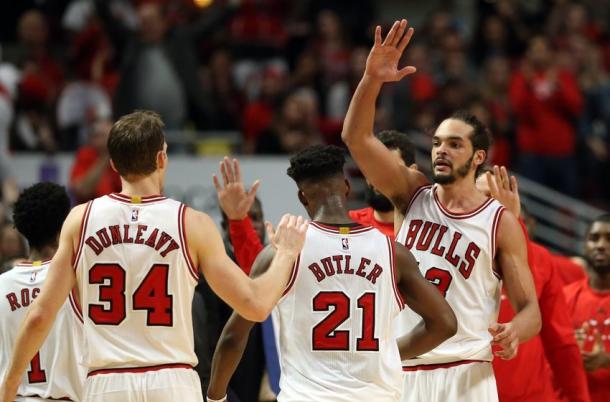 At 35, it is unclear how many years Dunleavy has left in the league. The veteran has not seen his productivity dip with the Bulls as he still had been effective before his injury. The forward was a significant help for the Bulls last season averaging 10.9 points, four rebounds and 2.6 assists in the Bulls' 12 postseason games. Dunleavy has averaged 11.7 points in 13 NBA seasons with Chicago, Milwaukee, Indiana and Golden State. With Nikola Mirotic and Joakim Noah out the Bulls need him now more than ever. He can add another threat from the outside as he is a confident three point shooter.

It is unclear whether Dunleavy will start off on the bench on Saturday but it is highly likely he will not start as he tries to get into the flow of things and shake the rust off. Expect him to get a low amount of minutes in his first few games back regardless.

Now at 27-21 on the season, the Bulls are an extremely tight race in the Eastern Conference as they hope to get a top seed come playoff time. Every game will count and Dunleavy could factor into be a big factor in the Bulls possible success moving forward.