It was a game that had it all. A blowout, a comeback and scorching hot shooting.

The Golden State Warriors jumped on the Toronto Raptors early and never looked back, emerging victorious, 121-111 at the Oracle.

The first quarter was dreadful for the Raptors, falling quickly behind by 25 points with barely any signs of life, down 42-17.

It wasn't until Terrence Ross and Kyle Lowry slowly managed to put them off life support. The Raptors cut their deficit to within five points in the second quarter but it didn't take long for Golden State to pull together another run, ending the quarter on a 14-2 run, up 72-55 at halftime.

Big ups to Ross, who was not fazed with the task at hand when checking into a blowout type first quarter. Ross added 24 points and 7 rebounds on 4-9 from deep in 33 minutes of action off the bench. He probably was the only Raptor player that looked presentable in the first half.

Toronto had no answers though for the Warriors and their shooting barrage, as they shot 56.8 percent from the field and a blazing hot 60.9 percent on 14-23 from deep on the night. The Raptors have had trouble in the past guarding the three point line and tonight was just another horrid reminder of their struggles.

The Raptors were resilient as Dwane Casey and company had no interest in bowing down, making it a contest late in the fourth quarter.

After trailing by as many as 17 in the fourth, the Raps somehow once again appeared within five, down 114-109 with just 3:01 left to play.

With several chances offensively late, the Raptors weren't able to capitalize, going 0-7 from the field in the final three minutes as Kevin Durant and the Warriors managed to hold on late for their 28th win of the season.

Durant had himself a night to remember, pouring in 22 points, 17 rebounds, 7 assists and 5 blocks. Durant looked nothing close to human tonight as he continued to make a valid case for the coveted MVP award.

DeMar DeRozan in the history books 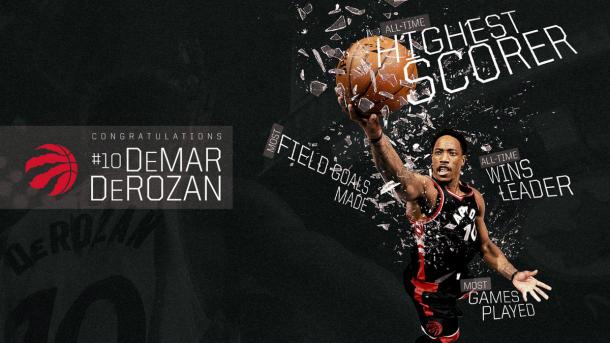 It was a long but anticipated night for DeMar DeRozan, who is now the franchise leader in points scored all-time, passing Chris Bosh. Only took him 552 games, but he did it. DeRozan holds the most field-goals made, games played, most wins and now all-time leader in points. Continuing to add to his resume, DeRozan is arguably the greatest Raptor of all-time, up there with none other than 'Air Canada' Vince Carter.

The Raptors are now 2-1 on their six-game road, heading to Arizona next to matchup with the Phoenix Suns on Thursday. After Thursday the Raptors will then face the Los Angeles Lakers on New Years and then wrap up their road trip in Texas against the San Antonio Spurs on Tuesday.

11 New Positive Tests In The League19 hours ago

Nurkic, Out 8 Weeks7 days ago

What's Going On With Kyrie Irving?8 days ago

James Harden; On His Way To Brooklyn9 days ago
Restore your password
Please enter your user name or email.
Login Member or Writer Panel
Enjoy your own Customized Newspaperwith VAVEL topics' carousels!