CAN2
END4 hours ago

Three-point marksmen are in high-demand in the NBA because they can fit seamlessly in an NBA offense. They don't need the ball to be effective because their mere presence on the perimeter requires defenses to bend (a term called "gravity").  Without Stephen Curry or Klay Thompson, the Washington Wizards' Davis Bertans has asserted himself as the player with perhaps the most "gravitational pull" in the league.

Currently, Davis Bertans leads the NBA in catch-and-shoot three-point attempts per game at 7.3. Out of the top-20 in that category, he is also tied for the 3rd highest three-point percentage at 46.7%. Here's the raw data of those top-20 along with a graph to illustrate how absurd Bertans has been. 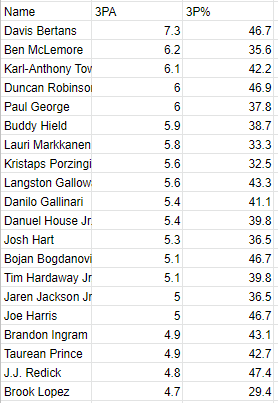 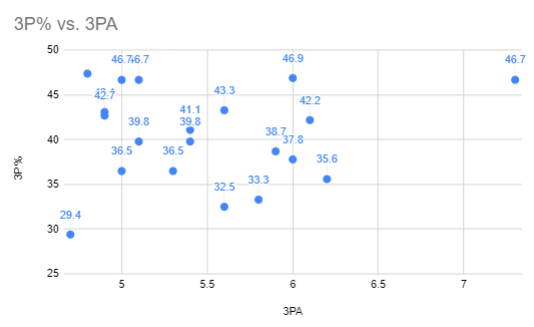 "Catch-and-shoot" can sometimes be misconstrued as "standing in the corner and waiting," but the most elite shooters like Bertans make a living off moving around. Here are a couple of examples of Bertans using a combination of off-ball screens and his own athletic cuts to get an open three.

We'll see how much this list changes over the next 60 games, but if Bertans keeps this up, it will be an all-time shooting season.