With an 18 point lead and 50 seconds left in the game at Madison Square Garden, Jae Crowder stole an inbounds pass from the New York Knicks and that's where it all started.

The Forward from the Memphis Grizzlies attempted a three pointer once the win was secured for the away squad, which for some of you who don't know, in the new NBA that is seen unsportsmanlike. A really heated Elfrid Payton pushed Crowder into the stands and both teams got into a scuffle.

The beef would not end up on the court, since after the game Marcus Morris addressed the New York media and said Crowder's game was soft, and ''very woman-like."

The Grizzlies player would respond on a tweet laughing at Morris' record with the team this season. 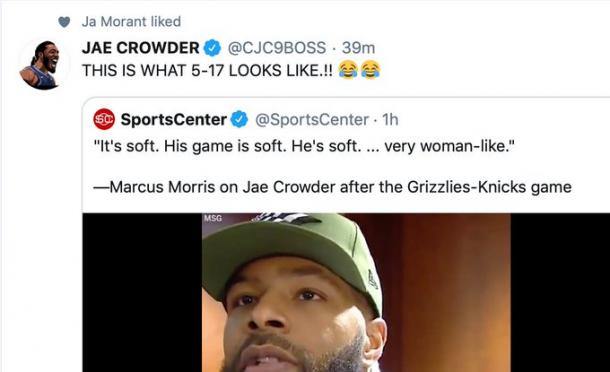 According to Kristian Winfield from the NY Daily News, there was no hot water and only 3 drops of water came out of the Knicks visitor showers. The Grizzlies actively tried to get both hot water and water pressure to take showers but couldn't.

Hollis-Jefferson Picked-Up By Minnesota 12 hours ago

Schroder Ready to Step Into A Bigger Role 14 hours ago

Jazz to Have Fans at Games Next Season 19 hours ago

Green Returns to Houston 20 hours ago