The Trail Blazers and Lakers faced off as one of the most anticipated games of the week. This was the first time the 'Purple & Gold' played since the tragic helicopter accident near Calabasas, California.

As expected, there was a huge ceremony prior to the start of the game, where players like Anthony Davis, LeBron James, Quinn Cook, among others, were visibly affected by Kobe Bryant's death. 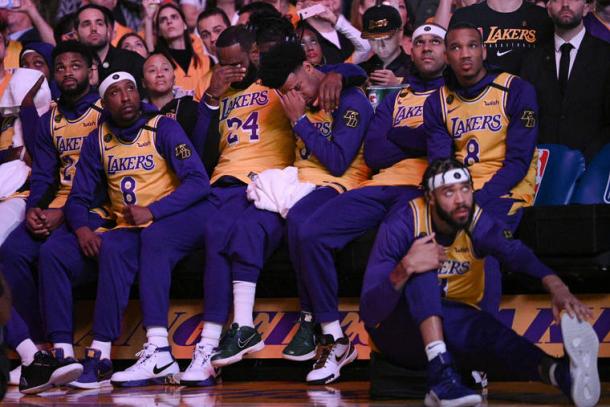 There were two moving and powerful video tributes, and R&B artists Usher and Boyz II Men, and cellist Ben Hong performed, followed by an emotional LeBron James addressing a crowd for the first time since Bryant's death.

'The King' had a script to read from but decided to throw it away once it was time for him to give his speech.

"I got something written down, they asked me to kind of stay on course or whatever the case may be," James said. "But Laker Nation, man, I would be selling y'all short if I read off this s--- so I'm going to go straight from the heart."

"Now I know at some point, we will have a memorial for Kobe," James said. "But I look at this as a celebration tonight. This is a celebration of the 20 years of the blood, the sweat, the tears, the broken-down body, the getting up, the sitting down, the everything. The countless hours, the determination to be as great as he could be. Tonight, we celebrate the kid that came here at 18 years of age, retired at 38 and became probably the best dad we've seen over the past three years, man.''

During halftime, Wiz Khalifa and Charlie Puth performed the emotional 'See You Again' song, which sealed one of the saddest nights in the history of sports.

Several players called this, 'the hardest game to play in their careers', just because of what it meant to play on this date.

Nice gesture by the Lakers organization to invite the teammates of Gianna Bryant, Alyssa Altobelli and Payton Chester, who were given courtside seats at the first Lakers game since their deaths.

Bol Gets Standard Contract From Denver 3 days ago