Since the beginning of the season Andre Iguodala announced he was not gonna step foot on an NBA court as a member of the Memphis Grizzlies.

With the trade deadline around the corner, it is still an incognite if the three-time NBA champion will be traded.

The young core of the Grizzlies seems to have had enough with the topic. It all started with Dillon Brooks, when he expressed his feelings about Iguodala's situation.

“I can't wait until we find a way to trade him so we can play him and show him really what Memphis is about.”

Ja Morant and DeAnthony Melton, agreed with him, and posted a tweet quoting the Grizzlies Forward.

Morant even liked a tweet from a Grizzlies fan, who was throwing shade at the 36yo vet. 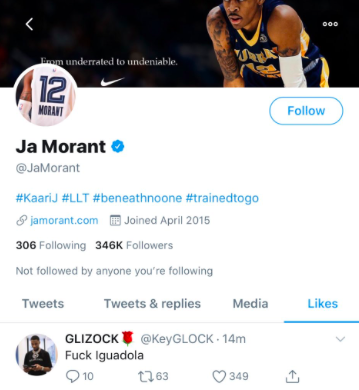 The Grizzlies have proved everyone wrong this season. Taylor Jenkins' squad are currently inside the top 8 teams in the West, led by the rookie Ja Morant, who is averaging 17.5 points and 7.1 assists per game.

2021 All-Star Weekend, Postponed an hour ago

Ingram Gets Max-Extension a day ago

Bol Gets Standard Contract From Denver a day ago

Tacko Fall Signs Two-Way Deal With Boston a day ago

No Fans at Bucks Games Next Season 2 days ago