Thank you for following the Nets vs Warriors game, continue on VAVEL with everything we can offer you.

The game of the day concludes at the Barclays Center

The Warriors get the victory with a great Curry who led his team with 37 points.

The best for the Nets was James Harden with 24 points.

Last two minutes of a one-half game, the Warriors dominated from the third quarter on and will remain the best team in the NBA with a record of 12 wins and 2 losses.
9:51 PM21 days ago

Both teams begin to bring out their bench players to give them minutes, the game is decided.
9:47 PM21 days ago

The game has gone to the visitors, who will win the game and reach their 12th victory of the season.
9:44 PM21 days ago

Stephen Curry has 34 points, 7 rebounds and 5 assists in another fantastic night for the Ohio native
9:38 PM21 days ago

Start of the last quarter

The final quarter of the game begins and the Warriors continue to hold a 20-point lead.
9:28 PM21 days ago

Great job by the Warriors who won the third quarter 35-18.

Steve Nash must look for options to win this NBA game

The offensive work of Steve Kerr's team is fantastic, but their defense, led by Green, is among the best in the league and they proved it against the Nets.
9:19 PM21 days ago

A third quarter completely dominated by the visitors who, using their long distance shooting and great defense, kept the Nets at a distance.
9:12 PM21 days ago

Critical situation for the local team that did not start the second half in the best way.

On the other hand, Curry already has 4 personal fouls and must be careful not to get sent off.

Curry scores 25 points midway through the game and is the game's leading scorer.

A serial contender to be the MVP of the season.

The visitors started the second half in a better way and managed to take a small lead.
8:55 PM21 days ago

Second half of a great NBA game begins
8:54 PM21 days ago

Warriors get the lead halfway through the game with an ornery Wiggins with 12 points in the second quarter.

The best is yet to come

A one-basket game that will surely be decided on the last shot of the fourth quarter.

A great matchup in Brookly gives us the Nets and Warriors.

The visitors take the lead and Steve Nash begins to move his bench to regain the advantage.
8:22 PM21 days ago

Midway through the second quarter and Golden State begins to close in with its mid- and long-range shooting, but the Nets don't give up.
8:15 PM21 days ago

The points leaders in the game are Durant and Curry with 12 each.

The big stars are present in the game

With its inside game and penetrations, the home team maintains a slight advantage in the game but everything is still open on the court.
8:06 PM21 days ago

Action resumes in Brooklyn between two of the NBA's best record-breakers
8:00 PM21 days ago

Brooklyn leaves with a slim lead at the end of the first 12 minutes, but the game promises to be a war
7:52 PM21 days ago

Both teams show us that this could be an early finale. Nets still lead by just one possession over the Warriors.
7:50 PM21 days ago

Kevin Durant leads the game in points with 7, followed by Curry with 6 and Griffin with 4.
7:43 PM21 days ago

The game is still very even at the Barclays Center with the Nets looking for more in the paint and the Warriors looking for long distance.
7:40 PM21 days ago

Nets start to pull away with great offensive work from Durant, Warriors won't have an easy night
7:37 PM21 days ago

Very close game at the beginning with a small difference in favor of the Nets.
7:33 PM21 days ago

The ball is already flying at the Barclays Center as the Nets host the Warriors.
7:15 PM21 days ago

All set for the game of the day

Nets and Warriors face each other in the best game of the day in the NBA and you can follow it on VAVEL to know all the actions of the game. 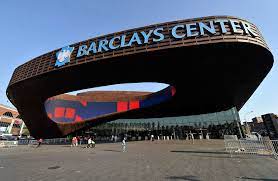 Upcoming games for the Warriors

After visiting Brooklyn, the Warriors will travel to Cleveland and Detroit, hosting the Raptors on Sunday and the 76ers on Wednesday.
7:06 PM21 days ago

Upcoming games for the Nets

After facing the Warrios, the Brooklyn team will host the Cavaliers and the Magic tomorrow, before visiting Cleveland and going to Boston.
6:54 PM21 days ago

James Harden and the eternal beard

Another of the leaders in the Bay Area team is Green, as his numbers of 8.2 points, 8.1 rebounds and 7.1 assists per game show the need to have him on the court for the Warriors.
6:36 PM21 days ago

The Barclays Center, home of the Nets.

Warriors with a great start to the season

Last game for the home team

The Brooklyn team comes into the game after a 120-96 away win over the Thunder, which moved them into third place in the Eastern Conference with a 10-4 record.
6:21 PM21 days ago

Do not miss a detail of the match with the live updates and commentaries of VAVEL. Follow along with us all the details, commentaries, analysis and lineups for this Brooklyn Nets vs Golden State Warriors match in NBA 2021.

What time is Brooklyn Nets vs Golden State Warriors match for NBA?

This is the start time of the game Brooklyn Nets vs Golden State Warriors of 16th November in several countries:

Watch out for this Golden State Warriors player

The great leader and figurehead of these revolutionized Warriors is undoubtedly Stephen Curry. Born in Akron, Ohio, Curry is once again the face of the franchise averaging 28.1 points per game, 6.2 rebounds and 6.7 assists per game.
6:06 PM21 days ago

Watch out for this Brooklyn Nets player

Although the Nets have a great team and very good stars, the one who stands out and leads the draft is Kevin Durant. The former NBA champion with the Warriors averages 29.6 points per game, 8.4 rebounds and 5.1 assists per game.
6:01 PM21 days ago

Warriors to maintain their lead in the West

With 11 wins in 13 games, Golden State wants to get back to winning ways after an unexpected 106-102 loss to the Hornets as visitors in Charlotte.
5:46 PM21 days ago

With 3 consecutive victories against the Magic, Pelicans and Thunder, Brooklyn will try to keep the good pace against a contender and keep showing why Steve Nash's team is the main candidate for the NBA title.
5:41 PM21 days ago

Meeting that could be an early final

At the Barclays Center in Brooklyn, two of the main contenders for the league championship will meet, as the duel is between the number 2 of the Eastern Conference and the leader of the Wild West.
5:36 PM21 days ago

Two of the best teams in the league meet in Brooklyn this afternoon when the Kevin Durant-led Nets host the Warriors, who dominate the Western Conference with Stephen Curry as their star player.
5:31 PM21 days ago