Stay tuned to VAVEL for everything we have to offer.

The game ends in Dallas.

After being down on the scoreboard for three and a half quarters, the Brooklyn Nets take the victory and remain as the best team in the East.

Great game tonight that will be decided on the last shot.

The Nets win it by only 1 point.

The game is tied at 95 and the best players of each team begin to take the most important shots of the game.
9:35 PMa month ago

Nerves begin to show in the Dallas arena as the final minutes of the quarter tick away.

Nets for the first time in the game take the lead.

They cut the Brooklyn Nets lead with 2 3-point shots.

The game is a one possession game.

Luka Dončić has 22 units while Kristaps Porzingis has 15 in the game.
9:21 PMa month ago

Third quarter ends with the Dallas lead after a great 10 minutes on offense and defense.
9:07 PMa month ago

Kevin Durant with 13 and James Harden with 12 start to lead his team to tie the score and look for the victory in the last quarter.
9:04 PMa month ago

Nets can't tie the game and Mavs manage to hold on to double-digit lead
8:59 PMa month ago

Nets' good run puts them 12 points behind again in the game
8:51 PMa month ago

Kristaps Porzingis completely dominates the rebounding department with 9 rebounds for the entire game.
8:48 PMa month ago

Dallas maintains the gap in this early fourth quarter, although the two teams are not yet in rhythm
8:45 PMa month ago

The action resumes at the American Airlines Center with the partial victory of the home team.
8:28 PMa month ago

Mavericks close out a big first half with a 12-point lead over the Nets.

The home defense has held Durant and Harden to less than 10 points.

LaMarcus Aldridge has 9 points and is his team's leading scorer, a bad first half for Durant and Harden
8:13 PMa month ago

Dallas manages to keep the lead in the game, its best scorer is Dorian Finney-Smith with 9 points.
8:04 PMa month ago

Dallas Mavericks squeeze and build a 10-point lead in the scoreboard
8:02 PMa month ago

Starting the second twelve minutes at the American Airlines Center, the Mavs begin with a partial lead.
7:56 PMa month ago

First quarter ends in Dallas, Mavericks get a good lead to close the first twelve minutes in their favor.
7:53 PMa month ago

The visitors tie the score after scoring 7 unanswered points, Kevin Durant starts to be a factor.
7:48 PMa month ago

First changes in the game, the Nets look to tie the game but Dallas' mid-range shooting doesn't allow for it
7:41 PMa month ago

Midway through the first quarter and James Harden is still scoreless for his team, Kevin Durant has only 2.
7:39 PMa month ago

Brooklyn's inside game takes effect and they get closer on the scoreboard, although the home team continues to win.
7:36 PMa month ago

Perfect first two minutes for the home team, which started the game with a good run of points.
7:33 PMa month ago

Game kicks off in Dallas as the Mavericks host the Nets in a power-to-power matchup.
7:07 PMa month ago

Everything is ready in Dallas, Texas for today's game.

The Dallas Mavericks are ready to welcome one of the best teams in the league at home.

The setting for tonight's battle

The battle will be fought at the American Airlines Center in Dallas, Texas. It has a capacity of 19,200 spectators and was opened on July 17, 2001 at a cost of $420 million.
Aside from the Dallas Mavericks, the NHL's Dallas Stars play their home games at the same venue.
6:40 PMa month ago

For the third time, it is Luka Doncic who is the best on his team with 8.5 assists, while Harden dishes out 9.5 assists per game in the Nets' offense.
6:35 PMa month ago

Rebounding will be key in the game

Although you would think that in the NBA or any basketball league in the world, the leaders in rebounds would have to be the centers, in this case it is very different.
Once again Doncic is the Mavs' leader with 8.1 per game and on the other side is James Harden with 7.9 per game.
6:30 PMa month ago

Duel of scorers on fire

Kevin Durant of the visitors comes in averaging 28.6 points per game and fighting to be named the MVP of the season. However, Luka Doncic is not so far behind the Nets' player, as he has 25.4 points per game.
6:25 PMa month ago

Do not miss a detail of the match with the live updates and commentaries of VAVEL. Follow along with us all the details, commentaries, analysis and lineups for this Brooklyn Nets vs Dallas Mavericks match in NBA 2021.

What time is Brooklyn Nets vs Dallas Mavericks match for NBA?

This is the start time of the game Brooklyn Nets vs Dallas Mavericks of 7th December in several countries:

Watch out for this Dallas Mavericks player

Although he has not had his best start of the season, Slovenian Luka Doncic continues to lead his team with 25.4 points per game, 8.1 rebounds and 8.5 assists that put him as the best in Dallas.
However, criticism from his coach in some games for making bad calls has become commonplace this season. 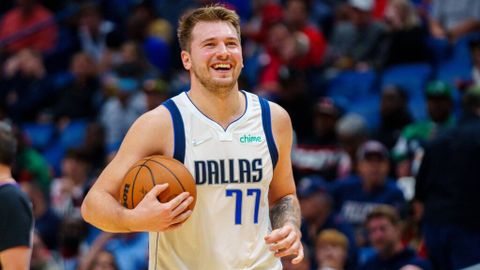 Watch out for this Brooklyn Nets player

Kevin Durant leads the super team that has formed the Brooklyn Nets with 28.6 points per game, 7.7 rebounds and 5.5 assists. Together with James Harden, they have managed to get back on track and meet the expectations of being the best team in their conference.
6:05 PMa month ago

Luka Doncic in doubt for the game against the Nets

The Dallas superstar was not in the previous game that ended in defeat against the Memphis Grizzlies by a score of 97-90, so it will be last minute his participation in the game against Brooklyn.
5:50 PMa month ago

Mavericks off to an uncertain start to the season

The home team has a record of 11 wins and 11 losses, with many question marks after losing last season in the first round of the playoffs to the Clippers.
5:45 PMa month ago

The Nets consolidating their first place

The East Coast team took the first place in the conference as one of the best visitors in the league, with a record of 8 wins and only 2 losses, so this game has to be one more victory to continue as leader.
5:40 PMa month ago

The Eastern Conference leaders with a record of 16 wins and 7 losses visit the southern part of the country when they face the Dallas Mavericks who are sixth in the Western Conference with 11-11.
5:35 PMa month ago

Welcome to VAVEL.com’s LIVE coverage of the 2021 NBA: Brooklyn Nets vs Dallas Mavericks!

Orlando Has A Star Duo In The Making 2 days ago
//