The game ends, the Boston Celtics eliminate the Miami Heat and advance to the NBA Finals.
11:15 PMa month ago

Marcus Smart scores a couple of free kicks and the game is 4 points apart. Time out Miami.
10:53 PMa month ago

Time out Heat, the local coaching staff stops the game to make important adjustments in search of a tie.
10:47 PMa month ago

Bye to the third

Miami fails to take advantage of the third quarter to cut the difference to less than 7 and the period ends.
10:28 PMa month ago

Victor Oladipo with the 3-pointer to get the Heat closer on the scoreboard:

Clutch Dipo 3 on the break 👌 pic.twitter.com/juStYrGo92

Time out Boston, the Heat recovers the pressure and cuts to 7, forcing the visit to stop the game.
10:19 PMa month ago

Just when it seemed that Miami was getting closer on the scoreboard, the Boston team reacted and put up a 14-point difference.
10:07 PMa month ago

We go into the break with an 6 lead for the Celtics.
9:40 PMa month ago

Jimmy Butler with the double and the foul to get the Heat closer on the scoreboard:

Boston and Miami enter a round of baskets for both sides, the difference does not budge.
9:26 PMa month ago

Boston time out, Miami's begin to reduce the difference to 12 points and the visit prefers to stop the rival.
9:21 PMa month ago

End of the first

The first quarter ends, Boston moves further away and puts a 15 difference.
9:07 PMa month ago

Boston maintains the advantage of 10 controlling the Heat that cannot make plays on offense. Second time out for the Heat.
9:06 PMa month ago

Derrick White going through the entire rival defense to get the basket:

Great command from the start of the Celtics to force time out by the Heat. Advantage of 10 for Boston.
8:47 PMa month ago

Start the match at the FTX Arena.
8:26 PMa month ago

We are just minutes away from the start of the presentation of the game and the previous protocols.
8:20 PMa month ago

This is the picture of the Celtics that jumps to the floor for tonight:

Here are the 5 Miami starters for tonight's game:

The Heat team is already warming up before today's game:

Here are the Celtics!

The Boston team is already at the FTX Arena for tonight's duel:

This will be the seventh duel of the series between both teams, the last game ended with a victory for the Heat by a score of 111 to 103 at the TD Garden, now, the series returns to Miami, where the locals will seek to keep it and and to think about the NBA Final.
7:47 PMa month ago

A close match between both teams awaits us, here we share the statistics of the season of each one.
7:42 PMa month ago

We're just under an hour before the Heat vs. Celtics game kicks off at FTX Arena. Both quintets will go out in search of victory. Who will make it tonight? Follow our coverage on VAVEL.
7:37 PMa month ago

In a few moments we'll share the starting lineups for the Boston Celtics vs. Miami Heat, as well as the latest information from the FTX Arena. Do not miss any details of the match with minute by minute and live online from VAVEL.
7:32 PMa month ago

We remind you that the game will be broadcast on television through ESPN and in streaming through NBA League Pass and Star +.
If you want to follow it online, VAVEL is your best option.
7:27 PMa month ago

Jayson Tatum, a must see player!

The Boston guard is leading the team in offense as the team's top scorer and figure with an average of 28.2 points, 5.7 rebounds and 6.0 assists per game. The Celtics star has connected very well with Jaylen Brown and has made the team fit better and better in all possible aspects, he is a very important part of the team's winning streak, but without his scoring partner, his Postseason classification was at risk, with the return of Jaylen Brown and the addition of Derrick White, the Celtics are close to getting into a new NBA Finals.
7:22 PMa month ago

How does the Celtics get here?

The Celtics come to this third duel between both teams after winning the visit and tying the series, the last result was an overwhelming victory by a score of 127 to 102. The Celtics get into the Eastern Conference final after winning the series against Brooklyn by sweep and knock out the reigning champions, the Milwaukee Bucks, in a seventh game. The team has found a very interesting dynamic with a record of 51 wins and 31 losses to end the season in second place in the Eastern Conference. The Boston team has had a hard time finding rhythm on offense and they basically depend on the moment Tatum is going through. The loss of their best scorer has made it difficult for the team to get good results, but this forced players from the second unit to show their full potential and show off their game, players like Grant Williams, Payton Pritchard, Derrick White or Daniel Theis have showed a better level and with this added to the talent of Jaylen Brown they managed to keep the team in a great moment. Since the Brown-Tatum duo returned to the court, they have achieved good victories against difficult opponents but the team has not given up and they have reached the Conference Final.
7:17 PMa month ago

Jimmy Butler, a must see player!

The Heat star is going through a great moment leading the team with 30.5 points, 7.8 rebounds, 5.3 assists, plus 1.8 steals per game. The Miami forward is a fundamental part of what the team can do and his level, added to the ability of other figures, will be of vital importance to see if they are capable of keeping the NBA title. Butler has gotten more and more experience and now he needs to prove it and lead this team to another NBA Finals. Miami is one of the great candidates to win the Eastern Conference title and fight for the NBA title, so far it has shown a great level and has managed to put the team on its shoulders to get its first postseason victories. Now they travel to Boston with the mission of not giving the Celtics a chance and getting away victories to finish the series at home.
7:12 PMa month ago

How does the Heat get here?

Those from Miami arrive after winning the series against the Atlanta Hawks by a score of 4 to 1 and the Philadelphia 76ers by 4 wins to 2. The team has recovered part of what was seen in the 2019-2020 season where they stayed runner-up in the NBA, the addition of Kyle Lowry brought a better offensive generation to the team. Lowry was the missing piece for the Heat and so, with the talents of Jimmy Butler, Bam Adebayo, Tyler Hero and Duncan Robinson, the team is showing great form and finished in first place in the Eastern Conference with a record of 53 wins and 29 losses. At the moment, the biggest concern is the recovery of the rhythm of the game of Victor Oladipo and Markieff Morris, who are important players for the team, but their other figures have gotten the result in the games and are still fighting to advance to the round and be one of them. of the candidates for the NBA title. Now they enter other Eastern Conference finals as the favorites to advance to the NBA Finals, but first they will have to face a great team from Boston.
7:07 PMa month ago

The FTX Arena located in the city of Miami will host this postseason duel between the first and second place in the Eastern Conference, this will be the seventh and last duel of the Eastern Conference Final series. This stadium has a capacity for 21,000 fans and was inaugurated in 1999.
7:02 PMa month ago

Good day to all VAVEL readers! Welcome to the broadcast of the Boston Celtics vs Miami Heat game, corresponding to the 2021-2022 NBA Eastern Conference Final. The meeting will take place at the FTX Arena, at 8:30 p.m. 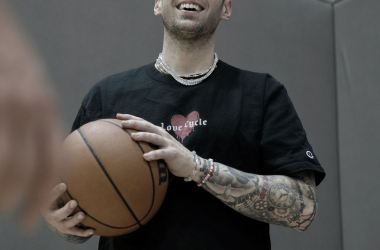 Chris Brickley is on track to go down as the best trainer we’ve ever seen, and here's why 5 hours ago