That was fun, wasn't it? After scorching the Hoyas in the first half, Marquette played itself into an uncomfortably close game at the end, but the Golden Eagles prevailed. It took 23 points and 2 clutch free throws at the end from Luke Fischer and double-digit scoring from five other players. Let's take you back through the final, heart attack-inducing moments via Vine.

D'Vauntes Smith-Rivera hit that jumper to give Georgetown the lead with 3 seconds left. Marquette then would have to take the ball across the length of the court to save itself.

The play was drawn for Traci Carter to attack the man-to-man defense and take the ball to the rim. Georgetown, however, was playing zone. Carter noticed this and threw a long pass through two defenders to Fischer, who drew the foul.

Fischer finished 2-2 on the free throws. After Georgetown heaved a Hail Mary and missed, Marquette celebrated its victory.

It was a pretty cool moment for Wojo and Fischer.

The win over Georgetown wasn't all fun and games. In the second half, Henry Ellenson fell down after a jump shot and somersaulted backwards, writhing in pain. He could barely put any weight on his left ankle and was eventually helped by two people to the locker room. The BMO Harris Bradley Center was dead silent. Ellenson never returned.

The next day, the official Twitter account said that Ellenson suffered a left ankle sprain and that his status is day-to-day.

Ellenson might have indicated in an interview on WISN 12 News that he will play on Saturday. He talked extensively about how important the next game is and didn't count himself out of the contest. His ankle was free from a boot, only bound by a wrap. The transcript of the interview reads: "Marquette's Henry Ellenson is hopeful he can play at Butler tomorrow despite a sprained ankle." The air around Ellenson's injury seems to say he wants to play and might be able to do so. Of course none of these clues are substantial enough to be sure of his status, so we'll have to wait until Saturday to see if he can play. (Watch the full interview)

The outcome of Saturday's game between Butler and Marquette will determine where each team is seeded for the Big East Tournament. The Golden Eagles could finish anywhere from fourth to eighth in the ten team conference. Let's explain what would need to happen for each scenario to occur (credits to Matt Velazquez for explaining this in his article).

Marquette loses to Butler, Georgetown loses to Villanova. (This would be the most likely scenario if Marquette lost.) 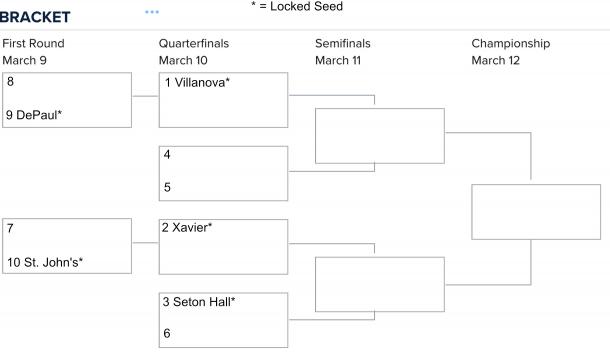 Look at the Big East Tournament bracket above to see how the outcome would impact Marquette's seeding. As you might have noticed, a win over Butler would give Marquette a bye to the quarterfinals. A loss to Butler would place Marquette in the first round to play either DePaul or St. John's. Either way, Marquette would need to get past Xavier or Villanova in its second game if it were to make a run.

If Marquette finishes 9-9 in the Big East, then could it receive an at-large bid to the NCAA Tournament? The answer is no. Marquette dug itself too deep of a hole with its poor schedule and bad losses. A win over Butler in the regular season finale and wins over, for example, Providence and Villanova in the Big East Tournament would boost Marquette's RPI to only about 74th. That's not good enough for a team with a poor non-conference schedule and a mediocre résumé. The only way Marquette will crash the NCAA Tournament is through a Big East Tournament Championship, which is unlikely.

As long as the Golden Eagles stay under about 105th in RPI, Marquette has a good chance at receiving an at-large bid to the NIT. A way to cement its spot in this range would be to beat Butler on Saturday. If Marquette loses to the Bulldogs, however, it risks being left out of the NIT. A loss would seed Marquette either seventh or eighth in the Big East Tournament, and that would mean the only opportunity for another quality win would be through Villanova or Xavier. A loss to Butler, a win over St. John's, and a loss to Xavier for example would not help Marquette.

Will He Stay Or Will He Go?

The only thing that could keep Henry Ellenson at Marquette is his family. His brother has one more year left as a Golden Eagle, and his family could have another year of watching him play in their home state. He also could want to play another year alongside his friends on the basketball team. The point is, however, that these are the only reasons Ellenson would stay at Marquette. His life-long dream has been to play in the NBA. Marquette and Ellenson have understood from the beginning that this has been the goal. They've successfully positioned him to fulfill his dream. Why in the world would he turn it down?

If you're not convinced for whatever reason, then read the excerpts below from Adam Zagoria's interview with Ellenson in November (see the full article).

"For me obviously it's a goal and dream of mine to play in the NBA, but until that time comes I'm going to stay focused on what we have," Ellenson said Wednesday at Big East Media Day at Madison Square Garden. "I haven't played a minute of college basketball yet, so just working hard every day in practice and just getting better is my main focus right now."

Of course, eventually Ellenson's goal is to play in the NBA.

Still not convinced? Read some more.

So you can go to Marquette and not necessarily Kentucky, Duke or Kansas and be a one-and-done type player?

"Yeah, for sure," [Ellenson] said. "Just with the talent across the board it's a strong conference, it's a basketball conference and you don't need [to go to] those programs..I think you can still do it at other schools. It takes hard work, that's how you get there. I haven't played a game yet, so I know just me working hard every day, I can give myself that opportunity."

He's given himself that opportunity. There's little reason why he wouldn't or shouldn't take it.

Patriot League first round recap: Boston U advances past Lehigh behind balanced attack 3 days ago