In a critical rubber match game between the Virginia Cavaliers and North Carolina Tar Heels that saw a total of 27 hits and 24 runs, the Cavaliers used a 6-run fourth inning, plus a 4-run fifth inning, to bounce the Tar Heels 15-9, clinching the series win.

Virginia got a four RBI day from Matt Thaiss who also hit the only home run of the game, a two-run shot in the fifth inning. The Cavaliers also received three RBIs apiece from Daniel Pinero and Cameron Simmons, as well as three hits from Ernie Clement.

UNC put in a strong offensive showing, with Brian Miller leading their 15-hit attack with a 5-5 showing, but it was not enough to defeat the persistent Cavaliers. The Tar Heels had leads of 3-0 and 5-3 early in the game but could not hold on.

North Carolina Gets an Early Jump on Virginia

UNC put a quick deuce on the board to get them jumpstarted in the right direction in the first inning. A walk and two singles loaded the bases with nobody out, giving UNC a huge threat to bust the game open in the first inning. However, Virginia starter Alec Bettinger induced a line drive double play that minimized the threat.

Bettinger, though, could not completely escape the jam as Eli Sutherland ripped a two-run single to stake the Tar Heels to an early 2-0 advantage. Sutherland would finish with 4 RBI. In the second inning, UNC loaded the bases yet again, this time with just one out. However, Bettinger avoided the big inning yet again by allowing a mere sacrifice fly, limiting the damage to just one run.

Virginia rallies in the second inning

The excellent containment job Bettinger did on UNC's huge threats gave the Cavaliers a chance to rally against the thirteenth ranked Tar Heels. UNC starter Jason Morgan personally walked the bases loaded before being replaced with two outs in the second inning. However, another walk scored Virginia's first run, and Thaiss's two-run single knotted the score at three runs apiece.

UNC's sparkplug, Brian Miller, started another rally in the fourth inning, singling with two outs with nobody on base. Consecutive walks loaded the bases for third time in four innings. Logan Warmoth capitalized with a run-scoring single to put UNC back in front. Another walk scored their fifth run of the day. However, Virginia had an answer, with a little help from UNC's wildness.

The inning started innocently with UNC reliever A.J. Bogucki retiring the first two batters of the inning. However, he then proceeded to walk the next three batters to load the bases. Pinero capitalized on the free gifts from Bogucki by slapping a bases-clearing double down the left field line. Bogucki was replaced but reliever Spencer Trayner promptly walked two men and surrendered a three-run double of his own, this one to Simmons. By the end of the inning, Virginia had staged a 6-run, two-out rally with just two hits and 5 walks by UNC pitching.

The Cavaliers tacked on four more runs in the fifth inning to put the game out of reach. Thaiss hit a two-run bomb to extend the lead to six runs and Charlie Cody chipped in with a single to plate two more runs that gave Virginia a whopping 13-5 lead!

UNC Chips Away but Massive Deficit Is Too Much

UNC staged a mini-rally in the sixth inning but the deficit was far to big to overcome. The red-hot Brian Miller tripled to begin the inning and scored on a RBI single from Tyler Ramirez. Ramirez came around to score on an error later in the inning to cut the deficit to 13-7.

Kyle Datres knocked in one more run the sixth inning on a sacrifice fly. However, Virginia had more answers, notching another run in the bottom half of the frame. They tacked on an unearned run with two outs to restore a six-run lead. The teams traded runs late in the game, and Virginia walked away the winner.

This series was a critical one as both teams tried to prove themselves legitimate contenders in both the ACC and nationally. Of course, we know the regular season doesn't always display a team's full potential - just look at these same Cavaliers from 2015 when they won the national championship after finishing seventh in the ACC.

However, both teams want to be in a good position heading into this year's tournament. Virginia's win was a big one as it moved them into a second-place tie with the Tar Heels in the ACC's Coastal Division. At 9-9 in the conference, both teams sit three games back of the #1 Miami Hurricanes. There are 4 weekends of conference play remaining.

The series win should also bump Virginia back into the rankings. The Cavaliers are officially unranked, but sat at #25 in many polls entering this weekend. This is a statement win for Virginia, who is looking to prove that their tournament run last year was not a fluke. They'll get a chance to move into a tie for first place in the Coastal Division next weekend, but they'll have to sweep Miami to do it. Meanwhile, UNC travels to Wake Forest, who surprisingly won a series from the #4 Florida State Seminoles this weekend.

Atlantic 10 tournament second round recap: Favorites win in Richmond a day ago

Patriot League first round recap: Boston U advances past Lehigh behind balanced attack 2 days ago 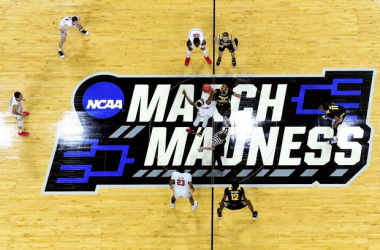 2021 March Madness will be played in Indianapolis 2 months ago
//