Duke has suspended Grayson Allen indefinitely after being assessed a technical foul for tripping Elon’s Steven Santa Ana in the Blue Devils’ 72-61 over Elon at the Greensboro Coliseum. Santa Ana drove past Allen in the first half, and Allen stuck his leg out sending Santa Ana to the floor. The 21-year-old was clearly upset with the call showing frustration on the bench. He was benched for the start of the second half of the game before coming in.

After the game, the Jacksonville, Florida native was quite remorseful. He was seen in tears in the locker room and did apologize to both Santa Ana and Elon coach Matt Matheny. 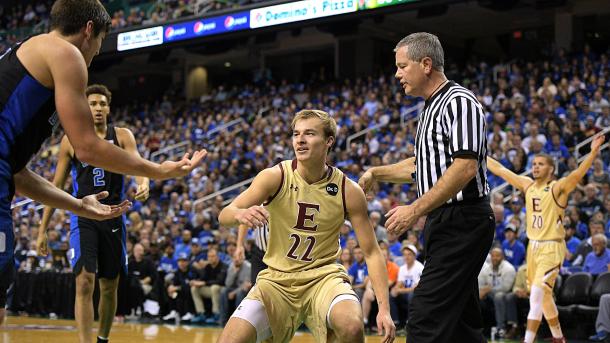 This is Allen’s third tripping incident this year and was not punished for either of them. The first came last year at home - Louisville. He intentionally tripped Raymond Spalding of Louisville on February 8, 2016. Just over three weeks later, he tripped Florida State’s Xavier Rathan-Mayes in the closing seconds of their home win over the Seminoles. The ACC stepped in and sent him reprimanded for the incident.

After the game, Duke head coach Mike Krzyzewski said that the incident was unacceptable and that it was right for Allen to apologize in person. Here’s what he had to say after the suspension was announced, “We have had the opportunity to thoroughly review the incident involving Grayson Allen from last night's game against Elon. As I stated last night, the incident was unacceptable and inexcusable. He took an important step last night by apologizing in person to Steven Santa Ana and Coach Matt Matheny. As a program, we needed to take further steps regarding his actions that do not meet the standards of Duke Basketball. To that end, we have determined that Grayson will be suspended from competition for an indefinite amount of time."

He said last night that Allen took away from the game and the team by becoming a distraction. An ACC official said that they have the right to review the play and add further punishment if warranted despite not being an ACC game.