12.7: SC throws ball off Zags, Gamecocks have one last hope, down by three.

Final Minute of the game

1:45: Dozier driving, loses the ball, referees questioning who the ball was off of last. Looks like Williams-Goss was last to touch it.

Nigel Williams-Goss earns Capital One Player of the Game for his dominate performance in the first half.

4:44: Karnowski leads a 7-0 run for the Bulldogs, grab your popcorn kids, this game is just starting to heat up, timeout SC.

7:41: Dozier gets his own rebound and hits easy lay in to tie game at 65, we have ourselves a ball game folks!

8:40: Felder fouled by Melson, Zags in the bonus, one and one, misses but off Williams and out of bounds.

15:51: Gonzaga calls timeout, Matthews was trapped in the corner.

0.0: First half ends, Melson a fraction of a second late from extending the lead by three, 45-36 Gonzaga, end of the first half.

5:26: Chris Silva hits tough layup and stuffs Karnowski goes down, Silva hit him in the face on the follow through, 31-31.

8:20: Melson makes huge block on Felder which starts the break leading to a foul, Williams-Goss hits both, 24-19 GU.

6:00 PM: 10 minutes till tip-off, South Carolina's star player Sindarius Thornwell is 100% after dealing with flu like symptoms throughout the week.

5:30 PM: Both team's fans are starting to pile into University of Phoenix Stadium. 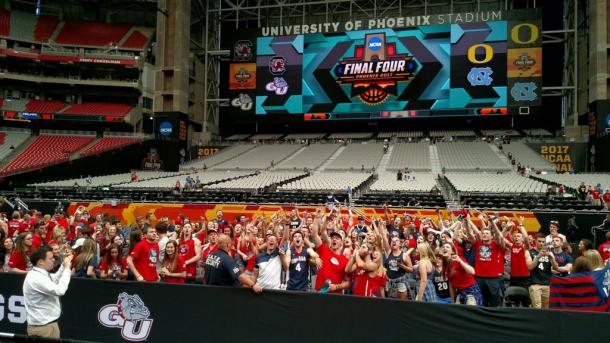 12:00 PM: The Gonzaga Bulldogs and South Carolina Gamecocks are set to battle for a spot in the national championship. Both team's star players, Nigel Williams-Goss and Sindarius Thornwell will look to lead their team's to their first national championship appearance in school history.

South Carolina's road to the final four has been an amazing story involving multiple big upsets. They kicked off their tournament by beating No. 10 seed Marquette pretty easily, next they faced the heavy favorites, Duke in the round of 32. Although Duke lead for a good portion of the game, South Carolina took off in the last quarter to win the game. Following their massive upset, they faced No. 3 seed Baylor, another team that was expected to blow out South Carolina. Once again, the Gamecocks would prove themselves to be legit, beating the Baylor Bears in the sweet sixteen and advance to the elite eight where they faced No. 4 Florida. South Carolina would punch their ticket to Phoenix in another big win over heavily favored Florida. They look to ride their unstoppable wave of momentum all the way to the championship with only two teams left in their path.

As for Gonzaga, the No. 1 seed, they have played well in all of their games thus far. The only close matchup came in the elite eight where they faced No. 4 seed West Virginia, the game came down to the finally possession and ultimately, it was the Bulldog's stingy defense that came through and won them the game. To reach the final four, the Zags had a tough matchup against an unlikely opponent, No. 11 seed Xavier. Gonzaga was able to control the tempo for most of the game and ultimately win, securing the team's first final four appearance in school history.

Hall of Famer Coach, John Thompson Dies at 78 3 months ago