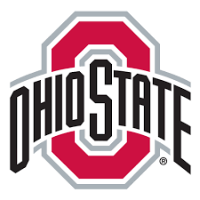 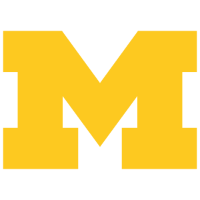 The Buckeyes win The Game yet again and end up dominating their arch-rivals Michigan by the end, winning 56-27 and extending their winning streak to eight games with a beatdown in The Big House in Ann Arbor. Ohio State remains undefeated and will look to lock up their spot in the College Football Playoff next week in Indianapolis in the Big Ten Championship game.
4:39 PM10 months ago

Poor pass from Patterson and Buckeyes defender Amir Riep picks it off to add insult to injury for Michigan.
4:34 PM10 months ago

The Buckeyes are just laying it on Michigan at this point, giving it to JK Dobbins again for a 33-yard rushing touchdown.
4:27 PM10 months ago
This game has seen some extremely questionable calls, mainly going towards Ohio State, throughout the game and just accentuated by a terrible call on review reversing targeting on a Buckeyes defender and not even giving an obvious basic personal foul penalty on the play. Michigan's players starting to get frustrated.
4:16 PM10 months ago

The Buckeyes put likely the final nail in Michigan's coffin and keep laying it on the Wolverines with a Justin Fields touchdown pass 16 yards to Austin Mack before a good PAT extends the lead.
4:12 PM10 months ago
Michigan's Tarik Black misses the first down marker and Hassan Haskins gets stuffed by the Buckeyes defensive line on fourth down and the Wolverines turn the ball over on downs deep in their own territory to Ohio State.
3:59 PM10 months ago

Michigan gets something going in this second half with a two-yard Hassan Haskins rushing touchdown out of the wildcat before Haskins punches it in again on the wildcat for the two-point conversion to make it a two-possession game.
3:51 PM10 months ago
That's the end of the third quarter here in Ann Arbor, with the Buckeyes leading Michigan 42-19.

Fourth quarter from Michigan Stadium coming up next.

Michigan's offense under Jim Harbaugh and Josh Gattis comes up empty off great field position in the redzone from an Ohio State muffed punt and again questionably settles for three points and a good Quinn Nordin field goal.
3:43 PM10 months ago

Buckeyes punt returner Garrett Wilson muffs the punt and Michigan recovers it for an apparent touchdown but the referee rules a muffed punt cannot be advanced so the Wolverines get the ball in the redzone with great field position!
3:36 PM10 months ago

Coming straight out of the Ohio State sideline medical tent, Fields flashes his brilliance with a 30-yard touchdown pass to Garrett Wilson. Looks like his injury is just fine.
3:34 PM10 months ago

Fields has returned to the game and is in with a knee brace on his knee.
3:33 PM10 months ago

An odd hit and fall from Buckeyes quarterback Justin Fields has forced him to leave the game for now and go into the medical tent on the sideline.

More details to come but backup Chris Chugunov is in the game for OSU.

The Buckeyes begin the second half with another score, continuing to shred the Michigan defense under Don Brown with a six-yard Fields touchdown pass to KJ Hill.
3:27 PM10 months ago
The second half is underway and Ohio State receives the ball and begins on offense!
2:41 PM10 months ago
That concludes the first half of football here in The Game at Michigan Stadium in Ann Arbor, Michigan!

The Buckeyes will receive the ball first to start the next half.

Costly questionable call again goes against Michigan as the referee calls a touchdown back due to apparent lack of control from Donovan Peoples-Jones and Jim Harbaugh again questionably goes for the field goal on fourth down and only gets three points from Quinn Nordin.
2:28 PM10 months ago

Another very lucky break for Ohio State as a costly off-sides penalty from Michigan on a fourth-down punt gives the ball back to the Buckeyes. Justin Fields capitalizes and OSU scores another touchdown on a five-yard JK Dobbins running touchdown.
2:18 PM10 months ago

Bad luck for the Wolverines as a gust of wind takes the snap from Patterson and lands in the hands of a Buckeyes defender, costing Michigan points in the red zone. Huge break for Ohio State.
2:12 PM10 months ago

Another score for Ohio State with JK Dobbins continuing to be the Buckeyes go-to on a six-yard running touchdown to extend the lead.
2:11 PM10 months ago
Some questionable officiating calls so far from today's referees, missing a few questionable pass interference calls and a delay of game for Ohio State.
2:10 PM10 months ago
That's the end of the first quarter here in Ann Arbor, with the Buckeyes leading Michigan 14-13.

Quarter two from Michigan Stadium coming up next.

Michigan comes right back with a score of their own, tricking the Buckeyes defense twice and ending it with a 25-yard passing touchdown from Patterson to Donovan Peoples-Jones before Nordin makes the PAT to make it a one-point game.
1:48 PM10 months ago

The Buckeyes get lucky off a broken coverage from Michigan's defense and Justin Fields darts it 57 yards downfield to Chris Olave for another touchdown.
1:22 PM10 months ago

Ohio State comes right back with a scoring drive of their own, getting some good luck off a fumble bounce from running back JK Dobbins before Dobbins runs it in five yards on the ground for a touchdown. The extra point is good and the Buckeyes take a narrow one-point lead.
1:15 PM10 months ago

Electric start from quarterback Shea Patterson and the Wolverines offense, hitting a few short throws before an end-around run by Giles Jackson results in a 22-yard touchdown run! Michigan gets on the board first in the first drive of the game but kicker Quinn Nordin misses the extra point.

Ohio State will get their first shot on offense next when they get the ball!

The Buckeyes are in The Big House!

Michigan's resurgence on offense and defense has been a surprising, largely unprecipitated one, led by increased production from Patterson and improved aggression in man-to-man from Don Brown's defense. Following a slow start to the season with a sluggish opening game against Middle Tennessee and a close, overtime call against Army at home before a thumping on the road at Camp Randall against Wisconsin, the Wolverines have turned the season around following their second loss to Penn State, crushing rivals Notre Dame at home and not looking back since. One of the keys have been their standout group of athletic wide receivers: Donovan Peoples-Jones, Nico Collins, Ronnie Bell, and Tarik Black in addition to a stronger role for running back duo of Hassan Haskins and Zach Charbonett in the offense.

The key for Michigan in this huge rivalry game against the Buckeyes if they want to even keep it close, let alone pull the upset against their nemesis, will be allowing Patterson to use his strong arm with the Wolverines' great set of receivers, opening up the offense and getting the ball out quickly before the Buckeyes' defensive line and Chase Young can pressure and sack the quarterback. Don Brown's defense will also be crucial to keeping it a low-scoring game for Harbaugh and his quarterback Patterson, needing to avoid the big plays that decimated them in man-to-man coverage last year against Ohio State and contain Fields and Dobbins on the ground.

Rising to number one in this week's College Football Playoff rankings following their best win and biggest test of the season yet last week at home in The Horseshoe against rival Penn State, the Buckeyes are brimming with confidence following a brilliant performance from three of Ohio State and head coach Ryan Day's biggest stars: quarterback Justin Fields, running back JK Dobbins, and star defensive end Chase Young in his first game back following a two-game suspension for a violation of NCAA rules. The Buckeyes put a hurting on Michigan last season in a blowout in Columbus and will hope to do the same thing to their hated arch-rivals again this year in Ann Arbor, looking to stop Shea Patterson's success with Young's ferocious pressure and sack game while once again tearing up Don Brown's defense with Fields' running ability and Dobbins' strong runs up the middle.

A hidden weapon for Fields and Ohio State could be wide receiver Chris Olave who enjoyed a standout game last week against the Nittany Lions and can win contested deep balls with Michigan's defenders in their trademark man-to-man coverages. Sitting at 11-0 and already going to their conference championship game, the Buckeyes likely could still lose this game and make the College Football Playoff with a win in the Big Ten Championship game against Big Ten West champion Wisconsin or Minnesota but the Buckeyes will be desperate to remain unbeaten and crush their nemesis once again in their own house.

Possibly the biggest, most highly-anticipated, and best rivalry in all of college football headlines Rivalry Weekend as The Game heads to Ann Arbor this year for a big Big Ten battle between arch-rivals number one Ohio State Buckeyes and the number 13 Michigan Wolverines in the marquee game of the week and in the Fox Big Noon Saturday game. After last year's embarrassing 62-39 beatdown in The Shoe in Columbus, Jim Harbaugh's Michigan Wolverines are looking for revenge and their first win against the Buckeyes in The Game since 2011 and the first in the Harbaugh era in Ann Arbor. While many predicted Michigan to win the Big Ten East this year and finally defeat Ohio State, the Buckeyes have become the most dominant and complete team in college football, and right now the best as well, already winning another Big Ten East championship and punching their ticket to Indianapolis for next week's Big Ten Championship game.

Ohio State's Ryan Day has created a brilliant team this season in nearly ever area, far exceeding expectations and making it a tough task for Michigan to hang with on Saturday. Harbaugh's team fortunately is playing their best football of the year the last month and a half following a second-half rally in a loss on the road to Penn State and quarterback Shea Patterson is executing new offensive coordinator Josh Gattis' offense brilliantly putting the Wolverines in as good a position as they could wish for to pull the upset against an incredibly-talented Buckeyes team. Michigan is also back at home in The Big House- where they have played markedly better football than on the road over the course of Harbaugh's tenure- and defensive coordinator Don Brown's vaunted defense is firing on all cylinders again as the Ohio State game nears.

How to watch Ohio State vs. Michigan Live TV and Stream

If you want to watch the game on TV, your options are: Fox to broadcast.

If you want to directly stream it: Fox Sports Live.

The Ohio State vs. Michigan game will be played at Michigan Stadium in Ann Arbor, Michigan. The kick-off is scheduled at 12 PM ET.
8:55 PM10 months ago
Welcome to VAVEL.com’s LIVE coverage of 2019 The Game: Ohio State Buckeyes vs. Michigan Wolverines!

The Citadel Bulldogs vs. Clemson Tigers: Live Stream Online TV Updates and How to Watch 2020 College Football (0-49)9 days ago